'Nature’s not closed' during coronavirus, but should you still go hiking? 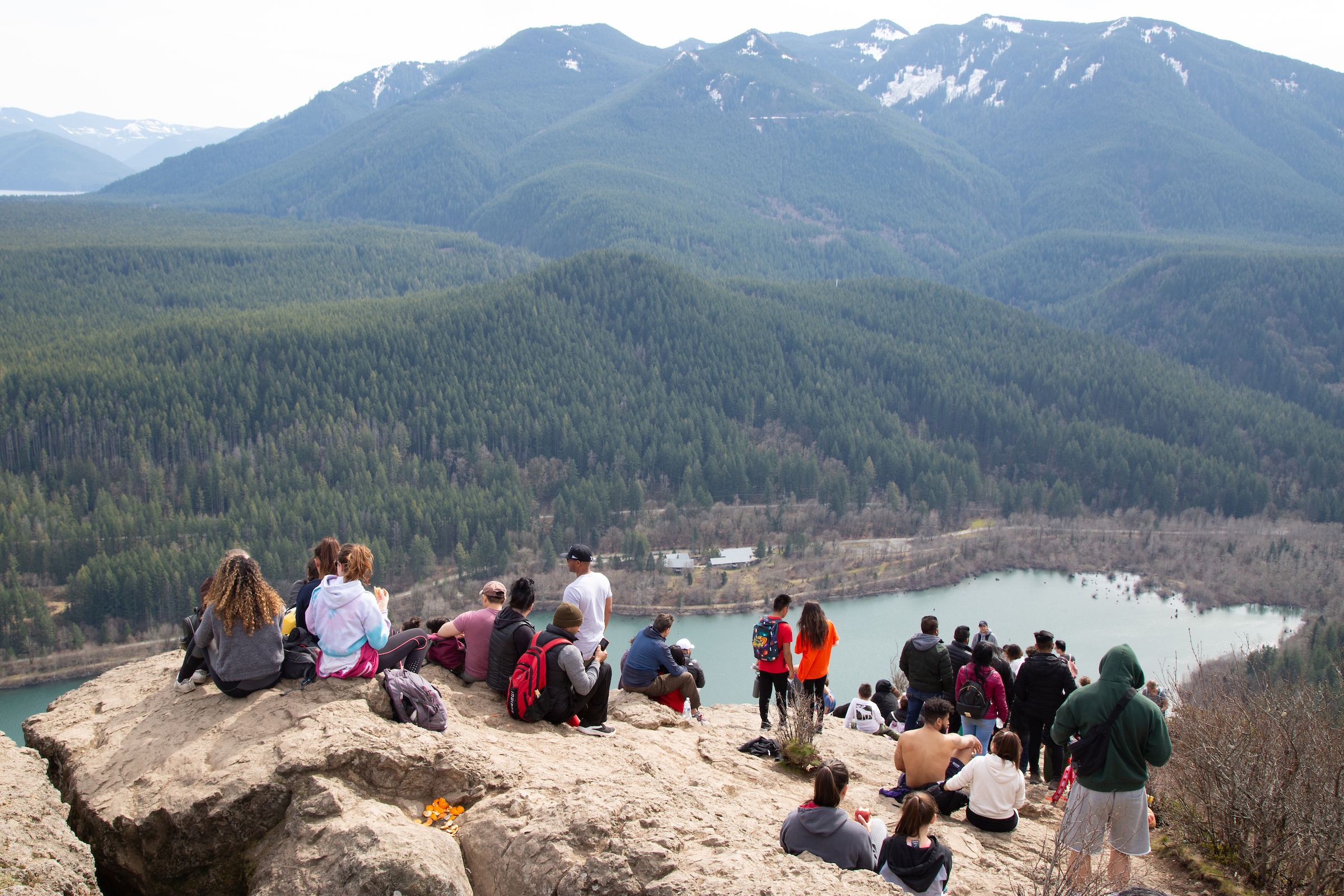 Rattlesnake Ledge in North Bend is busy with hikers, March 22, 2020. Local officials have urged residents to stay inside or to stay 6 feet away from each other when outside to prevent the spread of COVID-19. (Jen Dev/Crosscut)

UPDATE: The Nature Conservancy closed all access to its lands as of March 24. The Washington Department of Fish and Wildlife is closing all wildlife areas and water access to the public as of March 25, and the Department of Natural Resources will close all public access to state lands starting March 26.

On March 15, Daniel Shinwoo Kim posed atop Mailbox Peak with a roll of toilet paper streaming from his raised ice ax. He had heard a rumor from hikers descending from the summit that our national toilet paper paranoia had extended even to Washington’s trails, with an unknown Samaritan placing two rolls in the mailbox at the top.

Kim, a project coordinator with Outdoor Asian, was there to teach a friend mountaineering skills. That Sunday, he overslept, arrived at the popular Mailbox Peak trailhead about 10 a.m. and drove in circles for 30 minutes before finding a spot to park. Social distancing was an expectation but not a universal reality; Gov. Jay Inslee hadn’t yet limited restaurants and bars to serving takeout orders only.

How else does the stay-at-home order affect your life? We're answering reader questions.

“Last week, I still feel like people were not taking this [pandemic] seriously, and it didn’t become serious in Washington until a few days ago,” says Kim. “When I was up there, I kept to myself mostly, but you had a lot of groups together hugging.”

Inslee’s newest order, issued Monday, tells Washingtonians to stay home for all “nonessential” reasons and bans gatherings of any kind. Hiking is explicitly allowed so long as appropriate social distancing is practiced.

Even so, area hiking organizations stress that just because trails are open does not mean that this is a perfect time for a long-distance family road trip.

“Nature’s not closed, but staying closer to home is the best choice,” says Kindra Ramos, director of communications at the Washington Trails Association.

The association recommends hiking only with family or roommates, going to urban parks at off-hours to limit crowding and staying close to home to reduce the need to stop for gas or snacks, which risks transmitting the virus in small communities that lack the health care infrastructure to deal with it.

Following Inslee’s order, the association went a step further by urging people to stick to their neighborhoods: “If you're trying to decide where to go, consider this rule of thumb: if you have to drive to the trailhead, it's probably too far.”

This story was driven by ideas from readers like you.

Around the country, gateway communities surrounding national parks have been vocal about how an influx of tourists threatens the well-being of their towns. But local sentiment hasn’t always matched official policy: On March 18, Secretary of the Interior David Bernhardt waived national parks entry fees and encouraged Americans to visit them. Two days later, Rocky Mountain National Park shuttered indefinitely after the mayor of neighboring Estes Park pleaded with Bernhardt to close it. Estes Park has fewer than 7,000 residents and confirmed its first positive COVID-19 case the day after the parks waived fees.

Yosemite and Hawaii Volcanoes National Parks have also closed, and the towns around Yellowstone are calling for the same.

As of Tuesday, the gates to some of Washington’s national parks are closing, too. Mount Rainier shut down the Longmire Museum and the visitor center at Paradise on March 19, and Tuesday it closed its Nisqually entrance entirely and banned all vehicle traffic in the park. But the park backcountry is still open to hiking and winter camping, and snowshoeing and cross-country skiing are still allowed at the northeast and southeast entrances. The move followed a busy weekend that alarmed gateway communities.

On Friday, Drew Yates, a supervisor at Whittaker Mountaineering in Ashford, said the staff had noticed an increase in traffic among people headed to Mount Rainier from Seattle, Tacoma and Olympia.

“All day, the majority of the people that have come in are like, ‘We’re sick of being cooped up,’” Yates said.

“A little community like us, so far away from a hospital, we can’t handle it if it comes out here,” he said.

Even young, healthy-seeming recreationists can be carriers for the virus without knowing it. A 29 year-old Washington splitboarder, Ryan Irvin, learned this the hard way when he tested positive for COVID-19 after spending the weekend of March 15 on a ski retreat in the Central Cascades with 20 other people. In an essay for Backcountry Magazine, he urges others to take the pandemic seriously, and says that if he’d known he was a carrier, he never would have left home.

Experts say long-distance thru-hiking plans should be delayed this year, too. Backpackers on long-distance trails like the Pacific Crest Trail and the Appalachian Trail often spend a great deal of time in close quarters with other hikers, and could endanger the small towns they pass through while gathering supplies. The Pacific Crest Trail Association has urged hikers to stay home.

At the state level, Washington closed all campgrounds until at least April 30 and Wednesday closed trails and parks entirely for at least the next two weeks. A press release said the change comes in direct response to Inslee’s stay-at-home order. A volunteer camp host in Bay View State Park in Skagit County also tested positive for COVID-19 on Friday. Other states had already taken more stringent measures. Illinois closed all state parks — including trails — on March 16, and Oregon did the same Monday.

The number of people in Millersylvania State Park “probably increased tenfold” over the past several weekends, says office assistant Ann Grabler. The campground at Millersylvania was completely full on Friday.

“All of those people have to use the restroom at some point,” says Grabler. And because the state parks receive sanitizing supplies from a company that also supplies the health care industry, they’re having trouble resupplying.

The Seattle Department of Parks and Recreation Tuesday announced the closure of parking lots at eight major city parks, closed all beaches to gatherings and shut down access to the popular Rattlesnake Ledge Trail near North Bend. The city has kept parks, trails and restrooms open, but only for activities like walking and cycling that can be done without gathering in groups. Playgrounds and courts are closed, and police patrolling parks are reminding people to keep their distance from each other. The city is urging residents to visit green spaces in their neighborhoods.

The U.S. Forest Service, which can’t reasonably close its vast network of logging roads and trails, has put signs on the doors to many of its restrooms warning visitors that “we cannot guarantee COVID-19-free environments.”

The virus has been found to survive on plastic and stainless steel surfaces for two to three days, but it doesn’t hang around for more than a few hours as droplets in the air. Albert Ko, a Yale epidemiologist, told NPR last week that the better airflow outdoors reduces the risk of transmission — so long as people exercising outside keep at least 6 feet away from each other.

To help facilitate this, Lee Jacobson, who founded the 131,000-member Facebook group Washington Hikers and Climbers, says his group is trying to discourage people from congregating on the area’s most popular trails. Jacobson says he’s been getting up to 30 times as many private messages as usual asking about hiking guidelines or sharing photos of overly busy trailheads.

“It’s complicated by the fact that, in some sense, hiking is probably good for you right now,” Jacobson says. “It’s not good to be cooped up indoors all the time, from a mental health perspective.”

But after successive weekends of crowds on popular trails, Jacobson explains that the group has gotten more serious about its recommendations. On March 22, Jacobson and the other admins stopped allowing anyone to solicit ideas for hikes on the page, and they’re considering a moratorium on all posts showing or discussing anyone hiking anywhere in Washington.

“At this time, we implore you, unless you are absolutely certain you can find a location to hike where you can practice strict ‘social distancing’ protocol, please stay at home or in your neighborhoods,” they wrote Sunday.

“Even if you can find a location that is empty or near-empty, consider staying home anyway.”