Gov. Jay Inslee banned gatherings of over 250 people in the state's three most populous counties. 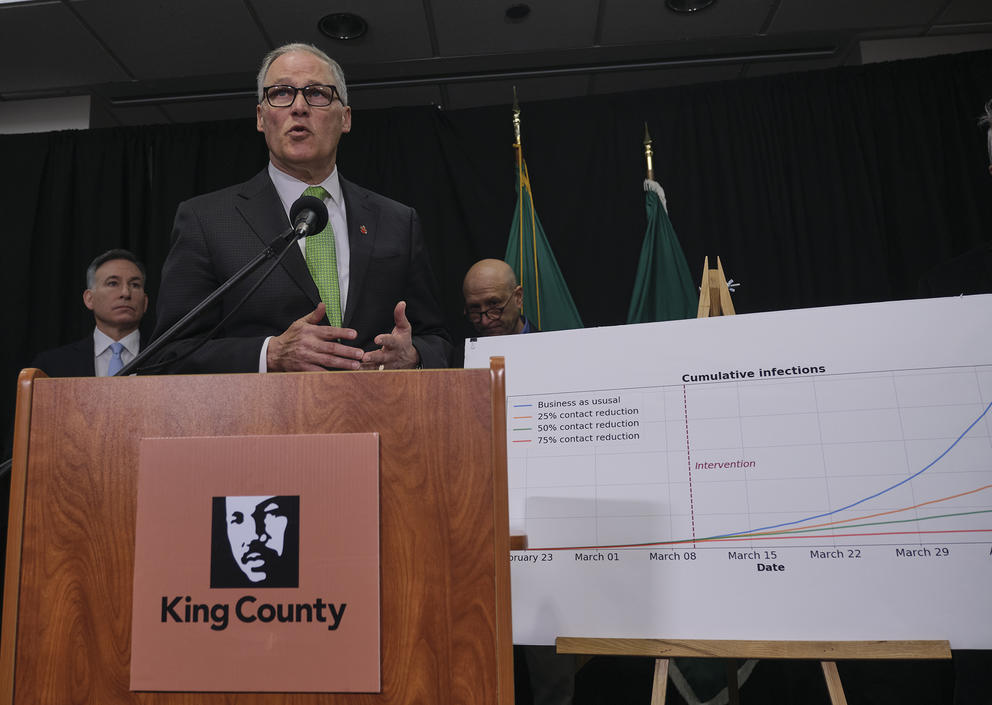 Washington Gov. Jay Inslee talks to reporters on March 11, 2020, during a news conference in Seattle. In efforts to slow the spread of the coronavirus, Inslee announced a ban on large public gatherings in three counties in the metropolitan Seattle area. The vast majority of people recover from the new coronavirus. According to the World Health Organization, most people recover in about two to six weeks, depending on the severity of the illness. (Stephen Brashear/AP)

To contain the spread of COVID-19, Washington state is turning to a technique rarely used in the century since the Spanish flu killed nearly 700,000 Americans — mandatory social distancing.

“These are tools from the past that still work,” said Julie Fischer, a professor at Georgetown University's Department of Microbiology and Immunology. “We just haven’t had to use them in a long time.”

Gov. Jay Inslee announced Wednesday he is prohibiting gatherings of over 250 people in King, Pierce and Snohomish counties, a nearly unprecedented move in peacetime liberal democracies and one that represents a significant escalation in the effort to contain the new coronavirus. The policy is set to last until the end of the month, but will likely be extended, he said.

The steps are necessary to control the COVID-19 outbreak, said Dr. Jeff Duchin, health officer with Public Health — Seattle & King County. He called it the “infectious disease equivalent of a major earthquake that will shake us for weeks and weeks.”

Mandating social distancing, while uncomfortable, can slow the disease’s spread and ease the impact on hospitals and the vulnerable public, Duchin said.

The move comes as countries across the globe reckon with the health, economic and cultural impacts of the new coronavirus. In a country and region that puts a premium on freedom of movement and civil liberties, officials acknowledged that establishing and enforcing such a measure is dramatic. But it’s a sacrifice that is necessary, they said in a crowded press conference.

“It is clear that our state needs a more vigorous and more comprehensive and more aggressive position if we are going to slow the spread of this epidemic,” Inslee said.

The number of COVID-19 cases in the United States has exceeded 1,000 — a number that’s likely more reflective of an increased ability to test than it is the actual number of cases. Nowhere has been hit harder than Washington state, which has so far seen at least 273 cases and at least 24 deaths. Without additional steps, said Duchin, the cases could double every week.

Although police would not be raiding large events, Inslee and others were clear the measures were legally binding and they expected residents would comply. “The penalties are you might be killing your granddad if you don’t do it,” Inslee said.

In recent days, a more wide-ranging effort to ensure social distancing started to feel inevitable. Italy this week restricted movement across the country, the first outside of China to implement such strict measures. In New York, Gov. Andrew Cuomo implemented a one-mile, two-week quarantine in New Rochelle, which has seen a high concentration of COVID-19 cases.

On Wednesday, San Francisco announced restrictions on gatherings of over 1,000 people.

Unlike China, however, Washington does not live under authoritarian rule, and citizens are not used to such broad prohibitions. Taking such a step is “unprecedented,” officials acknowledged, but one they expected Washingtonians to comply with.

“This is an order,” Inslee said. “If somebody is consciously avoiding it, willfully, and the state knows about that, there are measures to have legal means to stop that from happening. But I don’t believe people are going to do that.”

Hugh Spitzer, a law professor at the University of Washington, said “governments have always had this ability to take strong action when there are catastrophic events.”

In the early 20th century, during a tuberculosis epidemic, Seattle opened the Firland Sanatorium in what is today the city of Shoreline and picked up people to be quarantined there.

“It just happens all the time, I mean, throughout history,“ Spitzer said, adding that the public has learned to take public health for granted because the medical community has generally been so successful in preventing disease.

“If you don’t do this, then the whole community dies, so you simply have to be able to do it,” Spitzer said. “I’m not saying I don't think there will be lawsuits, but I don’t think they’ll be successful.”

Fischer, the Georgetown professor, said one of the challenges with preventing the spread of COVID-19 is that it’s a brand new infection.

“None of us have preexisting immunity. Everyone is susceptible to being infected,” Fischer said.

The newness of the virus also means the medical community hasn’t had time to develop vaccines or medicines. That’s where old-school tools such as social distancing and a prohibition on large gatherings comes in, Fischer said.

“We certainly don’t love as a people having authorities make decisions where we feel don’t have input,” Fischer added. But Fischer said she’d rather have people be irritated than take chances at a time like this.

In addition to the governor’s order, Duchin issued a proclamation Wednesday prohibiting gatherings of fewer than 250 people in King County, unless those events could ensure proper social distancing between attendees — including providing hand sanitizer and allowing 6 feet between people. King County Executive Dow Constantine said restaurants and bars should continue to welcome patrons “If they are able to meet this criteria.”

Shortly after Inslee’s press conference, Seattle Public Schools said it was closing for two weeks its 113 schools, which have nearly 56,000 students.

Transportation systems, such as ferries, buses and trains, will function normally, but with additional advice related to social distancing.

Almost all other congregations of people — including personal events like large weddings — will be banned. “Parades, concerts, festivals, conventions, fundraisers and other activities of that dimension are prohibited,” Inslee said.

Additionally, the Port of Seattle announced Wednesday that it was canceling the first two cruise ship sailings in early April.

The governor and other officials acknowledged the gravity of the actions and said the order would likely expand soon.