Leases canceled from the Department of Natural Resources are hurting ranchers. But a new bill would compensate those forced off public land for more profitable uses. 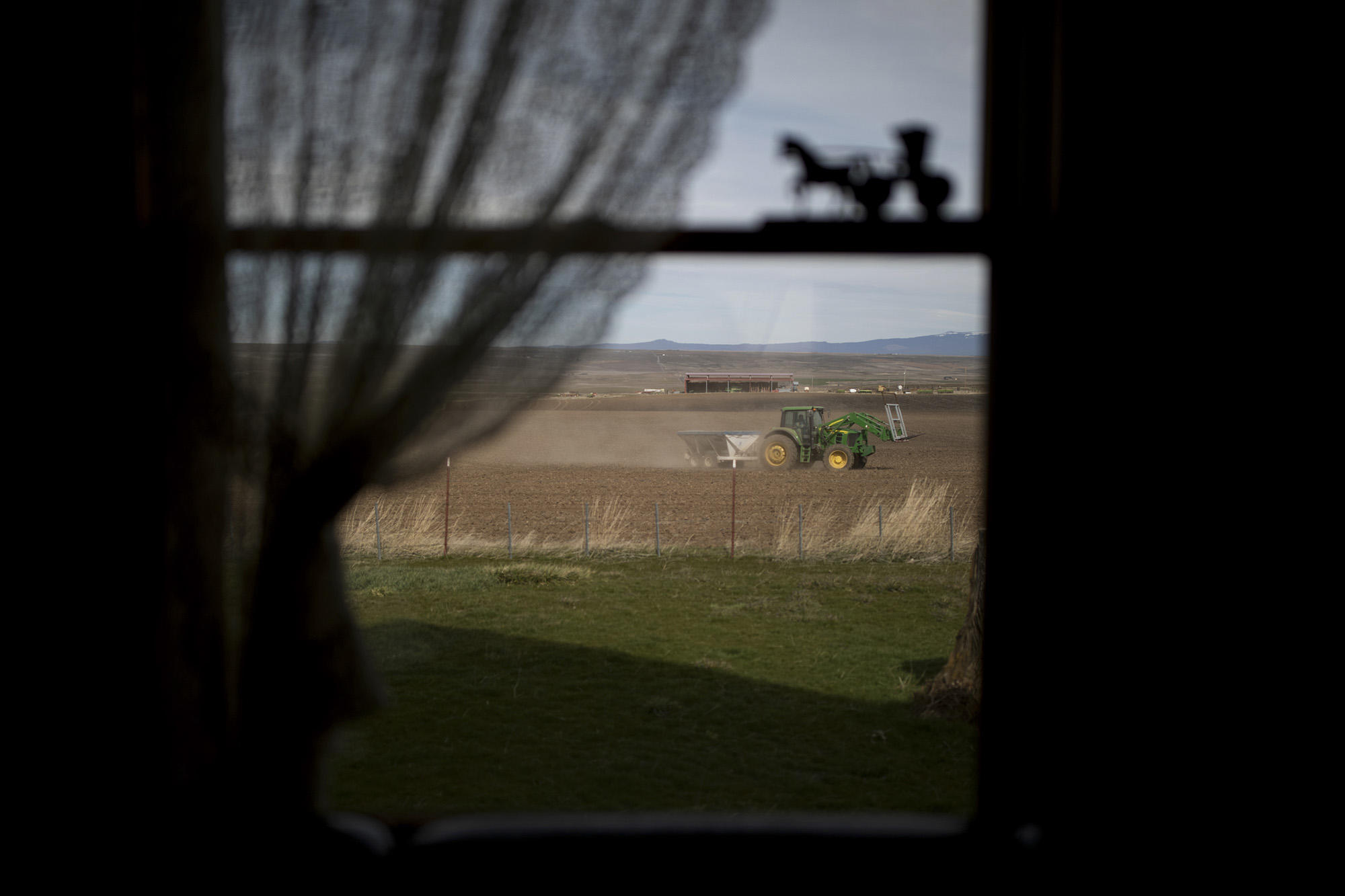 A view of the Fernandez ranch outside Centerville, Klickitat County, near the Columbia River Gorge, as seen on March 5, 2020. Ann Fernandez’s two employees were working to move sheep in preparation for lambing season to begin. Fernandez and her husband, Max, raised sheep on the ranch for decades. Max died in late 2018, and within a month Ann was having to battle the state on a land-lease agreement. She now runs the ranch by herself with the close help and support of two employees, who primarily look after the herd of sheep. (Kristina Barker for Crosscut)

From her ranch in Klickitat County,  less than an hour by country roads across the Columbia River from Oregon, Ann Fernandez loves to watch the sunrise. The windswept grasslands reminded her late husband, Max, of the ranch he grew up on near Punta Arenas, Chile: Mount Adams looms prominent on the northwest horizon, and storms can be seen gathering far in the distance.

The open land and wide, brilliant sky make the Fernandez Ranch and much of the surrounding county prime territory for grazing sheep and cattle, which the Fernandezes have done for decades. But ranchers, farmers and state agencies are all learning that these same features make the area ideal for renewable energy projects, too.

For decades, Max and Ann Fernandez also leased a couple hundred adjoining acres for their animals to roam from the neighboring landowner, the state Department of Natural Resources. But in 2018, the state agency informed them that their 10-year lease was being canceled so the land could be rented out to a higher-paying tenant: ideally, a solar farm that would connect to nearby high-transmission lines. When Max died from a sudden illness in October of that year, 79-year-old Ann was left with the responsibility of removing livestock, fencing and equipment from the land they had leased. 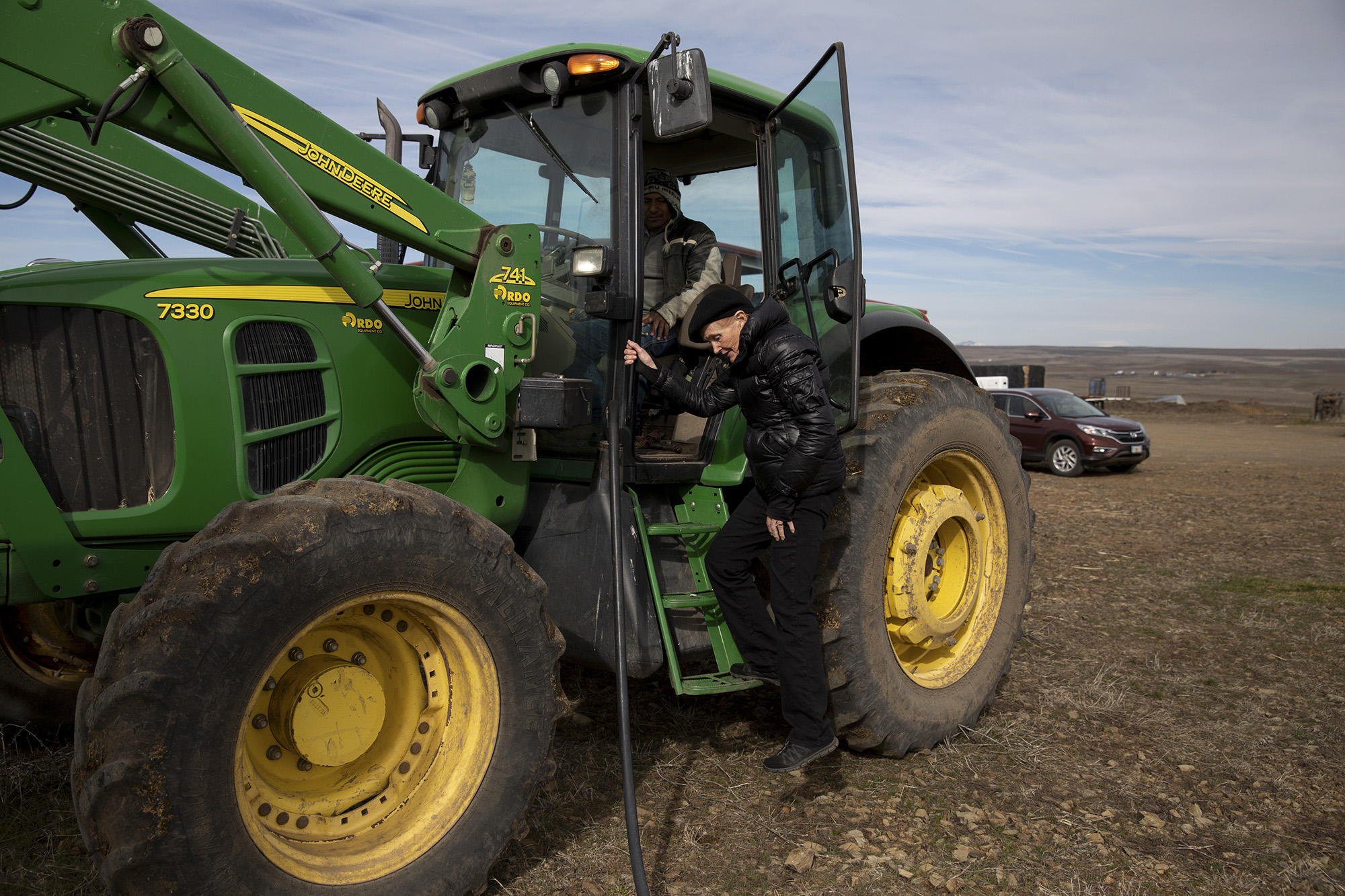 Ann Fernandez is seen here with one of her employees at her ranch outside Centerville, near the Columbia River Gorge on March 5, 2020. (Kristina Barker for Crosscut)

Ann Fernandez is seen here with one of her employees at her ranch outside Centerville, near the Columbia River Gorge on March 5, 2020. (Kristina Barker for Crosscut)

“It was kind of a shock,” said Ann Fernandez. “It’s hard, because as a rancher with animals and employees you have to plan far in the future to know where your animals are going to be. With me in particular, it was really hard because my husband had just died.”

The Department of Natural Resources manages over 1,000 active agricultural leases and rarely cancels any of them early. But because each cancellation can have an outsize impact on the life of an individual farmer or rancher, the 11 early terminations that occurred in Eastern Washington in the past five years have brought enough uncertainty to locals that state legislators have gotten involved. Prior to these cancellations and the resulting changes to state law, DNR was only required to give 60 days notice and zero compensation to farmers and ranchers forced to vacate public land years before their leases were up.

“As a freshman legislator last year, it sounded almost like a tenants’ rights issue,” said state Rep. Chris Corry, R-Yakima. In the 2019 legislative session, Corry introduced a bill dedicated to Max Fernandez that would have prohibited the state agency from canceling leases without the written consent of the lessee, effectively ending the practice.

But DNR is in a unique position, as it is legally obligated to generate revenue from the 3 million acres of trust land it manages on behalf of the people of Washington. Because that revenue goes towards building schools, universities and prisons, as well as funding vital county services, the agency has to follow what’s known as the trust mandate, which includes a duty “to strive to obtain the most substantial financial support possible” from the land it manages.

Traditionally, most of the money that DNR generates for schools and public services comes from timber sales and logging on trust lands; well over half of its annual income still does. But in many places in Eastern Washington, where the sunny, open grasslands are more suited to growing wheat than Douglas firs, the agency tends to make money by leasing its lands to farmers, ranchers and occasionally commercial developers.

And in recent years, as timber sales have declined, wildfire seasons have intensified and DNR has been sued by both environmentalists and logging interests over its latest set of forest plans, leases have become an increasingly important tool for generating money for schools and counties. Compared with the $42 million that DNR made from leases in 2005, the agency made double that — $84 million — from leases in 2018.

Although that amount still pales in comparison with the $198 million that DNR made from timber sales in 2018, new projects on Eastern Washington trust lands, including solar farming or growing irrigated row crops or grapes for winemaking, stand to bring in substantially more per lease than traditional agricultural uses like ranching.

DNR leadership strongly opposed Corry's proposed legislation last year, arguing that it would strip the agency of its power to maximize revenue when new opportunities became available. But after the bill didn't pass, the agency recognized that something needed to change, and DNR representatives began to meet with Corry and local ranching and farming interests.

“Over the last eight or nine months, we’ve met consistently with all groups to come to this agreement,” said Corry. “When one side had an issue with the other side, we hammered it out.”

The bill currently under consideration would compensate livestock owners like Fernandez six times the annual rent for every year they had left on a canceled lease. For agricultural leases, farmers would receive the net worth of what they would have made on the sale of their crops.

“I hope that Chris Corry’s bill can provide some consistency and transparency,” said Andy Juris, secretary and treasurer of the Washington Association of Wheat Growers.

In fact, the first wave of legislation to address leasing issues came in 2017, after a handful of Benton County wheat growers’ leases were ended at once so that DNR could make use of its about-to-expire right to Columbia River water and bring in a renter who would use the land to grow more profitable irrigated crops. 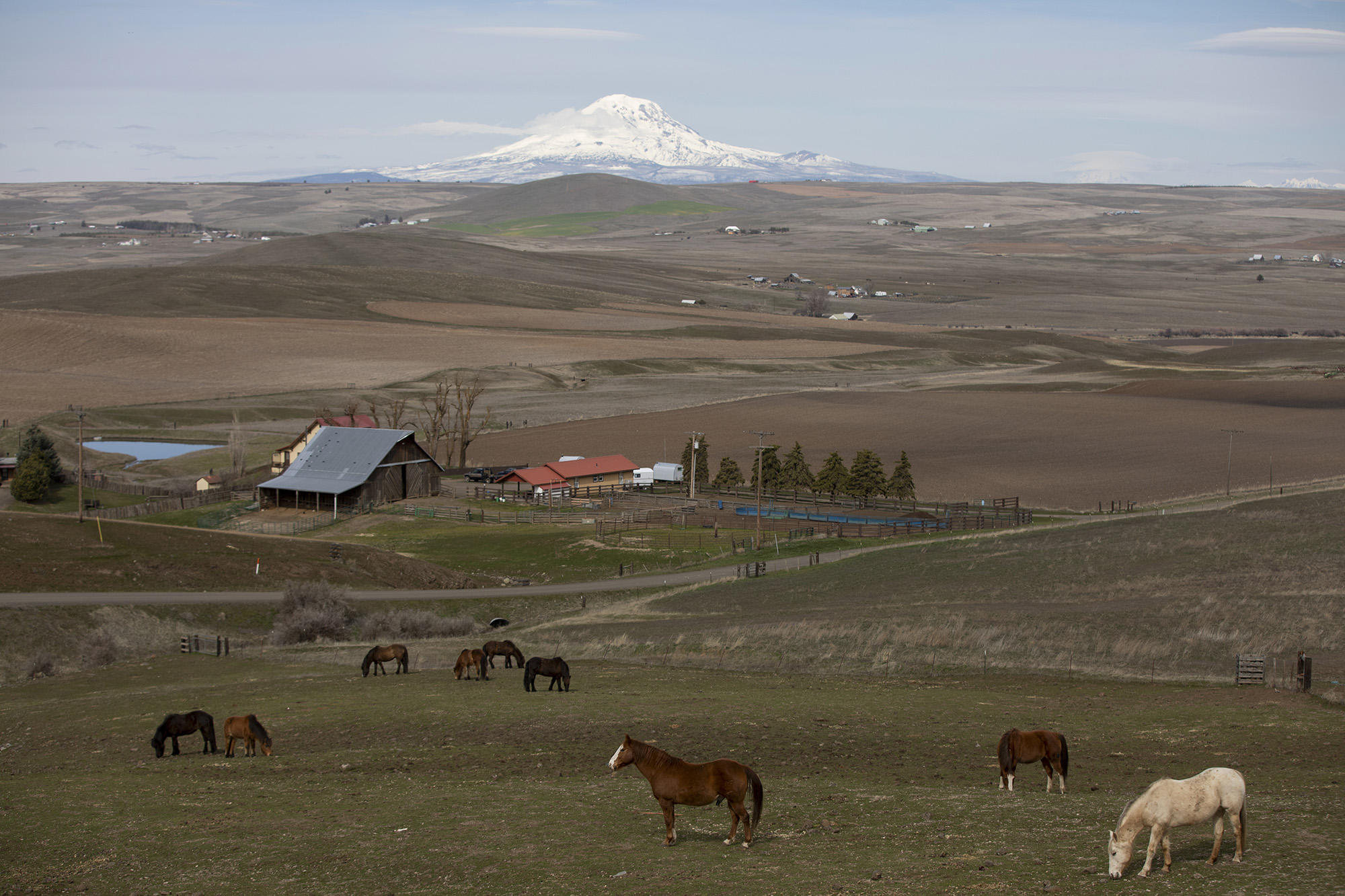 A view of the Fernandez ranch outside Centerville on March 5, 2020. (Kristina Barker for Crosscut)

A view of the Fernandez ranch outside Centerville on March 5, 2020. (Kristina Barker for Crosscut)

Wheat farmer Chad Smith had spent decades leasing land from DNR that lay adjacent to his own private property.

At that point, DNR was only required to give 60 days’ notice and didn’t have to provide any compensation to farmers, who stood to lose several years’ worth of revenue on the sale of their crops. After some negotiation, the agency agreed to pay Smith and his neighbors, but Smith said the amount he received covered only one-third of his $300,000 losses.

“Some guys lost a quarter of their farm,” Smith said. “It just left a bad taste in our mouths. I don't know if I'll ever do any business with DNR ever again.”

What used to be fields of wheat is now being used to grow potatoes, and the new lease brings in four times as much for public services as it did previously. Without switching the land away from wheat growing, DNR’s water rights, valued at $41 million, would have gone unused and expired at the end of this year.

After the agency’s dealings with Smith and his neighbors, the law was changed to require DNR to give 180 days’ notice to anyone whose lease was being ended. But for farmers and ranchers who plan their operations years in advance, that might not be enough.

“If I pick up another lease and buy 200 cows thinking that I’m going to have 10 years to pay those cows off, what happens if they say in year two, ‘You’re out’?” said Danny DeFranco, executive vice president of the Washington Cattlemen’s Association.

Klickitat County rancher Dave West, who helped craft some of the formulas in the new bill that determine how much lessees would be paid in the event of cancellation, took these kinds of experiences into account. He said people who lease agricultural land have to model their income and expenses — including debt — around how many acres they have available, and that “it can cause a lot of trouble” when land is suddenly lost.

“I think state leases will be more attractive now that people know that they will not be left out in the cold,” West said.

Sheep grazing and the solar surge

When the state announced its first-ever solar project on trust lands last year near Bickleton, also in Klickitat County and about 60 miles northeast of where Ann Fernandez lives, the DNR’s press release highlighted that the lease with Avangrid Renewables will earn $300 per acre annually for the Common School Trust. In contrast, grazing leases like the one the Fernandezes held bring in only $2 to $3 per acre each year. 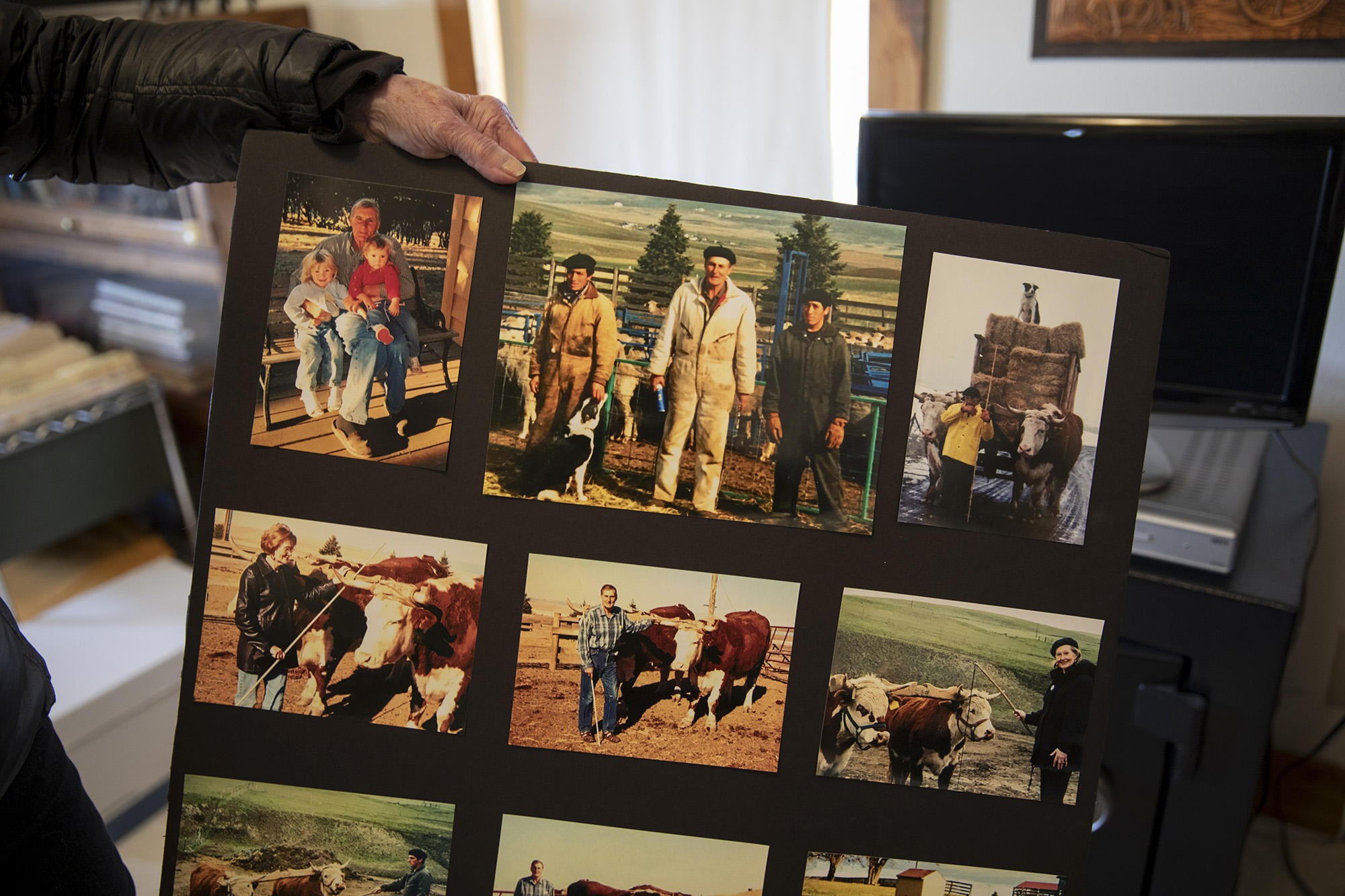 Ann Fernandez shows photos of her late husband, Max, at their ranch outside Centerville, March 5, 2020. (Kristina Barker for Crosscut)

Ann Fernandez shows photos of her late husband, Max, at their ranch outside Centerville, March 5, 2020. (Kristina Barker for Crosscut)

“The desire to decarbonize the power generation on the I-5 corridor is really driving a lot of this — to get out of coal and natural gas and start generating power on the eastside that isn’t just hydropower,” said Duane Emmons, DNR leasing division manager.

With 35 pending solar projects in the pipeline, Emmons acknowledged that a slight uptick in lease cancellations might result, but he stressed that the agency doesn’t want to terminate leases early.

“We’re going to minimize that as much as possible,” Emmons said. “It’s not something we do lightly.”

In fact, regardless of whether the new bill becomes law this year, he said, “DNR will look to [implement] the compensation schedules outlined in the bill because we feel it makes good business sense to do so.”

Despite the abundance of sun and the promise of more revenue for schools, no solar project has yet materialized on the state land adjacent to the Fernandez Ranch. Multiple solar companies expressed interest, but because of connectivity troubles with the nearby grid, no companies bid when the land was put up for a solar lease.

“We don’t want to have situations like the Fernandez lease, where we had people who were definitely interested, and they notified us that there were difficulties. We wanted to be proactive and reach back out to Mrs. Fernandez,” said Emmons. “The solar potential is still there, it’s just not an immediate project,” he added.

For now, Ann Fernandez is back on the public land where for years she and Max let their livestock roam. She’s entered into a short-term agreement with the state that allows her to again use the land for grazing, but with the potential for a solar farm still looming, her time there is likely temporary.

Even after the upheaval, Fernandez maintains friendly relations with the Department of Natural Resources.

“The local DNR people have always been so helpful,” she said. “They really have tried to be very helpful, except for when they just pulled [the lease].” 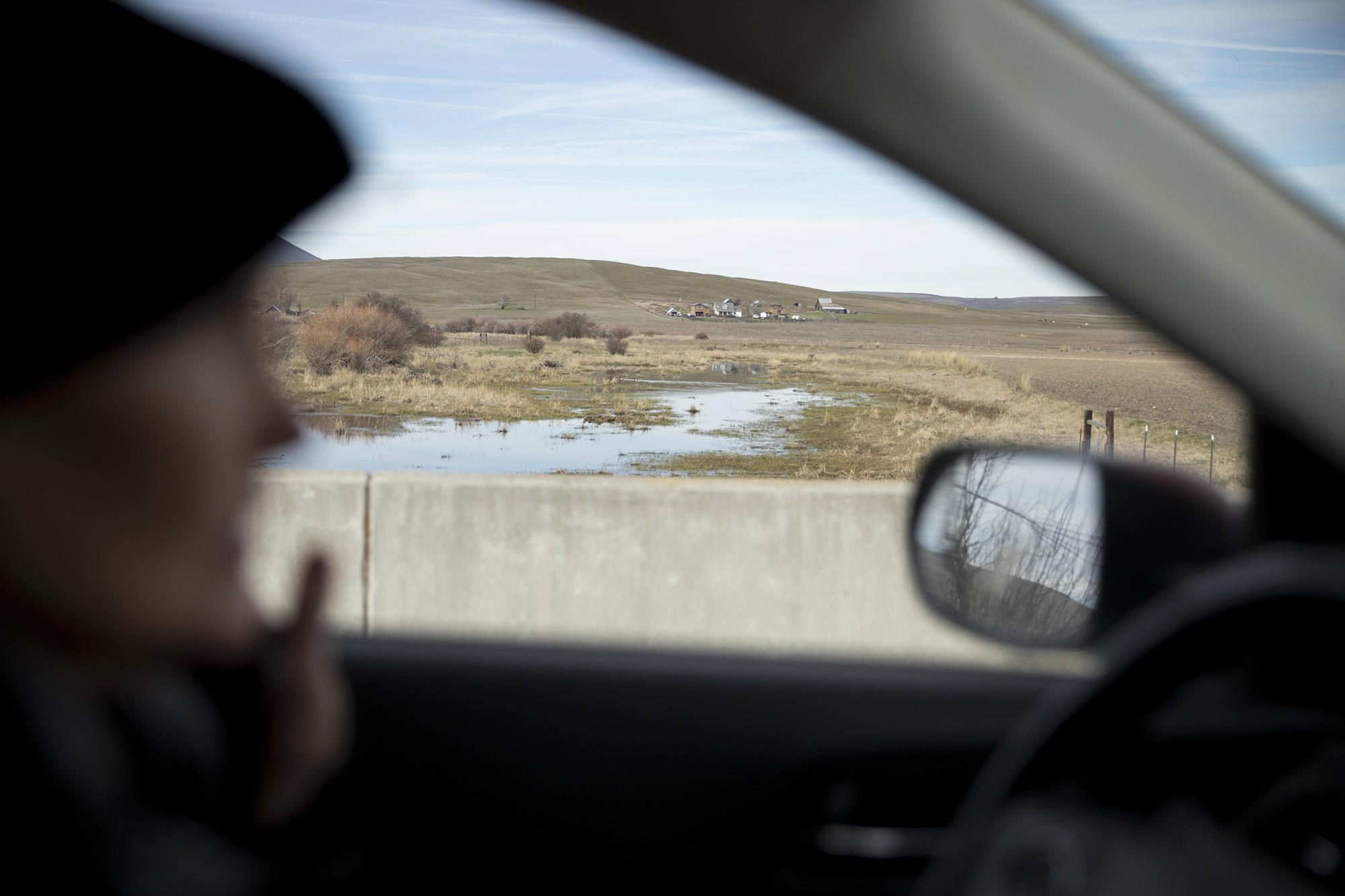 Ann Fernandez points out a creek on her ranch outside Centerville, March 5, 2020. Her two employees were working to move sheep in preparation for lambing season to begin. (Kristina Barker for Crosscut)

Ann Fernandez points out a creek on her ranch outside Centerville, March 5, 2020. Her two employees were working to move sheep in preparation for lambing season to begin. (Kristina Barker for Crosscut)