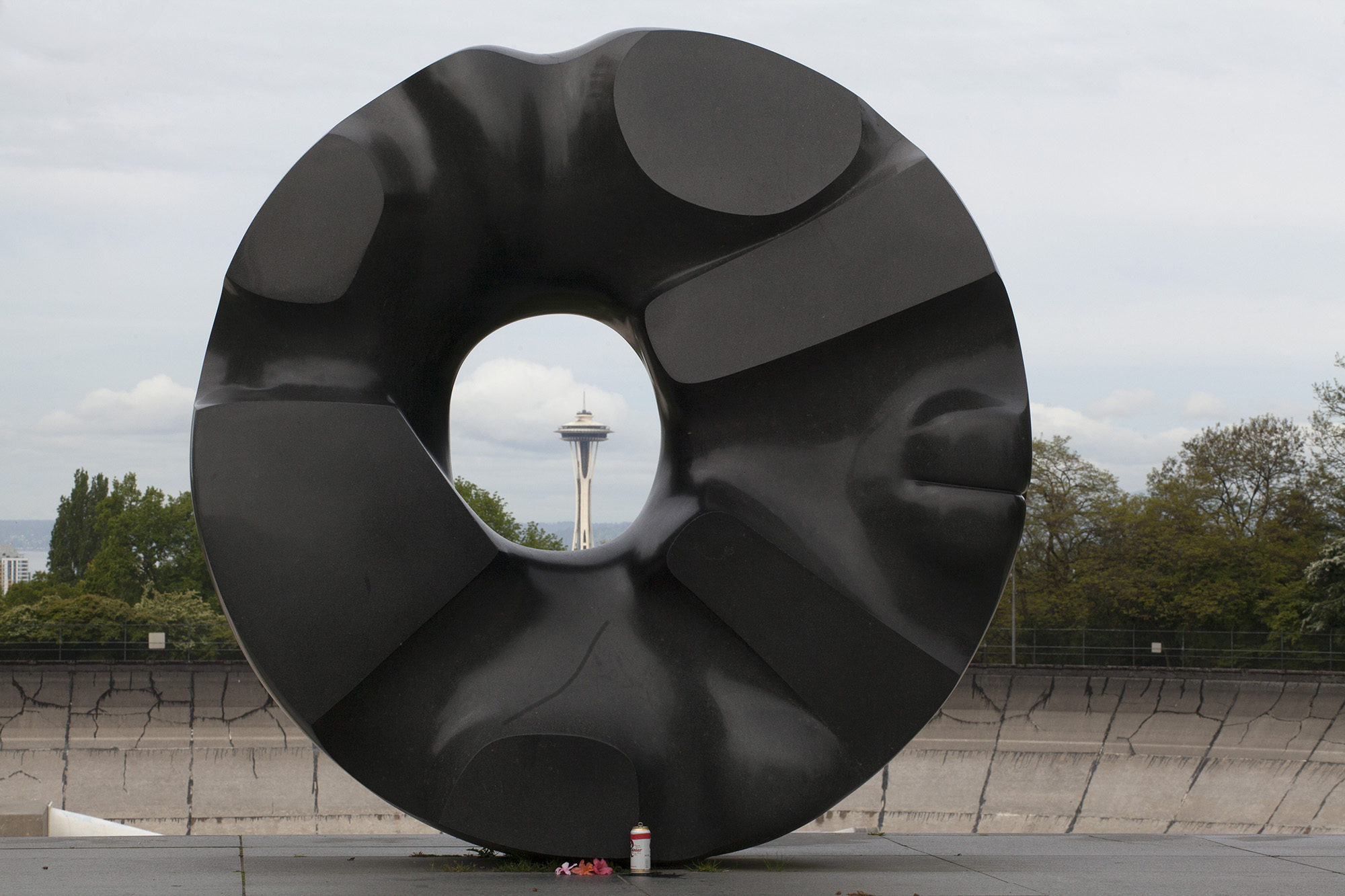 Future archeologists may one day look to Volunteer Park's 'Black Sun' sculpture as an odd homage to the donut, or perhaps a way to honor the real sun in the sky, or maybe they'll just think it's Seattle being weird. (Matt M. McKnight/Crosscut)

Recent Archaeological Survey, the Seattle Archipelago, 2520 CE — Seattle was a major city on the Salish Sea in the Old United States. Evidence indicates a sprawling and largely prosperous urban area that thrived for three centuries before declining, brought on by a series of catastrophic events followed by dramatic sea level rise.

Multiple pandemics weakened the population and were accompanied by seismic events on both the Juan de Fuca fault off the Pacific Coast and on the Seattle Fault, which ran directly under the former city. A cone collapse of Mount Tahoma and resultant volcanic eruption triggered massive lahars, Salish Sea tsunamis and layers of ash. The impacts were devastating for Seattle, exacerbated by rising oceans and a weakened economy. Major infrastructure failed, the population declined, basic commerce proved unsustainable. Lahars had buried the southern suburbs in 6o feet of debris and disrupted transportation. Resources did not exist to rebuild.

Today, much of the city’s ruins are underwater, as sea level has risen more than 200 feet since the mid-20th century — not unlike what has occurred at the sites of Old New York, Miami or even the newly discovered remains of Atlantis. What is left above ground are sparse ruins in a lightly inhabited archipelago of tropical islands. The resilient Salish peoples have stewardship, though conditions are dramatically different from 500 years ago: Palm trees have replaced red cedar, and where orca whales and salmon once were mainstays now sharks and alligators are abundant. The only habitable structures on the islands are a few indigenous neo-longhouses.

Human remains are few and far between. Scholars suggest this results from the advent of human composting in the early 21st century, though an ancient cemetery atop Capitol Island has revealed occasional undisturbed remains of late 19th century burials, including skeletons preserved in metal boxes under granite slabs.

Evidence abounds that this was a vastly spiritual and ritualistic society. For example, outside the doorways of what appear to be gathering places where people partook of sacred coffee drinks, genetic evidence reveals that offering bowls for canines were common, indicating a broad worship of dogs. Indeed, an excavation of one such place suggests it was an eating establishment exclusively for canines, indicating a high-status dog cult.

There are other indicators of animal worship. The underwater remains of a vast complex of game arenas has yielded evidence of a predator bird cult involving gladiators. And remains of large pieces of painted metal, possibly the sides of vehicles called “vans,” have been found inscribed with the word “Amazon” and the image of an upward thrusting phallus. Combined sometimes with the inscription “Prime” this might indicate a priapic, monotheistic worship of a god originally associated with a vast forest known as the “Amazon” in the Southern Hemisphere, now an arid plain but once a fecund repository of flora and fauna. Fertility fetishes are common in many ancient cultures where human procreation occurred by primitive means and it has been noted the vans were once associated with such activities and called “shag wagons.” These van vehicles might also have been tied to birthing rituals. The scant historic record suggests they were used for “home deliveries,” probably by members of a religious order of midwives.

Much of the historic record is nonexistent. It is theorized that widespread reliance on “storing” information on a cloud was likely a metaphor. If it really existed, its ephemeral nature was wiped out over the centuries. Paper documents are extremely rare. There are virtually no remaining physical archives, though some government documents have been found buried in Missouri, 2,000 miles away in the former United States.

Puzzling to researchers is the odd assortment of public sculptures that have survived: a man feeding birds, a bearded figure under a collapsed bridge, a man on his knees clutching an ancient instrument. They are thought to be mythological figures as they do not appear to reflect known power rulers, such as the fabled Chief Seattle, Big Landes or King Horton, but their stories have been lost.

A curious surviving object is a large black stone sculpture on what was once a hilltop. It is shaped after a popular ancient confection called a “doughnut.” It is thought to have been aligned with the setting sun, a rare occurrence in a climate once noted for gloom. Perhaps rare sunny days were occasions for ritual sacrifices and celebrations.

Still, the essential religious nature of the populace is apparent and informs a number of infrastructural finds. A vast concrete and steel roadway system is detected on the seabed. This system was expanded widely in the age of global warming, despite this transportation system’s reliance on fossil fuels. Such things are common in the archaeological record of antiquity. Roman and medieval cultures thousands of years ago used lead pipes we know to have undermined their health, mental acuity and judgment.

The persistence of building massive roadways over the centuries suggests possibly a religiously motivated mania. One academic theory is that they were constructed primarily as pilgrimage routes often ending in large box-style retail communities on the urban periphery that served as markets and centers of fetish worship.

A supporting piece of evidence: There are signs that these roadways were lined with encampments where people lived a very basic lifestyle with no water, heating source, limited food and shelter.

One idea is that these were impoverished citizens, which seems unlikely, given the legendary prosperity of the people as evidenced by the remnant foundations of their massive tower villas indicating vast wealth. These towers suggest highly defended structures, which could indicate some level of income inequality and social unrest in the city. It should be noted that in an inundated part of what is thought to have been the core commercial district, called “The Blade,” gun shells have found scattered at certain intersections, indicating at least occasional violence. Still, the towers appear to have been largely unfortified, if tall, and built largely of glass.

More likely, such wealth would have been shared more widely, which leads to an alternative theory that these encampments are evidence of the campsites of religious pilgrims following the roadways to sacred sites. Associated middens have produced preserved hypodermic needles, an ancient medical technology, and other drug-related paraphernalia, indicating perhaps an ecstatic, intoxicating element to their belief system, not unlike peyote cults or the fumes inhaled in ancient Eleusis.

The materials most used in dating various strata, particularly in the 21st and 22nd centuries — in addition to mud, ash, glass and tsunamic layers— is the prevalence of plastics. The plastic fragments serve much as the potsherds of more ancient cultures that can help dates sites. This material was heavily relied upon in the Tupperware Era. There is evidence in the historic food chain that suggests plastics were widely ingested, substantiated by samples obtained from analyzing coprolites dug out of remnants of an ancient sewer system.

A curious site is an ancient brick wall, now part of a coral reef, to which massive quantities of gumlike material was affixed and preserved by the reef. The genetic, fingerprint and protein evidence indicates that many thousands of people covered this wall with chewed gum, likely in an effort to make offerings to the dog, Amazon, sun or bird gods, or to perhaps immortalize their individual identities. It is possible this is an early example of genetic tithing, the modern practice of sharing one’s DNA publicly, an act considered a boon for all in terms of maintaining diversity in a depopulated world. Recovery of genetic profiles is giving researchers what they need to recreate multidimensional Seattle inhabitants of half a millennium ago.

Seattle was once a significant city that became, in essence, like Pompeii, Atlantis, Old San Francisco and Los Angeles, Dark Age Denver and Nouvelle Katrina City, whose prosperity and resilience were overwhelmed by geology, biology, economics, climate change, migration, war and political shifts. The resulting cultural landscapes are as complex as they are mysterious.

While there is evidence that once great passenger carrying ships stopped regularly in Seattle  — so-called cruise or “plague” ships — the port that served them is gone. However, for researchers, it has created a kind of time capsule that can be visited, given tribal permission, by careful researchers who have respect for the dead.