Why Native people 'need to count' in the 2020 census

After decades of historical undercounting, Washington’s nonwhite communities hope the results of this year’s census will boost access to critical resources. 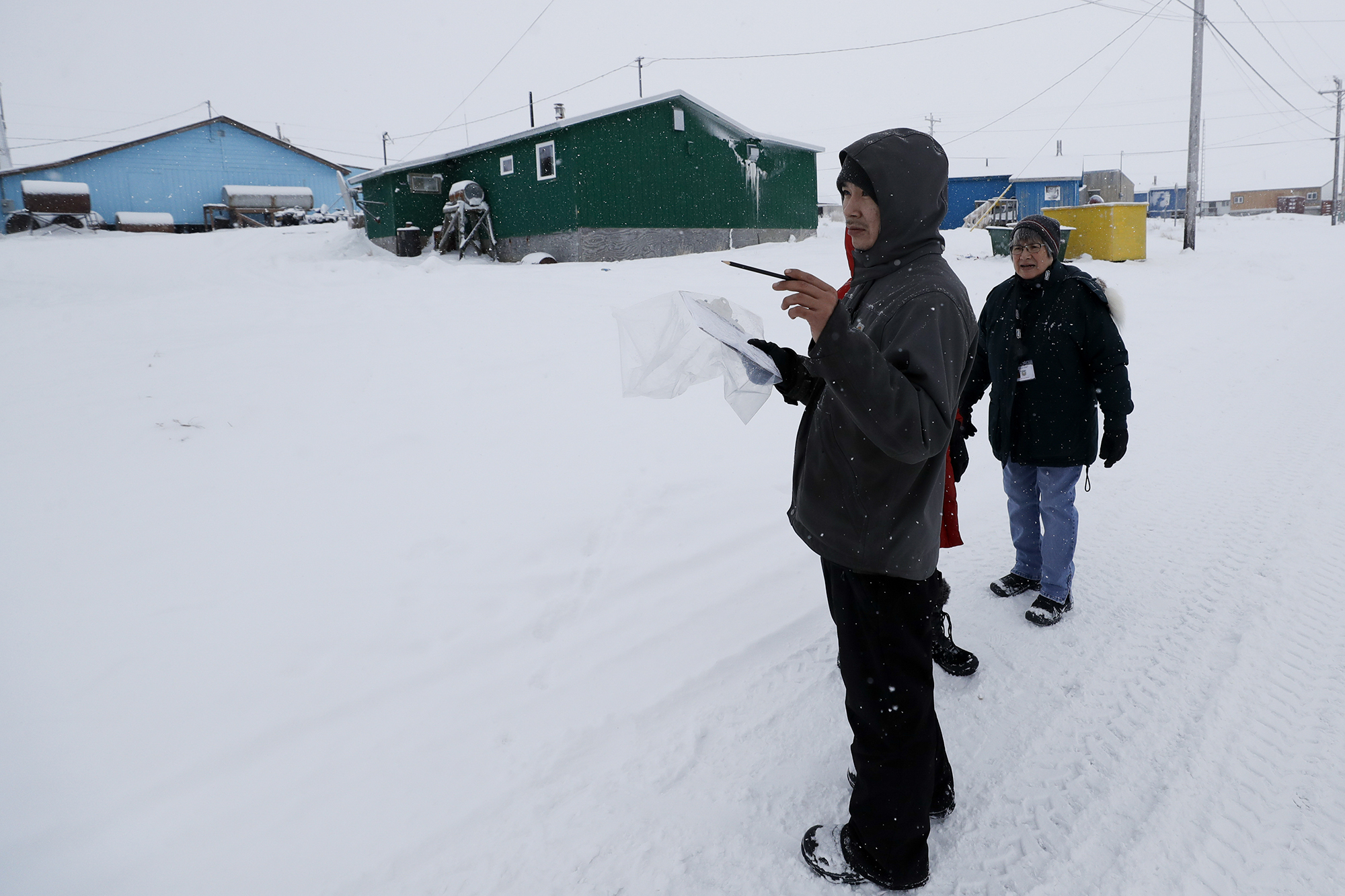 In this Jan. 20, 2020, photo, census workers verify that their maps match the right number of houses in Toksook Bay, Alaska, a mostly Yup'ik village on the edge of the Bering Sea. Census workers traditionally begin the official decennial count in rural Alaska when the ground is still frozen. That allows easier access before the spring melt makes many areas inaccessible to travel, and residents scatter to subsistence hunting and fishing grounds. The rest of the nation, including more urban areas of Alaska, begin the census in mid-March. (Gregory Bull/AP)

When Ramona Bennett became a member of the Puyallup Tribal Council in 1968, she wanted to see change. The tribe had no health clinic, no school, no large source of income like the casino they currently own.

They didn’t even own their cemetery. “This tribe literally had nothing,” she recalled. At the time, the Puyallup Tribe was down to about 170 enrolled members, a stark contrast to the more than 5,000 it has today.

“We had no services, none whatsoever, and no recognized rights,” said Bennett, who wanted the tribe to have a clinic and a school. Both required money it didn’t have, so she set out to apply for grants. That, she soon realized, was an issue in itself.

The U.S. census has long severely undercounted Native people, and prior to the 1970 census included especially low numbers for these communities. Without those numbers on hand, it was difficult — if not impossible — for Bennett to make the case for grant money. So leading up to the 1970 census, she rallied Native people in Pierce County, where the Puyallup Tribe is located, to participate and make their number known.

It wasn’t until after the 1970 census, when Native participation shot up, that Bennett said she could successfully apply for grants. Those grants paid for the tribe’s health clinic and school, Chief Leschi, both still in use today.

“By ’76, when we were doing job training, a school and a clinic, we had a substantial count of Native families,” she says.

The 2020 census began March 12, and the U.S. Census Bureau said it is focusing on fixing historic undercounts. Census takers will begin visiting homes in May.

Of those frequently undercounted, Native people have been the most underrepresented racial group in the final reports. In 2010, the U.S. Census Bureau estimated that American Indians and Alaska Natives living on reservations were undercounted by 4.9%, more than double the 2.1% undercount of African Americans, the next most undercounted community.

The question of race has been one of the most enduring questions in the census since 1790, although its format has evolved over time. While the census began in 1790, many Native people weren't counted until 1860. Some estimates project an overall undercount for the 2020 census between 0.27% and 1.22%, with disproportionate impacts on communities of color like Black and nonwhite Hispanic/Latino people, whereas non-Hispanic/Latino white populations have been previously overcounted.

Census data does more than represent the country. For many states, Washington included, it also helps dictate where federal funding goes. If a community is undercounted, that often means less money is allocated there, like for the Puyallup Tribe.

In the past, the Census Bureau has called historically undercounted populations “hard to count” communities. But Elsa Batres-Boni, the census strategic adviser with the Seattle Department of Neighborhoods, said calling them “undercounted” paints a better picture.

“When the census uses ‘hard to count,’ it puts the blame on the people,” she said. “It’s not that people don’t want to participate. When we call it historically undercounted, we put the attention on the barriers to participation.”

Those barriers differ from community to community, sometimes including language barriers, lack of access to the internet or a simple lack of information. After all, it’s easy to forget the details for something that happens only once every 10 years. Batres-Boni said these barriers are currently being exacerbated by the coronavirus outbreak, which has caused community organizations throughout Washington to cancel in-person outreach events.

Even so, the work to boost numbers in underrepresented communities began long before the virus struck. The Census Bureau kicked off early efforts for the census in January in Alaska, focusing on Alaska Native communities three months before everyone else. The bureau also employed Native census liaisons in Washington and other states in order to get better insight on what could boost Native participation.

The reasons for low participation are complicated, but tribal liaison and Quinault Indian Nation member Alaina Capoeman said it often comes down to the government’s historic relationship with tribes, which in the past has included all kinds of oppression. Capoeman said it’s important for tribes to see people working for the Census Bureau who hold their values and reflect their needs.

“We want more people who look like these communities, so some of that fear and uneasiness is alleviated,” Capoeman said. “And so they feel safe enough to answer these questions.”

Native people don’t have to prove tribal membership in order to mark themselves as “American Indian or Alaska Native” in the census, which is one of the first things Capoeman tells people when visiting Native communities. In the census, race is completely self-identified.

“We’re so used to having to prove who we are,” she said. “But in the census, it’s not so much proving that — it’s who do you think you are.”

Funding bolstered by an accurate census count will help tribes like the Quinault and others along the peninsula that are getting ready to move due to rising waters that have put their reservations in flood zones, Capoeman said.

Capoeman and other census liaisons partnered with tribes to educate Native communities on how to prepare for the census through the Rez2Rez Voter Registration and Census Rally tour, which was led by Lummi activist and Councilmember Freddie Lane. The tour has been postponed for the time being by the coronavirus outbreak, but in the stops it has made so far, it was a chance to educate and encourage people to participate in both the election and the census. It’s similar to a tour that came before it: In 2018, Quinault Indian Nation President Fawn Sharp led a tour to rally the Native vote in time for midterm elections.

“The year my grandparents were born in the 1890s, they weren’t even recognized as U.S. citizens,” Lane said. “We’ve come a long way with our abilities to mobilize.”

For all undercounted communities, Batres-Boni said what’s important for them to know is that the information taken in the census is completely confidential. Concerns about information from the census questionnaire leaking and negatively impacting the person filling it out are common, she said. Conversations last year about adding a citizenship question to the questionnaire are one example of that. While the citizenship question didn’t make it to the final questionnaire, Batres-Boni saidt she’s made sure to relay that information to communities she talks to, as many aren’t aware it was taken out.

In general, Batres-Boni said her work means telling people why these numbers are so important. Children, for example, are the most undercounted age group, and Batres-Boni said parents sometimes don’t realize the significance of having a child left uncounted. When doing outreach, she reminds them that this count will be official until the next census in 10 years, so it’s important that they’re represented now.

“If a kid wasn’t counted, that kid is not represented for another 10 years,” she said. It’s the same for other communities: If you’re not represented now, the results excluding you will continue to define where federal money goes and how areas are politically represented for years to come.

The work isn’t over for Bennett. When she started rallying for census participation, she said the only place she felt Native people were ever counted was in children’s nursery rhyme “Ten Little Indians.” In school, Native stories were erased — she remembers learning that there were “no survivors” of the Battle of Little Bighorn, erasing the story of the Native soldiers who won the battle.

“We had to push to get ourselves counted,” she said. She and others reached out to Native people prior to the 1970 census who didn’t have cars or landlines, making the effort to personally reach the people that workers for the Census Bureau didn’t. When that census was taken, their number increased dramatically from the previous two censuses.

While stronger efforts to boost numbers of undercounted communities accompanied the 2010 census, these efforts were still fairly new. When Bennett first began to campaign for increased participation, racial classification in the census was vague. The 1950 census said the concept of race at the time did not “reflect clear-cut definitions of biological stock, and several categories obviously refer to nationalities.”

In those days, race was “not based on a reply to questions asked but rather [was] obtained by observation,” according to the 1950 census document for Washington. Enumerators asked a question only “when they were in doubt.” In the 1960 census, the “three major categories” of race in the census were simply “white, Negro, and other races,” with “persons of Mexican birth or descent” often categorized as white. Race was not completely self-identified until the 1970 census. It’s hardly surprising, then, that misclassifications and undercounts were numerous.

“Talking about race in any context is made difficult because it’s a social construct,” Batres-Boni said. While the census is much improved since then, she said, “The form is not perfect and the recommendation from communities is to try and represent yourself as closely as you can.”

As a prominent Puyallup activist, Bennett has taken it upon herself to continue the work she started back in 1968, rallying her constituents around the census and reminding them that it matters.

“They couldn’t just shove us aside and ignore us because we had that count,” Bennett said of her efforts before. “We need to count.”

Update: While the Census Bureau has stated that field operations will continue despite the COVID-19 outbreak as they have procedures in the case of a pandemic, this week they announced a two-week suspension of training and outreach.