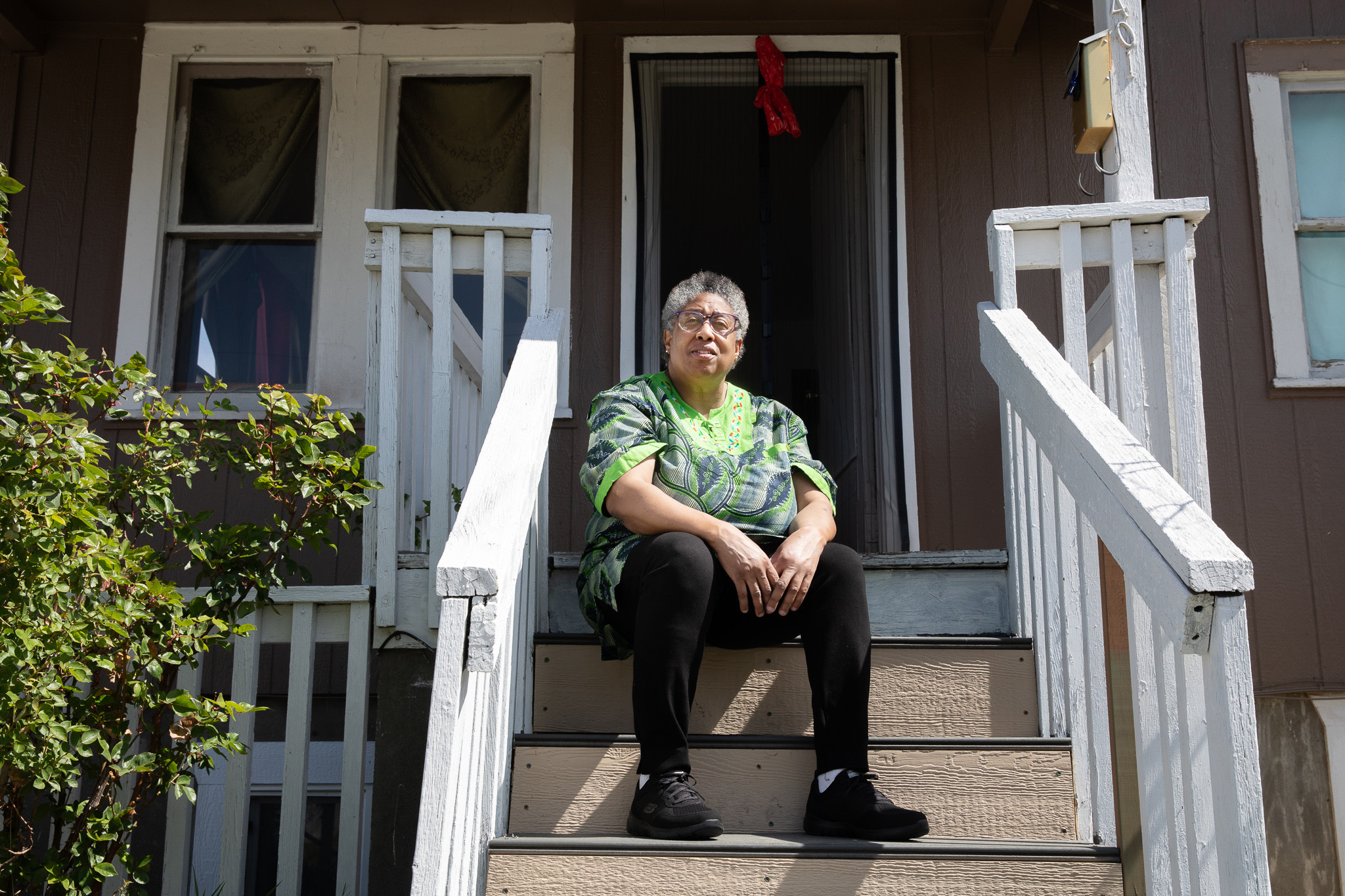 Antonette Blythe sits on the front steps of her house in Wenatchee, Chelan County, on April 21, 2020. She's concerned about her teenage son, whose facility in the juvenile justice system had a confirmed COVID-19 case. (Matt M. McKnight/Crosscut)

Antonette Blythe was surprised to hear of a confirmed COVID-19 case at Green Hill School, the secure juvenile justice facility in Chehalis, where her teenage son has been since March 4.

She wasn’t sent a letter and didn’t receive a phone call from Department of Children, Youth and Family, which runs Washington’s juvenile rehabilitation facilities.

The 59-year-old Wenatchee bus driver raised 17-year-old Donte alone, alongside his 21-year-old sister, who is now out of the house. Donte is technically her great-nephew, but she adopted him at 2 years old and affectionately calls him her son.

Blythe was already concerned about the spread of COVID-19 inside juvenile facilities. She didn’t know about the confirmed case until she was interviewed by Crosscut. Now, her anxiety levels are climbing even higher.

She said she talks to Donte almost every day on the phone. When she last asked him about precautionary measures being taken inside, he said they no longer have communal meals, but that social distancing isn’t common.

“We’re just sitting down, playing cards, talking to each other and running around,” Blythe said her son told her. “They’re not doing anything [for social distancing] per what my son’s saying. I said, have they given you hand sanitizers? Do they let you guys wash your hands often? No. From what my son says, no.”

She asked her son if anybody was sick, and he told her no, not in Spruce, his unit.

It’s hard to get many details out of Donte, Blythe said, because his anxiety rises and he starts to get argumentative. Donte has ADHD and learning disabilities, with drug and alcohol dependencies. He was born with meth and cocaine in his system. Blythe worries about his mental health, but said it’s difficult to tell how he’s faring without being able to see his face — she can tell by his eyes, by his demeanor. But she does know one thing.

Donte's initial release date was May 3, but it was extended until at least June 22 after he got into a fight with another kid. His maximum end date would be July 12. But Blythe wants the early date reinstated, especially now with COVID-19 concerns.

She’s not alone in fighting for early release of detained youth.

Members of the American Civil Liberties Union of Washington, TeamChild and about two dozen other nonprofit, legal and community groups sent a letter to Ross Hunter, secretary of the Department of Children, Youth and Families. In it, they called for the release of all youth, starting with the immediate release of youth who are medically compromised or are within six months of release, like Donte.

They also want regular COVID-19 testing to be made available and  standard health regulations to be established, including access to soap, water and hand sanitizer, and ensuring social distancing takes place.

"JR [juvenile rehabilitation] is particularly ill-suited to address the current pandemic. … Once COVID-19 breaks out, it will likely spread quickly," the letter said. "JR is simply not equipped for providing the level and quality of medical care that will be required in such an outbreak, and unless immediate and serious steps are taken to slow transmission within its facilities, youth will die needlessly."

They’re hoping to follow in the footsteps of Gov. Jay Inslee, who issued an emergency commutation on April 15 for the release of more than 1,100 adult inmates with nonviolent offenses. This followed an April 8 uproar among inmates at the Monroe Correctional Facility, who currently lead the state with the most confirmed COVID-19 cases: 12 inmates and seven staff. Eight other state Department of Corrections locations also have confirmed cases, totaling 19 staff and 13 inmates.

For juveniles, DCYF runs three secure residential facilities and eight community facilities across the state, with a current total of about 420 youth. Green Hill is one of the three secure facilities, holding older males from 16 to 21. Half of Green Hill’s youth have individualized education programs, or IEPs, a written plan for special education students; 80% have mental health needs. Donte has both.

All detained youth get a minimum and maximum sentence and are released somewhere within that range, said Marybeth Queral, DCYF assistant secretary of juvenile rehabilitation. While the department is not considering early release, Queral said it is looking at the youths' minimum sentences “through the COVID lens” and reevaluating the situation.

It also wants to make sure the child has a safe release plan, with a home to go to and resources to access. Queral is also looking at about 13 youth who are medically compromised.

“We’re in that process right now of reviewing all those kids,” she said. But there are no further actions planned beyond that.

Queral confirmed that youth are eating their meals in their rooms instead of in the dining hall. They are obeying 6 feet of social distancing, she said, but acknowledged the kids are still playing card games and puzzles, swimming and playing pool. They go outside, but now in small groups, Queral said, because it’s important to keep them active and healthy.

The staff is cleaning multiple times a day, disinfecting common areas, meeting rooms, tables and door handles. Youth are paid to help disinfect alongside regular custodial staff, if they choose. Facilities are following Department of Health protocols, such as taking the temperature of every staff and third-party vendor before they enter the building.

Infectious disease protocols were set in place before the COVID-19 outbreak, so the department was ready, Queral said.

The facilities have been able to secure enough personal protective equipment, Queral said, including N95 masks, gloves and gowns. They put in weekly orders through the state Emergency Operations Center and have access to hand sanitizer as well.

Queral said if any youth display symptoms, they see nursing staff right away. In some cases, they are tested. She said “several kids” have been tested — and all came back negative — but she wouldn’t provide an official tally of tests, for youth or staff.

The one confirmed case at Green Hill involved a staffer who had visited a family member who was confirmed COVID-19 positive. She immediately informed DCYF, who put the living unit where she worked into quarantine status. All 12 of the staff and 12 of the youth in that unit were also quarantined. The staff member later tested positive for COVID-19.

Since the youth were quarantined together in their living unit, they were allowed out of their rooms, and no staff members work across different living units. The youth were tested and no one came back positive.

With the court systems mostly closed, new intakes have decreased dramatically. However, new youth are still quarantined for 14 days before being placed into a living unit with others.

Blythe has had contact initiated by DCYF only three times — one from Donte’s psychiatrist, one about shutting down visitations and one from a teacher to go over Donte’s history. None addressed the confirmed case.

Blythe doesn’t think that’s enough. She wants better communication from DCYF and Green Hill regarding COVID-19 and, more important, she wants early release. But she mostly worries about her son.

As she tells him on the phone when his anxiety starts to rise, “I love you and I’ll always love you. I love you to the moon and back.”