On top of the social strain of not seeing loved ones, the COVID-19 border closing has caused financial trouble for some. 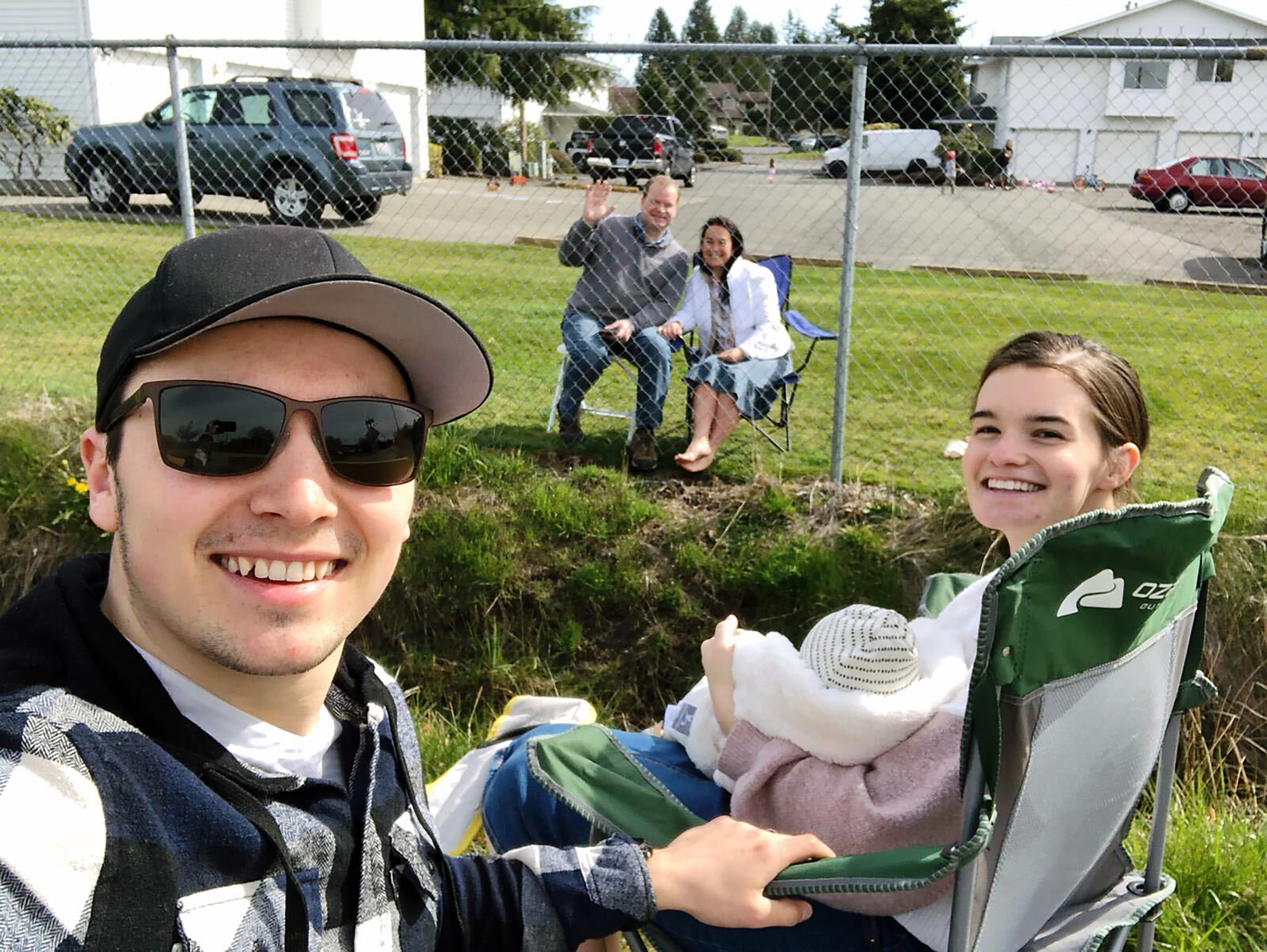 John and Sharon Andes visiting their grandchild in Blaine, Washington, on April 13, 2020. (The Andes family)

There’s the photo of newborn baby Stephen wrapped in a white fluffy blanket, wearing a gray beanie. Another picture features grandpa sitting in a comfortable chair holding Stephen while at his daughter's home in Cloverdale, a community in Surrey, British Columbia.

Then suddenly, only days after Stephen's birth on March 15, there’s video of the family — grandparents and baby with his parents — at the international Peace Arch Park, 43 acres that straddle the United States and Canada and where visitors aren’t required to carry a passport.

“This is where we have to meet now, our family, since we can’t cross the border,” John Andes, the 48-year-old grandfather can be heard saying in the family video.

Until last month, this was the reality some families faced at the northern border because of the COVID-19 pandemic. On March 16, Canadian Prime Minister Justin Trudeau announced the country was closing its border to anyone other than Canadians, permanent residents and U.S. citizens. Only days later there was another announcement: In an unprecedented move, the U.S. and Canada had agreed on March 21 to close the border entirely to all nonessential travel.

In the past, Canadian and U.S. families who lived nearby may have made a daily habit of crossing the border. Now, suddenly, they had second thoughts about visiting relatives on the other side. Only individuals traveling to receive medical treatment or working in essential businesses, such as truck drivers and migrant workers, should travel back and forth, officials with U.S. Customs and Border Protection warned. The last time U.S. officials closed the northern border in any way was in the aftermath of the 9/11 terrorist attacks when passengers were subjected to enhanced screenings, causing traffic to back up and long delays.

For nearly a week, the Andes family could meet at Peace Arch Park, which for decades has been used as a kind of meeting place for those who can’t, or don’t want to, bother with the hassle of border crossings.

“If you had said to me ... that the Peace Arch border is going to close, I would have said never,” said Leonard Saunders, an immigration attorney in Blaine, the Washington town where part of the Peace Arch Park is located. The park, which sits right next to the border crossing, features the Peace Arch monument as its centerpiece. Etched on the monument: “May These Gates Never Be Closed.”

Despite the inscription, for all intents and purposes, Saunders said, the gates have been closed.

“This is like 9/11 on steroids,” Saunders said. Even after the 2001 attacks, the park, where couples have married and babies have been christened, had remained open.

The U.S.-Canada border is scheduled to reopen next week. But the pandemic makes that timeline uncertain. So far Canada has managed to keep the death rate from COVID-19 relatively low: approximately 1,000 people have died in Canada compared to about 30,000 in the U.S.

Saunders said he and other immigration attorneys have dozens of clients who are only halfway through the process of obtaining a U.S. green card or Canadian permanent resident card who aren’t able to see their partner, but are left waiting in the U.S. or Canada.

On top of the social strain, the border closing has also caused financial troubles for some families.

“Blaine is kind of a ghost town right now,” Saunders said, adding that some gas stations there have been so desperate for business that they’ve started giving away free milk.

The government measures are mainly aimed at curtailing the movement of cross-border shoppers and tourists, hurting businesses on both sides. Nationwide, vehicle and pedestrian traffic is down about 72% and 83% respectively on both the northern and southern borders, said a spokesperson for U.S. Customs and Border Protection.

With the border and the park both closed, the Andes family had no way to see their grandchild, even from a distance. Granddad John, and his wife, Sharon, were stuck in the U.S., while daughter Victoria, her Canadian husband and the new baby lived in Cloverdale.

So this week the grandparents, who have lived in Blaine for over 20 years and know the area well, went searching for Zero Avenue in Whatcom County, a road that runs alongside the border. There they found a grassy area by a ditch. Various members of the Andes family set up lawn chairs on each side of a chain link fence.

The strategy worked, the family said, as long as they didn’t try to pass the baby over the fence. A border guard had warned them not to. The two sides of the family talked for about an hour.

“I’m sure there's other people seeing each other that way,” John Andes said.

The family get-together came to an end only when a property manager claimed the area where they had set up the chairs belonged to the complex there and asked them to leave.

Sharon, the grandmother, said she was happy she was able to see the family but that the situation remains “very painful for me.”

“It’s killer for me, a grandma, I can’t even be with the baby for the first weeks of his life,” she said in a recent telephone interview. “He’s a cutie, too.”

“My daughter almost every day she cries because she has no one to help her,” she continued. At 21, Victoria is a young and inexperienced mother, Sharon explained.

“We’re just trying to stay positive,” she added, noting that the baby had been born healthy. “But it’s not easy for her.”

Sharon said technically her daughter, Victoria, could visit her since Victoria is a U.S. citizen. But Canada would require Victoria to quarantine herself once she returned home, separating her from her husband. Sharon said that instead of relying on her help, her son-in-law had decided to take additional time off work, but only with partial pay.

“I know in reality we probably have it good compared to some situations,” Sharon said. “Just the human side of me also wants to be with my grandson.”