With proper precautions, moving houses is still allowed during the coronavirus shutdown. 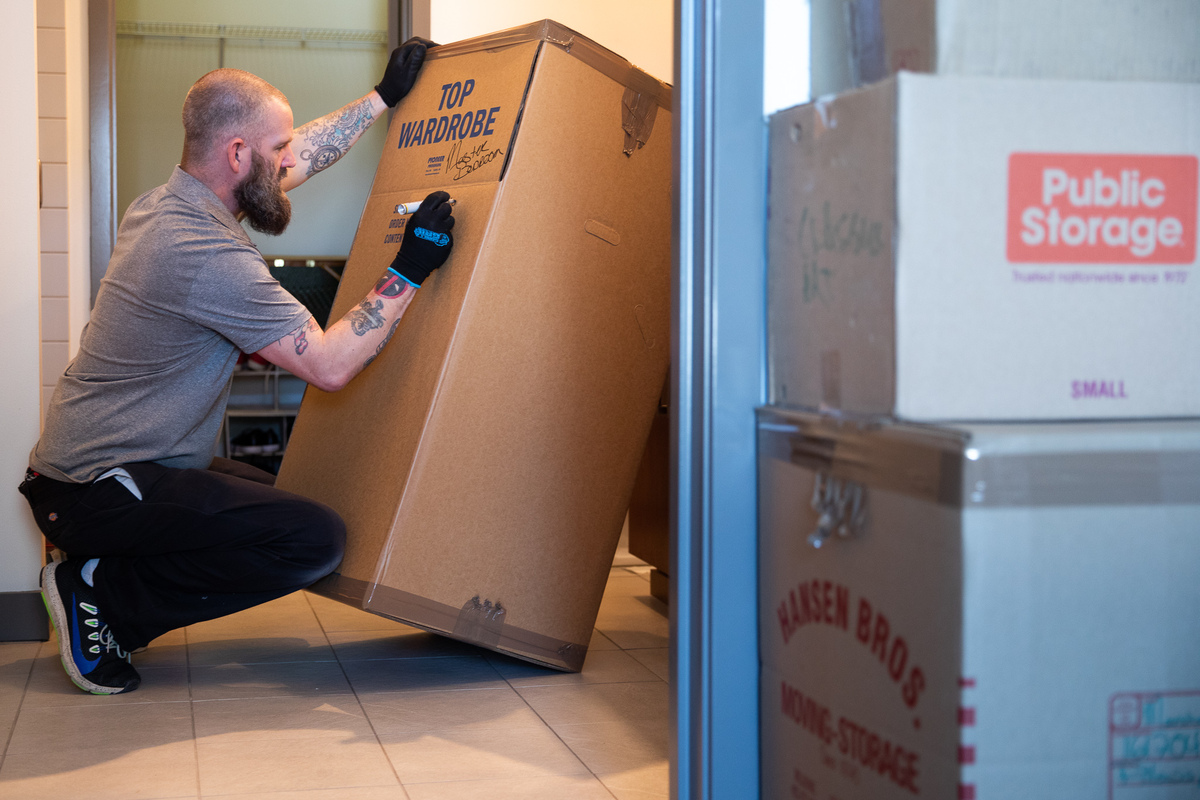 A little more than a week before Rob Smith and his family were scheduled to close on a house in Seattle’s Matthews Beach neighborhood, Gov. Jay Inslee’s “Stay Home, Stay Healthy” order went into effect.

“We put an offer in on a house about three or four weeks ago, right before we recognized how serious everything was,” says Smith. “Now it’s like, ‘Can we still do this? Are people who deal with real estate transactions able to work?’ ”

Their move has been complicated by the fact that Smith’s parents, both in their 70s, relocated in January from Texas to a spare room in the Columbia City house he rents in preparation to live permanently in a new home with Smith, his wife and their two children. Because his father has preexisting health conditions, Smith says their family took extra precautions while viewing houses.

“For the house we put an offer on, my dad didn’t even go to the showing. He was too paranoid,” Smith says.

For Washingtonians who have found themselves in the midst of moving during the coronavirus crisis, the path forward hasn’t always been clear. When Inslee’s “Stay Home, Stay Healthy” began on March 26, moving companies and much of the real estate industry were not included in the list of essential businesses that could continue operating. But updated directives from the governor’s office have since given them the green light — so long as they take adequate precautions.

“Yes, it’s OK to move,” says Eric Rovner, vice president of marketing with Hansen Bros. Moving and Storage, “with the following provisions: Are you healthy? Is your household healthy? Is the destination to where you're moving healthy? Is the moving company you’re choosing taking all the prescribed precautions and then some more?”

Along with updating social distancing practices and asking crews how they’re feeling each morning, Hansen Bros. has begun providing every truck with hand sanitizer, disinfecting wipes and gloves. The familiar handshake greetings once practiced by moving crews are long gone, and cost estimates — required by law — are now offered virtually. 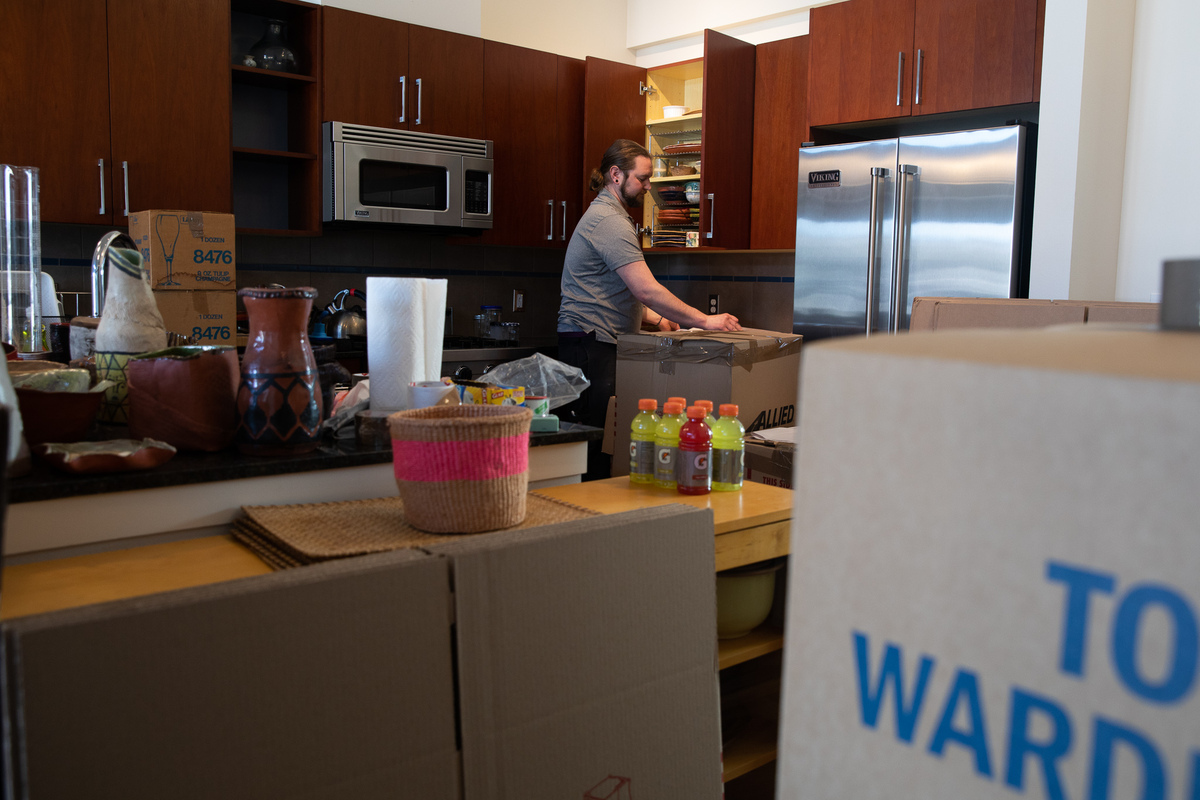 Hansen Bros. employee John Melrose packs boxes at an apartment in Seattle's Eastlake neighborhood ahead of a client's move to a new home in Arizona, April 6, 2020. "I've been extra careful to get my work clothes off and take a shower quickly after I get home," Melrose says. "I'm not worried about myself so much, but more concerned about bringing the virus to elderly folks that live in my neighborhood." (Matt M. McKnight/Crosscut)

Hansen Bros. employee John Melrose packs boxes at an apartment in Seattle's Eastlake neighborhood ahead of a client's move to a new home in Arizona, April 6, 2020. "I've been extra careful to get my work clothes off and take a shower quickly after I get home," Melrose says. "I'm not worried about myself so much, but more concerned about bringing the virus to elderly folks that live in my neighborhood." (Matt M. McKnight/Crosscut)

For renters like Alec Fisher, a graduate student at the University of Washington, even renewing an existing lease involves uncertainty. Fisher’s lease is up May 1, and this week they began the search for a new person to share their two-bedroom apartment in the Central District. These days, that means posting the available room online and taking Zoom and FaceTime calls with complete strangers.

“It’s really difficult to meet anyone in a public place,” Fisher says, adding that they’d usually set up a coffee meeting with a potential roommate before inviting a new person to the house.

“It is strange not getting to meet someone in person before they would be able to move in,” Fisher says.

In dealing with renters who are moving, tenants and landlords alike are expected to follow strict social distancing guidelines.

Jonathan Pease, who signed a lease on a two-bedroom house in Beacon Hill the last week of March, says he and his new landlord checked in with each other over the phone before meeting in person to make sure they were both comfortable doing so. When Pease met the new landlord at the property, he brought his own pen.

“We laid out some ground rules: We were going to meet and talk outside and keep our distance, and only one of us in the house at the time,” says Pease.

Pease toured the house alone, but because the day was exceptionally windy, he and the landlord stood in the open garage to finish signing documents.

Creative signing arrangements and virtual workarounds have become the new normal for home buyers, too. Under the most recent guidance from Inslee, essential real estate work includes a few caveats: no open houses, in-person meetings with agents are permitted only for viewings or signing documents, and no more than two people at a time — broker included — can tour a property.

Home stagers, appraisers, inspectors and professional photographers can enter a house by appointment only and must be limited to two people inside at once. Jaime Stenwick, designated broker with Re/Max Junction in Seattle, says that more than 90% of home buying begins online these days, so professional photographs or videos of houses on the market were important even before the industry switched to virtual interactions.

“For those that are really earnest about buying and selling, it's not slowing anyone down right now,” Stenwick says. But she adds that the future remains uncertain. “There’s more fear and trepidation about what’s going to happen.”

To adhere to social distancing guidelines, notaries with Rainier Title have been driving to the residences of new homeowners, asking clients to accept documents with gloves and masks on, and have been sitting in their cars while the home buyer reads through no fewer than 124 pages of loan paperwork. But Rainier Title CEO Bill Bergschneider says several employees were approved to do remote online notarizations as of April 7.

Being able to sign documents electronically helped Smith and his family close on their new house April 3. But he says that had their offer fallen through, his family probably would have waited until after the COVID-19 crisis to resume the search.

“We feel like we just got in under the wire,” says Smith. “Maybe even another week-and-a-half delay, we would've gotten to the point where we wouldn’t have gone to look at any houses at all.” 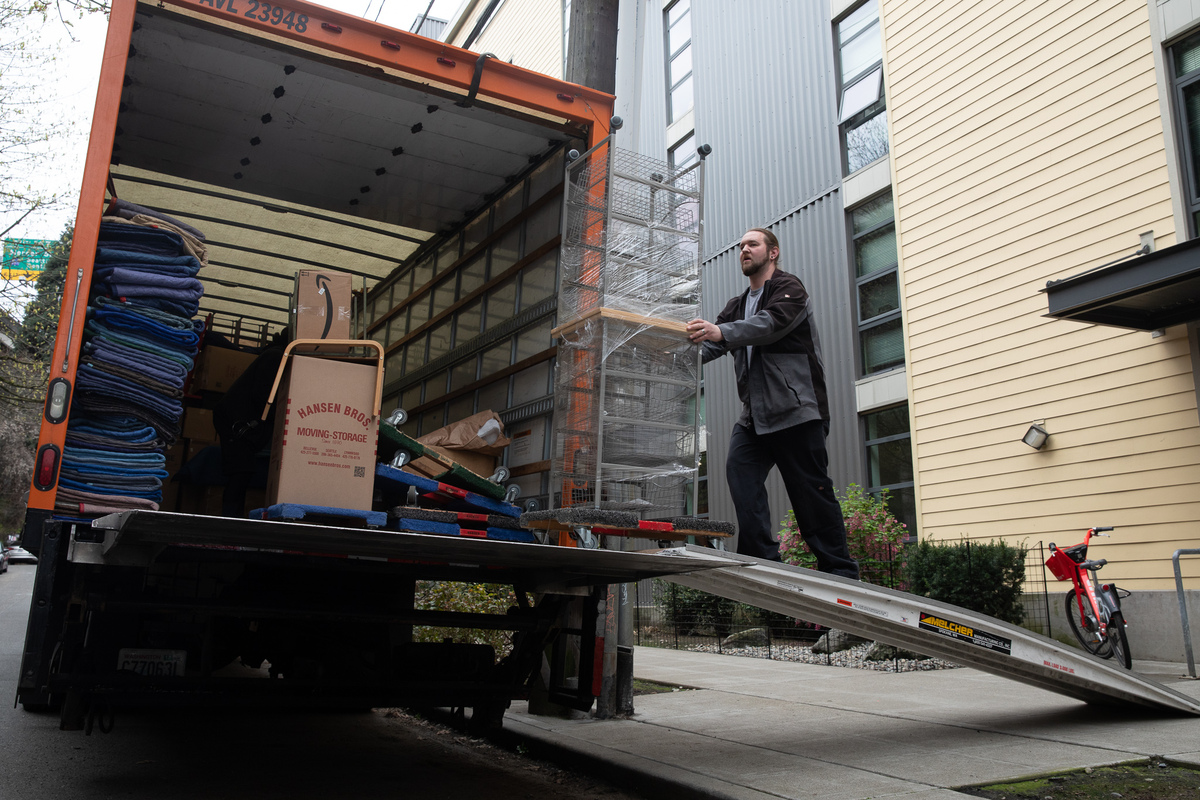 Because the process of buying or selling a home can take weeks and sometimes months, the effect of COVID-19 on the housing market isn’t yet clear. Although numbers released this week by the Northwest Multiple Listing Service show a jump in home prices during a busy March, in the same press release, Matthew Gardner, chief economist at Windermere, described last month’s data as “essentially irrelevant, given the fact that the economy went into freefall during the month.”

An analysis of market data by real estate brokerage Redfin found that pending home sales in Seattle were down 28% for the week ending March 29, compared with the same time last year. New listings were down 26% over the same period.

“The buyers who were in motion to purchase a house are already starting to come back into the market a little faster than sellers are putting their homes on the market,” says J. Lennox Scott, CEO and chairman of John L. Scott Real Estate.

Peak moving season typically lasts from May until September, so the impact of COVID-19 on moving as a whole is yet to be determined. Though most states have deemed moving essential, allowing even cross-country moves to proceed unhindered, guidance differs from place to place. The American Moving and Storage Association recommends that those planning a move ensure that they’re up to date on local and state rules before heading to a new location. Outside of the United States, guidance differs, too: Britain, for example, has outright urged its citizens not to move unless absolutely necessary.

For those who do opt to hire a moving crew, the Washington Movers Conference recommends providing the crew access to a sink, soap and paper towels throughout the day, and purchasing new moving boxes instead of using recycled ones from friends or neighbors.

John Howard, business development manager at Eco Movers Seattle, says he hasn’t had a conversation with a client over the past two weeks that hasn’t involved COVID-19.

“Moving is an intimate thing, and there's really not a way around that,” says Howard. “But if you take precautions, if you’re smart about the way you’re around people, it can be done safely.”