Coronavirus has no borders, but your county’s health funding does 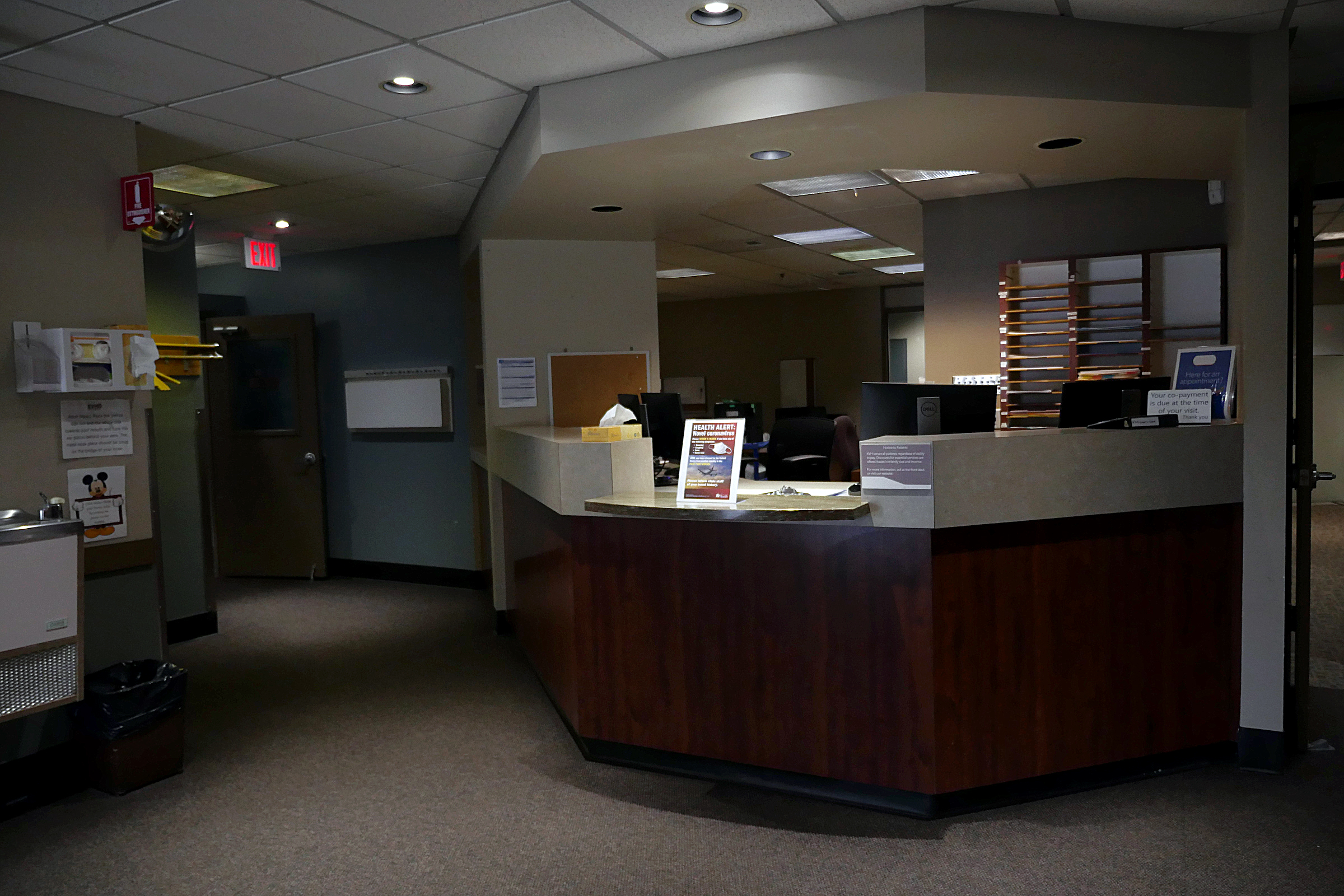 Inside the lobby of a new COVID-19 popup clinic in Ellensburg, where patients will be immediately triaged into its exam rooms and kept out of the emergency room, on March 5, 2020. (Emily McCarty/Crosscut)

Brady Woodbury is not an epidemiologist, but lately he's had to act like one. As the administrator and only salaried employee of Asotin County Public Health, in Washington's southeast corner, Woodbury bears most of the cascade of extra work that's arrived with the coronavirus.

When an elderly woman came down with COVID-19, it was Woodbury's job to find her four children, urge them to self-isolate and then find their recent contacts and tell them the same. When construction companies refused to pause their projects, it was Woodbury who was supposed to shut them down. And as the county sought to scale up testing, there was Woodbury, helping things get running.

He hasn't taken a day off in a month.

Even before the coronavirus, public health jurisdictions across Washington state were starved for steady funding. But zoom in further and there's another problem: Among the state's 35 health jurisdictions, there are vast disparities in resources and infrastructure. Remote Asotin County, at the corner of Oregon, Washington and Idaho, has one of the smallest public health budgets in the state.

The coronavirus, of course, does not have jurisdictions, and the fear is that as certain counties tamp down its spread, it will find fertile ground in less prepared — and less adequately funded — places and echo back through the state.

"We don't have anyone who's trained to do it, so it falls to me," Woodbury said of the laborious work to track and contain the virus's spread. "I'm the administrator and I've done all of our COVID contact tracing, every one. And it gets difficult ’cause I'm not trained in that. I mean, I took epidemiology classes when I was in school almost two decades ago, and I understand the concepts of it, but I haven't done that boots-on-the-ground work until now."

Asotin County, with its population of nearly 23,000, spent $26 per resident for public health in 2018, the last year for which the state published jurisdictional funding data. That was less than all but six other jurisdictions in Washington. The Whitman County Health Department to its north spent just $13 — the least in the state — and its local county government was one of only two in Washington to add nothing to its allocation of state and federal dollars. In Yakima County, there is one public health worker for every 8,800 residents, the highest ratio in the state.

Snohomish County, the site of the first major cluster of COVID-19 cases in the state and country, spent less per capita on public health in 2018 — about $20 — than any other jurisdiction except Whitman. For every public health employee, there are over 6,000 residents.

By contrast, Seattle and King County spent $108 per capita on public health in 2018, including $48 from local government. It has one employee for every 1,500 residents.

Apples-to-apples comparisons don't always hold up; the 35 jurisdictions are structured differently and have varying degrees of responsibility.

But even taking into account their differences, the reality is some counties are funded less than others, occasionally by wide margins. As Washington looks toward its future, these yawning gaps between sometimes neighboring jurisdictions could complicate the task of slowing the virus and repressing another outbreak.

"This is a really valid concern," Gov. Jay Inslee said in a recent press conference, "because some of our smaller counties have one, two people to tackle this. The state is going to need to help all the counties, but particularly those counties."

When it comes to public health in Washington, counties are the final word. The result is a quilted system, with each local jurisdiction built slightly differently. Some counties combine their efforts, like Benton and Franklin or Douglas and Chelan. Sometimes, cities and counties form one public health department, like Seattle and King County or Tacoma and Pierce County.

Some jurisdictions include prisons or human services under their public health umbrella, while others don't.

That patchwork approach allows each to respond to their communities' unique needs; what's emergent in King County is likely different than in Mason County. But it also means there is no consistent approach to budgeting.

"Nobody fully owns who funds public health," said Theresa Adkinson, administrator of the Grant County Health District. "Each county has a responsibility to fund public health, but there's no set formula for how they fund us…. When you look at how each of us are funded, the pie chart looks incredibly different for each of us and that leaves us vulnerable."

The last time public health in Washington had steady funding was in 1999. But then came the state's first battle over the price of car tabs — Initiative 695, led by serial initiative promoter, Tim Eyman — and the stream went dry.

What's taken its place are various pots of state and federal money that fluctuate from year to year. The task of filling in the gaps is left to local government. The result is a broad range of spending and directives between each county.

"If you look at the past 20 years since [Initiative] 695, public health funding has been really hand to mouth," said Jeff Ketchel, executive director of the Washington State Public Health Association.

The Washington Legislature considered a bill in the 2020 session that would have used surplus funds from nonprofit health insurance carriers as a dedicated source for public health, but it never made it out of committee.

In Kitsap County on the western side of Puget Sound, the public health district is in the middle of the pack when it comes to funding. Nevertheless, for the past five to six years, local government has not increased funding except to keep up with personnel costs, said Keith Grellner, administrator of the district. "We have to compete with every other county department and local special purpose district for funding every year," he said. "We all compete."

Grellner has pulled nearly everyone from their normal duties to help with contact tracing of COVID-19. But the result is it's taking eyes off other issues. In the past three months, for example, Kitsap has seen a worrying increase in sexually transmitted disease transmission, Grellner said.

In Grant County, Adkinson said the district adds to its funding with outside grants. But that money is so inflexible, she may end up with unspent dollars over the coming months that can’t be used for COVID-19 response.

Despite the progress against the pandemic in Washington, models continue to show enormous risk of an outbreak that could dwarf the first round of infections. A tenet of controlling future outbreaks is tracking the virus as certain parts of the economy reopen. Doing so necessitates a coordinated effort across the state, public health experts say.

"We could be doing a great job here. but then if our neighboring counties outside of this region are not doing well, it will eventually come back and affect us," Dr. Anthony Chen, director of health with the Tacoma-Pierce County Health Department, said in a recent call with reporters.

Ketchel of the Washington State Public Health Association compared it to a chain in which each link is not equally strong.

Inslee has promised to hire 1,500 disease investigators to be spread across the state. For the areas with less of a public health presence, he pledged "disproportionate state assets."

The state also set aside $200 million in emergency COVID-19 response funds, some of which went to local health jurisdictions. Grellner with the Kitsap agency said the district saw $309,000 in April as part of that package. It was welcome, but his district had already spent $326,000 the previous month on COVID-19 response, so that infusion essentially covered its deficit.

"Now we're spending money that there is no promise for reimbursement yet," he said.

Grellner said the district  may get up to $400,000 from the federal government, but without more infusion, it will go into debt. That makes him worried about what the district will do if the virus returns with force.

"We may not get money to backfill all the money we're already spending, which means we're going into deficit mode, which means we'll have less people," he said. "So it's not a great outlook right now, unfortunately, if we get hit with COVID again."

When Woodbury came to Asotin County in 2011, he had 13 employees. Today, he's down to six, including himself. They don't have a communicable disease expert. There used to be nurses on staff, but they've been let go, and the programs they administered, including immunization, have evaporated.

Resources are so thin that Woodbury was forced to become certified to conduct septic inspections; state law says someone has to be and there was no one else but him.

"We don't have the presence in our community that we would like to have," he said. "We play an important role in our community, but because we're so limited on what we can do, we have fewer and fewer programs and less and less influence."

Woodbury will sometimes spend days tracing a case. He devotes hours on the phone with elected officials, angry construction managers, medical professionals and those who may just be learning they're COVID positive. He has applications waiting for an environmental health inspector, but he hasn't had the time to review them. He was recently served a lawsuit by a man whom Woodbury had barred from distributing home-processed game meat at a food bank. His work days now are never less than 10 hours, but routinely run to 15.

"It's overwhelming," he said. "It's important work and I'm energized to do it, but there's no way I could keep this up."