As one of King County's largest shelter providers moves clients into a hotel, advocates seek to avoid a return to the status quo. 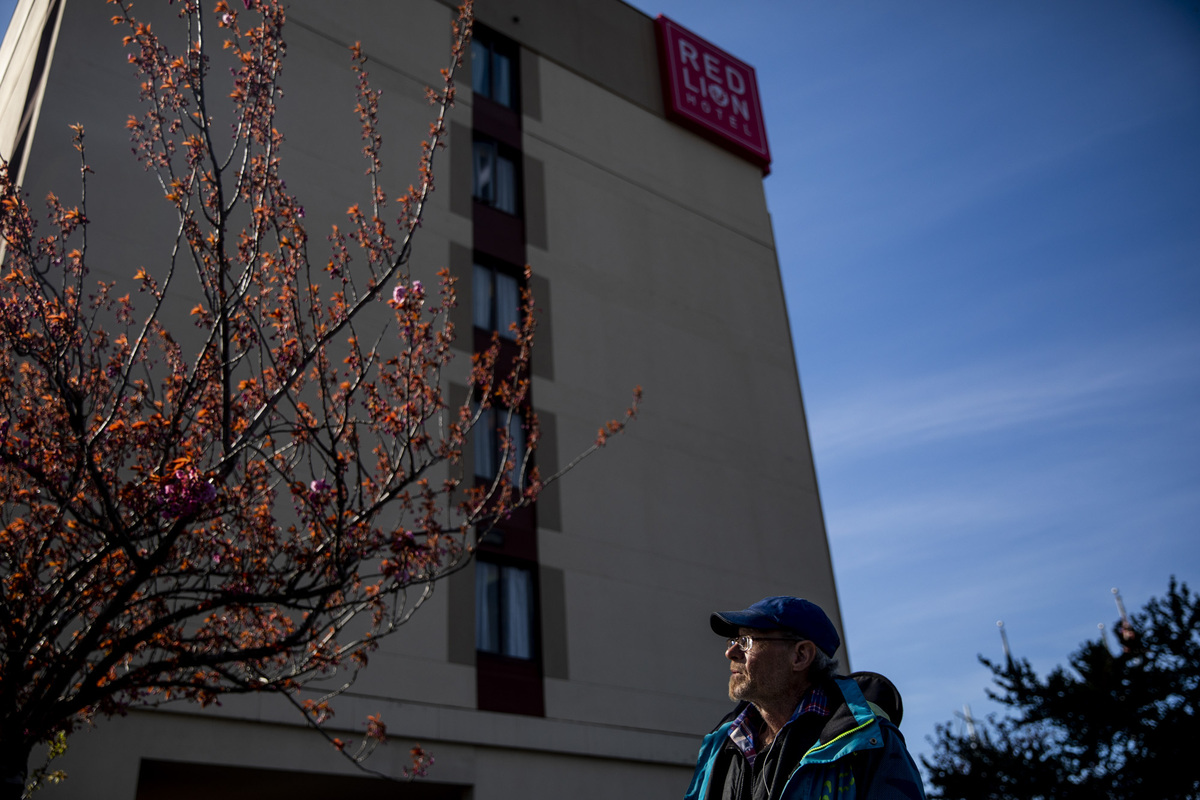 Allan Loveday is one of 53 people experiencing homelessness that were relocated from the Downtown Emergency Service Center shelters to a Red Lion Hotel in Renton on April 9, 2020. There will be about 200 people total relocated to the hotel over several days. Five clients of DESC tested positive for COVID-19 and providing isolation through the hotel is intended to help prevent an outbreak. (Dorothy Edwards/Crosscut)

In the heart of Renton, chain link fences ring the Red Lion hotel, which stood empty last week after the coronavirus dried up demand for its rooms. But on Thursday, new guests began passing through its lobby: 53 homeless clients of the Downtown Emergency Service Center arrived there by Metro buses on loan from the county.

More checked in Friday and Saturday as well, rounding out a complicated logistical feat of transporting about 200 shelter residents into the private rooms of an abandoned hotel. The task of moving operations south, intended to prevent a widespread coronavirus outbreak among clients, has left parts of DESC's expansive downtown Seattle shelter empty for the first time in 40 years.

In many ways, for those who now have a door they can lock, the rooms are less a respite from the new residents' fears of infection and more from their typical reality in a crowded homeless shelter; several of the occupants were hardly concerned about the coronavirus at all.

As shelter operators and service providers scramble to provide safer spaces for their clients during the COVID-19 outbreak, it’s not lost on them that some of these recent changes are steps for which they’ve agitated for years.

Now with the crisis straining systems and putting vulnerable populations at risk, the coronavirus has only highlighted the ongoing failures of the region to address homelessness. It’s difficult to imagine returning to that normal, providers say.

“For a long time we’ve made that difficult choice of prioritizing quantity over quality because it’s better to have someone indoors than it is to be outdoors,” said Daniel Malone, executive director of the Downtown Emergency Service Center. “I don’t think that’s really an acceptable stance for us to have anymore.”

He added, “I hope that we as a society do not go back to the status quo from February and instead we’ll say, ‘that way of doing things is a relic of the past and we’re going to choose to do things differently.’ ”

Whatever optimism may exist that King County is “bending the curve” of coronavirus transmissions is not felt by those who work in the world of social services. As those with homes distance themselves from the threat of infection, the hundreds of people sharing close quarters in shelters have their own curve to reckon with.

“In a way it makes me worried that the general population might be feeling encouraged,” said Nicole Macri, DESC’s deputy director for strategy and a representative of Seattle’s 43rd district in the state Legislature. “Those of us working in homelessness response still need to be very, very worried.”

Service providers and government officials early on sought to reduce the density in some of the region’s most crowded spaces. But as the pandemic has marched forward, even that approach felt insufficient.

Public health officials announced last week that 27 people at 12 homeless shelters in King County had tested positive for COVID-19, including in a Seattle Center location opened specifically in response to the pandemic. Five of those positive cases were clients of DESC.

The scope of the problem could be even wider. Macri said that upwards of 15 percent of their clients are showing COVID-like symptoms — or as many as 80 people. In San Francisco, one shelter had 70 positive cases. In Boston, where they cast a wide net and tested about 600 people experiencing homelessness for COVID-19, 30 percent were found to be positive. In the general population, between 9 and 17 percent of coronavirus tests come back positive, depending on the location.

With so much unknown about the disease — and shifting research about the effect of asymptomatic carriers — the stakes are exceedingly high in crowded shelter settings.

“If you live in a home and you have a job that you can do by Zoom and you’re just with your household members and you have an asymptomatic disease it’s not such a big deal,” said Dr. Margot Kushel, MD, Director of the Center for Vulnerable Populations at the University of California, San Francisco. “If you are in a homeless shelter with 100 other people, many of whom carry incredible risk were they to become infected, asymptomatic spread is a very big deal.”

Steps to prevent infection in local shelters have been shifting. It started with deep cleaning, then progressed to isolating symptomatic clients and encouraging more use of personal protective gear for staff. To decrease crowding, clients have been moved into makeshift shelters and community centers.

But with limited resources and space, it’s been difficult.

“Despite having greater distance, you can’t truly have the required social distance between people in congregate settings,” said Malone.

So DESC staff began talking with city and county officials about finding a place where their clients could have individual rooms. After looking at several locations, the manager of the Renton Red Lion agreed. Two other shelters — Catholic Community Services and Sophia Way — have also begun moving clients into hotels.

The task of relocating that many people was daunting, but it was better than the widespread outbreak feared by staff.

“Nothing seemed so daunting or more compelling than the fact that we’re reducing the risk to clients by giving them individual units,” Macri said. 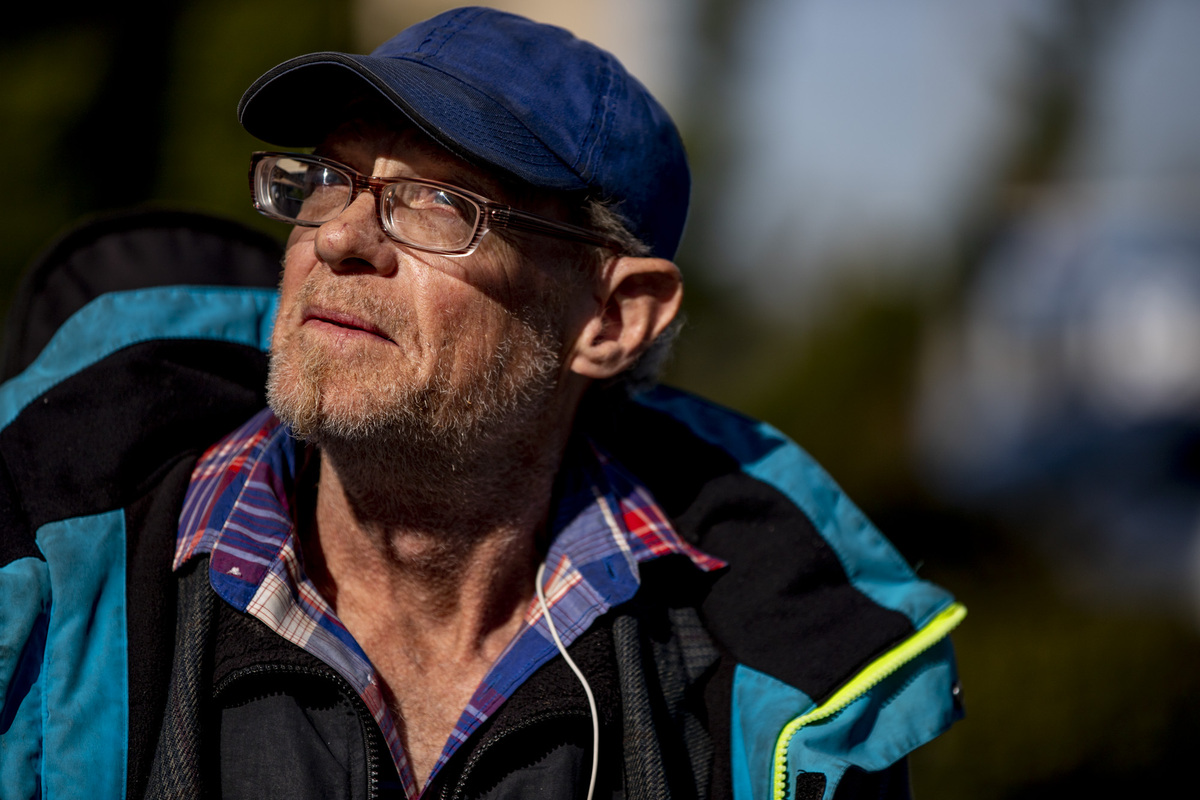 Allan Loveday is one of 53 people experiencing homelessness that were relocated from the Downtown Emergency Service Center shelters to a Red Lion Hotel in Renton on April 9, 2020. (Dorothy Edwards/Crosscut)

Allan Loveday is one of 53 people experiencing homelessness that were relocated from the Downtown Emergency Service Center shelters to a Red Lion Hotel in Renton on April 9, 2020. (Dorothy Edwards/Crosscut)

A room of one's own

For Nadine, the DESC shelter was a “last resort.” She had not been a regular guest, but landed there in March after a rough patch with her job and family. After just a few nights, she was ready to leave. It was cramped and she felt unsafe. She knew about COVID-19 and how easily it could spread through crowds. “I’d rather sleep on the streets,” said Nadine, who asked that her last name not be used.

But staff urged her to stay, knowing they’d soon have space available in the Red Lion. Standing outside the hotel's lobby Thursday, Nadine began to tear up. “We have a room, a bed, a shower,” she said. “There’s no fricking way we’re this blessed. I’m just trying to get my shit together and on my feet and this is the perfect situation.”

In total, about a third of DESC’s shelter clients will get space in the Red Lion. King County’s lease lasts for 90 days. Rooms will cost between $39 and $59 per room per night, according to Sherry Hamilton, communications director at King County's Department of Community and Human Services.

The gym is closed, but residents will receive three meals a day there and medical care if they need it. The staff, all from DESC, stood, somewhat awkwardly, behind the desk in the lobby like concierges. One client, Yolanda Clark-Green, carried Thursday’s edition of USA Today with her back to her room.

“It’s like having your own place,” said Trinity West, a longtime off-and-on client of DESC. “I’ve got a key. I don’t have to answer to nobody.”

Alison Eisinger, director of the Seattle/King County Coalition on Homelessness, was cheered by the move, but said it highlights the need for a systemwide shift beyond the coronavirus. “Right now there is an opportunity to say we are never going back to the way it was before,” she said.

DESC is a nationally respected organization that pioneered the “housing first” model of prioritizing a home over sobriety or other hurdles. It’s also pushed to include more on-site healthcare for clients; the organization is currently developing a housing project that will include a full-scale clinic.

In addition to its permanent housing, DESC has also run congregate shelters for more than 40 years. As an organization, it subscribes to a harm reduction model of “better is better” — meaning that given the choice between sleeping outside and sleeping in a shelter, the shelter is preferred, no matter how flawed.

“The thing about congregate shelter for us is we’re immensely proud of it, but also have always thought from the very beginning that this is a wholly inadequate way to take care of human beings,” said Malone. “We’ve accepted it, however, because that’s what we had the resources to be able to do and we always thought it’s temporary for people and gives them the ability to survive while we find housing for them.”

But in the last six months, even before the coronavirus landed in Washington, the organization was starting to shift its thinking, said Malone. They weren’t ready to give up congregate shelters, but felt they needed to find a way to create more space for clients.

That thinking has now accelerated, in part because even their base assumption — that shelter is safer than the streets — is up for debate with the presence of a highly infectious and sometimes deadly disease.

The flurry of action to create more space for people experiencing homelessness comes as the community’s health is intertwined with the actions of individuals.

The question is what comes after COVID-19. Malone said he’s mulling this everyday, without a clear answer yet. For Macri, she’s not sure exactly what that looks like either, but she knows it would be hard to see the halls of their shelters fill once again. 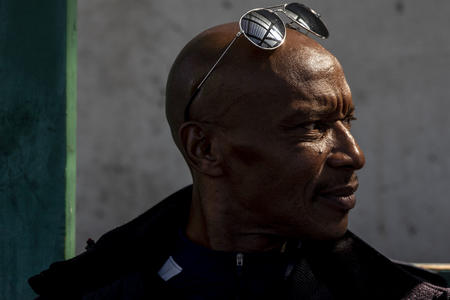 As baby boomers age, many are finding themselves in a system not set up for late-life care, without anywhere else to go.

As baby boomers age, many are finding themselves in a system not set up for late-life care, without anywhere else to go.