The first known evidence of the Seattle Freeze

Post-war growth in 1920 Seattle came with a coldness toward newcomers. Some city boosters suggested a "thaw" was in order. 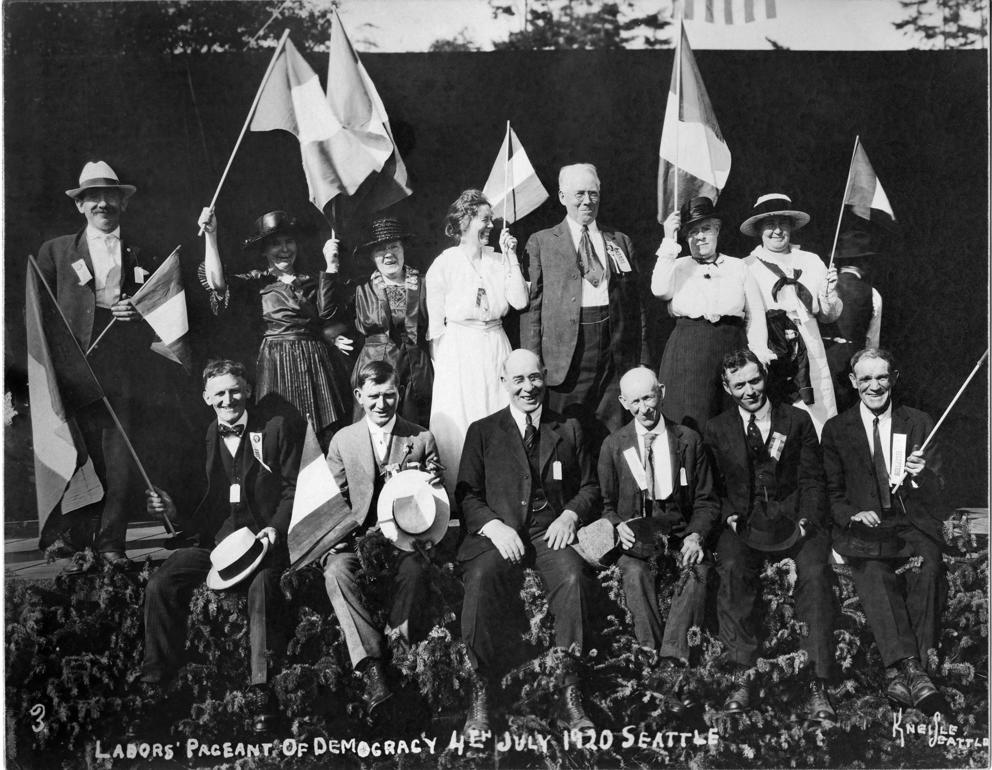 A patriotic pageant in Woodland Park celebrating democracy around the world, in 1920. In the tumult after World War I, Seattle boosters wanted locals to embrace both patriotism and a more welcoming attitude toward immigrants and strangers. (Museum of History & Industry)

In the spring of 1920, Seattle was emerging from some very hard times. World War I had taken a toll. Labor strife and the Seattle General Strike had riven the city. A year earlier, the Spanish flu pandemic reached its crescendo, resulting in more than 1,500 deaths in Seattle alone, nearly 6,000 statewide. The mayor who had steered the city through these crises, Ole Hanson, had resigned before the end of his term, not long after anarchists sent a package bomb to his office.

The postwar landscape saw great division in America. A shootout in Centralia on the first anniversary of the Armistice between American Legionnaires and International Workers of the World activists resulted in a lynching. In the 1920s, a Red Scare swept the country and the Ku Klux Klan began to rise nationally, with strong membership in the Northwest, including in Portland and Seattle. A surge of anti-immigrant sentiment took hold, and Washington limited immigrants and restricted “aliens” from owning or leasing land. The perennial tug between urban and rural intensified. It seemed that the country’s social fabric was tearing apart.

Meanwhile, Seattle was growing. The 1920 census showed more Americans were moving to cities; the wartime boom on Puget Sound had seen the city’s population swell from 237,000 in 1910 to 315,000 in 1920, an increase of about a third. That was a slower pace of growth than the previous decades, but housing was in short supply — and wartime profiteering landlords seized the moment by raising rents. At the very time that the wartime effort sought to promote patriotic unity amid the trauma of the influenza pandemic, Seattleites were ordered to socially isolate. Gathering with strangers, they learned, could be deadly.

This is the first in a two-part series on the origins of the Seattle Freeze. You can read the second part here.

For the first time, Seattle’s attitude toward newcomers was challenged. In the boom times, locals had welcomed growth and urbanization, and even celebrated the city’s transformation during the Klondike gold rush by throwing a world’s fair in 1909. But now, a frigid social attitude took hold in the Emerald City. And a cure was proposed.

I have been on the lookout for the origins of the so-called Seattle Freeze for some time. When did Seattleites first begin discussing the local attitude of distancing from newcomers and strangers? The city had a history of racial discrimination, but this was about the majority-white population distancing among themselves, emphasizing the gap between longtimers and newcomers. I had found a 1946 newspaper reference to the phenomenon, and an earlier discussion, in 1942. But while researching the pandemic of 1918-1920, Ben Helle, the ever-sharp-eyed archivist at the Washington State Archives, came across a Seattle Times clipping that suggested conversation about Seattle’s frigid nature as far back as the spring of 1920.

The headline on the clipping caught my eye: “Seattle Expected to Thaw Out.”

The accompanying story detailed a plan by the Seattle Chamber of Commerce to initiate a “Talk to Your Neighbor Day” for April 12, 1920. The idea was first floated by the head of the chamber’s civic affairs bureau, Arthur Priest, who quit his job as dean of male students at the University of Washington to take a position promoting and lobbying for the chamber’s agenda.

Another Times article previewing the idea, on March 26, laid out the problem:

“It is being charged that old time Seattle residents are not inclined to converse with people who share their seats on the street cars. Strangers in the city maintain that their polite inquiry regarding the probability that it will rain tomorrow is usually met with a grunt.

“Thousands will move to Seattle this year. They will miss the sights of the town pump, or old Simon Smith’s general store and other familiar sights. But they want to like Seattle, and it’s up to Seattleites to see that they do, say advocates of the new plan.”

The report goes on, “Seattle people have been accused of being too cold and distant.”

The article then imagines a number of dialogues between Seattle residents and newcomers that reduced nearly every topic to brusque one-word replies from the locals.

In a related March story, the woe of a newcomer was expressed by an unnamed source: “’People act as if you’re going to steal their pocketbooks if you remark about the weather,’ complained one lonely soul from Croswell, Mich. ‘This isn’t the friendly, hospitable West that I was led to believe existed.’ ”

In the same story Priest talked about how friendliness doesn’t cost anything and makes people feel welcome. “If a stranger gets all excited over the story of his neighbor’s wife having a ‘run in’ with the landlord, he’s going to feel that he has been accepted in Seattle as ‘folks.’ ” In other words, sharing trials and tribulations helps build community, despite lousy landlords.

The chamber’s plan for “Talk to Your Neighbor Day” was a specific local response to a broader, national initiative called “Neighbor Day,” which was set for June 24, 1920. It was conceived by outgoing Secretary of the Interior Franklin K. Lane, a conservationist, former California politician and ex-Tacoma newspaperman.

In the tumult after the war, Lane wanted Americans to embrace both patriotism and a more welcoming attitude toward immigrants. A buzz word of the time was Americanization, used by nationalists to oppose immigrants and foreign influence, but Lane used it to encourage assimilation. Neighbor Day would be welcoming, helping immigrants fit in and maybe learn English. Lane also came up with the idea for Flag Day, which stuck. He believed that promoting good, old fashioned neighborliness was a way to heal the country’s divisions in the wake of wartime trauma. He even had the support of a powerful Catholic cardinal, James Gibbons.

In touting Neighbor Day, Lane outlined its need: “Community life as it existed in the early days is practically dead. Except in the rural districts intimate acquaintance between neighbors has disappeared. … Unless we are property owners we take little interest in the block on which we live, and the residents of apartment houses in big cities do not even know who lives under the same roof with them.”

Many cities across the country, including Spokane, adopted the neighborly idea, though the date of its observance varied. It was specified, however, that being friendly to strangers should recognize binary gender boundaries. Men should talk to men and women to women, it was advised. According to The Seattle Times, “Street mashers will not be permitted to take advantage of the ‘Speak to Your Neighbor Day.’ It isn’t necessary that young men shall observe the occasion as a chance to ‘flirt.’ ” That suggests a whole different social problem in a world where women now had the right to vote and were smoking cigarettes in public. Seattle was still majority male in 1920, though less so than a decade earlier. Still, the city also was in recovery from a well-deserved reputation as an “open” town for males seeking “pleasure,” though women and other reformers were fighting back against prostitution and human trafficking. Prohibition and strengthening the social safety net for women and children were also on their agenda.

For all the pre-event headlines and ballyhoo, in the digital searching I could do from home, I found no account of how the day actually went in Seattle. A short item in The Times on April 12 announced that “Today is ‘Speak to Your Neighbor Day.’ All day long ‘howdy’ and a smile were the password and the sign of greeting in Seattle.” Arthur Priest said the organizers would try it again next year. That apparently didn’t happen. Little or no mention of “Neighbor Day” in Seattle could be found the following year. Priest had resigned to take a national job to travel the U.S. promoting the Phi Delta Theta fraternity, where presumably his skills at selling affability were more welcomed. On the national scene, the two biggest Neighbor Day boosters, Franklin Lane and Cardinal Gibbons, died in 1921. Meanwhile, political, racial, ethnic and social divisions accelerated as the country headed for the Great Depression.

The 1920s version of Seattle Freeze did not, apparently, have an immediate remedy. Though the “Freeze” term had not yet been coined, advocates of a “thaw” in local social interactions were explicitly noted at the end of World War I. It is still a subject of discussion 100 years later. Apparently it wasn’t resolved by saying “Howdy” for a day.

Seattle’s hostility to people of color has also long been examined — redlining, internment, and other forms of racial and ethnic exclusions marred Seattle society throughout the 20th century. But given all that, the cold shoulder or aloofness of the city’s longstanding white majority toward one another has been a long-baffling aspect of local culture.

Twenty years after Seattle’s “Talk to Your Neighbor Day,” the issue of the city’s treatment of newcomers would blow up again in the local press, this time during World War II, brought to head by a woman who wielded her frustration in sharp, well-written words that riled the locals.