Greater Idaho and the ugly history of Northwest secession movements

The latest effort, rooted in so-called 'rural values,' seeks to supersize the state of Idaho with parts of Oregon and California. 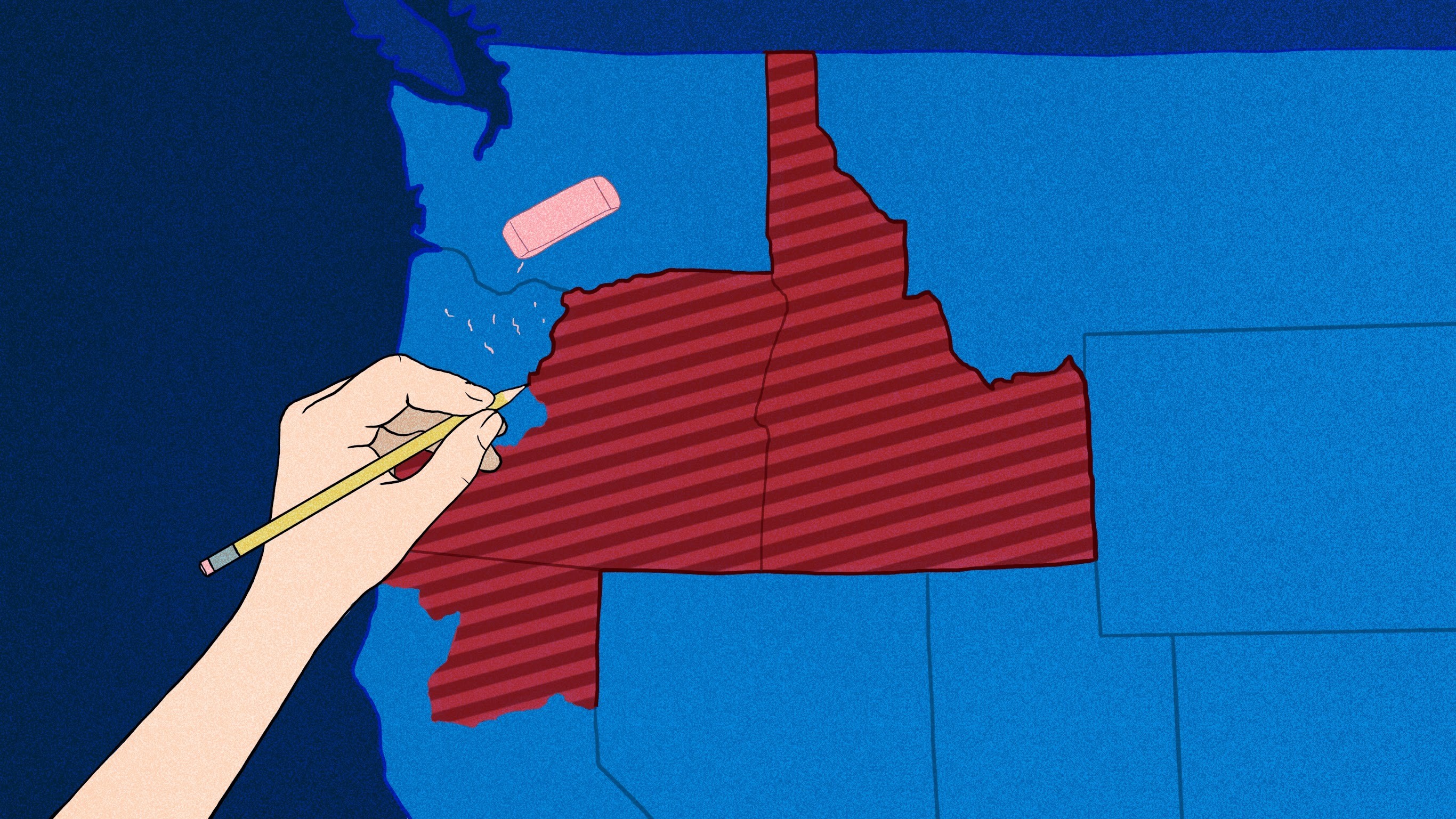 An illustration of the map proposed by followers of the "Greater Idaho" movement. (Valerie Niemeyer/Crosscut)

In a time of pandemic, political discontent is a preexisting condition. A recent example: Ammon Bundy, who headed the 2016 takeover of the Malheur Wildlife Refuge in Oregon, has been holding meetings in Idaho to push back against the state’s “stay at home” order to limit the spread of COVID-19. The New York Times calls it a “Liberty rebellion” against coronavirus restrictions; Idaho medical professionals are aghast.

It shouldn’t be a surprise, though. The fault lines in the Northwest are always active, and help explain perennial efforts to redraw the region’s map to accommodate political and cultural homogeneity. The Cascadia independence movement, the potential state of Liberty carved from Eastern Washington and occasional speculation about the “ghost” state of Jefferson in southern Oregon and northern California are examples of such efforts.

Could this pandemic rebellion provide impetus for the latest concept to gain attention? Greater Idaho, an idea being embraced in some parts of Oregon, would see southern and eastern Oregon and northeastern California secede from their respective states to join — and supersize — the state of Idaho. At least three Oregon counties, Douglas, Josephine and Umatilla, are working on petitions to advance the Greater Idaho cause.

Read more about the history of slavery in the Pacific Northwest.

Mike McCarter is a spokesman for Move Oregon’s Border, a group pushing the effort. He told Oregon Public Radio that Greater Idaho is “a movement to try to maintain our rural values.” The core lament from McCarter and others is that Oregon is increasingly ruled by liberal urban areas; rural Oregon, Greater Idaho supporters argue, needs to hook up with the more simpatico leadership in Idaho, where Republicans dominate state politics. Under the new map, Portland, Salem and Eugene would stay behind in Oregon while Medford, Oregon, and Redding, California, would become part of the land of “famous potatoes,” and perhaps of the coronavirus’ militant violators of social isolation.

The movement echoes contentious politics in Oregon, which have seen Republican legislators literally leave the state in order to halt progressive bills in Salem. And the rural secession of Greater Idaho and the state of Jefferson roughly follow the politics of Donald Trump, who has been a motivator for some supporters in both cases.

The impulse to separate and redefine the region is as old as the Euro-American settlement of the Northwest, and has roots in so-called “rural values” and racial exclusion that date back to before, during and after the Civil War.

What is now Idaho was once part of the Washington Territory, along with some of northwestern Montana and a slice of Wyoming. This was a vast region to run from Olympia, or what some in the eastern regions amusedly called “Clam country.” Clams versus bunch grass, or wet versus dry, is shorthand for a regional Cascades divide that persists to this day.

The dynamics of the Civil War triggered territorial changes. Anti-war Democrats and draft dodgers, many from Southern and border states, poured into the eastern part of the territory in 1862, lured by gold and silver strikes. The balance of power between the pro-Union Republicans of “Clam country” and the influx of Democrats threatened to shift the territory’s regional power to one potentially sympathetic to the Confederacy.

Historian Keith A. Murray has noted that by 1864 the Boise Basin, where much of the gold was being mined, had seen an influx of some 16,000 boomers, mostly Democrats. “Most of them were also violently opposed to the war,” he wrote in the Pacific Northwest Quarterly, documenting Washington’s early statehood movement. The creation of the Idaho Territory in March of 1863 helped bring that part of the region under the control of the government and preserved the largely pro-Union leadership of Washington.

In 1865, an editorial in the Walla Walla Statesman outlined the political problem for Eastern Washington. “We have been cut up in such a manner that the power is on the Sound…. Our franchises for roads, ferries, etc. are not at our own disposal, but the people of the Clam country give them to whom they wish.”

Parts of Idaho were carved off, some going to Montana and the Dakota Territory, later Wyoming. But the Idaho we know today emerged largely undivided, keeping its panhandle, despite all the chessboard concepts for moving around pieces of the Northwest.

Much as today, the impetus for these ideas was a desire for increased political control: rural versus urban, east versus west, Republican versus Democrat (with the roles reversed from today). Interestingly, the regions contemplated for Greater Idaho and the state of Jefferson comprise areas — southern Oregon and parts of northern California — that were among the most pro-Confederate regions in the Northwest during the Civil War. Douglas, Jackson and Josephine counties have been called “Little Dixie” by southern Oregon historian Jeff Lalande.

In the pre-Civil War period, Democratic politicians in Oregon and California had considered becoming slave states, which they ultimately rejected. Oregon settlers favored racial exclusion and committed hostile acts against Native American, Asian and Black communities; some had even considered taking the whole West Coast out of the Union to create an independent “Pacific Republic” or “Pacific Confederacy” that could benefit the South. (The topic of the West Coast as a possible “nation state” has also been revived by a power struggle between Trump and Pacific Coast states over how to reopen after coronavirus restrictions.)

One concept considered called for the secession of the entire region west of the Rocky Mountains — a range considered a natural, even providential, barrier —with some western states adopting slavery and others not. The idea was discussed in Oregon as early as 1851, as largely a Democrat-driven concept. This was years after Oregon had passed its so-called Lash Law in 1844 to drive Blacks from the state with whippings. It was also half a decade before Oregon citizens voted racial exclusion into their new state’s constitution in 1857. (Oregon was the only state to enter the Union with such a constitutional clause.)

The drive for division led by rural areas was to increase economic and political power, but practical matters often held sway over ideology. For example, the expected arrival of the transcontinental railroad to Puget Sound persuaded some proponents of secession from Washington Territory to reconsider. A land link to a seaport had major advantages, such as trans-Cascades commerce.

But map-redrawing proposals have often come with a conscious or unconscious acceptance of rural settlement patterns and “values,” which have baked into them white supremacist and white separatist ideas. At its most extreme are the frequently expressed desires to turn the Northwest into an all-white “homeland.” These ideas have been espoused by far right and neo-Nazi groups, including Richard Butler’s old Aryan Nation in Idaho or the Northwest Front’s late Harold Covington of Bremerton, who inspired Charleston, South Carolina, church shooter Dylann Roof with his hopes for an all-white “homeland.” More recently, echoes of this disconcerting past resound in the ideological activism of Washington state Rep. Matt Shea of Spokane Valley, who has sought to see his part of the Northwest as a “last redoubt” of conservative Christian values — a cause for which he has imagined the Biblical justifications for all-out war.

In the 1980s, Robert E. Miles, an old Christian identity movement white supremacist, expressed his desire for a “New White Republic” in the Northwest. It would have “all we want,” he said. “[The] space is not jammed already with hostiles, indifferents or aliens.” The lack of such diversity in large swaths of the region was by intention, not accident, meaning that the frontier period of racial exclusion and subsequent efforts to limit immigration, moves to eject and restrict ethnic groups like the Japanese and Chinese, the use of redlining and housing covenants to segregate and the rise of the Ku Klux Klan in various periods helped create a Northwest landscape on which exclusionist and separatist fantasies continue to play. We who live here are inheritors of this ugly legacy.

There are legitimate reasons to consider changing political boundaries. They are, after all, human constructs and often reflect decisions made in problematic times, whether it was during the expansion of empire, displacement or murder of Indigenous peoples, fights over the right to extract the most resources, desire for more autonomy or eruptions of nationalism.

It is ironic that some who are the political inheritors of this past would host a “Liberty Rebellion” against coronavirus precautions. Apparently suppressing a nasty contagion is an exclusion too far!