Compared with the first week of March, applications are now 170% higher for cash assistance, double for food stamps and 60% higher for housing assistance. 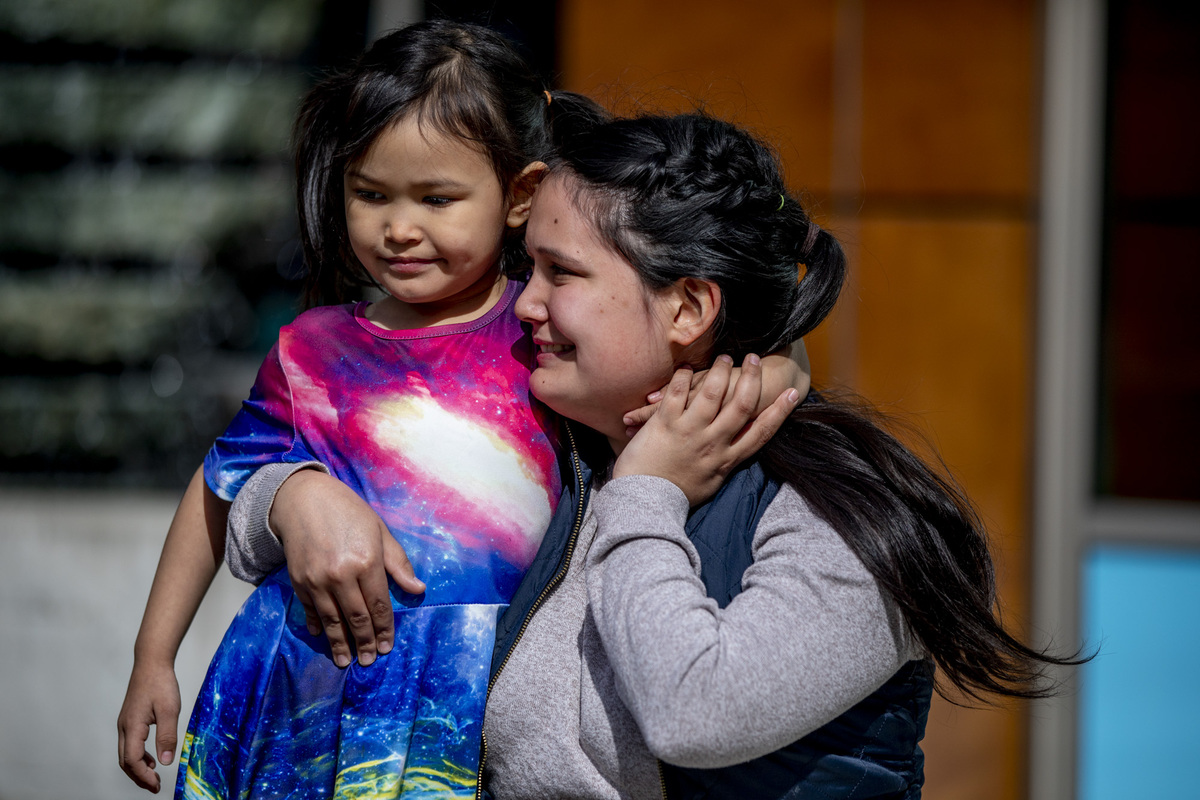 Kaylee Tessan Joseph and her daughter, Alaina, 4, outside of their Bellevue apartment on April 6, 2020. Joseph was laid off from Applebee’s because of COVID-19. She applied for unemployment and the Supplemental Nutrition Assistance Program (SNAP) to help while she is out of work. SNAP applications have gone up 105% in recent weeks. Along with unemployment applications going up as people are losing work, three safety net benefits (TANF, SNAP and HEN) have seen big jumps in applications as many families already on the margins prepare for a longer-term struggle. (Dorothy Edwards/Crosscut)

When Kaylee Tessan Joseph started losing hours at her job last month, she knew she needed a backup plan.

Joseph's full-time position as an Applebee's server in Bellevue became part-time when customers stopped showing up and then evaporated completely after Gov. Jay Inslee closed bars and restaurants to contain the coronavirus' spread.

She had been hopping from paycheck to paycheck and suddenly she saw herself jumping without anywhere to land.

"Even having a job, I was barely scraping by," said Joseph, who lives with her boyfriend and has a 4-year-old daughter. "Things were working out, but going from barely getting by to where you had no idea what was going to happen — all that uncertainty built up a lot of emotion and frightened me."

But fear wasn't food for her daughter, so she did what thousands of other Washingtonians have done in recent weeks and applied for food stamps, in addition to unemployment. As a mother, she's also considering seeking family-based cash assistance.

In the economic carnage that is following the global coronavirus pandemic, millions of people in the United States are now looking to the government for help. Record-breaking levels of unemployment have told part of the story. But in recent weeks, Washington state has also seen a dramatic surge in people seeking refuge in the state's broader social safety net — namely for food, housing and basic income.

The number of applications for cash assistance through Washington's Temporary Assistance for Needy Families (TANF) program — what most know as welfare — was 170% higher last week than during the first week of March. Applications from Washington residents for food stamps doubled and requests for state housing assistance jumped about 60%.

When compared with the same weeks in March 2018 and 2019, the story is the same, with the average number of applications per day now hovering around double or, when it comes to TANF, nearly triple what one might normally expect for this time of year.

The increases don't pace with the nearly 1,000% spikes in unemployment applications, but they may reflect a deeper hurt for the state's most vulnerable populations, said Babs Roberts, director of the Community Services Division of DSHS. It shows that the years of labor many have put into escaping from poverty are being erased.

"What we’re going to see — and have seen immediately — is those folks who were living on the margins coming back in," she said. "Folks that are climbing out of poverty are going to be the first and hardest hit because they have very little fallback."

Joseph, 25, called herself "lucky" because at least she knew where she could turn. Growing up, her parents often used food stamps for groceries and, as a young mother herself, she had briefly received government cash assistance. Although she hasn't needed the help for years, it’s a world Joseph has known before and to which she knew she could return.

"My parents always taught me amidst all this stuff there's always some type of help out there," she said.

Before the recent surge in applications for economic help, Washington state's safety net was still being repaired from the last economic crisis. In an effort to save money after the 2008 housing crash, legislators made it harder to access and remain on cash welfare, kicking thousands of previously eligible families off the program and freeing up millions of dollars for the state to repurpose elsewhere in its budget.

Unlike other states, Washington largely allowed its cuts to remain in place even as the state went through an economic boom. In 2006, 62 out of 100 Washington families in poverty received cash assistance, according to the left-leaning Center on Budget and Policy Priorities; last year, that number was just 29 out of 100.

For state Sen. Joe Nguyen, D-West Seattle, Washington state's 2020 legislative session was an opportunity to restore the state's welfare program to what it was before 2011, when the bulk of the cuts were made. Nguyen, along with Reps. Debra Entenman, D-Kent, and Tana Senn, D-Mercer Island, ushered through a pair of bills that made it easier for families to access and continue to receive cash assistance from the state. Gov. Jay Inslee signed both measures last week, even as he vetoed other new laws in order to save money for the COVID-19 response.

Read more: Cash assistance for families has plummeted in WA, even as poverty remains high

Based on previous caseloads, the expanded access was likely to cost the state an additional $18 million a year. But with the jump in applications — and need — that number is certain to be higher, said Nguyen, whose own family relied on cash assistance when he was growing up.

"Even when the economy was fine, it wasn’t enough," he said of his legislative victories. "Now it’s definitely not enough."

Legislators also voted this year to expand the state's housing assistance for disabled adults, the Housing and Essential Needs program, by $15 million. But that program recently has also seen applications increase by 60% to 70% over what's normal for this time of year.

"The stuff that we’re dealing with is now normal, because average people who are barely on the margin, who didn’t think they’d be impacted, are now being impacted," said Nguyen.

Kaylee Joseph doesn't receive what she used to make at her Applebee's job. But the government benefits will at least provide her some relief.

"To me it's an emergency fund," she said. "Even though it isn't the amount that I hoped for it to be and doesn't really add up to what I used to make, it still provides a sense of security that I'm still able to provide food for my family."

There are even a couple thin silver linings. She's cooking more, for one, trying out new recipes for enchiladas and spaghetti.

But the future is uncertain. Joseph thinks she and her family can squeeze by through May. The $1,200 check from the federal government might stretch that through June, she said. "I'm hoping by then things are up and running," she said.

Local and federal governments have made some changes to safety net programs in response to COVID-19. Food stamp benefits through the national Supplemental Nutrition Assistance Program have been increased. For TANF, work requirements have been rolled back and time limits halted, said Norah West of DSHS's Office of Communications.

But while SNAP benefits are more easily scaled up in a crisis, direct cash assistance is less wieldy, said Roberts of DSHS's Community Services Division. States receive welfare money as a block grant from the feds, and the recent stimulus packages out of Congress did not increase those.

At the same time, states are required to match federal welfare dollars with spending out of their own budget. But since 2011, Washington has spent a vanishingly small proportion of its matching dollars on direct cash assistance, instead investing heavily in early education and workers' medical compensation and justifying it as counting toward TANF. Welfare advocates have made reversing that trend a priority for years.

"The money that they’ve swept out of meeting basic needs hopefully can be brought to bear to meet the increase of caseload needs," said Liz Schott, senior fellow at the Center on Budget and Policy Priorities.

But to do that at a large scale would require another legislative session. On Tuesday, Gov. Inslee said he would "probably" call one. Nguyen said he suspects that may happen this fall, not just for TANF, but to address a wide range of possible budget concerns. "I would not be surprised if there was a special session," he said.

Meanwhile, those who have long championed safety net programs view the current moment as validation of their causes' importance.

Marcy Bowers, executive director of the Statewide Poverty Action Network, said the current race to expand benefit programs shows why they're necessary in the first place. "I'm horrified that it takes a global crisis to say, 'Hmm maybe we shouldn’t make [benefits] so hard for people to access,' " she said.

Christina Wong, public policy and advocacy director of Northwest Harvest, echoed the point about SNAP benefits. "After all the attacks on SNAP, this is showing exactly how SNAP works and what it’s intended to do," she said.

Is the state ready?

In a way, the recent recession prepared Washington for the COVID-19 crisis.

Although there was little warning the economic effects of the disease would come so fast and be so devastating, some of the bureaucratic systems were streamlined from the years after the housing collapse, said DSHS's Roberts. "Because that recession hit so hard and lasted for so long, it made us efficient," she said.

To get through to DSHS for her food stamp application, Joseph said she had to wait two hours on the phone, which she said she could manage in order to get what she needed. In all, she said the process was not overly complicated.

Roberts said her agency has moved employees from other sections at DSHS to help process the calls. And with lowered requirements for the programs, some of the administrative lifts have been removed.

At the same time, advocates are hoping legislators take other lessons from the last recession around what programs to cut or not. "In the last recession, I feel like we made a lot of short-term, shortsighted decisions that were amazingly effective at getting money in the short term but had these long-term, expensive consequences," said Bowers of the Statewide Poverty Action Network.

So far, Inslee has left safety net programs intact, instead cutting from schools and elsewhere.

Meanwhile, for those like Joseph who talk about "when" things return to the way they were — "when" the restaurant reopens, "when" the economy gets moving again — there's often a waver in their voice that suggests what they really mean is "if."

"It's a lot of uncertainty with what everybody's dealing with these days," she said.

Joseph is doing her best to choke back her fear. But it can be hard. Families like hers are planning for their climb back out of this hole, even as they continue to fall toward its bottom.

Nguyen is blunt in his assessment: "You’re going to see the ramifications of this for generations," he said.