Government officials are worried about "trading one public health crisis for another," as food supplies quickly disappear due to high demand. 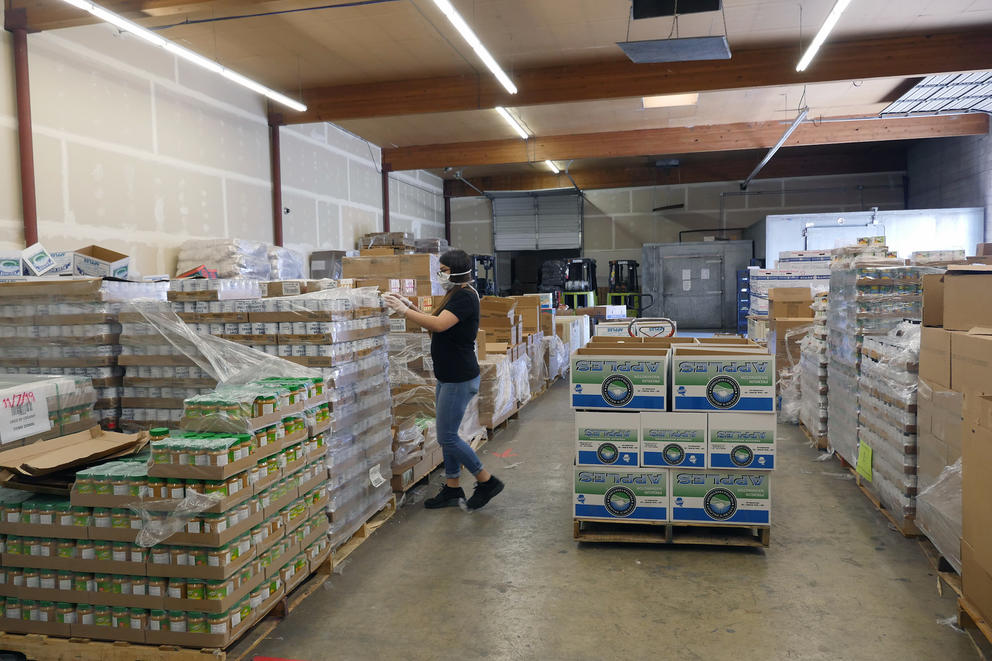 A staffer in the OIC food bank distribution center in Yakima works to fill boxes on April 6. OIC has food banks throughout the Yakima Valley, and while they're stocked for now, it's because they're using food borrowed from May and June's supplies. (Emily McCarty/Crosscut)

Washington officials and the people who run food banks across the state say a major food insecurity crisis may be only a few weeks away.

In addition to a tremendous increase in demand, food banks are starting to borrow federal food reserves that had been set aside for May and June. Because of increased demand in grocery stores, food banks' purchasing power has also diminished.

Food banks across the state are reporting a “critical shortage of food,” with expectations of a "significant gap in the food supply across the whole system by mid-April...,” according to a situation report from the state Emergency Operations Center dated March 27. “The burn rate and demand are rising sharply.”

Jordan Rubin, communications director of Northwest Harvest, put it simply: Washington can expect to see empty food bank shelves in two weeks unless there is a sudden change in the food distribution system.

Gov. Jay Inslee is very concerned about continuing the flow of food, according to JT Austin, senior policy adviser and member of the governor’s COVID-19 food security and hunger relief team.

“What we’re concerned about is trading one public health crisis for another,” Austin said. “The need is hard to wrap my head around. The numbers are so big — the amounts of money, the pounds of food per week to get us through this crisis in the coming weeks.”

Feeding America, the largest hunger relief organization in the U.S., said that food banks nationally are seeing a 40% increase in clients, a significant decrease in deliveries because of the uptick in grocery store usage and a drop in volunteers.

Jamie Collins Veliz, a 54-year-old grandmother of four in Yakima, depends on food banks and free school meals to feed her family.

When the Yakima School District ran out of school meals on March 27, she was afraid. Because the district has changed from daily distribution to weekly, she had to scramble to feed her family for the next seven days.

The school district referred her to local food banks, but of the few food pantries open on Fridays, most had closed by noon. She would have to wait until next Monday at least before she could refill her pantry.

Before schools closed across the state, Collins Veliz used food banks about three times a month to feed her grandkids, who range in age from 3 to 14. She would go to the St. Vincent de Paul or Salvation Army food banks; others were too far away and would eat into her limited gas budget. Now, she's planning on regular visits.

Collins Veliz may have luck this month, because some of Yakima Valley’s food banks are among the distribution sites using the shipments of food borrowed from May and June.

On April 3, the state awarded the Department of Agriculture $10 million to purchase food and distribution supplies for food banks and other hunger relief organizations, and Northwest Harvest’s Rubin hopes it comes as soon as possible.

“We’re already planning on spending it,” he said. But because of high demand at grocery stores, there isn’t as much going into the emergency food system, he said. That means the food bank's purchasing power has greatly decreased, which only adds to the coming disaster.

Food banks bid up against other retailers, Rubin said, but can buy at discounted rates. Now, those costs are rising.

“We were getting before, let’s say 25 cents on the dollar, in our purchase strength. [Now] that might be closer to retail, of like a dollar on the dollar,” Rubins said.

Already, there are small signs of what’s to come: Food banks on the west side of the state are struggling with a lack of volunteers and donations. The Cove, a small food bank in Twisp in Okanogan County, is worrying about its increase in clients. Food banks in Spokane saw a doubling in the number of people asking for help. Tribal food pantries are facing closures because of a lack of food.

On April 7, Inslee announced the creation of the "WA Food Fund", a statewide collaboration with local nonprofits and philanthropic organizations to raise money for hunger relief, which will be donated to three food distribution organizations: Food Lifeline, Northwest Harvest, and Second Harvest.

The current number of Washingtonians in need of food assistance is 1.6 million, double last year’s numbers, according to an estimate from Katie Rains, a policy adviser at the state Department of Agriculture.

With 77,000 newly unemployed people from January through March and an additional 419,000 at immediate risk, that number is expected to rise even higher.

While food supply is a serious problem, so is being able to staff the distribution sites. Volunteers, many of whom are retirees and seniors at high risk of contracting coronavirus, are staying at home, either by food bank mandate or of their own volition.

Wondering how you can make a difference? Here's a compilation of ways to help during the COVID-19 crisis.

The OIC Food Bank and Distribution Center in Yakima, which distributes to 12 Yakima Valley food banks, is normally run by volunteers and assisted by only two staff members.  Now, it's requiring all volunteers to stay home and are pulling in staff from other programs to rotate through shifts at the food bank, said food bank director Haydee Barbosa.

OIC is also receiving early food shipments previously reserved for May and June. Last week, Barbosa said the food bank saw about 100 more people than usual in a day.

“I see some of the food banks, if they don’t get the supplies soon … they may have to close,” Barbosa said. “We [put in] a request but we haven’t gotten it yet.”

On March 31, in response to the fluctuation in staffing, Inslee announced he would deploy the National Guard to help food banks. About 130 guardsmen will deploy to five counties — King, Pierce, Chelan, Franklin, and Walla Walla — to help unload, pack and distribute food.

Their length of stay is undetermined, said Karina Shagren, Washington state Military Department’s communications director, but they will help fill in the gap resulting from the decrease in volunteers.

Still, even with proper staffing and protective equipment, the real concern remains the same: food supply.

Families like Collins Veliz’s would be one of many affected by a food drought. As with many families facing food insecurity, Collins Veliz depends on school meals and food banks to help keep her cupboards full.

With $650 in monthly Social Security and $749 in food stamps, she has to be careful with her budgeting. Her 30-year-old son, also on Social Security, helps with rent and the electric bill, but it’s up to her to come up with the rest. She used to buy items at yard sales and thrift stores and resell them on an auction-style Facebook group. With both those options gone amid the COVID-19 closures, she’s out a few hundred dollars a month.

The outbreak has also affected the grocery supply chain, which has had an immediate impact on Collins Veliz.

“Because of people hoarding and buying all the food, I’ve had to buy more expensive food,” Collins Veliz said. “I don't want to have to budget: if [the grandkids] are hungry. I want them to eat.”

For now, Collins Veliz is depending on her food reserves. Breakfast is cereal or frozen pancakes — freshly made pancakes on special days. Lunch is ramen noodles, sometimes macaroni and cheese. For dinner, it's canned ravioli or SpaghettiOs. She found some frozen pork chops in the back of her freezer that she’ll thaw and cook.

Her truck broke down, stopping her latest attempt to visit a food bank. With her large family, the food often lasts only a few days, Collins Veliz said. She’ll try again next week.

This story has been updated to reflect the announcement of Gov. Inslee's WA Food Fund on April 7.

How are you planning birthdays, graduations, funerals and other important events during coronavirus? 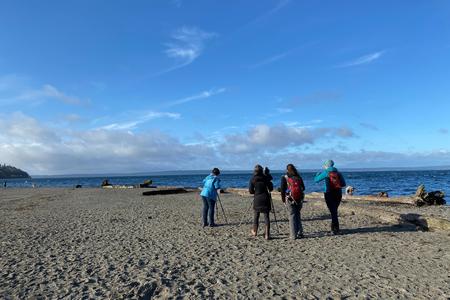 You could be the citizen scientist the world needs right now

From bird counts to COVID-19 testing, you can help researchers collect critical data from home.