Risking bodies to pray for souls, priests answer the call amid coronavirus

Puget Sound's religious leaders are adapting services and sacraments, as they tend to grieving families and COVID-19 patients. 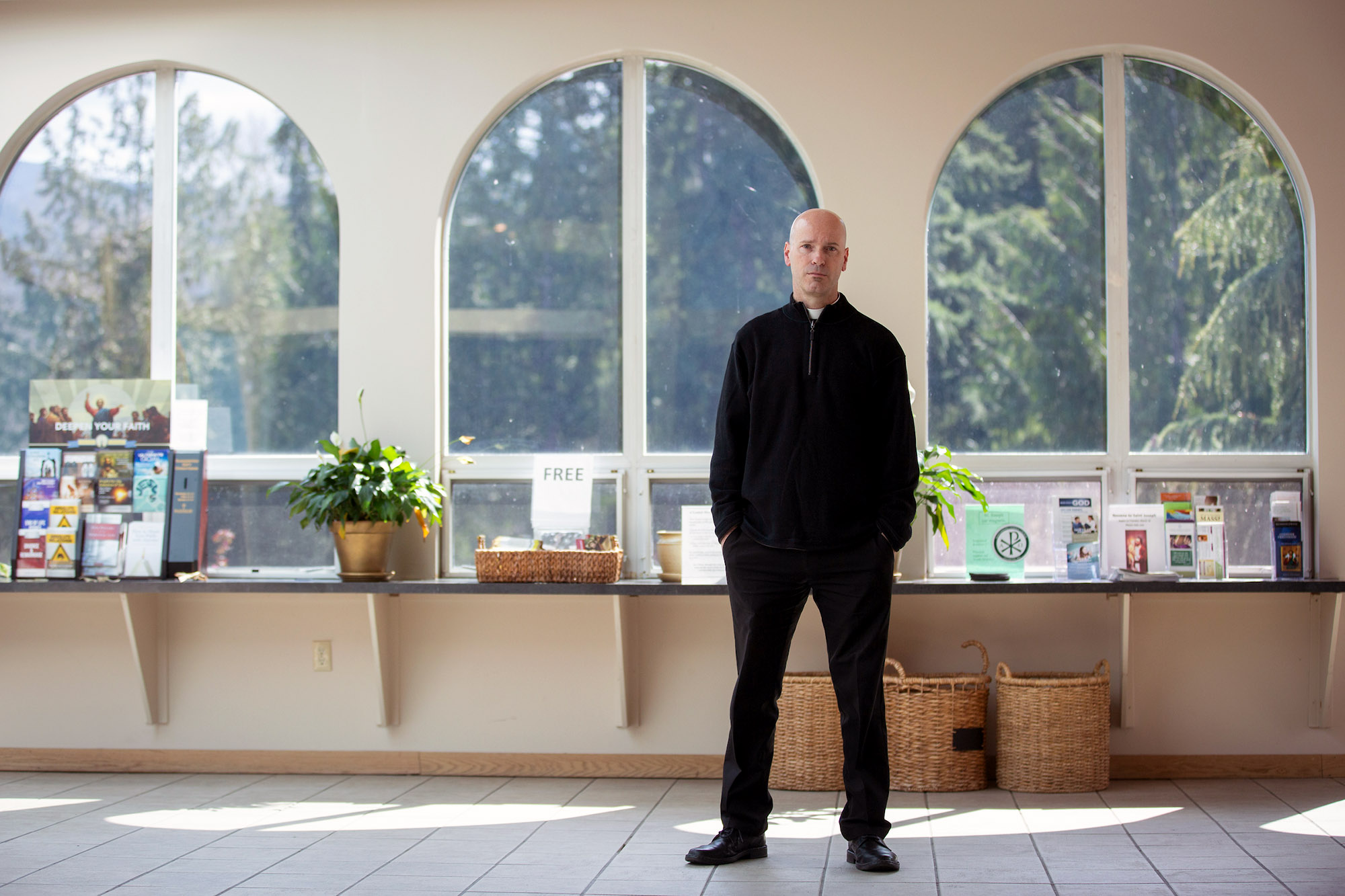 Father Todd Strange stands in St. Joseph Catholic Church in Issaquah, April 6, 2020. Strange quarantined himself for two weeks after he ministered to COVID-19 patients in a nursing home. (Jen Dev/Crosscut)

By the time Father Todd Strange walked into the Issaquah nursing home, it was already too late.

Strange, a priest in the Archdiocese of Seattle, put on the gown, gloves and face mask meant to protect him from COVID-19. He greeted one of the twin sisters who shared a room at the nursing home. She had tested positive for the virus and was lucky to still be alive. Strange had rushed to the home to perform last rites on her, but it was the other sister, the one only presumed to be positive, who had passed away about 15 minutes before Strange walked through the door.

“I went in to bless the body of the deceased sister,” said Strange, 53, a priest at St. Joseph Catholic Church in Issaquah.

Strange reached for the small zip-lock bag filled with oil. He then dipped a Q-tip in the oil, stroked her forehead and the palm of her hands and, holding the other sister’s hand, began reciting the Lord’s Prayer: “Our Father, who art in heaven. ...”

“The sister who survived stood beside the bed with me to pray over her sister's body,” Strange said.

“Knowing that it was a COVID patient, I had a certain amount of unease, but I also felt I had a responsibility to do it,” Strange said as he described that recent Monday afternoon.

Strange had visited the nursing home many times before, but there was a palpable difference among the staff this time, he said.

“I could feel a kind of fatigue and, maybe, fear and tension,” he said.

More COVID-19 news: Coronavirus compounds fears for an ICE detainee and her family

As the coronavirus has spread, Strange and other religious leaders around Washington state have found themselves on the front lines of the pandemic. Christian, Jewish and Muslim leaders are grappling with navigating mandates for social distancing and still honoring some of the year’s biggest religious holidays — Easter, Passover and Ramadan.

Last month, the Archdiocese of Seattle announced it had acquired a handful of personal protection equipment kits for priests who hope to administer the sacrament of the anointing of the sick to COVID-19 patients. Priests considered at higher risk of dying from the virus, or those over the age of 60, are not allowed to volunteer to perform the sacrament.

In addition to canceling all large gatherings, including most masses, the Catholic Church has had to adapt in other ways, big and small, to the pandemic.

The National Association of Catholic Chaplains and the Catholic Health Association have made clear, for example, that the anointing of the sick, which typically involves a priest’s physical touch, can be performed using certain instruments, such as a Q-tip. Other priests have started to offer curbside or drive-thru confessions, in which they listen to their parishioners from a chair strategically placed 6 feet from a vehicle.

Even with safety precautions in place, like so many others, priests have succumbed to the virus. Earlier this month, Jorge Ortiz-Garay, a priest in Brooklyn, was the first U.S. priest known to have died from the virus. In Eastern Washington, at least two priests have tested positive for the virus, although it is not clear when and where they acquired it.

The Rev. Bryan Hersey, a priest at St. Patrick and Christ Our Hope in Seattle, is the go-to person for Catholic families at the hospitals on Seattle’s First Hill — Swedish, Harborview and Virginia Mason.

Like Strange, Hersey dons personal protection equipment. He said Catholic patients are looking to him as someone to talk to, but also so that they can receive one of the sacraments — anointing of the sick and confession — as a “visible sign of God's presence.” The Eucharist, which Christians believe is the body and blood of Christ and commemorates the Last Supper, is no longer allowed in most facilities for fear of contamination. Instead, spiritual communion, a way to access the grace of the sacrament without physically receiving it, is encouraged.

Hersey said the hospitals have varying rules about what rooms he is allowed to enter. Swedish Medical Center has temporarily suspended all visitation because of COVID-19, Hersey said. Sometimes priests are unable to administer a sacrament because there is a glass barrier between them and the patient.

In such circumstances, priests have been instructed by the National Association of Catholic Chaplains and the Catholic Health Association to extend their “hands toward the infected person if the person can see you, pray with/for them the Lord’s Prayer and include a message, such as, ‘Be assured by the words of our Holy Father Pope Francis that if your intentions are to receive the sacraments and you have called on the name of the Lord, you will receive God's full pardon and forgiveness.”

“I think everybody is just taken by surprise by this whole thing ... even though we've been warned, and it's been on the news for several months now,” Hersey said. “Just last fall, everything was fine. Now everything's just absolutely unsettled.”

Hersey said sometimes it’s obvious a patient is in quarantine because of COVID-19, but that many times he doesn’t know why someone is sick or dying. Patients’ health conditions can also be complicated. An individual might have tested positive for the virus, but had already had a serious underlying condition, such as cancer.

“They're not only not feeling good, but they're kind of weary of, you know, all the bad news,” Hersey said, referring to the patients he sees now. Like some of them, Hersey, 49, is a cancer survivor.

Despite the obstacles, Hersey said he’s been inspired by the nurses and doctors he interacts with during his ministry who treat him “as a team player trying to help these patients.”

“You know, it'd be very easy for them at a time like this just to really focus on the medical procedures and not get distracted by anything else,” Hersey said. 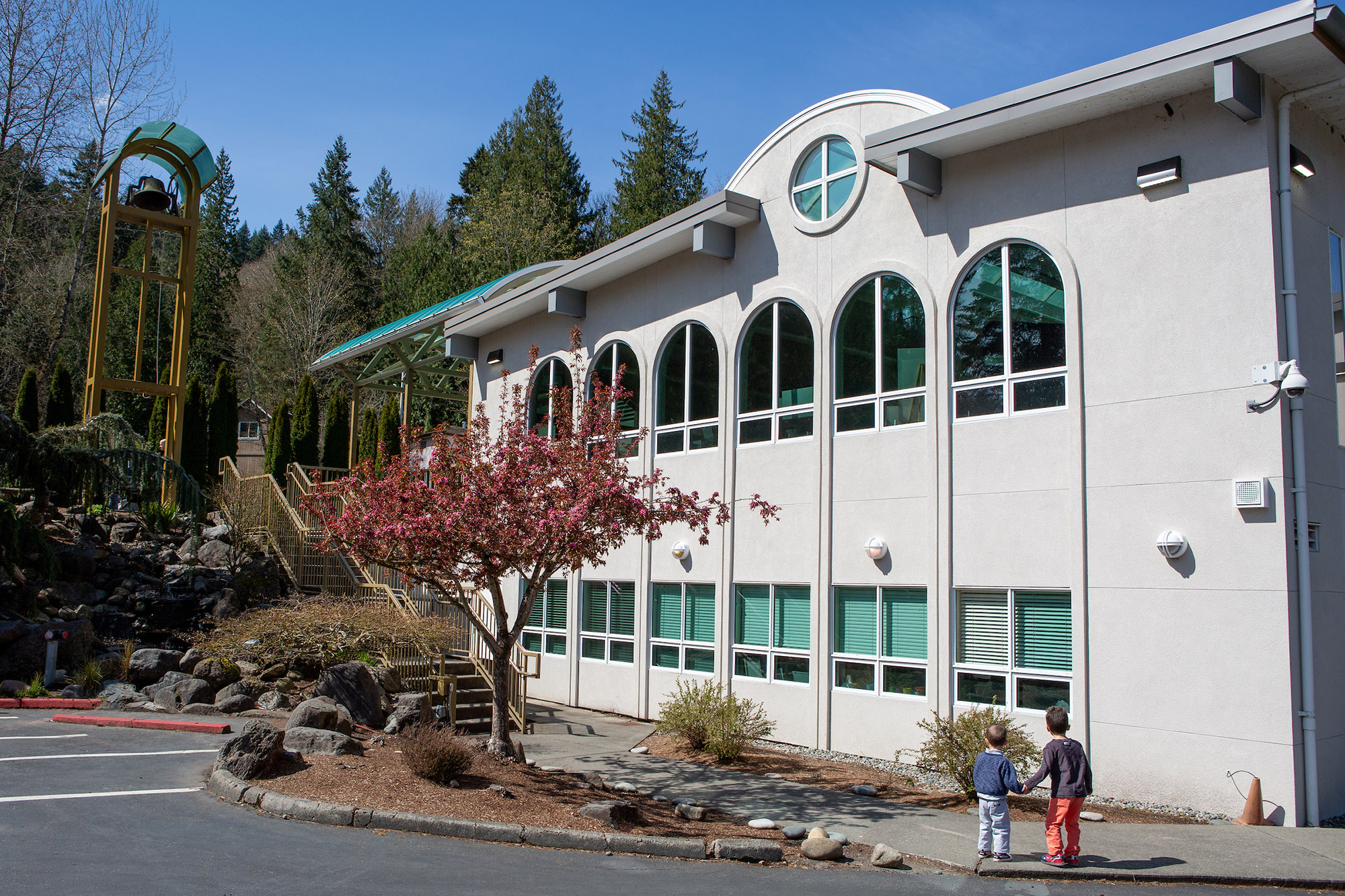 The exterior of St. Joseph Catholic Church in Issaquah on April 6, 2020. In response to COVID-19, the church has begun offering services online through Facebook Live. (Jen Dev/Crosscut)

The exterior of St. Joseph Catholic Church in Issaquah on April 6, 2020. In response to COVID-19, the church has begun offering services online through Facebook Live. (Jen Dev/Crosscut)

Strange, for his part, spent 14 days after his visit to the nursing home in self-quarantine, monitoring symptoms, taking his own temperature and walking the church grounds where he lives.

Remaining faithful but doing so in a way that is “prudent in terms of limiting the spread of the coronavirus” is a constant balancing act, he said

Speaking about ministering specifically to COVID-19 patients, Strange said, “Would I go again? Yeah, absolutely. I would just be as careful as I can be.”

“The needs, the more time goes on, are going to become greater,” he said.