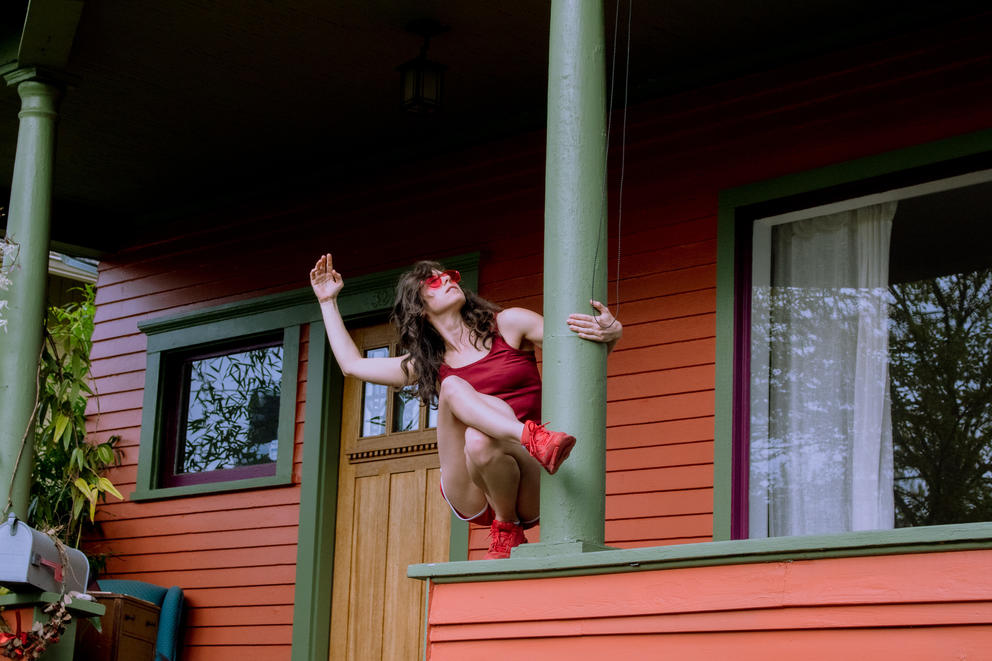 ‘Cooped-Up’ is a contemporary dance performance viewed entirely from behind car windows. The makers describe the show as a mash-up of a drive-in movie, scavenger hunt, escape room and performance tailored to COVID-19 restrictions. (Devin Muñoz)

Gedney Barclay sat in her idling car in a North Seattle Safeway parking lot, awaiting instructions. She could feel herself getting anxious. The low evening sun had cast a golden glow over the few masked shoppers stocking up on weeks’ worth of groceries. She looked around — unsure of what would happen next — and glanced at the phone in her hand. The call from an unknown number would come anytime now. And then there would be no turning back.

Barclay wasn’t involved in some kind of nefarious plot. She was about to participate in Cooped-Up: Drive-in Dances for Cooped Up People, a contemporary dance performance by local company LanDforms, in which audience members view the proceedings through their own car windows.

“It’s quite an adventure,” says Barclay, a local writer and musician, “a little bit like a spy mission.”

Guided by pins on a digital map and a downloaded soundtrack — featuring songs,  poetry, a couple of old voicemail messages and mysterious clues — ticketed audience members drive through the city and visit performers at their homes. The dancers perform from porches, sun rooms, front yards, alleys and balconies while the audience, cocooned in 20 cars (one per household), drives up to watch at 10-minute intervals.

“It’s a wild journey all over Seattle,” says LanDforms’ Leah Crosby. She and co-director Danielle Doell describe the show as a whimsical mashup of a drive-in movie, scavenger hunt, escape room and “durational performance” tailored to and inspired by COVID-19 restrictions. Basically, they say, it’s like curbside pickup of food-to-go, but for dance.

The first, mid-April performance of Cooped-Up sold out almost instantly. The duo is orchestrating two more (sold-out) shows this Friday and Saturday. They plan to do more performances, even when the shelter-in-place order is eventually lifted, perhaps in a different form. (Under Gov. Inslee’s stay-at-home order, car travel should be limited to urgent or necessary trips.) 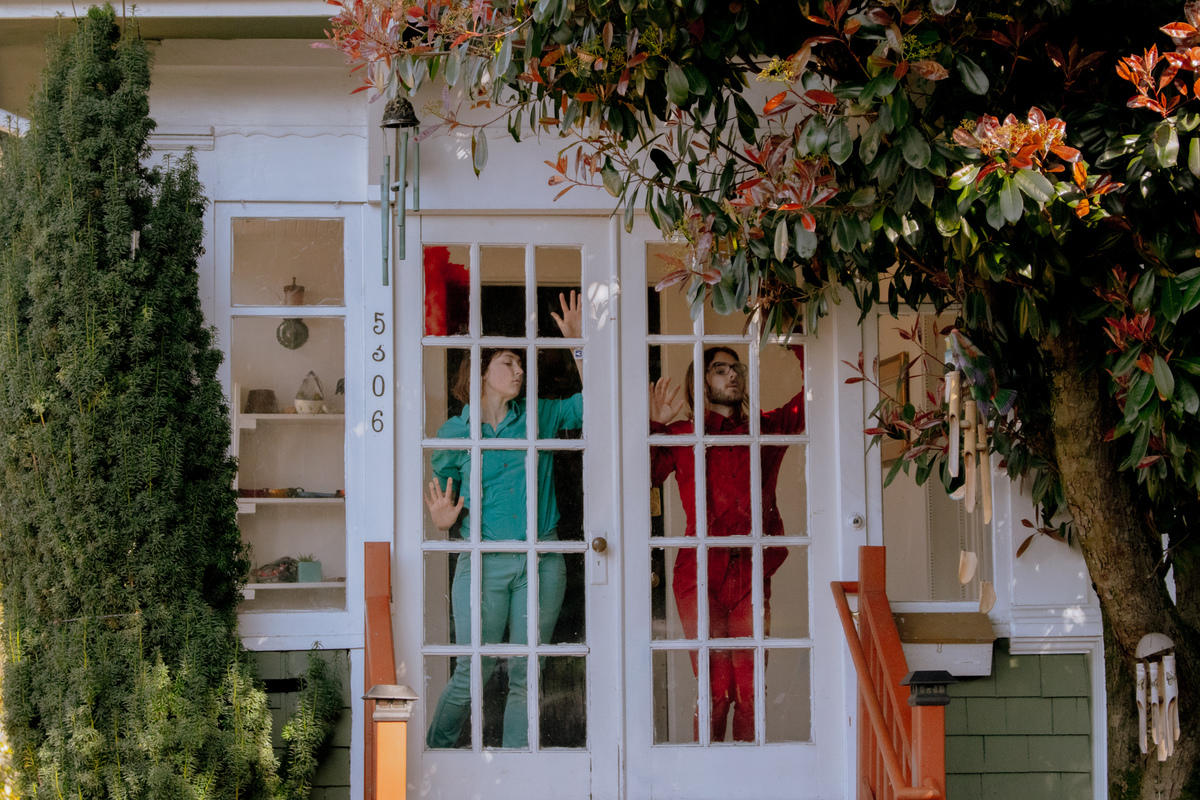 Crosby and Doell are among the many local artists finding front yard and window workarounds to the stay-at-home order and ban on gatherings.

Earlier in March, artist Rachel Kessler and On the Boards director Betsey Brock staged a citywide performance titled “Going the Social Distance,” for which they collected song requests (and home addresses) from participants, donned cheerful costumes and biked to people’s houses blasting the songs through Bluetooth speakers. Isolated fine art photographers are venturing out to photograph people from a safe distance either outdoors or behind windows. In late April, KEXP radio DJ John Richards started broadcasting live concerts from his front yard, featuring local musicians and chirping birds chiming in with a new kind of accompaniment.

While some of these artistic undertakings fall into the more escapist camp, Cooped-Up deals explicitly with our new corona-colored reality. In seven different dances created collaboratively over Zoom, the participating dancers bring their personal quarantine experiences (and corresponding cocktail of emotions) to the makeshift stage. However whimsical, the show doesn’t shy away from expressing the loneliness and the boredom specific to this cultural moment of "being alone together."

Coincidentally, those were the main themes of Cupped Up, a show Doell and Crosby conceived of and planned to perform long before quarantine. “It didn’t have anything to do with COVID-19 but it was so prophetic,” Crosby says. LanDforms was supposed to premiere the show at Artspace Hiawatha Lofts in May, but had to put it on hold when the coronavirus hit the state.

The choreographers didn’t want to wait until who knows when. On a Zoom call with production manager (and frequent collaborator) Ari Kaufman in late March, the duo wondered: “How can we make a live performance right now?” Doell says. “There’s an overwhelming amount of art available through social media, video and film, and that’s lovely. But as performing artists, we really wanted to figure out how we could continue the [art] in its original form.” 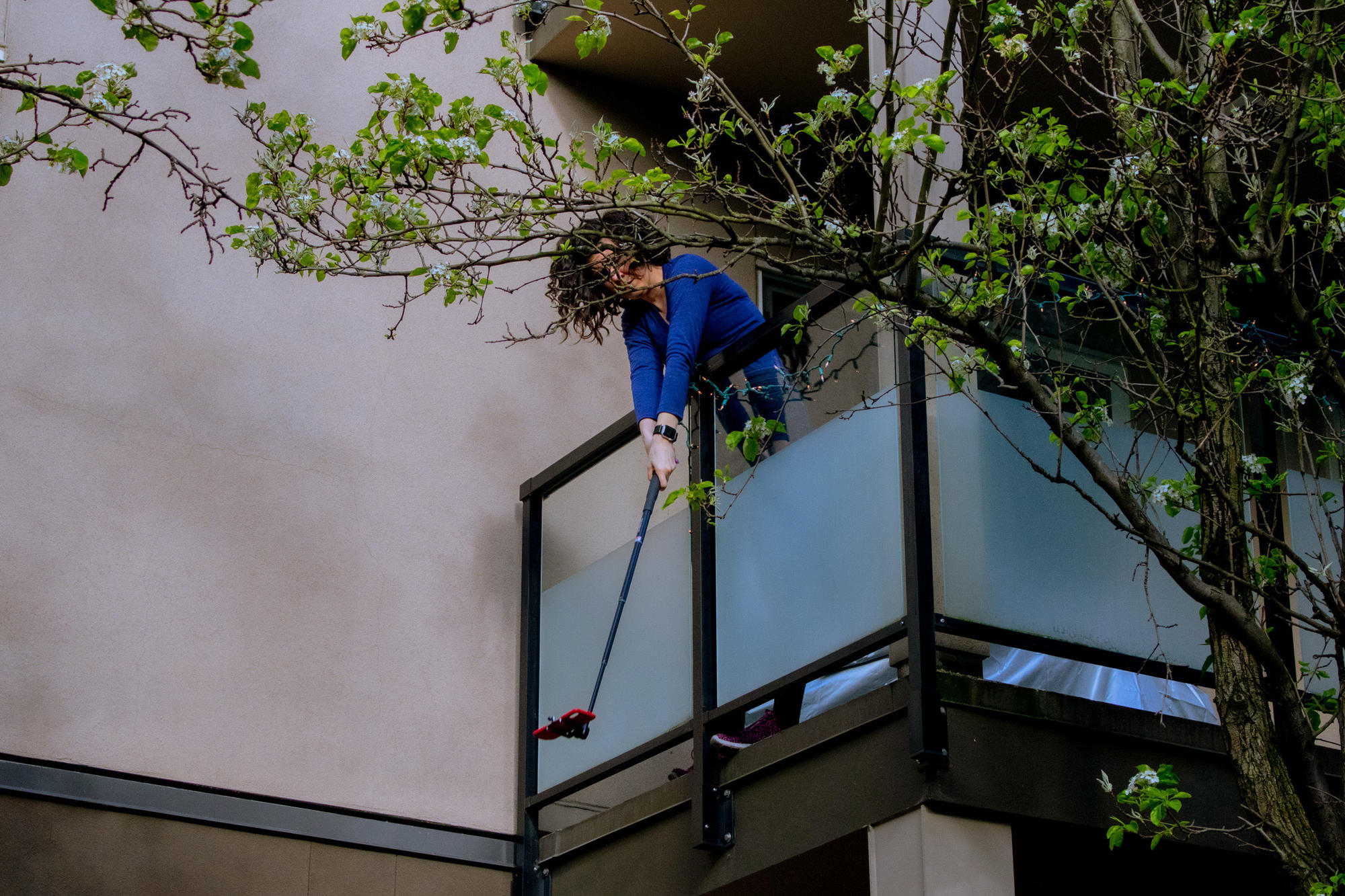 When Doell, who is also a youth educator, noticed that cooped-up kids in her neighborhood had been hunting for the stuffed animals neighbors placed in windows as a way to pass the time, she wondered, “Maybe we can make kind of a dance teddy bear hunt?”

LanDforms’ performances often sandwich sadness between humor and cinematic magic. They might explore the search for God and meaning; they just do it on roller skates. (The pair once based a whole performance, #Wisdom, off of the messages on Yogi Tea bags.) They like to call themselves makers of “daydreams.”

Cooped-Up is a daydream too, but one built on extreme organization and an intense Excel sheet. These are not improvised performances. Everything is timed to the minute, if not to the second: when the first audience member’s car leaves; when they should arrive at the next location; where every car should theoretically be at each point in the performance; when the next song is supposed to start; and when each dancer resumes their short loop of sometimes funny, sometimes melancholy movements.

Seattleites don't always like getting close. Newly unearthed evidence suggests the "Seattle Freeze" dates back to the 1920s.

“At any given time during the show, there are basically seven miniperformances happening simultaneously,” Crosby says. “That’s a lot to keep track of.”

During the five-hour run of the show, she sits in her room in West Seattle, headphones on, surveying multiple screens and spreadsheets like an air traffic controller. Meanwhile, pacing in his kitchen about a dozen miles away, production manager Kaufman has his phone at the ready, in case a car gets lost or runs into any trouble.

“It has been a bizarre experience for both me and Ari,” Crosby says. “It’s very unusual to be running a show through your phone, Facebook Messenger and computer, without having any direct immediate visual feedback of what’s going on.” 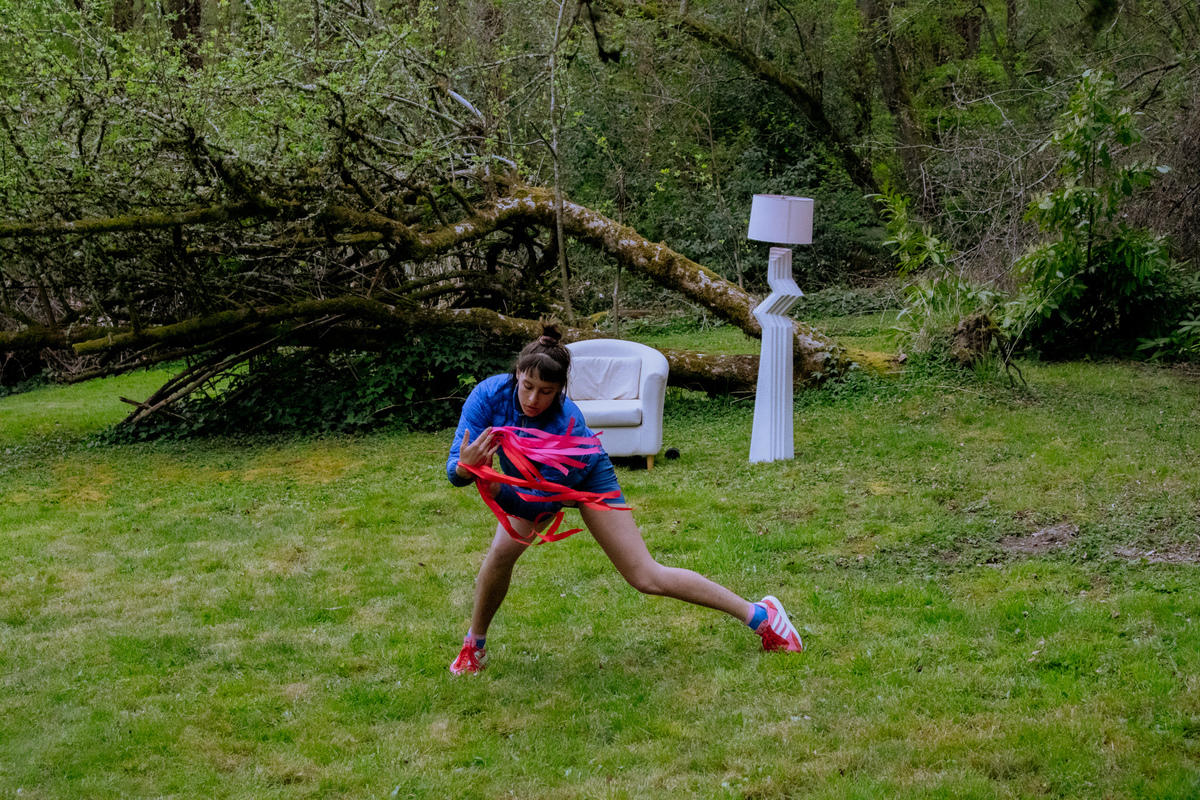 The dancers, including Doell, say it's odd for them, too. They miss the collective warmups and preshow rituals, the murmur as the audience trickles into the theater. When they’re done, there’s no applause. It’s a new shade of loneliness. But also one that has Doell reconnecting with her neighborhood, she says.

“A lot of neighbors were poking their heads out and being like: ‘Wow, what is happening?’” Doell recalls, as she danced in a blue dress on a public patch of grass. “Five different cats came up to me and sat down next to me.”

Things are different for the viewers, too, Crosby adds. “Normally, the audience member’s job is to pay money and then sit face-forward in a dark room where their identity is masked,” she says. “In this [performance], there’s so much more involvement.” They have to figure out where to go. Follow the clues. Find the dancer. Park by the gray garbage bin, not the green one — and don’t knock it over while backing up.

“As adults, we often need to be given permission to play, do things that are not ‘useful’ or ‘productive,’ Crosby says. “It’s the reason people play video games and card games. This is just a different, more physical game, existing in four dimensions.”

By the time Gedney Barclay completed the “game,” she had traveled miles away from the Safeway parking lot, to Doell’s house in South Seattle, the last stop on the dance adventure. The sky had turned dark, and her quarantine world had become multi-dimensional again.

She hadn’t ventured outside her neighborhood for a long time. Driving through the city was a poignant reminder of something she already knew: So many people, in house after apartment after studio, were going through the same isolation, the same loneliness. But for a few hours, from the relative safety of her car, Barclay felt like she’d made a connection — rekindled the kind of mutual appreciation between dancer and audience that electrifies live performance. “It made me feel way less alone,” she says. “We got to share something, together.”

What phase are we in? King County staying in Phase 3 — for now

Gov. Inslee isn't rolling King County or any other county back to Phase 2 of reopening, but he says he will reconsider that move in two weeks.

How mutual aid helped a Seattle neighborhood feed the community

It started early in the pandemic with hot meals, but the residents of South Park have since created a sustainable way to tackle food insecurity and support each other.