Businesses throughout Seattle, especially on Capitol Hill, often hinge their year on money made during Pride festivities in June. 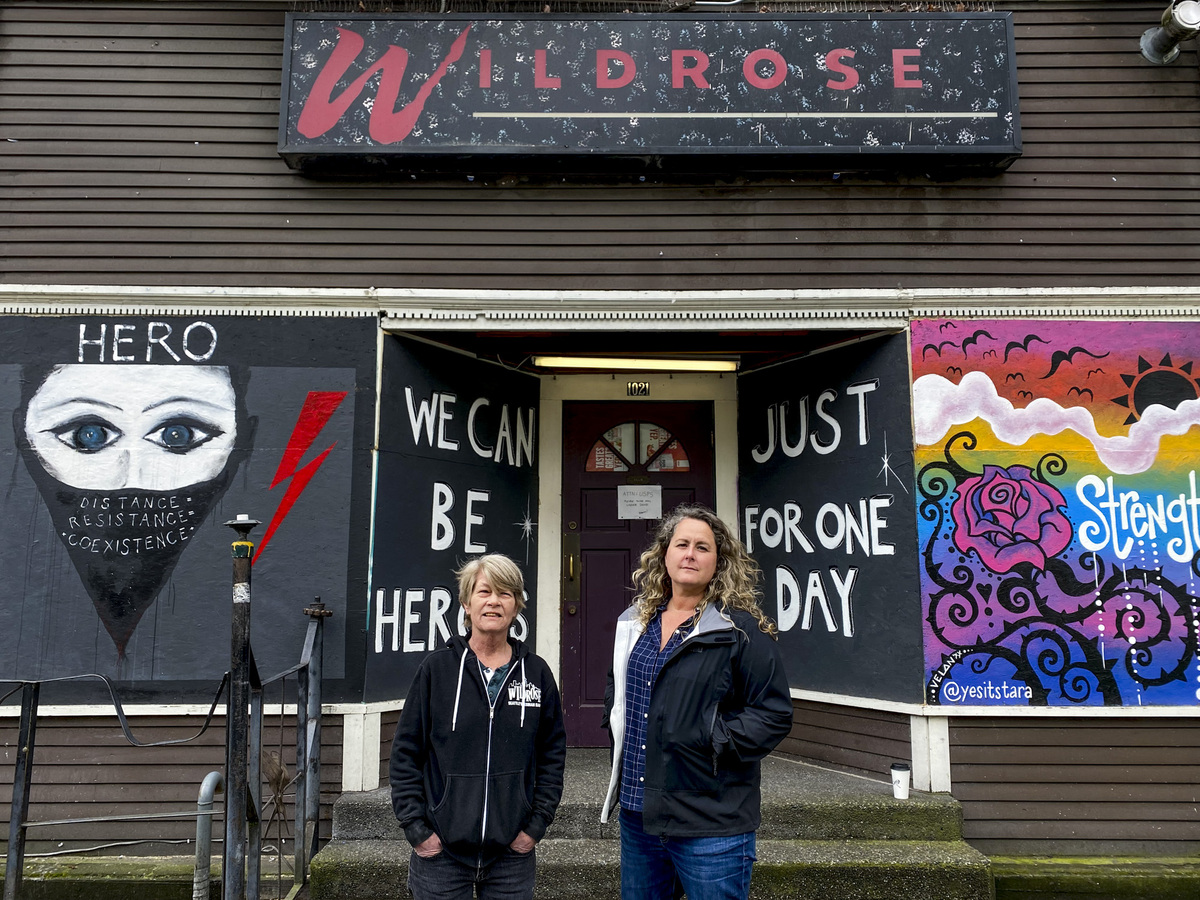 Wildrose owners Shelley Brothers, left, and Martha Manning in front of their closed Capitol Hill bar on April 23, 2020. The business partners closed down their gay bar, which they call “a place for women ... and all are welcome” in response to the COVID-19 outbreak. Wildrose is one of the many LGBTQ businesses in Capitol Hill that rely on the influx of revenue during Pride every June, which will not be continuing with in-person events this year. “We are just coming to grips that Pride as we know it is not happening,” Manning says. (Dorothy Edwards/Crosscut)

Martha Manning says it was like witnessing a slow-motion tsunami. As an owner of the Wildrose on Capitol Hill, she had started planning the lesbian bar’s annual Pride Month block party in January. The coronavirus arrived just a few weeks later and, by mid-April, it became clear there would be no marches or festivals this June.

Along with the celebrations, the financial outlooks of the Wildrose and other nearby businesses dissipated as well.

It has never been easy for the Wildrose, which Manning has co-owned with Shelley Brothers since 2000. As Seattle’s only surviving lesbian bar, it’s been among the city’s most iconic queer spaces since opening in 1984. That survival stems in large part from support of the community and funds from its annual, three-day Pride Month block party.

“It’s the biggest thing of the year for us by far,” Manning says. “It keeps us going.”

The Seattle Pride March is the largest in the state and among the largest in the country, regularly attracting an estimated crowd of about half a million. It didn’t surprise Manning when Pride events, including her own, were canceled, postponed or turned into virtual events this year. Now, the bar owners are just trying to pay their bills. They have started a fundraiser and are selling merchandise online in an effort to fill the gap. Both have gotten other jobs to help pay expenses because the bar is now completely closed.

It’s a budget dilemma for many businesses in Capitol Hill and Seattle in general. Pride Month has typically meant a few weeks of citywide events and an increase in tourism. Without Pride events, businesses in Seattle — especially historically queer businesses — are having to reconfigure plans around a month that’s usually lucrative enough to sustain them and even build up their reserves.

“It’s going to change the landscape of Pride in general,” says Ilona Lohrey, vice president of membership and programs with the GSBA, the state’s LGBTQ and allied chamber of commerce. “And people definitely want that. Just because we’re in a stay-at-home environment doesn't mean people don't want to celebrate Pride and do that however possible.”

Stores in Capitol Hill, the state’s largest concentration of small businesses in one neighborhood, with many queer-friendly spaces among them, are particularly concerned. With so many businesses competing for limited grants and loans, Lohrey says it’s going to be difficult to make up for lost profits.

“Pride is the single biggest day for most of the businesses that operate on Broadway,” says Egan Orion, director of both Seattle’s PrideFest and the Broadway Business Improvement Area. “Just to imagine that we might get to the other side of this and have some of our historic businesses just go away forever is terrifying for me … and it’s heartbreaking for those businesses and staff who’ve dedicated so many years to being part of the community.”

For now, organizers are planning to host virtual events in June with plans to reassess the possibility of in-person events in late summer or early fall. But Orion says he knows it’s not the same for businesses that depend on the month’s sales to make end’s meet.

For Brand Pride, a small, lesbian-owned business in Seattle, Pride month has been a primary focus since it first opened 20 years ago. The business supplies Pride-themed merchandise, like rainbow flags, T-shirts and other items seen around Seattle in June. Brand Pride CEO Elise Lindborg says the pandemic has forced the business to completely rethink its plans.

During the beginning of the coronavirus outbreak in Seattle, Lindborg says, Brand Pride was able to get cloth masks and sanitizer to sell, which helped the company to get by. Now, it’s focusing its energy on providing clients with “pride kits,” basically Pride-themed packages companies can send their employees in June. It also plans to sell Pride gear on its website this year, including rainbow face masks and merchandise emblazoned with the phrase “you can’t quarantine pride.”

“We had close to a million dollars in potential orders in the pipeline, and now that’s all gone,” Lindborg says, reflecting on its usual business expectations for the month.

The business can’t make up that money, she adds, and rounding up merchandise is harder to do quickly since many of its suppliers are at limited capacity because of the outbreak. Still, Lindborg says she’s hoping to make enough to pay remaining employees and make it through the year: “It’s survival mode right now.”

Pride Month organizers still hold hope that in-person events can make a comeback if circumstances become safer later in the year. For now, Elayne Wylie, co-executive director of the Gender Justice League, says mimicking the community aspect and support found during Pride Month is the league's hope in constructing a virtual version of the celebration. For the Trans Pride March, which her organization organizes, community support has kept up its momentum. That march saw 3,000 participants when it first began in 2013 and grew to a crowd of about 25,000 last year. Wylie says she and other organizers are working to ensure that those who’ve depended on the month emotionally and financially can find a safety net among supporters now.

“This is an incredible opportunity to raise funds from our community and put funds back out into the hands of artists and speakers and leaders,” she says. “It’s difficult, it’s challenging, but we’re hoping technology will offer a way to do that.”

And for people who’ve made memories and believed in the queer businesses that have withstood the hurdles and challenges of decades past, it’s important to keep them alive. For Manning, the Wildrose has been that place: It’s where she met her wife and friends, where she’s been during elections and where she was when same-sex marriage was legalized. It’s where she wants to be in the future, too.

“It’s the light in the dark,” she says. “I wouldn’t want to be anywhere else when those things are happening.”