Sheltering in place with King Lear, the perfect play for a pandemic

Shakespeare understood the fragility of human institutions — something we can all suddenly relate to. 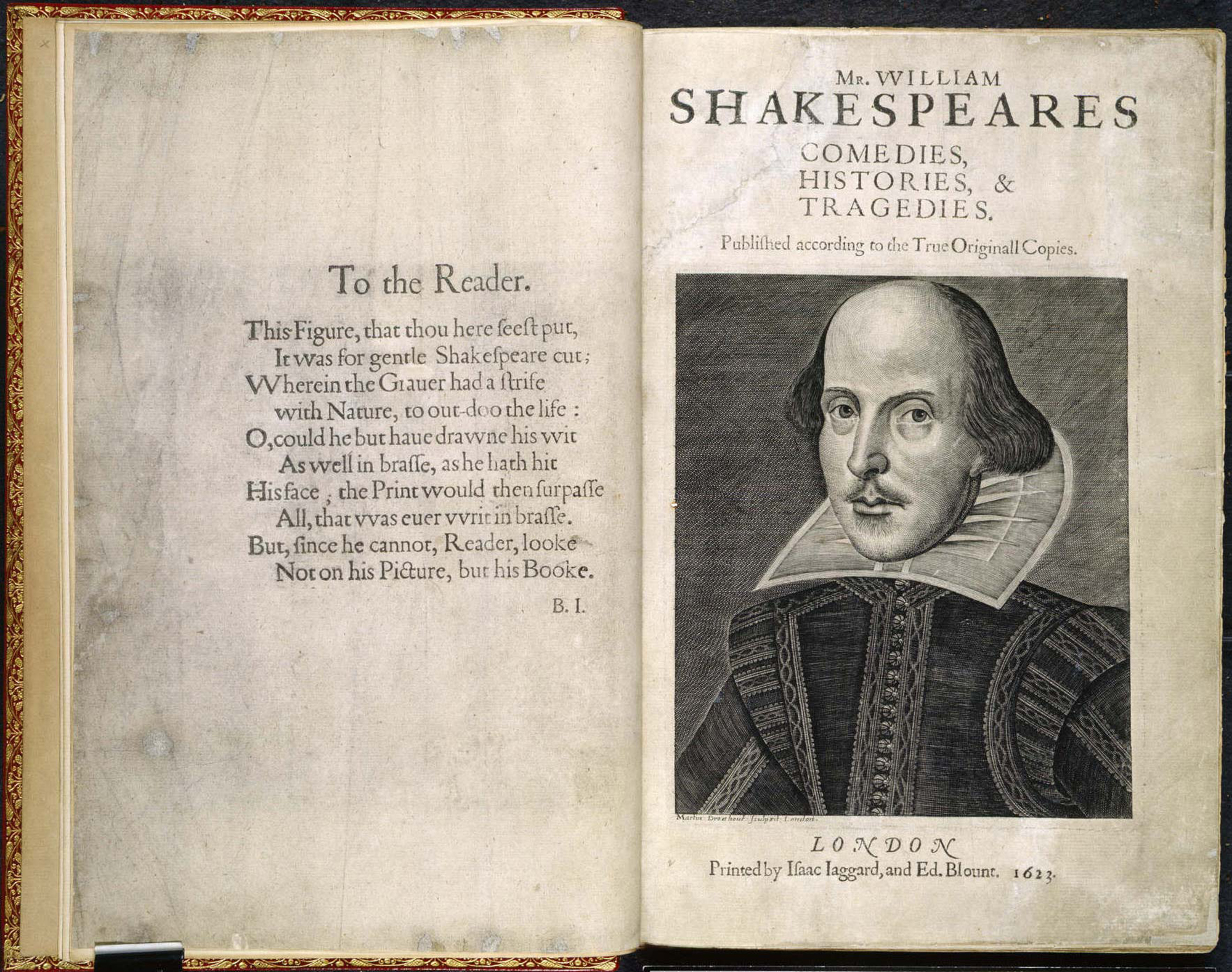 The first collected edition of William Shakespeare's plays, collated and published in 1623, seven years after his death. (British Library)

By now you may have heard that William Shakespeare wrote some of his greatest works in the shadow of the plague. It swept through his hometown, Stratford-upon-Avon, in 1564, the year Shakespeare was born; ravaged London in the early 1590s and again in 1603, when as much as a quarter of the city’s population perished; and three years later may have struck the house where Shakespeare lived, killing his landlady. No one knew the plague’s cause or how it spread, but what we’re now calling “social distancing” seemed prudent: During these outbreaks the authorities often shut down public gathering places, including the theaters. For Shakespeare — an actor before he was an author — that meant more time to write.

A week or two into our own 21st century pandemic, Twitter took this nugget and ran with it, riffing on the theme: “Shakespeare wrote King Lear while in quarantine. What are you doing with your time?”

Creating timeless works of art might not be in the cards for most of us, but binge-watching Netflix isn’t our only option, either. How about experiencing some of Shakespeare’s plays? King Lear happens to be my favorite, so I decided to reread it. Then I reread my favorite critical essay on King Lear. Then I listened to The Year of Lear: Shakespeare in 1606, in which James Shapiro explores how the playwright’s life and work that year were shaped by the plague, and even more so by political and religious turmoil following the Gunpowder Plot. And finally, for good measure, I watched Trevor Nunn’s 2008 version of King Lear, with the incomparable Ian McKellen in the title role.

Now, having emerged on the other side of this odyssey more or less unscathed, I’m here to report that King Lear is the perfect pandemic play.

There’s no actual plague in the story. In fact, the plague barely figures into any of Shakespeare’s plays; people were living the horror of it; perhaps they didn’t want to see it, or act it, again on stage. But plague does appear in King Lear as curse and metaphor — “A plague upon your epileptic visage!” — “Vengeance! plague! death! confusion!” Lear calls his eldest daughter Goneril, who has lately cast him out of her home, a disease that’s in his flesh: “thou art a boil, / A plague sore, an embossèd carbuncle, / In my corrupted blood.”

But that’s not what I mean. It’s not about disease, literal or figurative. It’s more that the whole world of the play, its atmosphere, its story, the moral and philosophical problems it poses, feel more familiar, more resonant, more urgent now than they did before COVID-19.

The sprawling plot of King Lear isn’t easy to summarize, but you’re likely familiar with the setup: An old man flies into a rage and disinherits the daughter who loves him when she refuses to flatter his vanity; consequently, he divides his kingdom between her two elder sisters and their husbands. In the unraveling that follows, those who are cruel, devious and hungry for power and property quickly gain the upper hand. Those who are loyal, trusting and kind are cast out, driven underground, hunted down. Schemes are hatched, letters are forged, eyes are gouged out, madness is suffered and feigned, swords are drawn and crossed. In the end — well, we’ll get to the end.

The play is permeated by a sense of the fragility of human institutions. It’s a feeling we can all suddenly relate to, as the structures that normally order our lives and make us feel secure have been upended — jobs evaporated, businesses shuttered, hospitals shifting to triage as though in a war zone. In King Lear, this shattering of normality allows people’s true natures to come to the fore, unfettered by social convention, and we’ve seen some of that, too — much of it thankfully for good, as well as for ill. Our world also shares with Lear’s a sense that the tragedy we see unfolding was one waiting to happen, that the institutions now crumbling were already rotten beneath the surface, shot through with injustice, hypocrisy and corruption. “Through tattered clothes great vices do appear: / Robes and furred gowns hide all.”

On this point, it’s mighty hard to avoid drawing a parallel between Lear and Trump. And why not? Each is a capricious and conceited old man, much at fault for his country’s descent into chaos. That’s probably where the similarity ends, but there’s also a kind of wish fulfillment. We get to imagine our president stripped of authority, wandering in rags in a wild gale, raving mad but with flashes of clarity, finally seeing the suffering his policies have inflicted on the poor, crying aloud some 21st century version of Lear’s soliloquy:

“Poor naked wretches, wheresoe'er you are, / That bide the pelting of this pitiless storm, / How shall your houseless heads and unfed sides, / Your lopped and windowed raggedness, defend you / From seasons such as these? O, I have ta'en / Too little care of this! Take physic, pomp, / Expose thyself to feel what wretches feel, / That thou mayst shake the superflux to them / And show the heavens more just.”

Instead, Trump is still in power, and mailing $1,200 checks to some of us poor subjects falls a good deal short of this kind of repentance.

Cosmic justice isn’t really in the spirit of King Lear, anyway. While it’s true that many of the play’s characters are destroyed in part by their own evil, Shakespeare goes out of his way to puncture the notion that our fates are divinely ordained, or that everyone ultimately gets what they deserve. When the credulous Gloucester expounds on the “late eclipses in the sun and moon” and what they portend, we laugh at him along with his conniving son Edmund. Unlike many of Shakespeare’s plays, this one contains nothing of the supernatural: no ghosts urging retribution, no indentured spirits, no “weird sisters” spouting prophecies. If there are gods, they seem not to offer protection or mete out reward and punishment so much as rain down indiscriminate destruction. As Gloucester, newly blinded, says later with growing inner sight: “As flies to wanton boys are we to th’ gods. / They kill us for their sport.” Sounds a lot like a pandemic to me.

For all its bleakness, however, King Lear doesn’t lapse into cynicism. We don’t get a tidy moral universe, but neither are we left with Edmund’s all-is-permitted brand of atheism, which one might anachronistically say feels a little Nietzschean. Ultimately, the indifferent universe of King Lear elevates rather than negates our human responsibility for one another. Good endures in those characters who maintain, or discover, their integrity under duress. And, at the very center, is Lear’s own spiritual journey. As the actor Ian McKellen describes it, when the play begins Lear believes he has a special relationship with the gods; by the end, “it’s pretty clear that he’s lost his faith. But in losing his faith, he’s discovered his humanity.”

This discovery, embodied in Lear’s moving reconciliation with Cordelia, is not where the curtain closes. Instead, Lear watches his daughter brutally hanged in their shared prison cell, Edmund’s dying reprieve arriving moments too late. Finally, Lear himself dies, heartbroken, awash in the full horror of this final issue of his original sin. This was all Shakespeare; in the play’s source material, Cordelia’s forces win the war and Lear is restored to the throne. (Many playgoers must have found Shakespeare’s choice disquieting, because an altered version, with a happy ending, was adopted in the late 17th century and reigned for a century and a half.)

But the tragic end is integral to the play’s meaning, and also to its heightened relevance amid a pandemic. King Lear portrays, unflinchingly, a part of our condition as beings conscious but not omniscient, responsible but not omnipotent: the spilling of our actions out into the universe in ways we don’t fully intend and can’t retract. That feels suddenly important now, when utterly quotidian acts, normally of little moral weight — visiting friends, failing to wash one’s hands, touching a doorknob, sitting next to a stranger on the bus — can have deadly consequences. Our conventional ideas of morality are unprepared for this new world, and the kind of existential culpability that it creates. It’s terrifying.

The critic J. Stampfer locates the power of the play in how it awakens this terror in its audience. In the end, Lear’s tragedy is “not the tragedy of hubris, but the tragedy of penance.” He has “paid every price and been stripped of everything a man can lose, even his sanity, in payment for folly and pride.” But it doesn’t matter; Cordelia still dies, Lear still dies. His fate “activates…the fear that whatever penance a man may pay may not be enough once the machinery of destruction has been let loose, because the partner of his covenant may be neither grace nor the balance of law, but malignity, intransigence or chaos.”

That may sound like reason enough to despair. But I believe dwelling with this fear can lead us in a different direction: first to a certain kind of hope, founded in astonishment at what has already emerged from the chaos; and then resoluteness, a sense of responsibility for continuing the project. After all, life itself is a kind of fortress against entropy. Society is another, outer fortress, or if you prefer your metaphors less militaristic, a shelter — one we construct together, aware or not of what we’re doing, to protect ourselves and each other from the “pitiless storm” with its “hurricanoes” and its “all-shaking thunder.” Within that shelter we can, miraculously, though imperfectly, create a world in which the repercussions of evil are bounded; penance is matched with forgiveness; and honesty, trust and compassion prevail.

A deadly epidemic, whether the plague in Shakespeare’s time or COVID-19 in ours, is entropy intruding into that shelter, forcing us to refashion it rapidly in new and unfamiliar ways — and, at the same time, revealing its structural weaknesses, all the ways in which, for many, it’s been as much a prison as a home. Our institutions are indeed fragile and flawed, but that only infuses the acts of mending or overhauling them with more urgent meaning. It’s too much to ask of a 400-year-old work of literature that it should tell us how to do this; it’s enough that it points to the necessity of our figuring it out.