We need big and accountable government to beat COVID-19, not profit-motivated business. 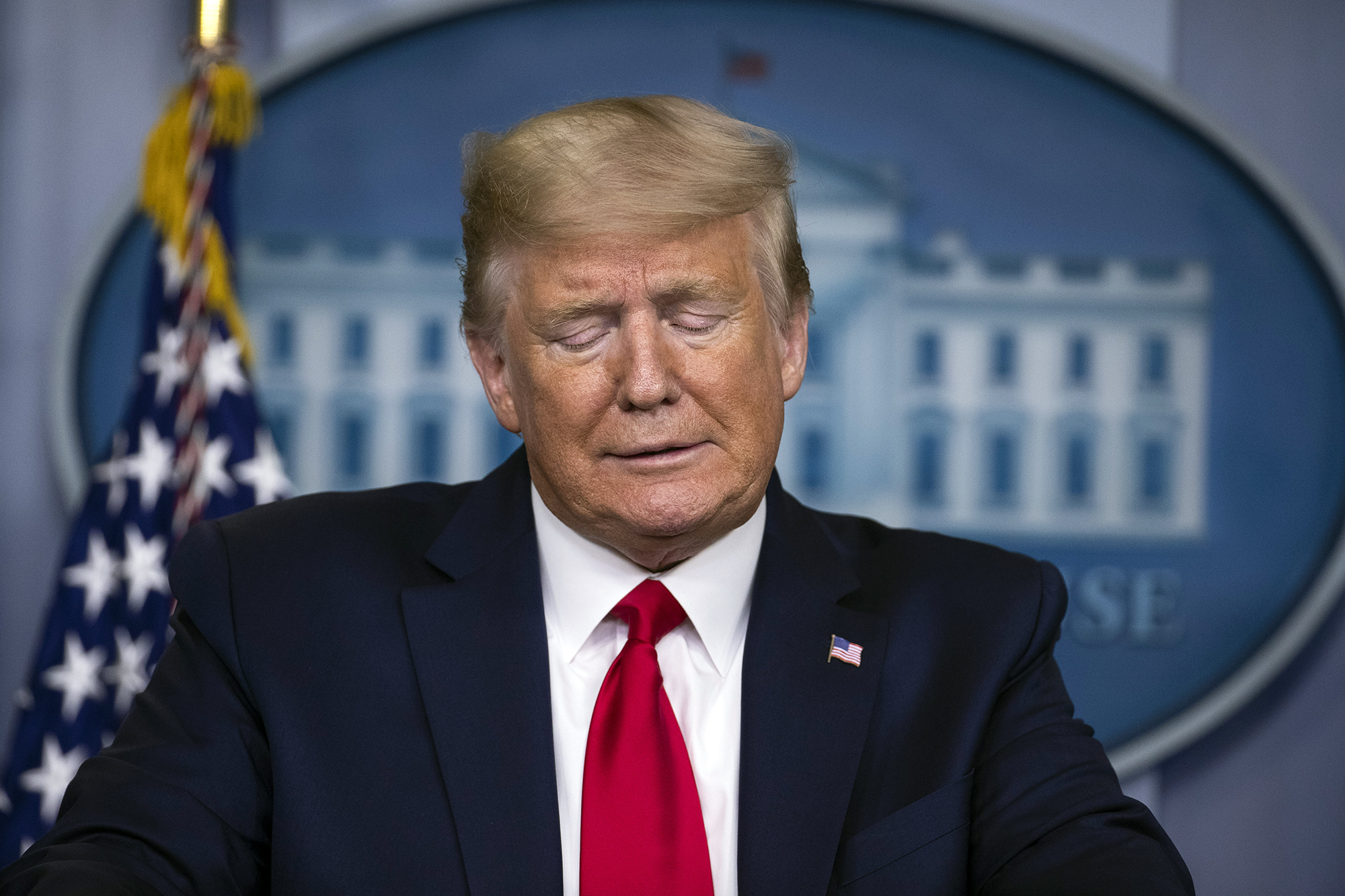 President Trump holds a press briefing about the coronavirus at the White House, April 8, 2020. The president has declared himself a “wartime” president on multiple occasions but resisted the call to lead a robust federal response, opting instead to let states decide themselves how to obtain medical supplies. (Alex Brandon/AP)

The president says he’s fighting a war. Imagine his current tactics being used in a ground-and-air war. Each governor would be required to negotiate with gun makers for weapons to defend a state against the attacker. When the deal was done, the federal government would take guns from its stockpile, guns I’ve paid for with my taxes, and give them to the gun makers. The gun makers would then use their normal sales strategies to sell those guns to the highest bidder in each state. The governors would have to bid against one another, the federal government, maybe even our allies, to buy the guns and have them delivered to their states. They would pay the gun maker, who got the guns for free by the way, with my tax dollars. To complicate matters, each governor also must ensure the products they receive are not flawed, unusable or substituted by the distributor for something other than what they requested. Need aircraft? Repeat the process with aircraft manufacturers. Need bullets? How about armored vehicles? Let’s not forget helmets or boots.

By the time the governor of the first attacked state has received goods to repel the invader, the aggressor has overwhelmed the state and moved on to the next one, which is now also scrambling to get geared up. Meanwhile, the gun maker pays nothing for the guns and I’m paying twice.

On what planet is this an acceptable way for a country to fight a war? No wonder we’re losing! Apparently the president has never read, or had read to him, the preamble to the Constitution.

We the people of the United States, in order to form a more perfect union, establish justice, insure domestic tranquility, provide for the common defense, promote the general welfare, and secure the blessings of liberty to ourselves and our posterity, do ordain and establish this Constitution for the United States of America. (Italics mine)

In the April 2 White House daily briefing, Jared Kushner told the nation that the federal stockpile “is supposed to be our stockpile; it’s not the states’ stockpile that they then use.” Surely this is the first time in the history of the United States the federal government has not seen its resources as belonging to everyone.

Read more: Fear is normal during a pandemic. Racism shouldn’t be

In an online interview with CBS News’ David Begnaud, retired Lt. Gen. Russell Honore, who stepped in and coordinated the response to Hurricane Katrina when it became apparent the Federal Emergency Management Agency was failing, contrasted how the federal government is designed to work with how it’s working now. He railed at the insertion of private companies into the distribution pipeline and repeatedly noted he had never seen anything close to the inefficiency of the current process. “Looking at this thing in the rear view mirror, it’s gonna be real bad,” he said, adding later: “It would be OK if it was working. It’s not working. … It’s like they’re making this stuff up on the way to the podium.”

What, one might ask, is behind this obviously failing new way of doing things? Is it greed? Ignorance? Incompetence and ineptitude? I don’t think so. There is a philosophy underlying these White House decisions, a belief system that makes sense of it all. Simply put, the current president believes everything must result in economic profit. Unmoved emotionally, psychologically or financially by the deaths and losses around him, he and his team explore ways to enrich themselves and those they perceive as their peers.

Trump and his administration are the inevitable outcome of the Machiavellian strategy begun by Grover Norquist in 1986 with his so-called Taxpayer Protection Pledge. Republicans were required to sign the pledge declaring to never vote for a tax increase at the penalty of losing GOP support in their next election. This was followed in 1994 by Newt Gingrich’s Contract With America. Brick by brick, Republicans built an infrastructure based on unraveling and weakening the federal government and turning its function over to the private sector.

As they implemented their Jenga-style agenda, infrastructure began to crumble. Among the first to be impacted was the health sector. Hospitals moved to the private sector, using reorganization and union-busting as tactics to lower operating costs; they decreased staff salaries and increased hours while providing fewer services. According to a 2012 study by Stefano Villa and Nancy Kane, there were “296 public hospital conversions … in the period 1980 to 1991 and 289 in the period 1991 to 2001.” Health maintenance organizations (HMOs) begun as partnerships between doctors and patients morphed into mediators between doctors and patients. Even Medicare was soon undermined by HMOs. Instead of a single government-run system using the resources of the entire country to provide equal services across America, there is now a mishmash of plans and options available to people of differing economic status.

So here we are. Instead of one pipeline sending lifesaving equipment and resources to each state as needed, we watch as the president and his son-in-law declare that governors who are nice to them will get resources, their millions of constituents be damned. Meanwhile, the person we elected to lead our state has to beg for basic supplies to keep local “troops” safe and the COVID-19 enemy from spreading quickly through and beyond our state.

This virus, like many things, was and is not under our control. What we learn from it and how we behave afterward is. We already know certain services shouldn’t be privatized, like firefighting and police. At what point do we put health care on that list?

As the West Seattle Bridge crumbles, as airplanes our region once proudly produced now endanger lives, as many still struggle to recover from the private sector’s destruction of the housing market and as we fight a killer that is no respecter of people, let’s consider how small a government we really want. As our next election rolls around, let’s examine the underlying philosophies of the candidates and extrapolate the outcomes if they put those beliefs into practice. Personally, buttressed by the actions revealed during this pandemic, I would rather implement strong accountability structures within an effective government run by seasoned public servants than turn over essential services to the vagaries and values of the private sector.