Washington farmers markets are reopening, but won't look the same

While marketplaces have long been a place of community, organizers say social distancing requires that they're now ‘all about business.’ 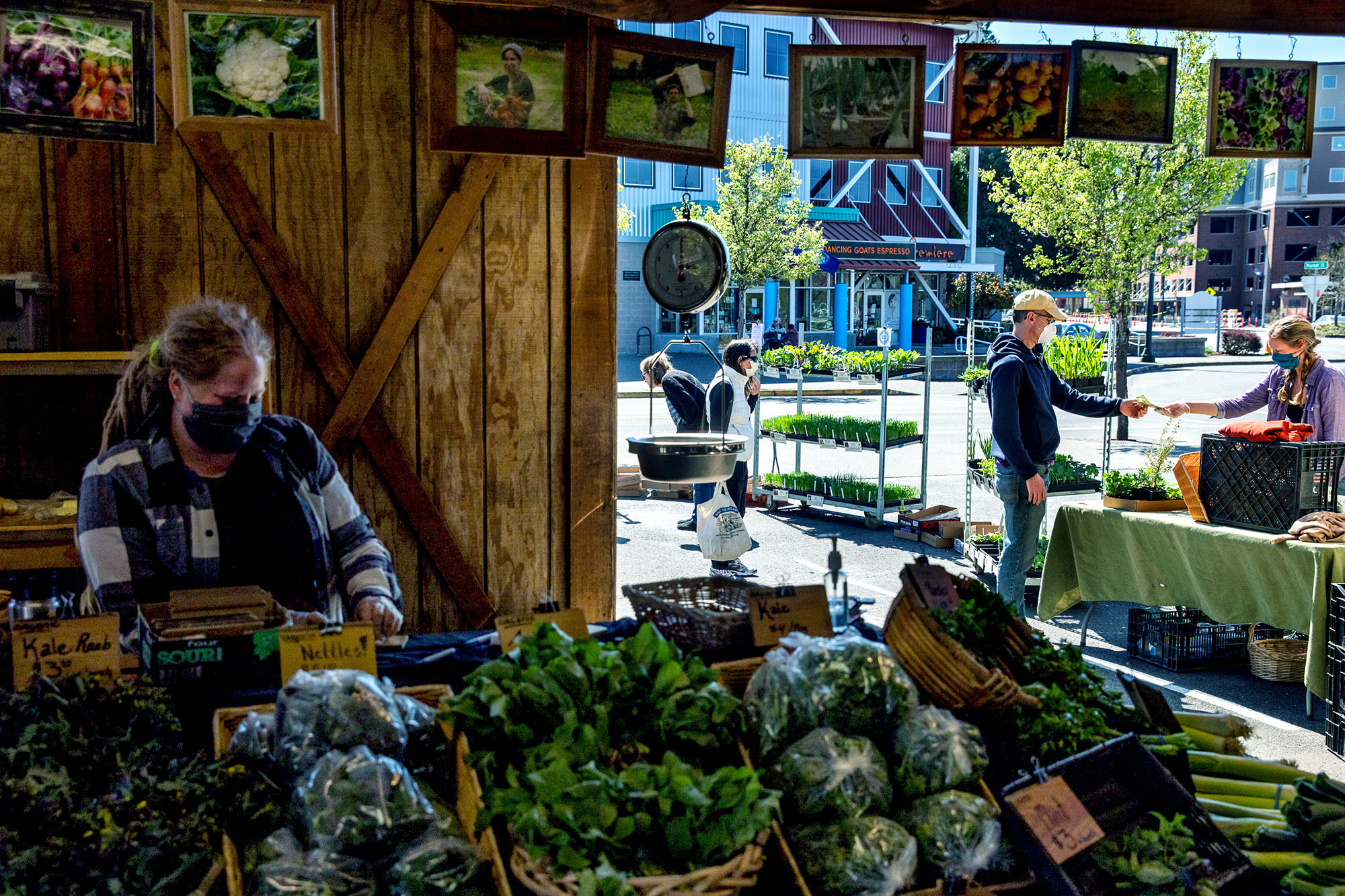 The Proctor Farmers’ Market in Tacoma was supposed to open for the season almost a month ago. When it didn’t, Scott Gruber, president of the market’s board and a longtime vendor who has depended on sales there to get his product out, was at a loss.

Orders to shut down nonessential businesses and to practice social distancing to avoid spreading coronavirus have affected all parts of Gruber’s work, which also includes landscaping and construction. As the owner of Calendula Farm, he had also been managing a plant nursery, growing food-producing plants like berry bushes and fruit trees for the past year to sell to customers to replant right as they ripen for harvest.

So without markets, Gruber had to get creative. Instead of worrying whether his plants — and his business — would miss their window before the farmers markets reopened, he decided on a new plan. He began delivering his plants via truck throughout Tacoma and neighboring cities after publicizing the change online.

“The response has been tremendous,” he says. “It’s literally been the thing that’s keeping us going.”

Now or never is the reality for many farmers: Fruits, vegetables and other farmed products like flowers have to be sold before they go bad. A delay could mean a year’s worth of planning and tending to plants is wasted.

Since the governor’s stay-at-home order was issued on March 23, the status of farmers markets has been in flux. Originally, the markets weren’t listed as a protected business, but Gov. Jay Inslee later added them to the list of essential businesses that could remain open. But how they would remain open has, at times, been unclear. As a result, marketplace organizers have had to quickly figure out a way of reconfiguring the way they operate.

“It’s a real cultural shift for markets,” says Colleen Donovan, executive director for the Washington State Farmers Market Association. “Instead of being social gathering points in the community, we need shoppers to shop as efficiently as possible. It’s going to be, really, all about business.”

Organizers have cut out all socializing aspects. Donovan says marketplaces have started revamping their messaging, emphasizing their utility.

Many markets remain closed. Some simply need extra time to plan their setup around social distancing procedures, as has been the case with Proctor Farmers’ Market, which now plans to open April 25.

Ways to help during coronavirus: How to share your time and resources.

Others have seen pushback from local government and citizens concerned about the safety of keeping them going amid a pandemic. Few are open now, although some have reworked their procedures to make operations work, like the Ballard and University District farmers markets in Seattle, both of which reopen this weekend, and the Olympia Farmers Market, which has continued to run without pause.

Keeping the markets going in whatever way possible is critical, Donovan says. Customers rely on them for fresh, healthy food, especially people who can’t easily access grocery stores or use food-assistance programs like SNAP and WIC, which some markets accommodate. For vendors, sales during the market season lay the groundwork for the rest of the year and provide a main avenue for getting product to customers.

“Small family entrepreneurs rely on those sales to be able to make it into the summer season,“ Donovan says. “If they have to put their tulip bulbs in the compost pile, it’s not just lost sales, but it critically handicaps their ability to sustain themselves as businesses.”

And she says farms operate differently than many other typical businesses: The planning required by planting and harvesting means that what happens now could have long-reaching impacts this year and the next.

“It’s so precarious on a good year that this added stress has us worrying about the long-term futures,” she says. “And of what our local food systems are going to look like.”

Rachel Reister, owner of Reister Farms in Washougal in Clark County, says farmers markets made up about 20% of her sales before the stay-at-home order. A larger chunk, about 40%, came from restaurants, while the rest came from grocery stores.

With so many restaurants closing, those numbers have changed. Since the stay-at-home order, she has leaned more heavily on farmers markets than ever, depending on the few that remain open for business.

“The fact that farmers markets are still open has been the lifeblood of our business,” Reister says. “It’s the only way we can [interact with] our customers in a safe capacity.”

While she has continued selling her products in cities like Portland that have open markets, other places where she did business have remained closed. She’s a board member and frequent vendor at the Vancouver Farmers Market, which was supposed to open March 21, but has stayed closed.

For the Vancouver Farmers Market, it’s been a rough journey toward an opening day. Despite the governor’s order, city officials and locals expressed concern about the safety of having a farmers market in the Clark County city. Jordan Boldt, the market’s executive director, quickly received calls after news that the market was allowed to open was publicized. Many callers were incensed, concerned about crowding and demanding that the market remain closed for safety reasons.

Boldt says that after hearing about changes the market would see, people often changed their minds. Many weren’t aware of the dramatic overhaul that their market, like others, would be subjected to. Boldt says the markets that have remained open are limiting crowds, adding space between vendors, requiring face masks and following other new safety procedures.

The Vancouver Farmers Market hopes to open by the first week of May. While farmers markets are often gathering spaces, Boldt says that, for now, markets are whittling their design down to highlight their first priority.

“At our core, we’re a grocery store,” Boldt said.

The Olympia Farmers Market is one of the few that have remained open in Washington. It has limited market days to twice a week and has taken cues from others. Organizers now cap the number of patrons in the market at a hundred, recommending that visitors keep their shopping time to about 20 minutes. They’ve cut out some artisan vendors to allow for more space between stalls, while refocusing the market on essential food products, which are now prepackaged. And with entertainment and seating gone, it’s easier to discourage patrons from lingering.

In some ways, Jim McGinn, a vendor and president of the Olympia market, says it could be safer than a grocery store. The product is touched by fewer people, and the system to hamper the spread of the coronavirus within the market has evolved and become more intricate with each week.

“There’s so many rules, and they keep changing,” McGinn says. But he’s optimistic: Despite the changes, he says, the turnout has improved, and many customers say they’re showing up to support the farmers’ businesses.

A new way to sell

To make up for the markets that have remained closed, many vendors have shifted to online promotion of their products. They have turned to Facebook pages or other social media to take orders or start raising funds to keep them afloat through the pandemic.

To help businesses without their own sales infrastructure, some farmers markets’ websites list participating vendors, said Jennifer Antos, executive director of Seattle Neighborhood Farmers Markets. Some websites are also starting donation drives, like her Seattle organization, for their vendors.

In general, many farmers have seen an outpouring of community support as well. Since Gruber, the president of the Proctor Farmers' Market, started shipping orders, he says he’s seen fruit trees — often one of his slowest products to sell — selling out. He says he’s also completely sold out of elderberry plants, which are known as immune system boosters. And with the Proctor Farmers' Market hopefully opening soon, he’s worked with other organizers to boost the visibility of other vendors’ products. Some vendors, he says, are taking preorders or will travel to meet customers  at a designated spot to deliver them.

Still, the road ahead is uncertain. Gruber says he and other farmers are already wondering how much they should prepare for next year.

“Worst case scenario, if it’s a hard time for everybody, what will people want to spend money on?” he says. “Farmers have to plan in advance. I don’t think many of us know.”

But even after the shock he felt when he first heard the news about market closures, he didn’t think this had to be the end. After all, farmers already deal with bizarre weather changes and shifts in the environment — they’re used to adapting. With community support, he’s certain farmers will find a way to make things work.

“It’s not easy, and you have to pivot on a dime to change plans,” he says. “But farmers of any sort are pretty well-suited to be able to instantly change what they do, and figure out how to get by.” 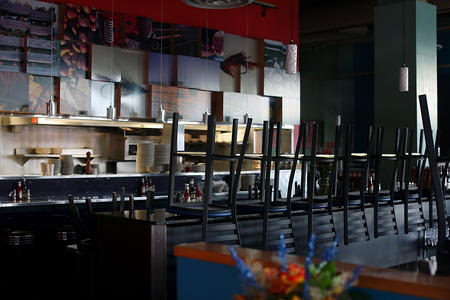 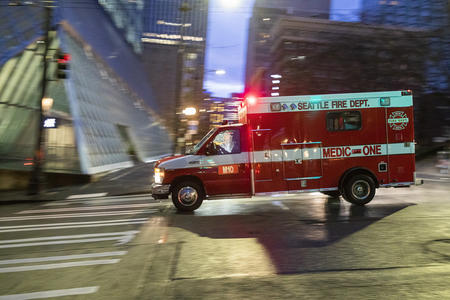