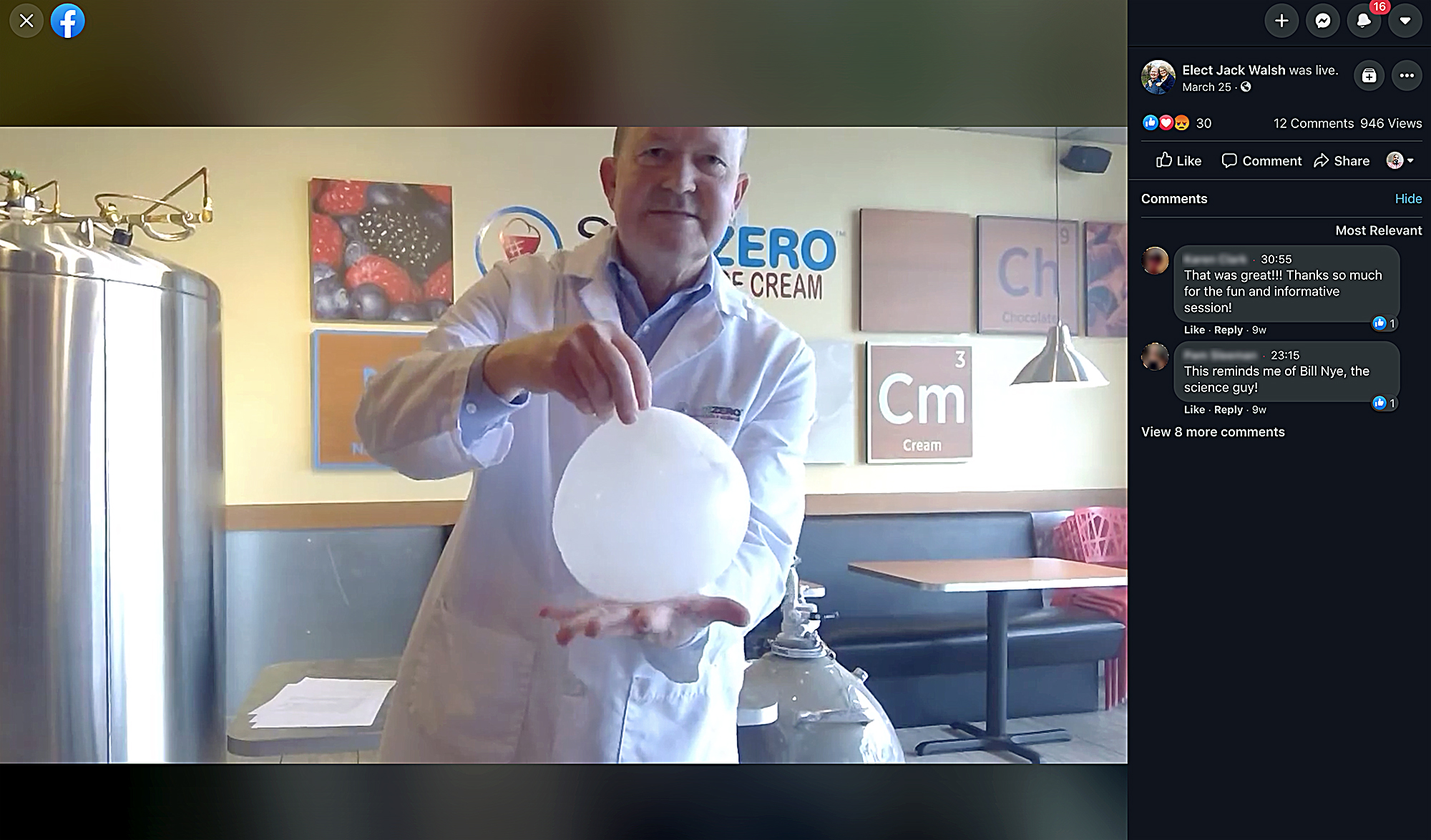 Unable to knock on doors and campaign as he expected for a state legislative seat, Jack Walsh, a Republican running in the Federal Way area, turned to Facebook to livestream lessons on how to make liquid-nitrogen ice cream. As COVID-19 health risks limit movement, many political campaigns are getting creative in the age of social distancing.

Within weeks, Gov. Jay Inslee issued a stay-home order aimed at slowing the spread of COVID-19. And it quickly became clear that up close, personal chats on people’s doorsteps might not be the best way to win over voters during a pandemic.

So Walsh — a Republican candidate for the state House —  turned on the cameras, broke out the liquid nitrogen and began making ice cream.

Walsh’s livestreamed lessons on how to make liquid-nitrogen ice cream are just one example of how political campaigns are getting creative in the age of social distancing.

“It’s not just a means of campaigning, but also helping the kids get excited about science,” said Walsh, who owns Sub Zero Nitrogen Ice Cream in Federal Way. He is challenging state Rep. Jesse Johnson, a Democrat who was appointed earlier this year.

Typically, knocking on doors and meeting voters face to face is a key part of successful campaigning — especially for positions like city council member and state legislator, which don’t generate as much publicity and money as federal or statewide races.

But, as has been the case with so many other things, the new coronavirus has halted that type of retail politics, both in Washington state and around the country.

More on politics and COVID-19: Ask Gov. Inslee about the state's coronavirus response.

For candidates, time is running out to appeal to voters before the Aug. 4 primary, which will decide which two candidates for each position advance to the general election in November.

Johnson, Walsh’s opponent, has also been experimenting with new ways of campaigning. The former Federal Way City Council member has been hosting online question-and-answer sessions focused on COVID-19, while broadcasting the forums to his constituents via Facebook Live.

“People chime in and ask questions of myself or my guests on the show,” said Johnson, who represents the 30th Legislative District. “It’s a great way to talk with people directly.”

Seferiana Day, a political consultant who works with Democrats, said that in many ways, the increased emphasis on online campaigning has made it easier for people to participate in local politics.

The virus has “changed everything,” Day said, “but it has also made us realize we can be flexible and make things work.”

Last week, for instance, the 37th Legislative District Democrats held a meeting to endorse candidates, something the group does every election season. Normally, such a meeting would be considered “extremely large” if 150 people showed up, said Stephen Reed, the organization’s chair.

But last week, more than 250 people logged on through Zoom, the online meeting platform, to hear local candidates speak and decide which ones the group should endorse.

If that same meeting were held in person, “Our room wouldn’t even fit that many,” Reed said.

“I do think it is hard for folks to get to the physical meetings sometimes,” Reed said. “Since most everyone is stuck at home right now, it’s much easier to get an audience online.”

Still, there’s the issue of raising money. Many in-person fundraisers have been struck from this year’s calendar.

With fundraising events unable to proceed as they normally would, candidates are swapping house parties for Zoom calls in which they can make a socially distanced pitch for donations.

“The truth is, people who are active in politics go to events not just to meet and talk to the candidates … they want to meet and talk to everybody else, too,” Wyble said. “That’s kind of a crucial element of political fundraising. And that’s what’s missing in a Zoom event.”

Even so, Wyble said one of his candidates, former state Rep. Kristine Reeves, has had some success raising money through Zoom meet-and-greets. Reeves is one of several people running to replace retiring U.S. Rep. Denny Heck, D-Olympia, in Congress.

Given the limitations of Zoom get-togethers, traditional phone calls remain an important way of soliciting campaign donations. But because of the global crisis, the nature of those calls has fundamentally changed, multiple political consultants said.

For the first month of the pandemic, “it wasn’t even appropriate to ask” for money, said Kevin Carns, executive director of the Reagan Fund, which supports Republican state House candidates.

“The first round, all we were doing was offering resources,” Carns said. That included telling people how they could file for unemployment and how to reach their local health department, he said.

“We weren’t talking about ‘the Democrats raise taxes, vote for us,’ because it would have been really tone deaf to do that at that time,” Carns said.

On the flip side, people are actually picking up the phone more nowadays, candidates said.

Normally, Johnson said he would expect only about 15% to 20% of his campaign phone calls to go to a person instead of a voicemail box.

Now when he calls to check in with people, he ends up talking to someone closer to 50% of the time.

“People are home, and they want to talk because they’re bored,” Johnson said.

Initiative campaigns face different challenges. The July 2 deadline for submitting signatures to qualify an initiative for the November ballot is fast approaching.

Yet right now, signature gatherers are unlikely to approach voters in person to urge them to sign petitions, given the public-health guidelines that recommend staying at least 6 feet away from others.

Those limitations have caused ballot-measure campaigns to rely more heavily on other tactics, including asking voters to sign petitions and return them by mail.

Crystal Fincher, a political consultant working on a ballot measure called Treatment First Washington, said the campaign is partnering with community organizations to help get the word out about the initiative. The ballot measure, officially known as Initiative 1715, would decriminalize low-level drug possession, referring people to drug treatment programs instead of arresting them. It would also increase funding for treatment.

Fincher said that when it comes to community outreach, it makes sense to team up with organizations that are already offering valuable services on the ground, and not “reinvent the wheel.”

In a similar vein, some politicians are also connecting with voters through community service, such as by delivering food to people’s homes.

Twice a week, Johnson volunteers to help bring food to community members who need it. He said this allows him to have meaningful interactions with constituents from a safe distance.

“When they see that their representative is showing up with food at their door, I get a chance to have conversations — albeit from 10 feet away,” Johnson said.

Walsh, the Republican candidate, said he hopes his ice-cream-making videos also help the community in their own way. He has done the presentations in-person before at local schools, but this is the first year he has put them online.

“With the current situation with a lot of kids at home, as well as a lot of adults at home, we thought it would be a great opportunity to bring some education out to you, in your homes or wherever you are at,” Walsh said during one of his Facebook Live sessions in late March.

He then poured liquid nitrogen into a bowl, the white vapor swirling around him, and added a balloon and gummy bears as he explained the scientific method.

By the lesson’s end, he had shown his audience how to freeze milk, cream and sugar into raspberry ice cream.

Day, the Democratic political consultant, said she expects that more campaigns will continue to incorporate Facebook Live and other digital tools into their strategy in the future, now that they have seen how effective they can be at engaging voters.

“It really is about being available,” Day said. “So much of it right now is showing up online every week … just having a dialogue and taking questions, and not being afraid to really be accountable to people.”