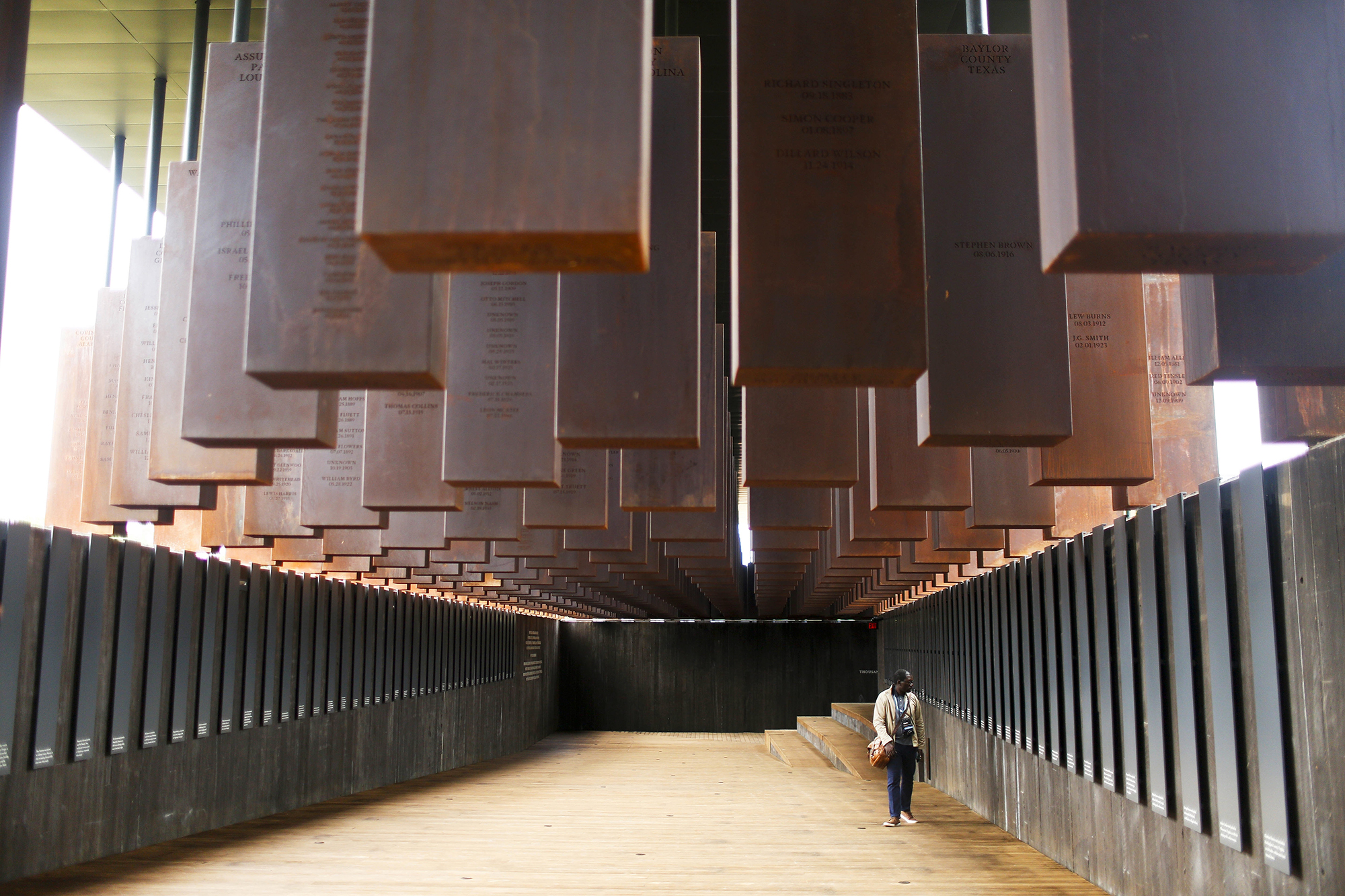 Patrons walk through the National Memorial for Peace and Justice, a new memorial to honor thousands of people killed in racist lynchings, in Montgomery, Ala, April 23, 2018. (Brynn Anderson/AP)

Investigative reporter Jerry Mitchell is a man in pursuit of justice and public memory. That seems especially important in these times of COVID-19, when racial disparities are being exposed in crisis. The New York Times, for example, recently reported a “striking racial divide” between the impacts of COVID-19 on nursing homes with Black and Latino residents versus those white residents, no matter where they are or the quality of care they’re receiving. Understanding the background and causes of such disparities is essential to finding solutions for this and future epidemics.

In addition, the pandemic and social distancing have not ended other acts of racial injustice, such as the recent murder of Ahmaud Arbery, an unarmed 25-year-old, in Georgia. Three men are accused of killing and filming Arbery’s murder while he was jogging through a “white” neighborhood, an event that clearly hearkens back to the era in which Mitchell spends his time reporting: the Civil Rights period of the 1950s, ’60s and ’70s.

Mitchell was in Seattle earlier this year as part of a book tour for his memoir, Race Against Time: A Reporter Reopens the Unsolved Murder Cases of the Civil Rights Era. Most of the tour was canceled by coronavirus concerns, but Mitchell was able to give a presentation at Elliott Bay Book Company before the lockdown. The work he engages in — the practice of historical journalism in search of justice — goes on.

Two UW psychologists break down how to respond to Trump's racism.

Mitchell is a bit like Simon Wiesenthal, the famed hunter of World War II Nazis, only his passion is tracking down folks who escaped justice for some of the most terrible crimes of the Civil Rights Era. His reporting forays include trying to bring the murderers of Medgar Evers and other civil rights workers — James Chaney, Andrew Goodman and Michael Schwerner, among others — to account for atrocities perpetrated in Mississippi during the 1960s.

When we spoke in March, Mitchell looked tired. He was soft-spoken and warm. We sat in a quiet SoDo café while he sipped green tea and ate a very rich-looking breakfast confection. He was born in Texas and lives in Mississippi. He is the winner of many journalism awards, as well as the prestigious MacArthur “genius” grant.

“Mississippi is a land of paradoxes,” Mitchell told me. It has great farming soil, but lots of poor people. It has one of the highest illiteracy rates, but produces great writers. Though it can be a place of extremes, it is not a total outlier. “Mississippi is a mirror of America,” he said. People like to believe about the region’s horrors that “we never did that kind of thing.”

The day I met Mitchell I was working on a future presentation to the Pacific Northwest Historians Guild conference called “Nazis, Lynchings and the Lash Law: Why the Pacific Northwest Must Face — and Embrace — Its Dark Side.” The talk was to be given at the Seattle Public Library but was postponed to next year because of the coronavirus pandemic. It draws on work I have done for Crosscut looking at our own region’s history of racial exclusion, murder, ongoing attraction to domestic fascist groups and why this is relevant to understanding today’s news. So I had apparently been busy gazing at our reflection in the Mississippi mirror.

Mitchell’s primary focus has been uncovering the truth of Civil Rights Era acts of terror. As a courthouse reporter in Mississippi, he was inspired to dig into the three civil rights workers’ case after viewing the inaccurate version portrayed in the movie Mississippi Burning. It turned out that there were Ku Klux Klan members still living who had perpetrated it and remained unconvicted. Likewise in the case of the murder of Medgar Evers. Mitchell found new evidence in the Evers murder case, uncovered old evidence (like the murder weapon) and was largely responsible for getting the killer tried and convicted. Justice was delayed, but it finally arrived: The murderer who ambushed and shot Evers in the back, in his home’s driveway in 1963, wasn’t found guilty until the 1990s. But Mitchell’s reporting made a big difference.

Through his work, Mitchell uncovered a closely held secret: that the state of Mississippi had a spy agency called the Mississippi Sovereignty Commission, sponsored by the governor. The commission didn’t just assert state rights dogma, but also collected information on civil rights workers and intimidated, in the Evers case, jurors in earlier trials of his killer, Byron De La Beckwith. In other words, while the state prosecuted the alleged assassin on the one hand, it was busy undermining its own prosecutors’ case with the other. The state had sealed the records, but Mitchell eventually got a copy from a source. Being able to provide evidence of jury tampering was helpful to lawyers in securing a retrial and Beckwith’s eventual conviction.

Beckwith was an unapologetic racist, a self-identified member of the Christian Identity movement and believer in the creeds of the Aryan Nations and men like Idaho’s Richard Butler, whose organization has spawned the violent Nazi group, The Order. Mitchell once called Butler on the phone to get a handle on his particular thread of racist ideology.

Hearing Butler and Beckwith discuss their racist worldviews, it became clear to Mitchell that there’s a direct ideological pipeline extending from the KKK and the Birmingham church bombers to the Dylann Roofs and other white domestic terrorists of today. Roof, who killed nine Black churchgoers in Charleston, South Carolina, was partly inspired by the Northwest Front, which was led by the late Bremerton-based Nazi Harold Covington. (Covington sought to create an all-white state in the Northwest.)

In Race Against Time, Mitchell reflects on what his reporting is really about. Seeking justice is one thing, “[b]ut the more time I’ve spent on these cases, the more I’ve come to believe they are just as much a pursuit of memory,” he writes.

Mitchell says our memories of the modern Civil Rights Movement are too simplistic. He described the common public thinking around this history as, “Rosa Parks sat down, Dr. King stood up, and after that they got their rights.” Problem solved. “We’ve recast the Civil Rights Movement into what appeals to us,” he said.

It was far more complex, of course, with many more incredible people than we remember in popular history. He notes that Bob Moses, leader of the Student Nonviolent Coordinating Committee, was a major leader of the movement. Yet he has no statue, no Medal of Freedom. “Why aren’t school children taught about Bob Moses?” he asks. And Rosa Parks wasn’t even the first woman to refuse to give up her seat on the bus in Montgomery, Alabama. “She was the fifth,” he said. She was brave, but not alone. “We don’t know our history.”

White supremacism is a chronic, systemic problem in America, but it tends to erupt and come to public attention in cycles, such as during the resurgence of the KKK in the 1920s, the civil rights battles over segregation and Jim Crow in the midcentury 20th century, or the marching Nazis of today. Mitchell said white supremacism is going through an upswing. He noted Patrick Crusius, the young man accused of driving more than 600 miles to El Paso to stop an “invasion” of Hispanics in 2019. He is alleged to have killed more than 20 people. He even wrote a manifesto about his intentions, invoking language — “halt the invasion” — that is the same language used by the head of the Mississippi KKK prior to Freedom Summer, Mitchell said. “Violence is justified as self-defense. The politics of fear are in play right now,” he said, adding that fear generates hate.

Mitchell founded the Mississippi Center for Investigative Reporting, where he and two other staff members spend their time digging into the past and present of civil rights in the state. Their motto is “Shining a Light, Exposing Darkness.” It goes beyond chasing down killers but looks at systemic issues like the denial of voting rights, gross inequities in public education or the horrible conditions of Mississippi prisons. As the coronavirus pandemic has played out, it too has exposed inequities in health, schooling, even voting. Understanding the history and causes of these structural injustices is important when coming up with solutions. The embedded conditions of Mississippi mirror those in America at large.

Mitchell told me he’s been researching the history of the state funding differential between white schools and Black schools, based on figures  the state itself published. He calculates that the difference between them from 1890 to 1960 reflects an underinvestment in Black schools of $25 billion in today’s dollars. “Imagine that times 50,” he said, and you get a sense of the national scale. Such historical research helps shed light on what underlies other disparities today.

In some ways, Mitchell noted, government is also becoming less transparent, despite progress in technology. That Mitchell and others have had such great success in resurrecting the truth has made some institutions of the state more wary. Prison documents that used to be handed out routinely are now heavily redacted, he said. The costs of obtaining public documents can run into thousands of dollars. The public is still being stonewalled even in a time that should be promising greater access and transparency.

We are seeing that in the COVID-19 era as well, as some states, including Florida and Georgia, have been accused of misrepresenting case and death data. With a lack of data transparency, how will we know what has happened and how to deal with it in the future? How can disparities be accurately tracked and fixed?

“Without facts democracy can’t function,” Mitchell said. “If facts no longer matter we’re in trouble. … Without truth, you don’t have justice.”