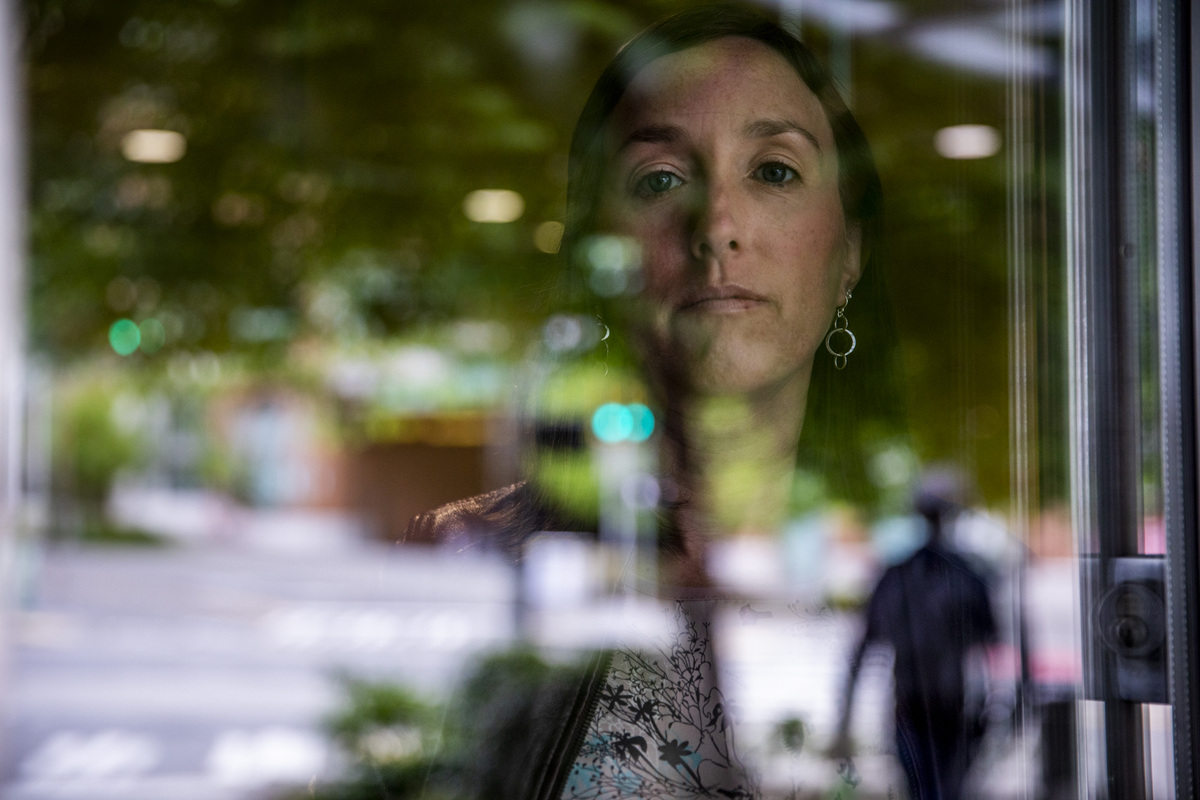 Rebecca Houghton, a domestic violence survivor, is now a board member of LifeWire, a Bellevue organization working with domestic abuse survivors. As the “Stay Home, Stay Healthy” order continues, advocates like Houghton worry about folks stuck inside with their abusers. (Dorothy Edwards/Crosscut)

As the lockdown connected to the COVID-19 pandemic drags on, domestic violence advocates are increasingly concerned about women, children and the elderly stuck at home with their abusers.

The Seattle Police Department reported an increase of 21% from February to March in 911 calls related to domestic abuse. And last week, Gov. Jay Inslee announced he was extending his stay-at-home order through the end of May. That means another month of danger for victims of domestic violence, and advocates say the coronavirus environment has introduced some newer, more twisted forms of abuse.

Abusers have threatened to infect others with the coronavirus and denied them medical care. Advocates say abusers may also withhold necessary items, such as hand sanitizers or masks.

“It’s already bad what survivors go through,” said Riddhi Mukhopadhyay, director of the Sexual Violence Law Center in Seattle, “and then to find this new way.”

The legal definition of domestic abuse includes stalking and the threat or act of physical violence, including assault, sexual or otherwise, and molestation. But experts say domestic abuse at its core is a pattern of power and control over another person, whether that be physical, emotional or financial.

About a decade ago, Rebecca Houghton found herself pinning her husband between the bathroom door and wall after he had attempted to strangle her.

Houghton said she managed to grab her phone and call her sister-in-law for help. But the 44-year-old project manager at Microsoft didn’t leave the abusive relationship for four more years.

“He was a real piece of work,” Houghton said in a recent phone interview, noting that like other abusers, her former husband could be disarmingly charming. “I laugh about it now, but it’s a defense mechanism.”

Houghton is now a board member of LifeWire, an organization in Bellevue that serves domestic abuse survivors. She is concerned that the economic impact of COVID-19 could jeopardize women’s ability to leave abusive relationships, especially those who, like Houghton at the beginning of her marriage, no longer have a way of supporting themselves.

“Once he had me in that position, things got really bad, really fast,” Houghton said of her initial inability to find a job after moving from England to America. That's a situation a lot of survivors find themselves in right now.

It takes an average of seven times for people to leave their abusers, Houghton added. Expecting them to leave in the midst of the coronavirus pandemic and a quickly developing economic downturn is disingenuous, she said.

“It’s been really frustrating for me to watch it play out,”  she said. “I don’t know what the answer is, but it really shows the lack of understanding.”

Not all those who work closely with abuse victims are reporting an increase in calls for help. Experts believe that’s because the stay-at-home order gives many victims few opportunities to seek aid privately, leaving survivors scrambling to try to reach advocacy groups at odd hours. Some advocates fear a flood of calls once the restrictions are lifted.

When victims can reach out for help, some advocates have noticed the calls are more intense. Annie Ramirez, director of development at the Domestic Abuse Women's Network, or DAWN, a nonprofit that serves survivors in south King County, said, for example, that sometimes the abuser can be heard shouting in the background. There’s nowhere for the abuser to go, Ramirez said, and “people are just exploding.”

Advocates say even those who report to work during the pandemic are more exposed, with fewer colleagues to witness harassment and other forms of abuse.

Financial abusers also have more opportunities right now, especially if the abuser has become the only breadwinner. Nyn Grey of the DOVE Project on Vashon Island said some elders find themselves stranded on the island with their abusive caregivers. They have little knowledge of how to use chat groups and no access to libraries, which they could previously turn to for help in navigating the internet.

In some instances, survivors have even returned to their abusers during the pandemic, preferring that situation to living on the streets.

“Everyone is in crisis mode,” said Wendi Lindquist, a spokesperson for LifeWire. Lindquist said the organization has gone from filing three to four protection orders a week to approximately 12.

With schools closed, children could also be increasingly exposed to abuse at home, either as witnesses or by experiencing abuse themselves.

Mary Ellen Stone, executive director of the King County Sexual Assault Resource Center, said she and others are concerned that fewer people are reporting child abuse, potentially because teachers and other trusted adults who might typically flag suspicious behavior are no longer seeing students in person.

“We’re going to assume, unless we know otherwise, that abuse, for the most part, is continuing,” Stone said. She said people could turn to drinking and drugs during this stressful time, which has the potential to add to family instability and increase the likelihood that someone in the household might reoffend.

As the potential for abuse has grown, opportunities for help have also shifted. In King County, survivors can now apply online for protection orders, which are available to individuals even in the absence of formal criminal charges. Experts say it’s important survivors have a safety plan in place when filing for such orders because seeking protection can provoke abusers.

David Martin, a prosecuting attorney in King County’s domestic violence unit, called that a silver lining to the coronavirus pandemic.

“I think that should have happened years ago because it’s really difficult, especially for marginalized people, to take time out of their day to come to the courthouse to sit here for many hours to go through a process that they should be able to do online,” he said, adding that his office has also seen an increase in reports of domestic violence incidents that would qualify as a felony.

LegalAtoms, a 2-year-old company started by former Seattle tech employees, has partnered with King County to offer this new online protection order service. Police are required to notify alleged abusers of the protection order. A court hearing, where a judge hears from both sides, is then conducted on the phone.

Mir Tariq, formerly of Microsoft and Amazon, helped start LegalAtoms. Tariq said he's seen a fourfold increase in website traffic since the beginning of the year.

Deirdre Bowen, a professor at the Seattle University School of Law, has launched a volunteer program in which law students and community lawyers help abuse victims file protection orders online and with other legal matters.

As for other ways to help, advocates are urging the public to check in with family and friends.

Houghton, who didn’t leave her ex-husband until her father’s death from cancer led her to see a therapist, is encouraging survivors not to wait to seek help.

“The only way to take the power away from the abusers is to talk about it,” Houghton said. “If you’re thinking, ‘Is this normal?,’ then the answer is probably not.”

Washington State Coalition Against Domestic Violence Friends & Family Guide – tips and tools for reaching out and staying connected to someone who may be experiencing abuse at home.