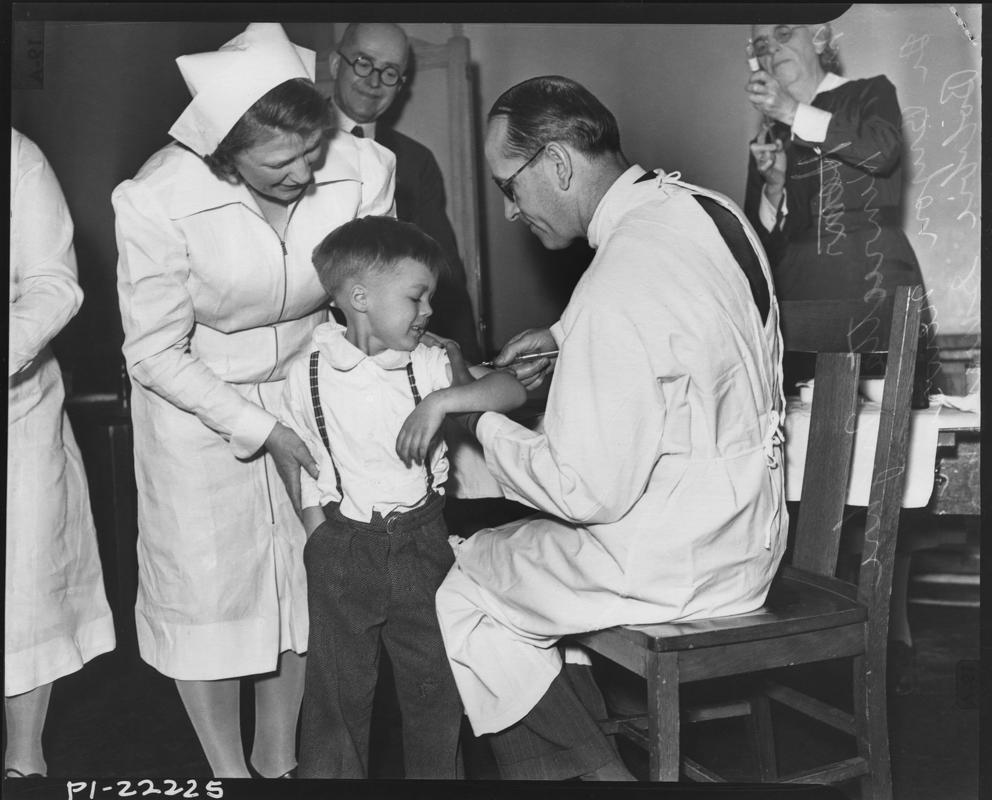 Bobbie Swanson receives a diphtheria vaccination from Dr. Bryan Newsom and nurse Henrietta Myhre, who were visiting kindergarten children at West Woodland School in Seattle in 1940 to administer immunizations. (MOHAI)

Public health took a battering in the wake of the Spanish flu pandemic and World War I. Stretching back to the early 19th century, there had been skepticism about government interference in the “private” health of citizens. But a new cynicism took hold after the 1918 flu, the greatest public health crisis in modern history, killed as many as 100 million people.

Historian Nancy Rockafellar, writing about the flu pandemic in a 1986 Pacific Northwest Quarterly article, “In Gauze We Trust,” looked at public attitudes following the epidemic. The public, she wrote, “resisted ‘regulative zeal’ on the part of public health officials.” Science had not understood influenza enough to prevent catastrophic losses. As a result, “The devastating epidemic had seriously dimmed postwar optimism and faith in the application of progressive medical science.” Despite scientific advances and a greater medical community commitment to public health, the concept and actual well-being of society “suffered a stunning defeat in the immediate aftermath of World War I,” she concluded.

Read the rest of Knute Berger's ongoing series on the impacts of the 1918 flu in the Pacific Northwest.

Selling public health in the early 20th century had been an uphill struggle the more it was applied. Some people resisted any interference in their lives, even in the name of public health. In 1911, Dr. Eugene Porter, New York’s state health commissioner, succinctly articulated the challenge of trying to overcome public resistance to changing behavior in order to stop preventable diseases: “Blocking our way stand the troops of selfishness and ignorance. These are always the twin foes of progress.”

To that end, Washington’s public health officials worked to gain support for their work even before the pandemic. Typhoid, diphtheria, scarlet fever, measles, smallpox — all demanded attention, as did water quality and sanitation. State inspectors traveled Washington to track down the sources of disease, test milk, inspect logging camps and test samples in a state laboratory designed for the purpose. In the war years, venereal or “social” diseases had become rampant. Tuberculosis was an ongoing problem. Both VD and TB were often treated by segregating patients from the rest of society.

Both World War I-era state health commissioners, Dr. Thomas D. Tuttle of Seattle and his successor, Dr. John B. Anderson of Spokane, had battled the flu pandemic and both likened the financing of the state’s public health efforts to war. In a typescript report on public health to Washington Gov. Louis F. Hart in 1920, Anderson wrote, “Our citizens are willing to be taxed for protection against an armed foe who would invade our homes and openly destroy life and property, but it is very difficult for me to comprehend why people are unwilling to pay relatively small sums for doing those things that will save from death many who might perish from microscopic enemies.” Anderson recommended that the state buy and provide a diphtheria antitoxin free to the public. As it was, it was free only  to the poor and cheap for the rich, but unaffordable to the vast middle.

Anticipating the rough circumstances for selling public health to the Legislature and citizens around the state, Tuttle used his 1915-1916 Biennial State Health Report to compose what amounted to a public health manifesto arguing for funding, acceptance and education. He invoked thinkers such as author and critic John Ruskin and philosopher Herbert Spencer to bolster his case.

First, Tuttle identified the enemy by quoting from Spencer a passage popular among public health advocates in the late 19th century: “Ignorant men may sneer at the pretentions of sanitary science; weak and timorous men may hesitate to commit themselves to its principles, so large is their affliction; selfish men may shrink from the labor of change, which its recognition must entail; and wicked men may turn indifferently from considering that which concerns the health and happiness of millions of their fellow creatures. …” Spencer went on to say that public health work was the essence of Christian behavior.

Having set the battle lines between modern medicine and the ignorant, timid and wicked, Tuttle then argued for economic pragmatism. “In preventable diseases we have for reflection a condition of urgent economic importance. They are destructive to efficient manpower; are unnecessary and can be restrained, and possibly entirely suppressed.” Lack of health, in other words, was bad for business.

Even so, selling the idea was not going to be easy. “Our efforts at control will meet with opposition — opposed on the ground that we are restraining the individual from exercising his right of liberty,” Tuttle wrote. He dismissed such arguments: “Any claim to vested rights to liberty which disregards the neighbor’s vested rights to liberty is properly catalogued as despotic selfishness.” In other words, your mask or quarantine or vaccination protects the liberty of the whole community. “Don’t Tread on Me” doesn’t give one the right to tread on others by exposing them to disease.

Tuttle also argued that there was a larger, more long-lasting obligation. He leaned on biblical notions to support his case that public health is pro-life: “We are willingly taxing ourselves for every commodity in daily use that the war burden may not fall upon the babes of the next, or the next and yet the next generation! This is proof of the working of a sub-conscious law of fair play which avouches the right of the unconceived child to be represented before the bar of equity concerning economic measures. I contend that the unborn child has the same right to be protected from sociological, environmental and disease producing conditions. A ‘true bill’ or indictment would lie against any forbears who neglected to hand down a heritage of good health, and it is well to remember that the sins of the fathers are visited upon the children even unto the third and fourth generation.” Tuttle saw public health as protecting the rights of people yet to come, a similar argument made today by environmentalists regarding climate change.

Despite his articulate passion, Tuttle was fired from his job in early 1919 after steering the state through the worst of the Spanish flu pandemic. The trigger was politics — defiant Olympia and Thurston County doctors who opposed further shutdowns — and he left the state shortly after. His successor, Anderson, who was the chief health officer and physician in Spokane before and during the flu epidemic, was appointed as Tuttle’s replacement. Faced with writing his first state-of-the-state health report in early 1920, Anderson lifted nearly all of Tuttle’s manifesto with a few additional paragraphs of his own to make his argument for a bigger budget, better pay for health commission staff, and more funding to sell the idea of public health to the general public.

Anderson also picked up Tuttle’s notion of responsibility to the future, as newspapers of the time noted that he gave lectures on the “Responsibility to Posterity” to various civic and health groups around the state. But by 1921 he too was fired, the health commission reorganized, and its budget, at least temporarily, reduced. When asked by the Spokesman-Review about leaving the job, the paper reported Anderson “would not discuss the change in the management of state health affairs beyond expressing the belief that politics has nothing to offer a professional man.” Anderson also left the state for work, it was reported, with the U.S. Public Health Service.

This brings to mind a quote attributed to John Ruskin that both Tuttle and Anderson included in their reports, which perhaps reflects the frustration public health officials felt in the face of opposition: “Any regulations which tend to improve the health of the masses are viewed by them as an unwarranted interference with their vested rights in inevitable disease and death.”

The quote, used in arguments promoting public health at the turn of the century, was sometimes said to be meant cynically or sarcastically. Yet, by invoking it, Washington’s public health officials were laying a moral marker for policies designed to not only help the living, but to fulfill a duty to the coming generations — even if many of their fellow citizens in the present resist treatment.