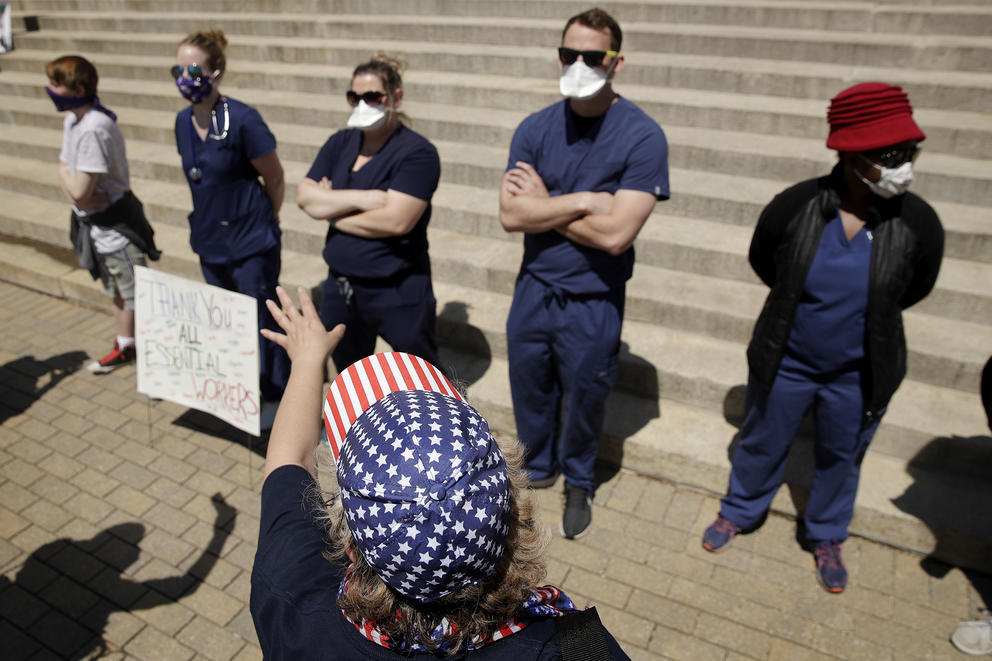 A protester, foreground, yells at counterprotesting nurses during a rally April 23, 2020, at the Kansas Statehouse in Topeka to protest stay-at-home orders put into place because of the COVID-19 pandemic. Several hundred people gathered to protest the restrictions and urge the reopening of businesses closed to slow the spread of the coronavirus . (Charlie Riedel/AP)

When Laurie Jones heard that a COVID-19-positive person had left isolation, her staff at Okanogan County Public Health reached out to see what they could do.

“We did notify them and say, ‘You know what, if you need anything, let us know,’” said Jones, the administrator of the north central Washington health department. “’If not, you need to stay isolated so that you protect others from getting COVID.’”

As word of their intervention spread on social media, however, it was recast into a threat. The rumor became that the public health officials had ordered the person into house arrest, which was not the case.

In short order, someone posted Jones’ home address online. There was talk of going after her and her staff. Some even suggested they bring guns.

That night and for several nights afterward, Jones couldn’t fall asleep. Already a light sleeper, she would hear her neighbor’s dog bark and bolt out of bed to check that her tires hadn’t been slashed.

She ordered herself security cameras — a first — but they were slow to arrive. Meanwhile, local police were calling her, offering to patrol her home. It turned out they had seen the same threats and more.

“When other people started calling me, asking me if I was OK, I was kind of like, ‘OK, what's going on?’ ” she said.

Jones is far from the only public health worker in Washington state feeling threatened right now. Bone tired from months of work and working with a fraction of the staff they had a decade ago, many say they are also experiencing an increase in harassing messages and, sometimes, outright threats.

In Kittitas County, just east of Snoqualmie Pass, where officials are still working to contain an outbreak at a food processing facility, residents spoke about surrounding the county public health offices and not letting staff out, according to public information officer Kasey Knutson. Others demanded personal information of the public health workers.

“It raises the stress level,” said Barry Kling, administrator of the Chelan-Douglas Health District, just to the north, who said he’s seen a swell of abusive messages. “And we’re all stressed already.”

In lieu of a vaccine, closely tracking the spread of the coronavirus is what will allow Washington state to relax the social distancing measures currently in place, health experts say. Adequate testing, combined with disease tracing and isolation of those who’ve been exposed, should “box in” the virus, allowing the rest of the population to enjoy something more closely resembling normal life.

Polling, as well as anecdotes from local health officers, suggest the vast majority of people support such actions. Likewise, most Washingtonians say they support social distancing measures to slow the spread of the virus.

But while those who view the longstanding public health practices as intrusive or in violation of their civil liberties may be in the minority, even a single threat or harassing message can add to the already considerable pressure of trying to contain a pandemic.

“Anything that’s taking our time away from COVID-19 is impeding our response,” said Knutson of Kittitas County Public Health. “And it’s definitely taken some time.”

More reporting on local health jurisdictions: Coronavirus has no borders, but your county’s health funding does

The term “contact tracing” didn’t become normalized until the 1930s, said Graham Mooney, associate professor at the Institute of the History of Medicine at Johns Hopkins University. But the practice of tracing infectious diseases dates back much further.

“It goes back to the Old Testament and the Bible,” said Jeff Ketchel, executive director of the Washington State Public Health Association. “This has been around for thousands of years. If someone’s got a contagious disease, you’ve got to separate them from other people.”

As Washington scales up its contact tracing efforts officials have sought to emphasize that the practice is not only old, but common.

“They think this is a new word and it's not,” said Jones, the Okanogan County Public Health administrator. “We've been doing contact tracing for every disease that we have. For example, if we get a report that somebody has salmonella, we contact them, we ask ‘What have you eaten? Write down everything you ate last week. Where have you eaten? Who else in the household ate?’ That's how they get recalls on food products, by doing tracing.”

But Johns Hopkins' Mooney said it doesn’t surprise him to hear of threats to public health officials. Uprisings against health interventions are easily found throughout history.

In the mid-1800s, so-called “cholera riots” popped up across the world, often accompanied by threats against physicians and hospital workers.

In Milwaukee in the late 1800s, mobs of people threatened to kill the lead public health authority who pushed for vaccination against smallpox.

At its root is how the interventions can be perceived as invasive — and have sometimes disproportionally targeted poor and marginalized communities, said Mooney. “People are always worried about what happens with information,” he said.

In a phone call with reporters recently, David Postman, chief of staff to Gov. Jay Inslee, said the large majority of Washingtonians are likely to be cooperative with contact tracing, “because it’s their health and they want to know if they might be put in danger.” Most residents in the state have also abided by stay-home orders.

But Postman also acknowledged hearing scattered reports of threats, including from some current elected officials like state Rep. Matt Shea. “It’s unfortunate that some people have tried to stir this up and make the threats and exaggerate the whole nature of this effort to make it look like something violative and frightening when it’s anything but,” he said.

Kling, of Chelan-Douglas Public Health, said public health workers from around the state mentioned on a recent conference call that there’s been an uptick in abusive calls, a lot of them based in anger at the ongoing social distancing measures. He personally hasn’t faced any of the direct threats as Jones has, but said more people are leaving messages, calling him a “son of a bitch.”

“We have call-in lines where people can ask questions and register complaints, and my staff are saying the level of concern and anger and hostility is really increasing, and I think it’s going to get worse before it gets better,” he said. “A lot of it is frustration; they feel like the government’s orders are unfair.”

"I think a lot of the pressure and anti-public health sentiment is stemming from unclear or misinformation, a distrust of government, lack of understanding or respect for actual health officials and political parties leveraging the pandemic as the economy's health vs. public health," Brynn Brady, lobbyist for the Washington State Association of Local Public Health Officials, said in an email.

Jones, who’s 64 and speaks with a slightly hoarse voice over the phone, is no left-wing sycophant. She questions the wisdom of some of Inslee’s stay-at-home orders — such as why some small businesses must close while Wal-Mart remains open — and has a son in law enforcement.

But as a longtime public health worker, she believes in the science of containing infectious disease.

“This isn't a government plot to take away your civil liberties,” said Jones. “This is what public health does on a day-to-day basis, whether it's gonorrhea, hep A or salmonella.”

In Washington, local jurisdictions — usually based on county — have the final authority on public health. Since the 2008 recession, many of the departments have seen steep cuts and staff reduced. Most workers are exhausted.

And as they’ve been working, many health officers have seen tremendous support from the community, with people thanking them, despite the frustrations of living in a shut society.

“Most people still realize we need to take it a step at a time,” said Kling. “But some of the fringe folks are not at all in that space.”