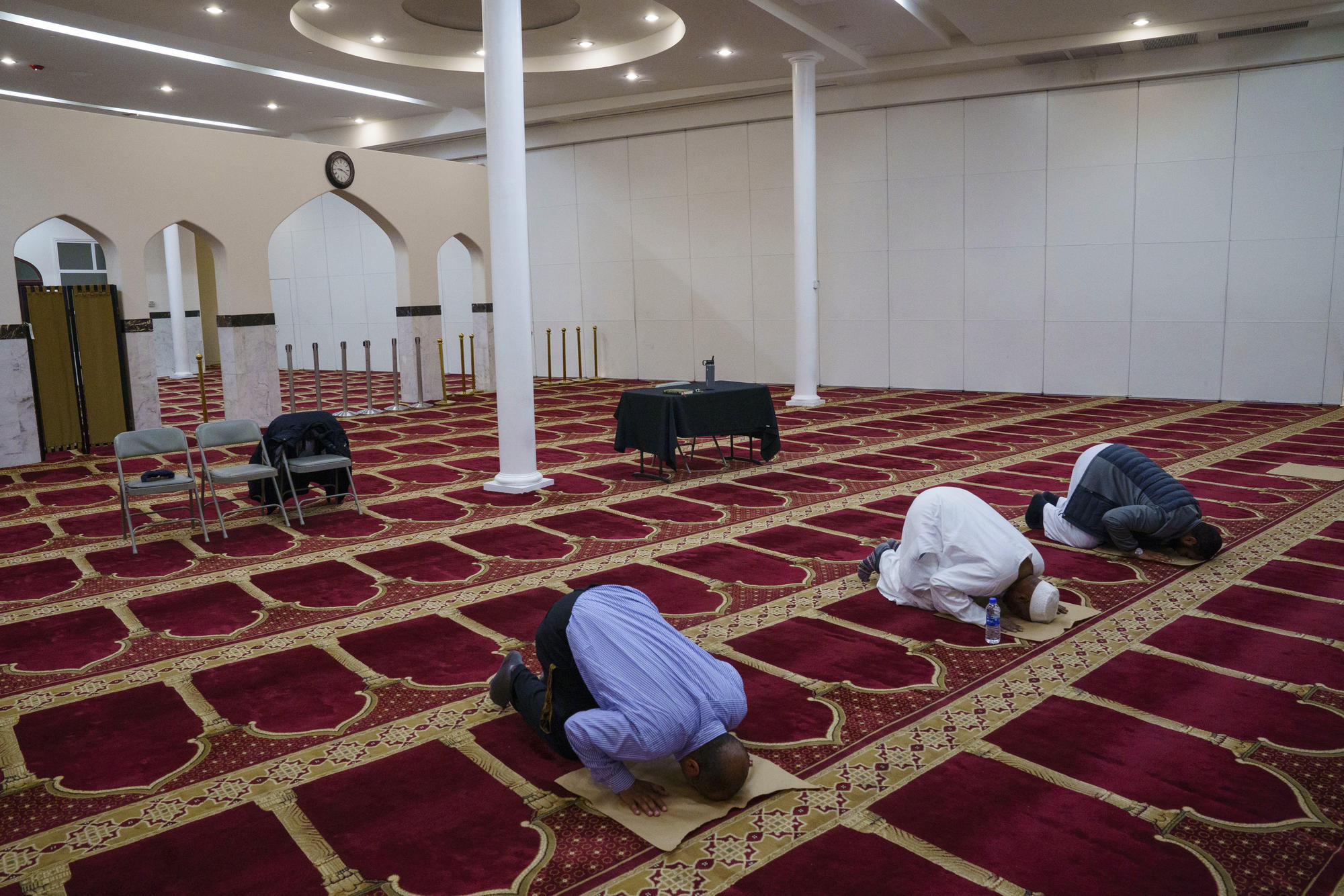 Sulieman Abdulkeni, left, Mahjoub Mohamed, center, and Hassan Wado livestream an evening service for Ramadan on Tues., May 5, 2020 at the Muslim Association of Puget Sound in Redmond, Wash. The mosque is closed due to COVID-19 and would typically host celebrations for Ramadan with upwards of 1,000 people. (Sarah Hoffman/Crosscut)

Rehan Bashar misses the night prayers most of all.

As he and his fellow Muslims observe the holy month of Ramadan under the shadow of a pandemic, the 53-year-old dentist from Sammamish is thinking about taraweeh, the additional night prayers for which mosques around the world stay open late during the holiday.

“You tend to participate more in a group setting,” Bashar said. “At home, I feel very lazy. The energy Ramadan usually gives us is not there.”

Widely known as the annual month of fasting in Islam, Ramadan is a time of increased prayer and reflection that teaches empathy and solidarity with the less fortunate. Celebrated in the ninth month of the Islamic lunar calendar, it falls in a different 30-day period each year, ending around May 23 this year.

The holiday is also about community, but the typical congregating and connecting were disrupted this year by the coronavirus outbreak, and the subsequent order to stay home and distance ourselves from others.

Like so many of the month’s typical traditions, the nightly mosque gatherings for taraweeh are not simply about piety, Bashar said. People come for Quran readings and group prayers, but “in simpler terms," he said. “It’s when we hang out.”

Podcast: Keeping faith during a pandemic

“[Ramadan] is not as exciting as it usually is,” Bashar said. “We look forward to this all year. It’s a whole month full of activities and energy, and we don’t have that energy.”

The pandemic may be stifling people’s ability to physically come together, but it is energizing some to fulfill one of the main pillars of Ramadan: giving back. From South Seattle to Redmond and beyond, COVID-19 has threatened countless people and families with economic devastation.

The local Muslim community is endeavoring to answer that need for help.

‘Exactly what our faith teaches’

The Muslim Association of Puget Sound (MAPS) suspended its weekly jummah prayers in mid-March because of the coronavirus. But the largest Islamic center in Washington mobilized to help those losing income even before pausing the prayers, which can draw 800 to 1,000 people on a regular Friday.

In the early days of the outbreak, the Puget Sound’s coronavirus epicenter was east of Lake Washington, and the Redmond-based organization was spurred to help its immediate community.

“We already had MCRC, our Muslim Community Resource Center, that does so much,” said Aneelah Afzali, executive director of the MAPS American Muslim Empowerment Network. “With COVID-19, we increased our investment in those services. There was a need and we responded.”

MCRC has taken a multifaceted approach to helping with whatever people may need right now, including rent, groceries, medical supplies and wellness checks for the elderly and those living alone. Initially providing hot meals, financial help and refugee assistance, the resource center became part of MAPS in 2015 as its humanitarian arm, explained Nikhath Sheriff, who founded MCRC in 2010. Comprehensive services now include a volunteer medical clinic, legal clinic, a senior program complete with a book club and knitting group, and a recently opened single women’s shelter.

“When the pandemic hit, we saw lots of calls for rent help and utility bills,” Sheriff said. “For the first few weeks we spent about $100,000 just to make sure people weren’t getting evicted or entering homelessness.”

Since those early days, MCRC has launched a program to distribute food boxes to families in need. To replace what would normally be a community dinner at the mosque, the center is offering a drive-thru pickup at MAPS every evening for iftar, the first meal of the day, eaten after sunset during Ramadan. Thanks to donations from local restaurants in Bellevue and Redmond, lunches are also available during the day on Tuesdays and Thursdays for anyone who is hungry, not just Muslims. Beyond food, the volunteer medical clinic has helped deliver 5,000 face masks to nearby health centers.

“Our response has been exactly what our faith teaches: service,” MAPS's Afzali said.

As of late April, about 800 families had received some type of assistance from MAPS and MCRC since the pandemic began. They’re hoping to do more, but may run into a funding problem: Ramadan is when MAPS usually collects about 80% of its operational budget from donations, according to Afzali, but that is during normal times. Many typical donors are affected by COVID-19 this year, hurting their ability to give. At the same time MAPS is receiving less income, the organization is increasing services to meet the community’s need. Unable to host their annual banquet fundraiser, MAPS organizers hope virtual fundraising will help them keep going.

“Ramadan is ultimately about our relationship with God and what we’re doing to service others,” Afzali said. “In some ways, [the pandemic has] reemphasized the importance of the month.”

‘We have so many clients’

Since 2015, the Somali Family Safety Task Force (SFSTF) has been doing similar community work in South Seattle, with services ranging from computer classes to youth programs, guided by community decisions about what kinds of support are most needed.

“I don’t want to make that decision,” said Farhiya Mohamed, founder and executive director. “I want to give the community the freedom to do what they like.”

The task force’s latest effort was Mohamed’s idea, though. As COVID-19 began spreading and jobs disappeared, she knew people would need help getting food, especially families whose children could no longer rely on schools for some meals.

Every Friday since the middle of March, Mohamed has delivered food baskets to families in the Rainier Valley area, with occasional help from her husband or the SFSTF staff. The food, provided by the Rainier Valley Food Bank, includes veggies, fruits, eggs, flour and other ingredients important for the many festive treats traditionally whipped up during Ramadan.

How does Mohamed know who needs help?

“I know all the families,” she said. “Elderly, single mothers, those without cars or enough income. I’ve been in the community as a social worker for a long time.”

The plan is to continue giving baskets each week beyond Ramadan, and multiple baskets for families who need it. Right now the focus is on the Rainier Valley, but SFSTF hopes to expand efforts to areas like West Seattle. The only limitation is funding, and the task force, like MAPS and other religious organizations in the region, will miss out on some of it without the ability to host events. Mohamed hopes online donations can keep the food box deliveries flowing.

“I hope we can keep going,” Mohamed said. “We have so many clients.”

To help out as best as he can, Bashar, the Sammamish dentist, has been volunteering his dental services at the MCRC medical clinic. It has brought back some of that energy that Ramadan has been missing for him, but he’s been thinking about Eid.

The end of Ramadan is marked by Eid Al-Fitr, which brings people together to pray, celebrate and reflect on the end of fasting. For children, it’s comparable to Christmas, as parents and loved ones typically hand out gifts, sweets and new clothes. Of course, Eid will look different this year, too, when Muslims celebrate on the weekend of May 23.

“It is going to be very devastating,” Bashar said. “It’s one of our biggest holidays. The kids will definitely miss it.”

With help from the Seattle Foundation, both SFSTF and MAPS are hoping to provide some sense of normalcy and festivity to the local Muslim community. SFSTF will have food, gifts and candy for families to pick up at a drive-thru, and MAPS will have prayers led virtually and a drive-thru celebration.

The final 10 days of Ramadan leading up to Eid are some of the most spiritual, and the typical attendance at MAPS reflects that. The mosque is packed 24 hours a day during this “profound and powerful time” in a normal year, Afzali said, and extra night prayers are often added when the place runs out of room. Eid also serves as a kind of homecoming for many, as Jews and Christians experience during their spring holidays of Passover and Easter; even those who don’t typically attend mosque services will make an appearance to celebrate and catch up with everyone else.

“Most of us come from a place where we’ve left our families behind, and the only family is the people around us — the community,” MRCR founder Sheriff said. 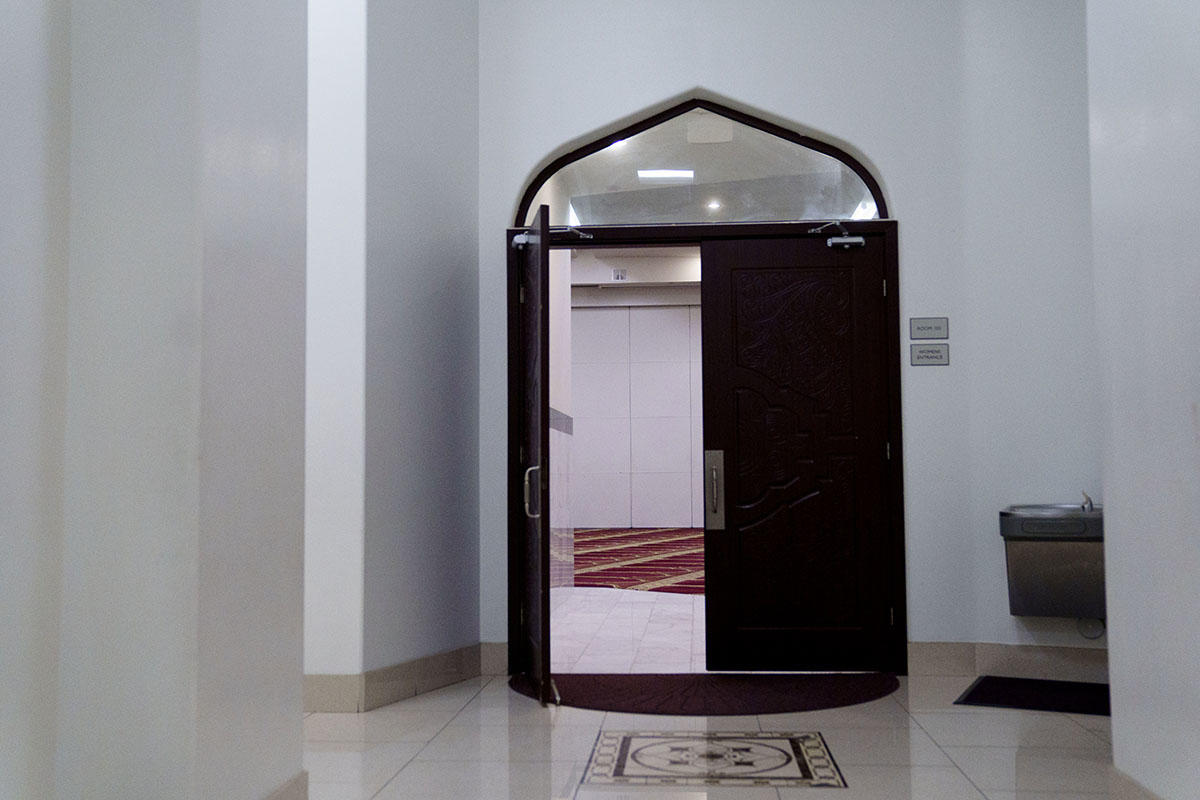 An evening service for Ramadan is livestreamed on Tues., May 5, 2020 at the Muslim Association of Puget Sound in Redmond, Wash. The mosque is closed due to COVID-19 and would typically host celebrations for Ramadan with upwards of 1,000 people. (Sarah Hoffman/Crosscut)

An evening service for Ramadan is livestreamed on Tues., May 5, 2020 at the Muslim Association of Puget Sound in Redmond, Wash. The mosque is closed due to COVID-19 and would typically host celebrations for Ramadan with upwards of 1,000 people. (Sarah Hoffman/Crosscut)