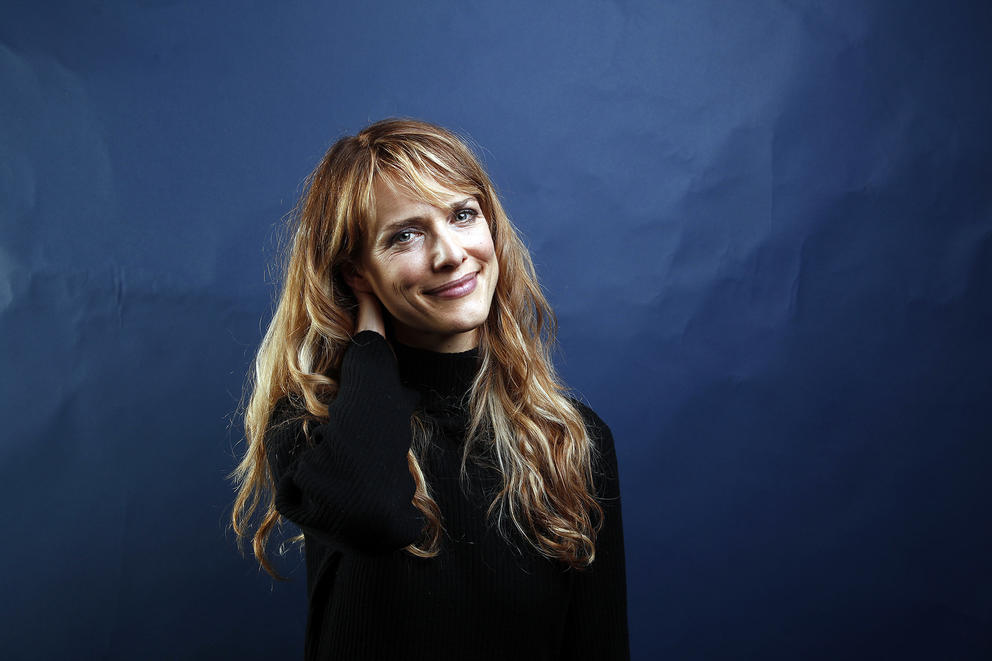 We Go Way Back was the first Lynn Shelton film I ever saw, in October 2005. I knew nothing about it, though I had started to hear buzz that the filmmaker, a local, might be someone to watch. My friend and fellow arts booster Nancy Guppy had invited me to an advance screening at the Northwest Film Forum. “I think you would appreciate it,” she wrote.

She was right. And so began 15 years of covering Lynn’s movies as an arts journalist, and watching her become a towering influence in Northwest filmmaking. I also came to know her as a friend.

As has been widely reported, both in the news and through a cascade of mournful social media messages, Lynn died suddenly this past Friday from an undiagnosed blood disorder. She was 54.

The first of her eight feature films — seven of which were filmed in and around Seattle — We Go Way Back is a quiet, impressionistic film built on subtle human interactions with varying degrees of awkwardness. She wrote and directed the film (she did so for every feature except Laggies, written by Andrea Seigel), and as in all her work, the drifting sadness is balanced with moments of great humor and connection. The main character, Kate (Amber Hubert), is a 23-year-old aspiring actress who is making bad choices, or rather, allowing other people to make choices for her. Kate becomes haunted by a box of letters written by her optimistic 13-year-old self (Maggie Brown), which were intended to be opened on each of her birthdays.

I loved the way Lynn captured the sense of a split self that emerges when we encounter a younger version of ourselves in photos, diaries or video. And the way that person is still somewhere inside us, even though we can’t quite get back to that state of being. “If you ever get sad, remember that I was thinking about you once,” younger Kate writes to her elder. “But I guess I can’t anymore, because now I’m you.”

After the screening, Nancy introduced me to Lynn, who was radiant with excitement and a smile that could power a remote village. I was a bit starstruck. A few months later, We Go Way Back competed against 11 others at Slamdance, the hyper-indie showcase at the Sundance Film Festival. It won the Grand Jury Award for Best Narrative Feature and Best Cinematography (by her longtime collaborator, Ben Kasulke).

I pitched a story on the budding filmmaker to The Seattle Times, where I was writing arts and entertainment stories as a freelancer. In February 2006, I emailed Lynn: “You might not remember meeting me but … I’d like to write a profile of you and your film for the paper.” She wrote back right away, saying she was “honored and grateful!” We arranged to meet at her house, which ended up being just a couple blocks away from mine in the Phinney-Greenwood neighborhood. I walked over, excited and nervous.

Lynn was laid-back, funny and a little shy when talking about herself. Raised in Seattle, she had attended Garfield High School and the University of Washington School of Drama before a stint in New York, where she completed her MFA at the School of Visual Arts and started working in video. She revealed that while she had made a couple short documentary films, she hadn’t made a foray into feature filmmaking until her late 30s. At this point she was 40, and I was 37, and the idea that I, too, might suddenly take off on a new creative path was thrilling.

As a journalist, I was supposed to keep a professional distance from my subjects. But like most people who have had a conversation with Lynn, I wanted to hurl myself into her orbit.

The article, “A Happy Ending for an Existential Crisis,” came out just ahead of the 2006 Seattle International Film Festival. We Go Way Back screened at the festival — as did all of her films, eventually, including Your Sister’s Sister (2011), the first-ever local film to open SIFF, and Sword of Trust, which kicked off the festival last year. In the story I wrote, Lynn explains the genesis of her first film. “For a time, I romanticized my 13th year,” she says. “Looking back, I thought it was my peak creative year. I know I’m idealizing, but I felt I was creatively explosive at that age, plus I had confidence.” She contrasted that with the self-esteem nosedive she experienced in her 20s. But by 40, she was embarking on a swift creative ascent.

Just as we can glimpse our future selves in a childhood photo, We Go Way Back holds the formative DNA for Lynn’s later films. There’s the pathos and humor of awkward interactions (see her breakout film, Humpday). The crisis point, after a character gets themselves into an impossible situation (see Touchy Feely). The naturalistic dialogue (often the result of improvising, common in all her films). The sweeps of quiet.

And the emphasis on the Northwest landscape, a rainbow made entirely of greens — the damp pavement, the dark logs upholstered in bright moss, the wet pant legs, the tall trees as sanctuary. It’s there in the Okanogan County setting for My Effortless Brilliance (2008), and the San Juan Island backdrop of Your Sister’s Sister, and the drip-drip fernscape of Outside In (2017), filmed in Snohomish County. She loved the Northwest and often said, “Seattle’s in my blood and bones.”

Lynn worked hard to ensure film productions stayed in Washington, despite the state’s comparatively paltry film incentive program. She was a fierce supporter of her local crews, members of which, over and over on social media in recent days, have emphasized her incredible kindness on set. “Since I had the pleasure of working on a set with my dear friend Lynn Shelton in 2009,” producer Jennifer Roth wrote on Facebook, “I have always treated my colleagues, my crew and everyone around me differently. She taught me that being a true professional is to lead with love, trust and respect.”

I was never on set with Lynn. Nor did I ever get to witness her sheer joy in karaoke, lauded by so many, but I loved knowing that even as her career was taking off, she remained so grounded and could still be a goofball. I covered her new movies, in features, blogs and blurbs. We emailed back and forth for various reasons — she gave me contact info for up-and-coming female filmmakers. I connected her with my friends who had an Airbnb in Los Angeles when she needed a place to stay while filming a Mad Men episode, her first time directing television. (Now extensive, her TV credits include Fresh Off the Boat, G.L.O.W. and, most recently, Little Fires Everywhere.)

We didn’t make plans together, specifically, but we were often at the same events, including a raucous game night at Nancy and Joe Guppy’s, where Lynn directed us through many hilarious rounds of Werewolves of Millers Hollow. She made me feel like I was a person, beyond “a press person.” She saw my other selves. One summer a couple years ago, I posted a photo on Instagram from the Oregon Coast and immediately received a text from her saying, “I’m in Manzanita too! This is Lynn! Shelton!” We arranged a quick meetup.

Later that summer, my husband, Daniel, and I had Lynn and her husband, Kevin, over for iced tea on the patio. We agreed to make it a Wednesday, but on Tuesday I got a text from Lynn saying, “totally late but almost there!” Daniel and I considered telling her she was a day early, but figured it didn’t matter. We hung out and talked. I didn’t tell her it was the wrong day until after she got home. She said she was “mortified” but also recognized the humor in the awkwardness, the humanity.

This past March, I received a text from Lynn, asking if Daniel and I would contribute something to the “Message to the City” video she was making for The Stranger, part of the series featuring local artists sharing messages of hope during the coronavirus pandemic. “I want to encourage people to sing so I’m making a singing montage,” she wrote. We would just need to record ourselves singing “a song that makes you happy,” she said, adding, “Thanks for considering, sweet friend.” I felt honored to be asked. I liked being called her friend. Soon I texted her a song, and she texted right back: a cartoon monkey face with big heart eyes.

In the end, our contribution didn’t make it into her final cut, but we had so much fun doing the clip we’ve continued to record silly “COVID covers” of songs that make us happy. I kept meaning to send Lynn a note to thank her for the inspiration, for prompting us to sing and stay creative during these strange suspended days.

On May 16, 2020, I woke up to a text from Nancy that said, “Can you call me?” She told me Lynn had died overnight. It didn’t make any sense. But she was so alive, we protested impotently. She was just getting started, we said.

A few hours later Daniel and I boarded a ferry to Bainbridge Island. We had plans for a socially distanced birthday party for my brother-in-law, our first excursion beyond city limits in three months. It was overcast and wet, the kind of Seattle weather that reveals an astonishing array of grays from sea to sky. The boat pushed across Elliott Bay and I watched driftwood loll in the silvery water, dark green woods standing sentry in the distance.

I recalled a pivotal scene in We Go Way Back, when Kate gets drunk and opens all her birthday letters — even those she is supposed to save for later years. “Dear Kate at 31… So what did you decide to do with your life? Remember that you can do anything you want to do and be anything you want to be.” “Dear Kate at 44… Are you happy? What’s it like to be grown up?” I was thinking of Lynn, at 54, and how her younger self would have been so wowed to meet her, to discover she was doing exactly what she wanted to do, on her own, kind terms. As the ferry nudged into the terminal, I remembered the young Kate’s sign off for each letter: “Bye for now.”

Where to Watch Lynn Shelton's Films

All movies also available for rental from Scarecrow Video.