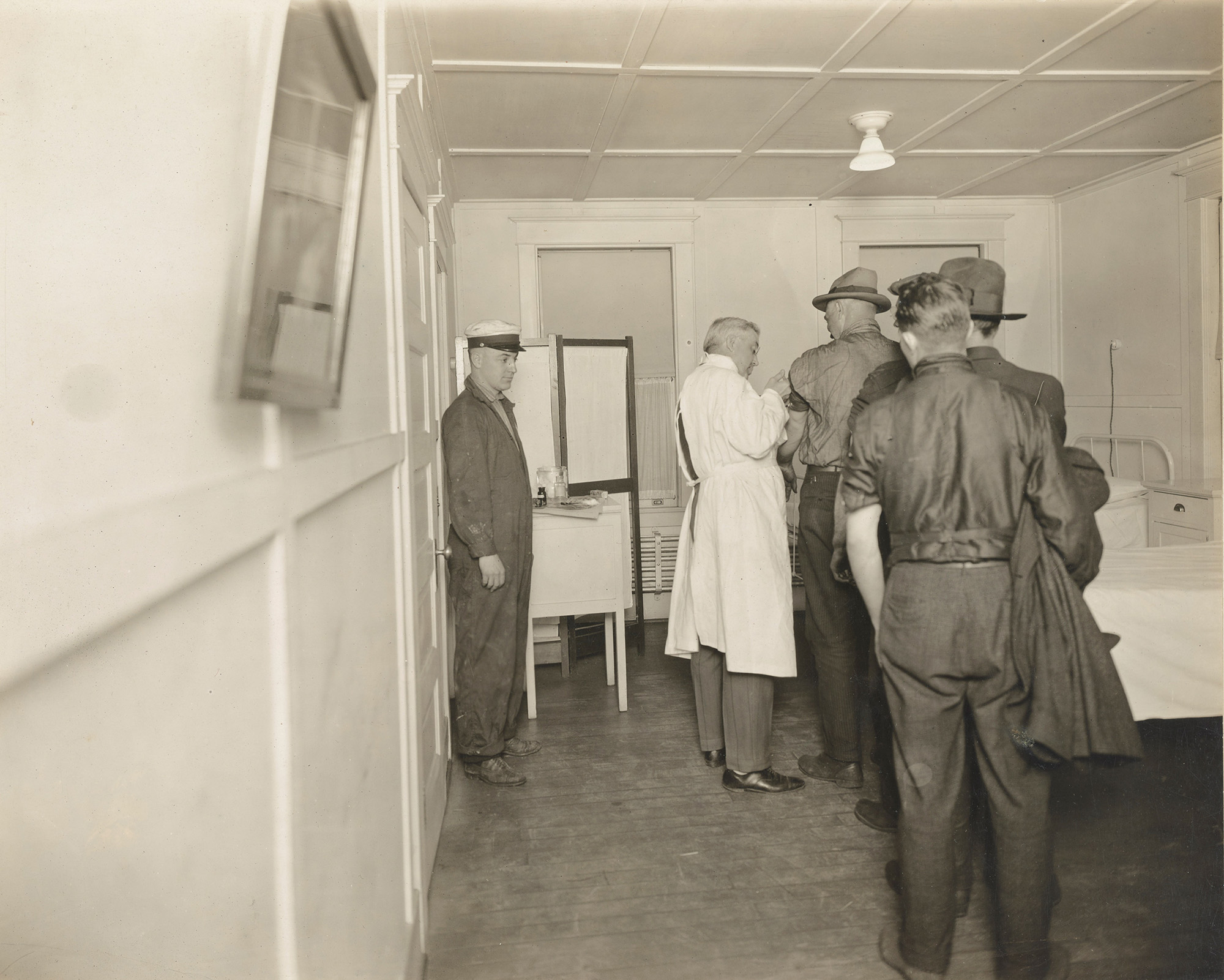 A group of Seattle men lines up to receive their influenza vaccines, circa November 1918. (The National Archives and Records Administration)

The recent suicide of an experienced New York emergency room doctor, who was treating patients with COVID-19 and contracted it herself, is a startling reminder of the toll the virus can take on mental, as well as physical, health. Trauma from the novel coronavirus, we are learning, can reverberate far beyond the respiratory consequences of the disease itself.

While researching the impact of the Spanish flu outbreak in the Pacific Northwest, I was struck reading through old newspapers — particularly in the lesser-studied late stages of the pandemic, in 1919 and 1920 — by accounts of suicides and suicide attempts that mention influenza as a possible cause or contributing factor. The people who died by suicide appear to come from all walks of life: a doctor in Portland, a livery driver in Belltown, an Olympia lumber company worker, the wife of a Seattle flu victim, an Oregon hardware salesman, an unemployed Spokane bricklayer.

Did the Spanish flu pandemic somehow cause suicides? Or was this simply a case of family members, reporters and medical experts reaching for an easy explanation for something we understand today as a much more complex phenomenon? It is hard to be conclusive, but there is evidence that the 1918-20 and immediate post-pandemic period saw an increase in suicides. In Seattle, for example, even as the population growth rate slowed after the First World War, the number of suicides increased, according to figures from the city’s public health reports. There were 55 suicides in Seattle in 1919, 73 in 1920 and 91 in 1922.

​​​​​​A 1992 study in the journal Suicide and Life-Threatening Behavior addressed this possible connection explicitly. In his article, “The Impact of Epidemic, War, Prohibition and Media on Suicide. 1910-20,” I.M. Wasserman concluded that there are indications of increased pandemic-related suicides. Interestingly, he argued that World War I might have actually reduced suicide because wars tend to unite society; suicide, he noted, tends to decline during crisis periods that result in “social integration” — or, in other words, in togetherness. Prohibition also seems to have suppressed suicide because of the relative unavailability of alcohol, a depressant that often correlates with suicide. Factoring these trends in, Wassermann pointed out that tactics used to fight the epidemic, including public measures closing schools, mandating face masks and banning large gatherings, theatergoing and church services, decreased togetherness.

“The fall in social integration during the epidemic as well as fears induced by it (a stricken person could be dead in three days) likely increased suicide,” Wassermann wrote. Still, the data is not definitive.

Early observers of influenza, including Karl Menninger in 1919, also noted that acute “psychosis” often accompanied the disease. During the pandemic and its immediate aftermath, some studies showed an increase in admissions to asylums even in countries like Norway that weren’t in the war but were hit by influenza. In 1920, America’s first suicide prevention organization, the New York-based Save-a-Life League, warned of increasing suicides worldwide in the post-armistice world. They tallied some 20,000 suicides in the U.S. in 1921, a 23% increase over 1920, according to a brief report in the Journal of the American Medical Association.

A recent article in Psychiatric Times outlined the mental health challenges of the earlier flu pandemic:

“When it comes to mental health, the historical record shows that the pandemic, like the war, took a toll on the emotional resilience of those not (or not yet) in harm’s way. The massive and sudden loss of life plunged many into a chronic state of helplessness and anxiety. A large portion of the population [was] affected by the loss of loved ones. Parents had to come to grips with losing a child (or even several children), while some children suddenly found themselves parentless. In November 1918, 31,000 children in New York City alone had lost one or both parents. For others, the experience left them feeling a mix of guilt, anger, confusion and abandonment. Surviving health professionals were not immune to such sentiments, with many of them noting that they were haunted by a sense of frustration and grief, even years later.”

The range of impacts on Northwesterners whose suicides made the newspapers and may have been connected to influenza covered a gamut of issues, including guilt, loss and depression. It should be noted that direct causes of suicide are not always known, but in this period influenza was sometimes cited as a cause in cases that match the Psychiatric Times summary.

For example, a murder-suicide in Baker, Oregon, was reported in 1920, when a man named Till Stratton shot his wife and then himself, leaving five orphaned children. “That influenza was responsible for the tragedy … is the belief of the children and the relatives of Mrs. Stratton,” the article reads. “Stratton was a victim of the disease last winter and is said to have been irrational at times ever since.”

People in the throes of the flu were sometimes said to be mentally unsettled, and it apparently caused a few to take extreme actions. The Oregon Daily Journal reported in 1919 that a woman in Portland attempted suicide by throwing herself out her bedroom window. “She had been suffering from melancholia following an attack of influenza,” the paper claimed. Two police officers who investigated the case concluded that the woman, who suffered a broken leg, jumped intentionally. She, however, insisted she fell. (At the time, suicide could carry significant social stigma; the act was illegal and survivors were sometimes charged for it.)

Also in 1919, the Idaho Recorder carried a story about a 19-year-old in Salmon, Idaho, who “took his own life … while suffering from a temporary fit of insanity. The young man suffered a severe attack of influenza and it was thought that this was the cause of his going temporarily insane.” In 1920, The Seattle Times reported that a livery man was found dead and said to have killed himself because of “worries over his nervous disorder, aggravated by a recent attack of influenza.”

According to a 1963 story in Oregon Historical Quarterly, “Spanish Flu in Oregon,” a salesman named E.R. Balsinger traveled around the state during the pandemic and remembered  a common thread of the influenza outbreak: “It seemed that some of the victims of this epidemic suffered excruciating pain in the head and they became delirious. One of my customers told me of a fine young family man who was unable to get into a hospital so they had sent a nurse to his house. The nurse left his room for a moment and in his delirium he pulled a revolver from the bureau drawer and shot himself.” Delirium, agitation and temporary insanity appear regularly in accounts of suicides across the country that were reportedly connected to influenza.

Various newspaper accounts cited the grief of spouses and caregivers who lost loved ones to the disease. A widow in Seattle killed herself shortly after her husband died at home under her care in early 1920. She left a note saying she did not want her husband to “go alone.” A farmer in Oregon grew despondent “over continued ill health of himself and his wife due to a serious attack last winter of influenza” and hanged himself in his orchard. “For several days the man cried continuously because his wife’s illness and her failure to regain normal health,” related the Morning Register in Eugene.

One of the most poignant stories starts at the very beginning of the pandemic and ends more than two years later. The Albany Daily Democrat in Oregon published an article in July 1920 about a young woman, Edyth Knox, who was “believed to have committed suicide by drowning” herself in the “Santiam Ditch,” a manmade canal. She was visiting relatives in the area, and her slippers were found on the canal’s bank. She had lost her husband, Bert Knox, to the Spanish flu in 1918. A soldier at Camp Funston, Kansas, where the outbreak is said to have begun, he was among the pandemic’s very first victims in the United States. The newspaper reported, “She is known to have been grieving over the death of her husband … and to have been in poor health that followed an attack of the influenza that she contracted while visiting her husband at the time of his illness. She was small and weighed only 80 pounds.” When her body was recovered, a few days later, she was wearing a swimming suit, which led authorities to reconsider that her death was likely accidental. Though her grief and health struggles were real enough for relatives to suspect the worst, they came to accept the “accidental” explanation.

A recent article in the highly respected British medical journal, The Lancet, argues that the 1918 pandemic and the 2003 SARS outbreak in Hong Kong offer evidence that deaths by suicide might increase because of COVID-19. The journal warns that the “mental health effects of the coronavirus … disease pandemic might be profound,” though rising suicide rates are not inevitable. It predicts that “mental health problems will be experienced by the general population and those with high levels of exposure to the illness caused by COVID-19, such as frontline health workers and those who develop the illness.” Those vulnerable to the worst mental health effects include people “with psychiatric disorders [who] might experience worsening symptoms”; others, too, may “develop new mental health problems, especially depression, anxiety and post-traumatic stress.…”

All of which suggests proactive assessments and interventions among at-risk populations are needed, and not simply for the short term. “These are unprecedented times,” says the Lancet article. “The pandemic will cause distress and leave many people vulnerable to mental health problems and suicidal behavior. Mental health consequences are likely to be present for longer and peak later than the actual pandemic. However, research evidence and the experience of national strategies provide a strong basis for suicide prevention.”

The Spanish flu and COVID-19 are different diseases, and the pandemics are occurring a century apart in very different times, with different tools at our disposal. But remembering the forgotten victims of the 1918-1920 influenza period can be a useful reminder that the impact of pandemics goes far beyond the daily tallies of the sick and dying. We should all prepare to live with the impacts of the disease for many years to come.