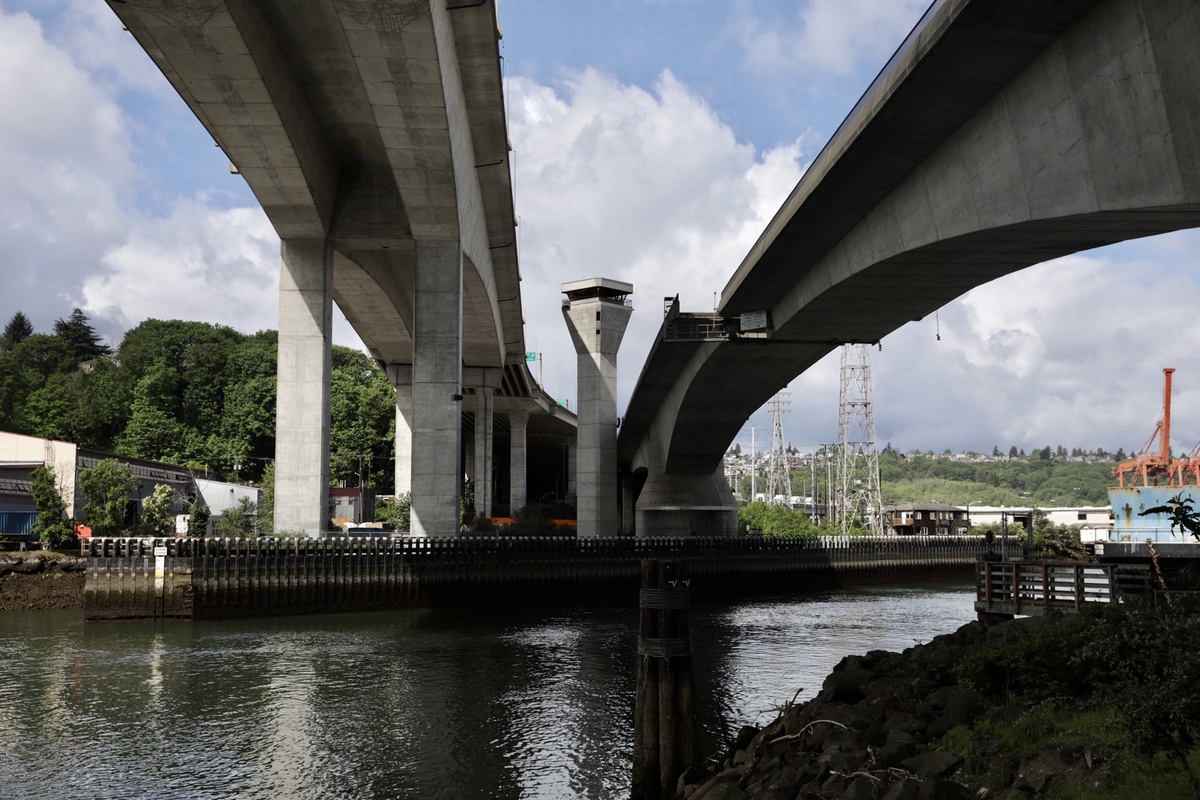 Jack Miller and his family business, Husky Deli, have been in West Seattle long before any bridge. The deli first opened in 1932, when Miller said there were still “woods at the end of the street.”

The neighborhood has grown enormously since then and Husky Deli has survived countless road closures, building teardowns and repavings, each uniquely challenging the area’s way of operating.

Change is a constant for residents of West Seattle. The people who live and work on Seattle’s peninsula to the west face a new predicament now with the West Seattle Bridge’s closure because of cracks in its infrastructure, which were publicly disclosed the same week as Gov. Jay Inslee’s stay-at-home order.

Miller was in high school in 1978, when a freighter collision caused a six-year closure of that period's West Seattle Bridge. That accident led to the opening of the current bridge in 1984. For a while, his family dropped Miller off an hour early for school because they knew that the heavier traffic would keep him from being on time if they left home any later.

When Miller looks at the community’s predicament now, he sees the need for similar adaptations, but at a different scale.

“We had to [adapt] back in the ’70s and we did, and we’ll have to again,” he said. “The difference is now there’s twice as many cars than there were back then.”

The bridge’s sudden closure has sparked anger and concern among some West Seattleites and businesses that have relied on it. Many businesses are preparing for the impacts, which they expect will be more acutely felt once the coronavirus stay-at-home order is lifted. West Seattle’s population has doubled since 1978 to about 80,000, largely because the bridge allowed easier access to an area that had once been more isolated from the rest of the city. While the city of Seattle recently identified a contractor to make the first phase of bridge repairs, the closure is expected to last at least through 2021.

Dan Austin, a West Seattle Chamber of Commerce board member and neighborhood restaurant owner, said it’s hard to separate the impact of the governor’s stay-at-home order from losing the bridge. Normal traffic hasn’t yet resumed, and it’s hard to tell what might change once the order is lifted. But he worries that once it is, visitors and neighborhood residents, even those who’ve lived through the last bridge closure, will have a whole new reality waiting for them.

“Some businesses have gone through this before, but this will be at least twice as bad,” Austin said.

Without a bridge, a new reality

Austin was bartending at his restaurant, Peel & Press, when he first heard news of the bridge’s closure. He quickly turned on the TV news and watched customers react in real time as they heard the announcement.

“It was an absolute shock,” he said.

Getting supplies for his restaurant will become more difficult, he said, with much of it coming out of a warehouse in South Seattle. The journey to the warehouse and back is already longer now and, once traffic resumes, he’s worried that the trip will become unmanageable.

“If we can survive, it makes it harder to survive,” he said. “It cuts into your time to operate your business.”

And Austin worries: What will the bridge’s closure mean for commuting customers? Will some decide to eat at home or near their workplaces rather than take a long drive to a neighborhood restaurant? He has already seen changes in patterns when past construction projects impacted the neighborhood, like the widening of the South Spokane Street Viaduct a decade ago or the teardown of the Alaskan Way Viaduct last year.

“The other ones weren’t fun,” he said. “But now we’ve lost the whole arterial in and out of here.”

Julie Mierzwiak, owner of Realfine Coffee, originally chose the location of her West Seattle business because of its proximity to the bridge. Already, the drive time from her home in West Seattle to her other location, on Capitol Hill, has doubled. She worries what might happen when her businesses reopen.

“It was mostly commuters before,” she said. “That was our main customer base.”

In short, these changes will require extra planning for some businesses to survive. For some, adaptations made under the stay-at-home order will be a testing ground for procedures to keep once it’s lifted.

Lora Radford, executive director of the West Seattle Junction Association, said that while she can’t say exactly what will happen once the order is lifted, she suspects fewer visitors will come to the neighborhood and perhaps more West Seattle residents will work from home.

“We know it’s going to be for the long term, and we’re expecting at least two years,” Radford said of the bridge closure.

For Lisa Myers, owner of the furniture and gift shop Capers, that’s meant more focus on delivery and online ordering. She has run Capers since 1985 on West Seattle’s business-packed California Avenue. Most of her customers are from West Seattle, so she’s not entirely concerned about losing her core clientele to the bridge closure. Still, the governor’s stay-at-home order made it impossible for customers to buy furniture at the store, so she’s taken on more deliveries and plans to create a catalog on her website. These changes could also help keep customers who live outside the neighborhood.

“I think that delivery is going to be a pivotal thing for us,” she said, and it might help quell the fear of traffic for customers.

Miller’s deli had primarily been a takeout business before the spread of coronavirus, so transitioning to that full-time hasn’t worried him. Even though many customers are locals as well, Miller has paid more attention to what can be done online. With the help of his kids, he’s started using social media more frequently to promote his deli. He’s advertising “survival bags,” a promotion in which customers can buy food in packages.

No end in sight

“With COVID, we see a little bit of the end — not with social distancing, but with the stay-at-home order at least,” Montoure said. “But with the bridge, there’s so much uncertainty.”

Already, Montoure knows that the business he ran will not be the same post-COVID. The bridge closure has only added to his concerns, especially without knowing a concrete plan for fixing or replacing it.

Austin said the millions it would cost to repair or replace the bridge are concerning, especially because of the city’s current budget deficit. He and other members of the West Seattle Chamber of Commerce are working to pull together a group of neighborhood leaders and community groups to work through the issue and encourage others to share their business impacts with the Seattle Department of Transportation.

“If there’s no fix, then that’s an expensive bridge on the tab, and then where’s that money coming from?” he said,

Some community members have been disappointed with the city of Seattle’s communication regarding the bridge’s closure and plans for it. Kevin Broveleit, co-owner of West Seattle Realty, is rallying residents as West Seattle Bridge Now to convey community needs and ensure that the issue stays urgent for the city council amid coronavirus concerns. Urgency alone is something that Broveleit said the city council is lacking, especially as he sees the bridge closure having longer-term impacts for West Seattle than coronavirus.

“Without the stay-at-home order, it would be absolutely crazy over here in West Seattle and the impacts would be profound,” he said. “We need to stay relevant in the conversation.”

Some speculate that the bridge’s closure might eventually drive out residents who recently moved to the neighborhood and are renting. But some business owners, like Realfine Coffee's Mierzwiak, say customer patterns might change to their benefit as people continue working remotely — like Amazon employees, who’ve been given the option to continue working at home until at least October. That might mean more local business and foot traffic. Mierzwiak is considering adding a walk-up window to her third coffee shop location, which she had planned to open in West Seattle in a few months.

West Seattle Junction Association's Radford said she wants to encourage workers who will continue to do their job remotely to lean more intentionally on businesses within West Seattle.

“We’re deepening that and really digging into those close community connections,” she said. “There’s always been a sense of community, but [now] it just looks different.”