Why Crosscut is reminding readers about the 1918 flu

The last great pandemic hit the Pacific Northwest a century ago. It should inform how we think about the coronavirus. 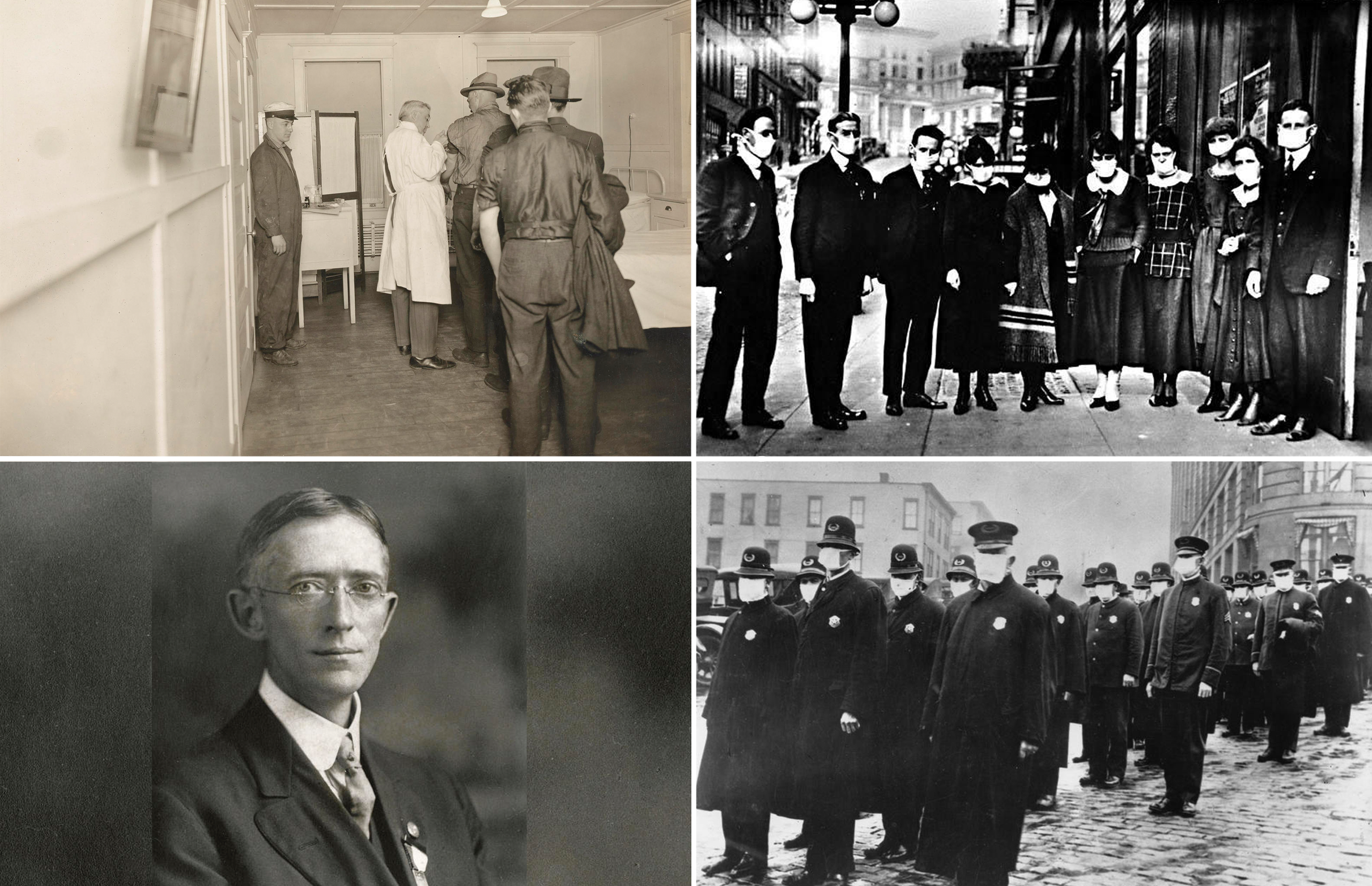 Crosscut's Knute Berger has revisited the 1918 flu pandemic's impacts on Puget Sound from the onset of the outbreak, locals' attitudes on isolation, the voices of cautionary reason and the aftermath to compare it to today's coronavirus epidemic. (Clockwise from top left: National Photo Archives and Records Administration, University of Washington Libraries, Special Collections, SOC0394, Culver Pictures via Washington State Archives and Montana Historical Society)

It is often said that journalism chronicles the first draft of history, and this is true. But it can also surface forgotten memories, the first first drafts, to help inform the perplexing present.

Since January, when the coronavirus arrived in the Pacific Northwest, Crosscut has attempted to bring the past to bear on our current crisis. In a series exploring the Spanish flu, Crosscut’s editor-at-large, Knute “Skip” Berger, reminds readers that the world’s last great pandemic hit the booming Puget Sound region in the fall of 1918. Then riding a wave of wartime production, Seattle was brought to its knees by the virus. It killed between 1,400 and 1,600 people in just two years; across the state, nearly 6,000 lives were lost to the flu.

Seattle’s experience with the 1918 pandemic is reminiscent, in many ways, of our current fight against COVID-19. To contain the outbreak, officials shut society down. The public grumbled then, as now, about restrictions on personal freedom. Masks were mandated on public transit. As cases spiked in the Seattle area, health care was rationed. The Washington state health commissioner, Dr. T.D. Tuddle, tried valiantly to relay to the public the best information science could offer, but uncertainty was rampant. “The character of the disease,” Tuttle wrote, “is that we are in the dark, to a large extent, as to a means that will prevent its spread.” Soon, however, social isolation seemed to slow the forward march of the virus. But when those measures were relaxed, and a restless public came together for the holidays, a second wave hit.

Relying on family records, historical archives and contemporary histories of the Spanish flu, Berger’s series on the 1918 pandemic is an exercise in reconstructing public memory. Many will read these stories as offering lessons; others will note the ways in which the past rhymes with the present; still others will shake their head at our tendency toward folly. The historical record shows that all of this is true — what’s important is that we remember. If the many notes Berger has received from readers in response to his series are any indication, the act of remembering triggers more memories, not just from politicians and doctors, but also from ordinary people whose modest lives were irrevocably changed by an epochal moment.

The flu subsided in 1920, but it continued to wreak havoc in the years that followed. Newspaper reports from the period suggest that people in Seattle struggled with suicide in the late stages of the pandemic. At least one study argued that social isolation, along with the grief of losing loved ones to the virus, may explain the soul-crushing angst that pervaded the society. As the coronavirus continues to claim lives across the globe, a similar angst is with us now. It is worth noticing this suffering and committing it to memory, so that we may share with future generations what it was like to live through history.

This story was first published in Crosscut's Weekly newsletter. Want to hear more from editors like Mason Bryan? Sign up for the newsletter, below.