While some businesses are asking for armed help, others say they want none of it. Residents, police and city officials are also feeling the tension. 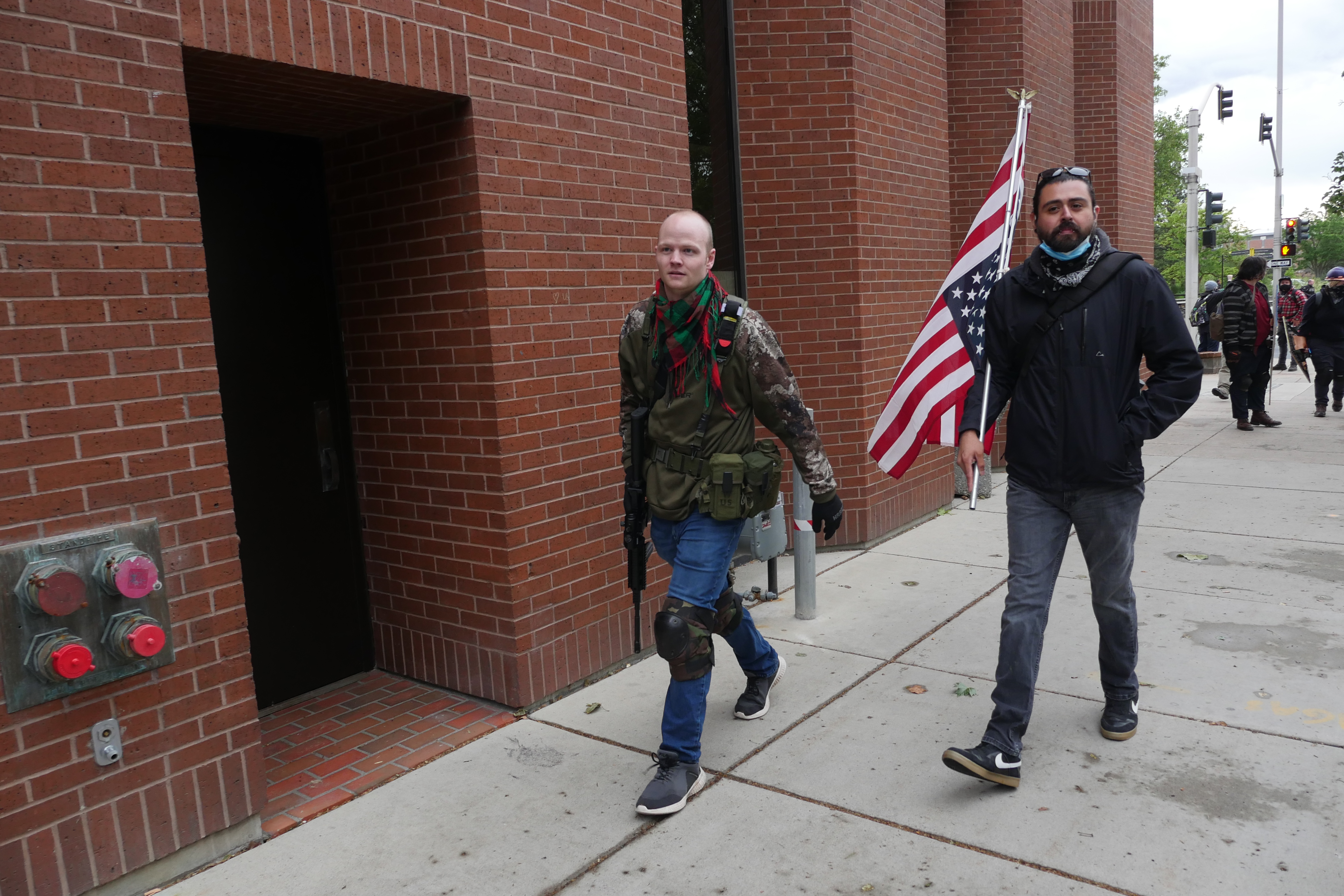 A man who wished to remain anonymous carries his AR-15 during the anti-racism protest on June 7, 2020, in Spokane. He said he realized that some people were "scared and I get it. But I mean, to some point, we have to look past our feeling and say, is this safe?" (Emily McCarty/Crosscut)

The First Amendment has been meeting the Second Amendment at some anti-racism protests across Washington state.

Some people feel threatened by the armed presence, but those openly carrying semi-automatic rifles say the U.S. Constitution also gives them a right to be there and to express their opinions.

The issue has created some unusual alliances and unexpected conflicts: While some businesses are asking for protection, others are clashing with gun owners. Protesters and police aren’t always sure exactly where they fit into the debate.

Bradley Lindsey, a 30-year-old living in Bellevue who was recently laid off from his aerospace machinist job, came armed with an AR-15 to a Kirkland jewelry store at the request of his friend, the owner. He joined others who also armed themselves in front of nearby businesses during a protest on May 31.

Lindsey said he interacted with many people who were happy he was there, and met only one person who was upset that he was holding a weapon in the middle of this upscale suburban business district. He wasn’t there to intimidate, but the definition of that word depends on your point of view, Lindsey acknowledged.

“If I walk down the street, and I see someone armed, I don't feel intimidated. I look at that and see people showing their Second Amendment rights, defending their property, defending other people's property, who don't want to have their livelihood destroyed,” Lindsey said. “Other people can go and be like, that's intimidation. Well, I mean, you could say the same thing with protesters.”

Almost the exact opposite happened 85 miles to the north about a week later. The owner of a Bellingham coffee shop posted on social media that “weapons of the military have no place on the streets of America. FULL STOP. They exist for a single purpose and that is to wage war. As a veteran who carried these weapons in a combat zone I believe they do not belong in Downtown. Their presence does not make us safer.”

But the Bellingham police reminded residents on its Facebook page that "no violations of Washington state laws occurred. Citizens are able to possess and carry weapons based on the Second Amendment and there are very few laws which limit that right, meaning there are constitutional limitations to curtailing this activity.”

Maj. Gen. Bret Daugherty, Adjutant General of the Washington Army and Air National Guard, serves as the Homeland Security adviser to the governor. At a June 1 press conference, he sent a different message saying that people should not bring guns to the protests because it increases the risk of accidental shootings.

“The police have got the weapons … they’re the right people to have the weapons,” Daugherty said. “Everybody just calm down. Leave your weapons at home.”

In Spokane, city officials, including the mayor, city council president and a state senator, released a statement condemning the armed groups that came to a large June 7 protest. “Their presence did not contribute positively in any way to the protests,” they said. “In fact, their presence made the situation more tense and our city more dangerous for all involved.”

These statements aren’t stopping those eager to uphold what they see as their inherent Second Amendment rights.

At the June 7 protests in Spokane, a man with an AR-15 walked around downtown alone except for his unarmed friend, who carried an upside down American flag. He didn’t want to provide his name or any identifying information, but said he was an Army vet and he chose the AR-15 because it’s the “most efficient.”

He wasn’t there to protect any specific businesses, he said, but was “patrolling” and “herding” people for their safety.

“I mean, I know I look scary,” he said. “[But] what's the difference between a normal guy carrying a gun and the police officers carrying a gun?”

The increased presence of armed individuals and groups at protests are just part of a broader trend the Giffords Law Center to Prevent Gun Violence has seen in what it calls “gun sanctuary” movements, said Hannah Friedman, a litigation attorney at the national public interest law center.

The zenith of the trend was early this year in Virginia, Friedman said, when the newly Democratic Legislature was poised to pass several gun safety laws and thousands of gun rights activists protested. But the presence of semi-automatic guns at a protest, like the commonly seen AR-15, is less about the Second Amendment and more about the message it communicates, Friedman said.

“[They’re] more about what the firearm has represented over history as a symbol of white supremacy, and as a symbol of white power and the threat of violence over nonwhite people in public spaces,” Friedman said. “That is the message they're sending to the rest of the country. It's a reminder of this country's history. It's a reminder of this country's racialized violence that really has nothing to do with anyone's lives, except for the people whose lives they're endangering by bringing these very dangerous weapons into public spaces.”

Washington courts have determined even the right to bear arms is not absolute and is subject to reasonable regulation by the state. The Washington state Supreme Court, in City of Seattle v. Montana, noted that “the constitutional text indicates the right is secured not because arms are valued per se, but only to ensure self-defense or defense of state.” Supreme Court Justice Scalia agreed, saying Second Amendment rights are not unlimited.

What is illegal? You cannot display a gun or any weapon capable of bodily harm in a way that appears to intimidate or "warrants alarm" for the safety of others, at the risk of a gross misdemeanor. The only exceptions are law enforcement and military, assisting in an arrest for a felony, acting in self-defense or defense of another, or if in one's own home or business.

Theo Dennis, 31, of Everett, believes that arming himself brings protection, not intimidation, to the Black Lives Matter protesters.

“I think I get as a white person, there's an assumption that I'm probably Republican, I'm probably a Trump voter,” Dennis said. “I'm probably, you know, against the movement trying to protect the police and the businesses, which isn't really reality.”

He heard from police scanners that Proud Boys, self described “western chauvinists” who have an “anti-political correctness” and “anti-white guilt” agenda according to the Southern Poverty Law Center, might be coming down, Dennis said, and with previous lootings and fires set in the city, he wanted to provide a sense of security for those marching for Black lives.

“I talked to a couple friends and said, hey, let’s go down there and show some protection for these folks and try to get some of them just courage to be out there,” Dennis said. “I think that worked because we had a lot of people thanking us and saying, hey, we just really appreciate that you’re on our side. It makes us feel like we can actually be out here, and we’re not gonna have people coming up and trying to hurt us and try and shoot us.”

Dennis said he thinks an armed presence makes it less likely for police to use violence, as well. Protesters were mostly positive that he carried a weapon, he said, and he had only one confrontational interaction, which was mostly a respectful conversation of agreeing to disagree.

And as to when and if he’d fire his weapon, it would have to be under “pretty extreme” circumstances, such as when someone else shoots first, Dennis said, and it would be a last resort.