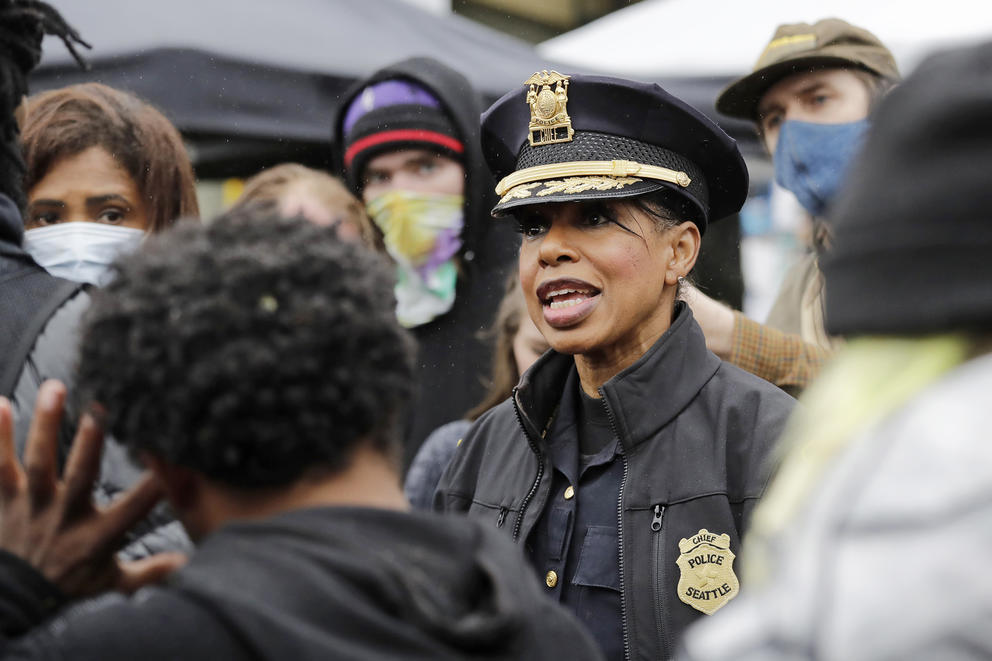 Seattle Police Chief Carmen Best talks with activists near a plywood-covered and closed Seattle Police Department precinct in Seattle's Capitol Hill neighborhood, June 9, 2020, following protests over the death of George Floyd, a black man who was killed while in police custody in Minneapolis. (Elaine Thompson/AP)

In a dramatic break from weeks of criticism of the Seattle Police Department, Black clergy and community leaders spoke in defense of Chief Carmen Best on Sunday, sending a clear message that neither Mayor Jenny Durkan nor city council members should consider calling for the resignation of the embattled police chief.

“We know that Black women in leadership have a hard time. And sometimes people like to crush them,” said the Rev. Harriett Walden of Mothers for Police Accountability at the gathering at Goodwill Missionary Baptist Church. “And I'm here to tell you, I would never let anybody, a white woman or anybody in power, crush a Black woman in front of me.”

Black clergy and community leaders expressed their unwavering support for Best and dismissed any calls for her resignation. They condemned violent protests, but voiced support for more police accountability and shared concerns about racism in policing. They expressed doubts about the community of protesters living on Capitol Hill. And they blamed Durkan for the uncertain future of the East Precinct.

Bishop Reggie Witherspoon, pastor at Mount Calvary Christian Center, compared any calls for Best’s resignation to the biblical story of the stoning of a woman caught in adultery.

“We want to let everyone know who is calling for her resignation — I'm going to break my English right now — it ain't going to happen,” Witherspoon said.

“We want you to know that we are with you 100 percent,” Witherspoon said, addressing Best.

Over nearly 30 years in Seattle, Best has held a range of positions with the police department, including patrol supervisor, watch commander, operations lieutenant and public information officer. Her role in SPD leadership was solidified when former Chief Kathleen O’Toole elevated her to deputy chief. Their marching orders, under then-Mayor Ed Murray, were to usher the city and the department through the final stages of a federal oversight agreement meant to curb racial profiling and the use of excessive force.

When O’Toole left her job, shortly after Durkan took office, Best became the interim chief and the favorite to succeed her old boss. Her long tenure in and connection to Seattle, especially to parts of the Black community, seemed to make her a clear choice, as the department continued to struggle with community confidence.

But in a surprise twist, Best was initially excluded from the group of three finalists. The uproar, including from many community groups seeking to hold police accountable, was swift. In 2018, Best became SPD's first African American police chief.

At the Goodwill Missionary Baptist Church in the Central District, Witherspoon spoke to Best directly about racism and police accountability: “Our only challenge to you is that you call out the bad cops. We cannot allow racist, bigot cops to remain as they are. We're talking about police reform. I don't know how you reform racism. I don't know how you reform bigotry, but we've got to at least fix the system.”

One after another clergy approached the microphone and spoke in defense of Best, as the police chief sat quietly listening in a half-full sanctuary observing social distancing guidelines necessitated by the COVID-19 pandemic.

While all the clergy condemned police brutality, they distanced themselves from protests that had devolved into looting and destruction of property. They also said they feared the community that’s formed on Capitol Hill — which President Donald Trump has described as a radical left and anarchist takeover of the city — would take away from the main message of police brutality.

“The East Precinct belongs to us,” Mothers for Police Accountability's Walden said, recalling that Seattle’s first African American city council member, Sam Smith, had pushed for the establishment of the precinct so that officers would be more able to serve those living in the Central District. In a phone interview after the meeting at the Goodwill Missionary Baptist Church, Walden complained that many of the protesters seemed to be unaware of that history.

“There’s a lot of privilege going on right now, because if those were Black people up there camped out all like that, this would be a different story, honey,” Walden said of Capitol Hill’s mostly police-free zone now named CHOP, or Capitol Hill Organized Protest. “I mean, George Floyd has gotten lost in this.”

“This is what happens all the time with a movement. It gets co-opted by white people for some other reason,” Walden said echoing even some younger protesters’ hesitations about the new Capitol Hill community, which came to the forefront when Councilmember Kshama Sawant and her supporters focused on taxing Amazon instead of supporting Black lives at protests.

Victoria Beach, chair of the Seattle Police Department’s African American Community Advisory Council, added that she had been booed by protesters on Capitol Hill.

“We were booed by mainly white people trying to keep us silent,” Beach said to those gathered at the church. “They cannot and will not keep us silent.”

Some of the speakers also emphasized that any blame for what might happen at the East Precinct in the future belongs solely to Durkan.

“We're not going to let our chief take the fall for removing the barriers,” Beach said of the mayor’s decision to remove the barriers separating police from protesters that had been a source of tension. “Everything that happens up there, the bloodshed or whatever, is on the mayor's hands.”

Best has been criticized for allowing police officers to use tear gas and rubber bullets against protesters, who sometimes had thrown water bottles and other items. She also received criticism over her department’s claim last week, without evidence, that protesters were extorting businesses on Capitol Hill.

Best expressed gratitude to the clergy for their support.

She said she had had “an epiphany moment” as tens of thousands of people marched in silence on Friday in a statewide protest organized by the local Black Lives Matter chapter.

She realized that this is a “pivotal moment in our history,” one that she identified with as a Black woman.

“When I came out of the womb ... I was a Black woman. When I leave this earth, I will be a Black woman,” Best told the clergy. “This is just a moment in time of a position that I have, and I want to use it for good.”

Religious leaders, and in specific Black clergy, have often played a pivotal role in civil rights movements. But the gathering at Goodwill Missionary Baptist Church laid bare the differing goals, especially among younger and older generations, regarding the future of the Seattle Police Department. Not all clergy and community members said they were in favor of defunding the police or reallocating funds for social services.

But Bishop Garry Tyson of Goodwill Missionary Baptist Church, who said he’s witnessed police pull their guns on his own children due to racial profiling, said he agreed with calls to defund the police department.

"We're tired of the overpolicing," Tyson said. “We can’t breathe.”

Tyson also said the police department had used too much force against protesters and that Best had made a mistake by allowing officers to deploy tear gas.

"Just because she's our race doesn't mean we're not holding her accountable," Tyson said. But he also added that he expects she will rise to this occasion. “If she doesn't, she's going to miss a great opportunity."

Beach, who grew up in a household frequented by police because of domestic violence, said she’s also witnessed police being overly aggressive. When called to the house to help resolve fights between her parents, police would often turn on her dad and beat him up, she recalled. Yet, unlike Tyson, Beach doesn’t support the demand to defund the Seattle police department.

“You know, I never thought that I would even be sitting in the same room with police officers. Never. If you would have said that 15 years ago, I would've said no way. I hated them,” she said.

Beach said she’s seen some progress since getting involved in the effort to reform the SPD and wants that to continue. She added that many officers had personally reached out to her to say that they had been disgusted with what Derek Chauvin, the Minneapolis police officer charged with murder, had done to Floyd.

“If my granddaughter was kidnapped or somebody in my family, I want every officer out there, I want enough officers out there to be looking for my child,” Beach said when asked why she didn’t agree with the protesters’ demand to reallocate police money for social services.

Walden, meanwhile, blamed the lack of local progress on police reform on the Seattle Police Officers Guild, the police union.

Carey Anderson of First African Methodist Episcopal Church said he still held out hope that younger and older generations, despite their differences, would come together and craft solutions to the current crisis over policing and racism.

“I do believe in an intergenerational round table,” Anderson said. “I'm hoping that there'll be a way for us to listen to one another so that we can together forge a strategy for mobilization.”