As Washington's campgrounds open, outdoor lovers are figuring out how to safely sleep under the stars. 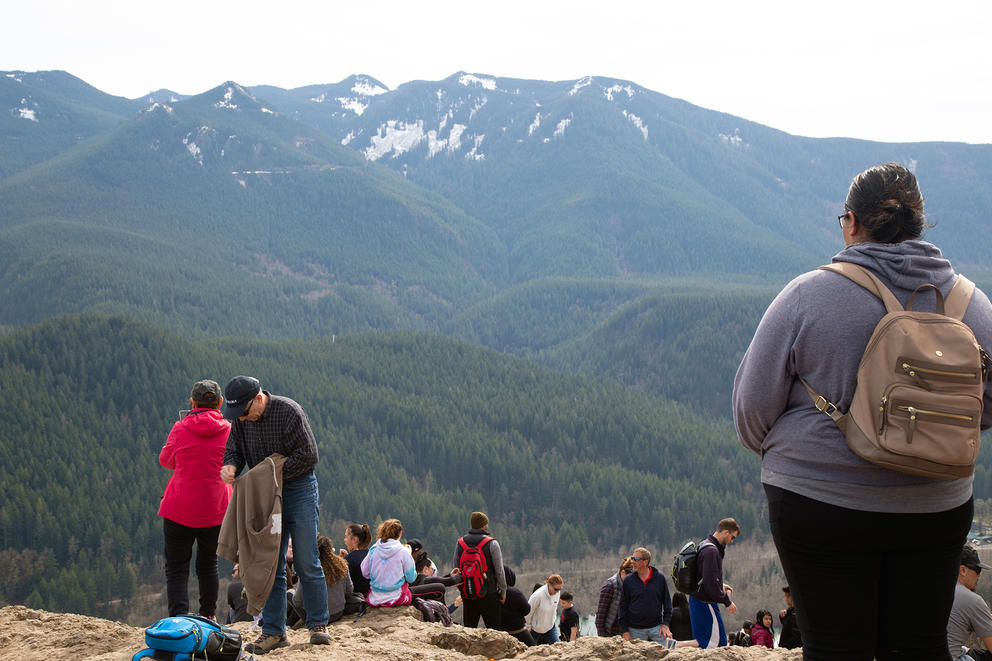 Hikers explore Rattlesnake Ledge in North Bend, WA, March 22, 2020. For months, local and state officials have urged residents to avoid recreation in the outdoors to help prevent the spread of COVID-19. As summer approaches, many campgrounds are opening for the season, and with it, some hikers fear poor social distancing and crowded trails may help the virus spread. (Jen Dev/Crosscut)

For people in the Puget Sound, persevering through dark winter months often means clinging to the idea that summer will be full of outdoor adventure. But, this year, as the coronavirus pandemic became increasingly lethal, trails closed and activities like hiking, climbing and camping ⁠— which sometimes require months or years of planning ⁠— disappeared from people’s schedules in less time than it takes to pitch a tent.

Over the past two months, however, research and expert opinion suggests that it’s harder for the coronavirus to be transmitted between people in well-ventilated, outdoor areas. Coinciding with this, some state and municipal recreation areas have reopened for public use. As of June 22, 90% of Washington Parks’ campsites, cabins and yurts are open (excluding group camps). Three parks with campgrounds are open in King County.

“We were glad to have camping reopen, but recognized that we needed to take precautions to ensure both the safety of our staff and visitors,” says Ed Girard, operations manager of the Washington State Parks and Recreation Commission, which manages the state’s 124 parks and their campgrounds. “The public seems hungry to get out and camp, [but] reopening a 124-park system across the state in nearly every county is complex. It takes time to get things up and moving again.”

With many recreational activities off limits because of the shutdown, day trips to Washington’s wild spaces exploded in popularity as alternatives. In response, a Washington-based coalition of land managers and outdoor advocacy groups called the Recreate Responsibly Coalition developed a set of ethical adventuring tenets that have since gained national support from federal agencies like the U.S. Forest Service.

But overnight camping is another beast. For Puget Sound’s outdoor enthusiasts, camping invites longer stationary periods in proximity to others, shared facilities and a greater opportunity to pass the virus between counties. As camping is allowed in more places, it can create anxiety and concern.

Molly Wilmoth of Olympia has yet to camp this summer, opting for hiking and trail running instead. She started out slightly anxious about those activities, but her confidence and comfort grew once she hit the trail and saw people mask up when passing. But with a furlough creating three-day weekends for her over the next few months, Wilmoth is planning several trips throughout the Pacific Northwest with conscientious partners. 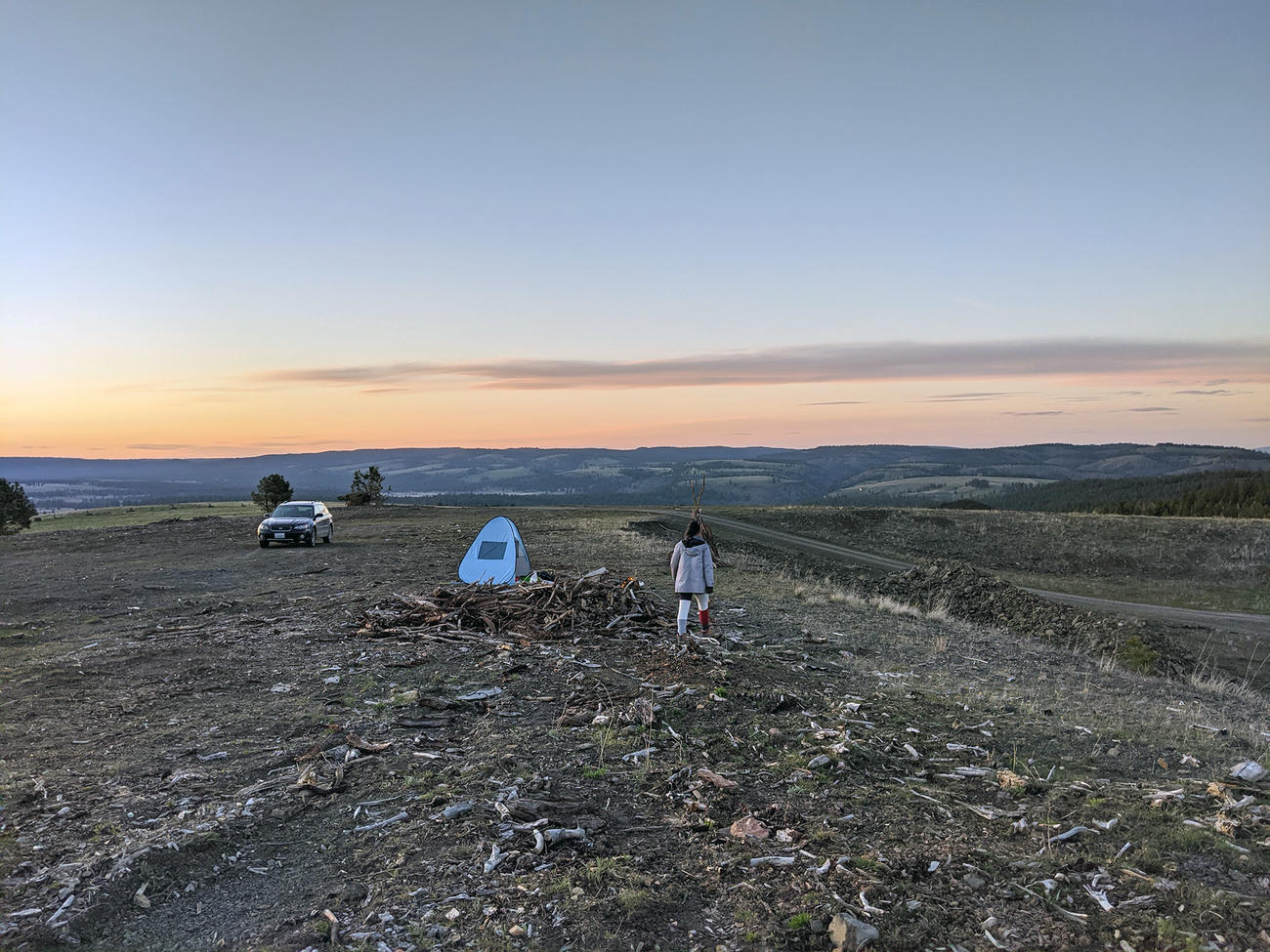 To get into nature and away from people during the pandemic, Elliot Kulakow and his wife camped at an old gravel pit in Umatilla National Forest, about 26 miles from La Grande, in late March. (Elliot Kulakow.)

To get into nature and away from people during the pandemic, Elliot Kulakow and his wife camped at an old gravel pit in Umatilla National Forest, about 26 miles from La Grande, in late March. (Elliot Kulakow.)

“[They’re] people that believe in wearing masks and making choices that help protect those who are more vulnerable to this pandemic,” she says. “I want to ensure people in other communities are safe. If infection rates continue climbing and no-contact trips seem too risky to communities or ourselves, we will stop.”

In considering ways she might camp most safely, she picked trips with minimal engagement in small towns that could be hit hard by COVID-19 ⁠— though she may stay closer to home, depending on how the virus trends in those towns.

Dr. Nandita Mani, an allergy and infectious diseases fellow with UW Medicine and self-described outdoor adventure enthusiast, says that while camping is certainly lower on the list of risky recreational activities, any social activity with individuals outside your household carries some risk of transmission. That can be compounded if people engage in other social activities throughout the week.

“I haven’t gone camping yet this summer, but I understand the urge to get outside and recreate, and I do think that it’s likely safer than other ways of vacationing, because you’re outdoors all day,” she says. “I’m planning a camping trip over July 4th with my household only.”

Before Seattleite Amy Bonaduce arrived at Vasa Resort on Lake Sammamish in Bellevue for RV camping with her husband, Danny Bonaduce (yes, that Danny Bonaduce), she was anxious for reasons beyond the pandemic. Amy hadn’t camped in 30 years, as she notes on her blog, but she was eager to get out of the house after months of social distancing. She brought plenty of towels, linens, utensils, and food. “I felt like a doomsday prepper,” she writes.

She also brought protective gear like disinfecting spray, wipes, gloves and masks. Bonaduce thoroughly wiped down the interior of her rental RV, even though she’d been assured it had been disinfected.

She soon settled into the uncrowded campground and focused on appreciating waterfront views. Her fellow campers ⁠— fewer than 10 families ⁠— kept their distance, and because the park was only open to self-sustaining campers, they didn’t have to share facilities. “I would not feel comfortable with shared bathrooms/showers or crowded beaches,” she says via email.

For Seattle nurse Emily Scott, boondocking on public land (going off-grid in a camper van or RV to avoid public campsites) with her husband has afforded her a chance to get outside, enjoy nature and disconnect from the news. But this year it brings stress, too: She watches public health agency data to make sure outbreaks are under control at home and near the campsite; and remains vigilant when she encounters potential points of coronavirus transmission, like visiting ranger stations or getting gas and groceries. She packs her own supplies and checks whether locals have been asking visitors to stay away before going anywhere. “We planned ahead and prepared for this unusual situation,” she says.

Before going on a three-night dispersed camping trip to Okanogan National Forest from June 12 to 15, Seattleite Gabe Ehlert and his camping partner did recon. They scoured maps for remote area access, and took scouting, no-contact day trips over the weekends to see what towns on the way to campsites looked like. Both Ehlert and his camping partner work at low-contact jobs, he says, so he thinks the risk of his being a vector of spreading the virus is very low. But they waited until their camp destination was in Phase 2 of the state’s reopening plan, and they’re vigilant about checking themselves for symptoms.

While camping and hiking, Ehlert and his partner passed a handful of people on roads and trails. They brought masks with them, but didn’t feel the need to wear them since they had space to physically distance themselves. A visit to Winthrop for gas was another matter. “Along the main drag through town, maybe a third of people out were wearing masks — that was not particularly confidence inspiring,” Ehlert says.“The freedom of past trips is gone.”

“I still think the ban on camping, and anti-camping propaganda, was stupid,” he says. “Closing facilities kind of makes sense, but we clearly know now there is almost no risk to socially distant outdoor activities. Closing access only makes sense for vulnerable native communities, where it may actually be possible to keep the virus at bay, which is not true of almost everywhere. Reactionary and trigger-happy locals have always been the only real threat.”

Tara Austen Weaver, a Seattle author and ex-outdoor education instructor, usually spends her summers camping. But she plans to avoid it entirely this year, even though it’s allowed in certain areas of the state. She cited concerns about how the virus is trending locally; King County’s move to Phase 2 made her only more concerned.

“I think once you start reading some of the first-person accounts of what this thing can really be like, it kind of scares you straight,” she says.

Her biggest concern about visiting a campground is the established risk of coronavirus in bathrooms, like transmission through aerosolized fecal matter during toilet flushes.

“Do I want to go and sanitize every bathroom I use? Do I want to worry?” she says. “At a certain point, it just becomes more stressful than pleasurable…. I’d actually be more inclined to go backpacking this summer than camping in a campground.”

As the virus persists and if she’s still cooped up in August, Weaver says she might have ways to get her “nature fix,” including begging friends to open up private wildland they own on the Olympic Peninsula. But she says the greater good trumps her desire.

“Everything we do has a certain level of risk, and we in the U.S. do not come from a culture of community concern,” she says. “I see a lot of people saying, 'My family is comfortable with this level of risk.' But you're not just risking your own family. You're risking other people as well ⁠— from the people who might be in the campsite next to you, to your neighbors, to medical providers.

“I love being out in the wilderness. If I have to give all of that up for this year in order to keep people safer, then I've come to peace with that.”

How to camp safely

Some of the risks of camping — even with friends — can be mitigated, according to UW Medicine infectious diseases fellow Dr. Nandita Mani. Here are some of the methods she suggests: