“If we get it and die from coronavirus fighting for people’s rights, we’re OK with that,” one protester said.

Large crowds have been banned throughout COVID-19 because of the danger of spreading the virus, however, demonstrators still chose to march in protest of the death of George Floyd and other recent victims who have died during interactions with police, feeling they needed to take on the risk and speak up for reform. (Jen Dev/Crosscut)

Anne Thayer and her husband thought long and hard about whether to attend one of the protests, considering the still very much active COVID-19 pandemic. For months, they had stayed safe at home south of Seattle. But Thayer, 49, said she felt it was important that she — a middle-aged, nonradical, white woman — show up.

“I think it was more about whether that risk was justified, considering what we were seeing clearly with our own eyes,” Thayer said referring to the video of now-former Minneapolis police officer Derek Chauvin pressing his knee into George Floyd’s neck.

“I’d rather die as a result of catching the virus this way than because I had to go back to work,” Thayer said of the protests.

She tried her best to take precautions at the demonstrations, such as wearing a mask, but social distancing became impossible when police set off flash-bang grenades and sprayed tear gas into crowds.

Thayer isn’t alone. For the past week, thousands of protesters around the country have been weighing their passion for social justice with fears related to the coronavirus, which has killed more than 100,000 people in the U.S. Even some public health officials have said that, despite the COVID-19 pandemic, these protests are too important to skip.

Crowds have been banned throughout COVID-19 because of the danger of spreading the virus. But there are other health concerns related to attending protests, such as the deleterious effect of tear gas. This is especially true for the elderly. Health officials have also warned those who are already sick should get tested and stay at home.

Some advocates have officially expressed fear around the idea of protesting during the coronavirus threat. On the Friday protests first started in Seattle, Black Lives Matter Seattle-King County released a statement that may have come as a surprise to some.

“Our board of directors was initially conflicted about whether to boost these demonstrations,” the advocacy group said in a statement. “Ultimately, we decided that the situation is too dangerous for us to encourage greater attendance at these in-person protests.”

The statement pointed out that COVID-19 had already hit communities of color particularly hard. Here in King County, Latinos now account for 40% of COVID-19 cases, even though they make up only 13% of the population. African Americans have also been disproportionately affected.

“We refuse to encourage our community members to needlessly risk their lives and their health during this time when other avenues of action are available,” the statement read.

Zawadi Chege, a 20-year-old resident of Tacoma who just finished community college, said as a former student with limited funds, she couldn’t think of other meaningful actions to participate in.

“I was really scared, and so was my mom,” Chege said of the protest she attended in Tacoma. “But I think it’s different being Black and undocumented. I didn’t feel like I had a choice.”

“Black lives being murdered by police or people who are supposed to protect us is not OK,” Chege said.

Chege layered on protection: gloves, a T-shirt turned into a makeshift mask and a bandana. Chege said her face was so covered in clothing that only her eyes were exposed. She also carried a backpack full of essentials, including hand sanitizer.

“If I was going to be arrested, that’s what I would want to be arrested for out of anything else,” Chege said of attending the protest.

Despite the apparent danger, many public health officials have encouraged participation in demonstrations during the pandemic. Infectious disease experts at the University of Washington circulated an open letter supporting the protests that ultimately drew more than 1,200 signatures. Officials have noted that standing up to police brutality means fighting an equally serious public health concern: racism.

“The actions of these police officers are unconscionable and so blatantly racist, the outrage is justified,” Patty Hayes, director of Public Health — Seattle & King County, said in a statement. “We can’t let COVID-19 distract us from our resolve.”

“Let us join together in King County and show how it is possible to break down the historical institutional racism that affects our communities every day,” Hayes said.

“Racism is a public health threat that can’t be ignored,” Washington state Health Secretary John Wiesman said in a statement. “I want our Black community members and all people of color to know that the Department of Health is standing with you in solidarity, support and love.” 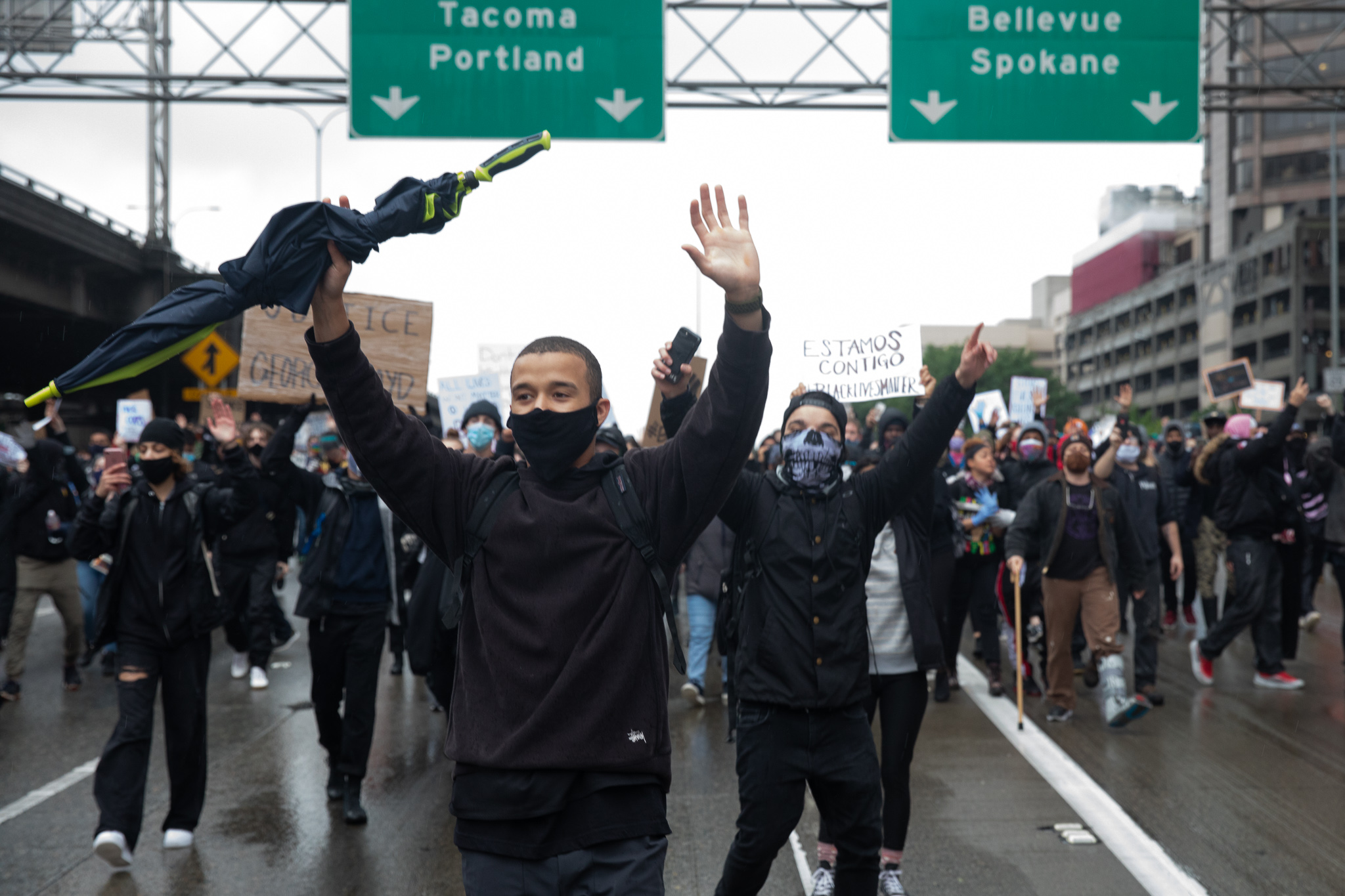 Demonstrators march along Interstate 5 during protests across downtown Seattle, May 30, 2020. A wave of protests have swept across the U.S. following the death of George Floyd. Minneapolis Police Department officer Derek Chauvin has been charged with his murder. (Matt M. McKnight/Crosscut)

Demonstrators march along Interstate 5 during protests across downtown Seattle, May 30, 2020. A wave of protests have swept across the U.S. following the death of George Floyd. Minneapolis Police Department officer Derek Chauvin has been charged with his murder. (Matt M. McKnight/Crosscut)

In a recent interview, Wiesman said it was too soon to tell whether the protests would lead to a rise in cases, but that the Department of Health is keeping an eye on the data. He added that public health officials should worry just as much about continued racial disparities in health care, such as Black babies having lower birth weights.

This doesn’t mean, however, that public officials think the large protest gatherings are completely safe. Simply that they recognize the public is making difficult choices.

“Many in our community grappled with attending protests to stand up against these injustices while also wanting to keep our community safe from further spread of COVID-19,” officials at Public Health — Seattle & King County wrote on the Public Health Insider.

Andy, a protester who is white and who identified himself only by his first name, said he, too, had concerns about the virus. Still, he went to the protest and placed his body in front of police so that African Americans and people of color would be less exposed to tear gas and other forms of possible retaliation.

“I felt it was OK because I was wearing my mask, but at that point I more or less stopped thinking about coronavirus,” he said. But when the flash-bang grenades started going off, it became “second priority to stay distant and more of a priority to just move with the group to get away from the explosions.”

“I worry I put others at risk by going,” Andy said in an email, “but I also think that showing up in solidarity, instead of just angrily tweeting, was what felt most right.”

Andy said ultimately he feared looking back at this time with regret, knowing that he didn’t “show up to demonstrate solidarity when it mattered.”

Along with concerns over injuries caused by flash-bang grenades experts, such as Sven-Eric Jordt, a professor at the Duke University School of Medicine, say the tear gas that police have deployed in Seattle and in other cities can cause chemical burns that “allow for more efficient access for the virus."

“I’m very concerned that large amounts of these aggressive chemicals are currently being used,” Jordt said.

Jordt said a 2014 military study showed the use of tear gas can cause serious enough lung damage to lead to higher rates of respiratory illnesses, such as influenza and other ailments similar to COVID-19. If someone is already sick and in a crowd, the tear gas could cause someone to cough and tear up, making the virus more likely to spread. Seattle & King County Public Health said it "opposes the use of tear gas and other respiratory irritants based on the potential risk to increase COVID-19 spread."

Another protester, who identified herself only by her first name, Tracy, said she’s been out to the protests almost every night. During the pandemic, she and her boyfriend had been following all the public health guidelines. Then Floyd died in police custody.

“If we get it and die from coronavirus fighting for people's rights, we’re OK with that,” said the 32-year-old Lynnwood resident, who works in retail. Tracy said America has allowed systemic racism to flourish for too long.

Steve Baer, 34, a software engineer who lives in downtown Seattle, said he attended the protests because he’s witnessed police brutality for decades.

“I grew up in Southern California during Rodney King,” Baer said, referring to the Black man beaten by Los Angeles police in 1991. “I’ve seen this my entire life.”

Baer said he heavily weighed the risks he was taking by joining a large crowd. He reasoned that before marching again he could self-quarantine for 14 days, since he works from home.

The moment seemed too monumental for Baer to pass up. He tries to minimize the life regrets he’ll take with him to his deathbed, and not being part of the Black Lives Matter movement now could have been one of them.

“As we reopen, regardless, people are going to personally calculate risk-based decisions,” Baer said. “It’s just if it matters enough to you.”