The governor expressed disgust over recent actions against protesters in the nation's capital, said that police actions in Washington “need to be reviewed.” 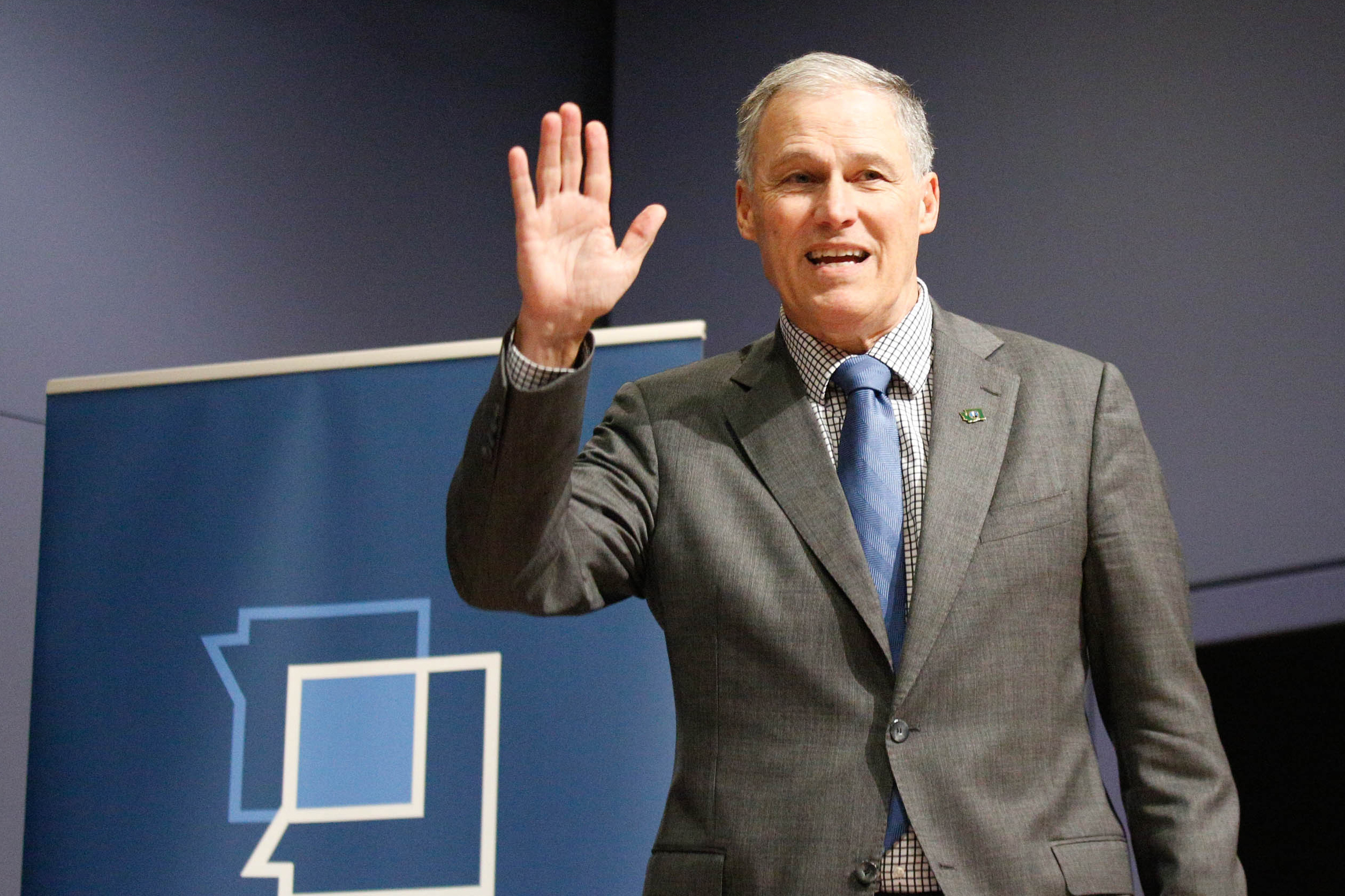 One day after President Donald Trump threatened to send the military into states that failed to “dominate” citizens involved in looting and rioting, Gov. Jay Inslee said he isn't concerned about military action within Washington's borders.

"The one thing about Donald Trump is that if he says it’s raining, it's probably sunny, and if he says he's sending the Army, they probably aren't coming," Inslee said Tuesday during a live virtual event hosted by Crosscut.

Reacting to a question asked by Crosscut news and politics editor Donna Blankinship, the two-term Democratic governor also expressed disgust over the forced removal of protesters in Washington, D.C., the night before for the purposes of a presidential photo opportunity.

"I've seen a lot of outrageous things in my life," the governor said while sitting in a conference room in Olympia. "But to have a president to claim that he is a friend of legal protesters and then gas them and move them out of a public space during a peaceful protest — where he goes and holds up a book with which he is not familiar, which is the Bible, in front of a church which did not invite him — is one of the most outrageous abuses of public office that I've seen in my entire life. And he should be ashamed of himself."

The governor's words echoed rebukes from Democrats and at least two Republicans in Washington, D.C., where the president was accused Tuesday of infringing on the rights of protesters and fanning the flames of discord. The protesters in the nation's capital joined thousands of Americans, including demonstrators in Washington state, protesting racist policing following the killing of George Floyd.

The 30-minute live interview with Inslee was intended to focus on the state's response to the coronavirus pandemic, but the governor spent the first few minutes answering questions about the presidential threats and unrest in the streets of the state's largest cities.

In answering a question about police response to the peaceful protesters, as well as the looting that has followed these protests, the governor did say that he had concerns about "a picture of an officer with his knee in someone's neck or back."

"I know there [have] been concerns about some of the incidents and those need to be reviewed in a transparent way," he said. "And if there was inappropriate activity, then it needs to be sanctioned."

The governor also expressed concerns over the impact of the protests on the COVID-19 infection rates in the state, invoking the 1918 Philadelphia parade that is credited with increasing rates of the so-called “Spanish flu” in that city.

“Any time you have thousands of people who are not socially distancing, many of whom are not wearing masks, that is a significant concern.”

RSVP now for the next Crosscut Talks Virtual Session: A Conversation with Senator Patty Murray

Though it has been overshadowed by the recent unrest, the phased reopening of Washington state businesses is also being overseen by the governor. On Monday, the state allowed a number of counties to ease restrictions on some businesses and gatherings, but some citizens remain frustrated by the process. Asked whether he would have done anything differently to contain the virus, Inslee stood by his approach.

“It does appear that we reduced the curve for this disease considerably more than other states and countries. So, for the moment, it looks like our decisions have been beneficial and worked.”

The governor also addressed concerns over the state’s ability to sustain its fight against the disease as a recession eats away at the its tax base and the pandemic response empties Washington's reserve fund, currently about $3 billion. Noting that the state is facing a $6 billion shortfall, the governor said that he would consider reconvening the Legislature in 2020 to address the new economic reality.