The vote comes amid ongoing protests and weeks of pressure from community advocates and some union members. 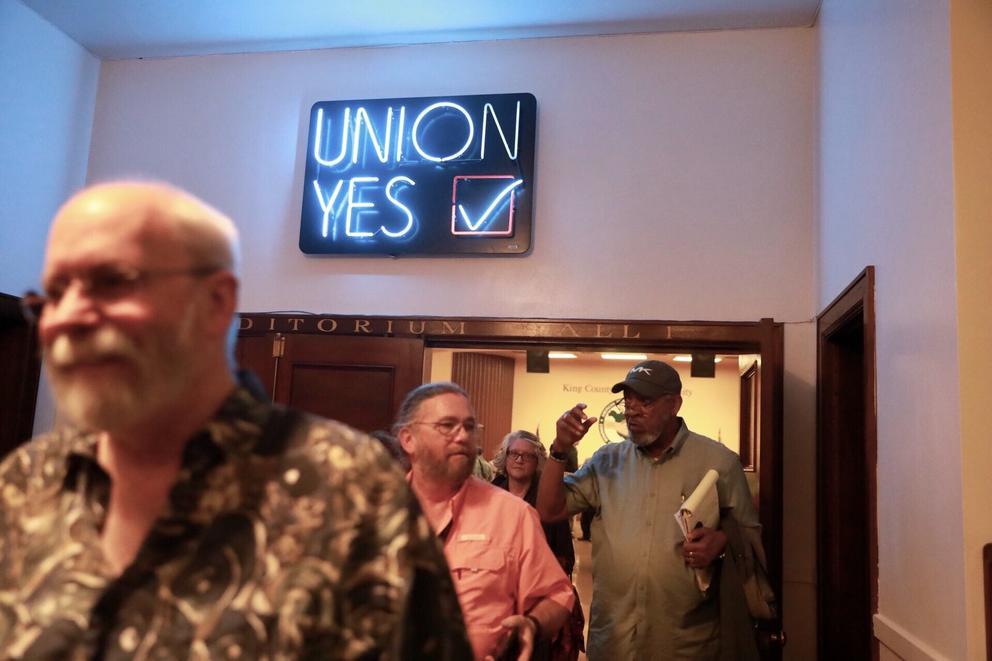 Amid heightened scrutiny of police unions and their place in the labor movement, the Martin Luther King County Labor Council voted Wednesday to expel the Seattle Police Officers Guild, which represents roughly 1,300 officers, from its ranks.

The vote comes two weeks after the council, an affiliate of the national AFL-CIO, passed a resolution calling on SPOG to acknowledge and address racism within its ranks and law enforcement more generally, and to commit to negotiating collective bargaining agreements that do not evade accountability.

The police union’s board of directors acknowledged in a letter this week that “institutional racism exists not only in the criminal justice system but more broadly,” and its president, Mike Solan, met with members of the council’s executive committee to discuss a path forward.

"We see a future, one that engages in these robust conversations, in particular with race and how the institution of racism impacts all of our labor unions, not just law enforcement," he said.

But the efforts fell short. A majority of delegates concluded the union should be removed from the council.

"We can’t both stand with a  police system that’s set up to hurt our Black community and stand up for our people of color who are oppressed by police," said Jane Hopkins, executive vice president of SEIU Healthcare 1199NW.

The labor council, which collectively represents more than 100,000 workers in King County, generally provides advocacy for labor causes and endorses political candidates. Its vote to expel the police union symbolizes the stunning pace and impact of the protests against police brutality in Seattle and across the country since George Floyd was killed by Minneapolis police on May 25.

Just two years ago, the same labor council vehemently lobbied the Seattle City Council to ratify the police union’s new contract. Its executive treasurer-secretary, Nicole Grant, said at the time, “It’s time for supporters of police reform to back off and allow workers to have their raise.”

But Grant and others have since changed their tune.

“I believed in a vision that police could be protected by their contract and that their engagement with the labor movement could be a place where the best work is done to engage and have meaningful relationships in the community and talk about racism and anti-racism openly, in a way that changes things and makes things better for everyone,” Grant told Crosscut recently. She said she now no longer believes that vision is realistic.

"We have listened to our community and responded by doing the right thing," she said Wednesday.

In practice, the implications of SPOG’s removal from the Martin Luther King County Labor Council are unclear. Kevin Stuckey, its former president, who was well-liked by labor council executive members, had already lost his seat to Solan in a landslide election earlier this year. Solan so far has not built much of a relationship with labor council leadership.

The biggest benefit of council membership is public advocacy. The city and the police union were scheduled to begin negotiations on a new contract in April, but the talks have so far not begun.

But as a marker of the current moment in Seattle and the country, the union's expulsion is significant. Calls to remove police unions from labor councils in the United States are not new, but have grown louder in recent weeks. A petition from members of the Highline Education Association calling for the police union’s expulsion gathered hundreds of signatures from union members of color, and advocates participating in local protests have called on the labor council to expel SPOG.

In a letter published Wednesday, leaders from local organizations that serve communities of color, including El Centro de la Raza and the Asian Counseling and Referral Service, called for the police union to be removed from the council.

“Police have historically been tasked with enforcing laws designed to justify economic inequality and enforce racial hierarchies,” the letter read. “History shows us that when police have shown up for workers, it’s always been to silence them.”

Nationally, member unions have increased calls to kick out the International Union of Police Associations from the ranks of the national AFL-CIO. The AFL-CIO has so far resisted, passing a resolution Tuesday that stated, “We believe the best way to use our influence on the issue of police brutality is to engage our police affiliates rather than isolate them.”

The Martin Luther King County Labor Council’s vote appears to be the first act of expulsion since Floyd was killed.

"I don’t think the [labor council] can be a trusted community partner in the police reform conversation as long as SPOG, who has historically resisted all accountability measures, is part of the council,” he said,

The close vote, however, reflected a hesitancy on the part of some labor delegates to exclude police unions.

“If you can kick somebody out in a month with just a majority vote, that gets really dangerous,” said Monty Anderson, executive secretary of the Seattle Building and Construction Trades Council. “Who else would you kick out? How far do you want to take that?”

Anderson said he felt the police union had answered the labor council’s calls, as laid out in the recent resolution.

“For the amount of effort that’s gone into this, I think this is two steps away from the real issue,” he added.

Kenny Stuart, president of the Seattle Fire Fighters Union, said the process was too rushed and would set a bad precedent for the future. Firefighters depend on police to keep his members safe at emergency scenes, he said.

"As a labor organization, we need to be placing the lion’s share of the blame on management and our elected representatives and our corporations and not solely blaming workers," Stuart said. "That’s an old trick."

Police unions’ place within the labor movement has always been tenuous. Their politics often lean more conservative (the national Fraternal Order of Police endorsed President Donald Trump in 2016), which puts them at odds with many other unions.

Their role as law enforcement officers — and their legal right to kill — has spurred even the most diehard labor advocates to call for a distinction. “I would say that police are different than other workers,” said Charlotte Garden, a Seattle University associate professor of law who specializes in labor issues. Their fierce defense of members can be seen as coming at the expense of the community’s good, she said.

“In an ideal world, police unions would say, ‘We should be bargaining for the common good and aligning our interests with community interests,’ ” Garden said. “I think there’s a way in which that would be in the self-interest of police unions.”

So far, that is not what happens, she said.

Locally, SPOG’s membership in the labor council was relatively new. It joined in late 2014 on the urging of its then-president, Ron Smith. Under his successor, Stuckey, the ties grew closer. Stuckey offered his voice for a few issues important to labor and in turn had labor council members hold a press conference on behalf of his members’ controversial new contract.

The Seattle City Council ratified the contract, with only Councilmember Kshama Sawant voting against it.

Within the labor council itself, the vote to expel reflects a divide that generally becomes clear to the public only during election years. During the 2019 election, members were split on backing Sawant — a socialist — or someone else. After endorsing her in 2015, the council went against Sawant and in favor of Zachary DeWolf.

The council also endorsed Mayor Jenny Durkan for office in 2017.

Since WA implemented new police use of force laws, SPD officers have sent fewer people in mental health crisis to the hospital.