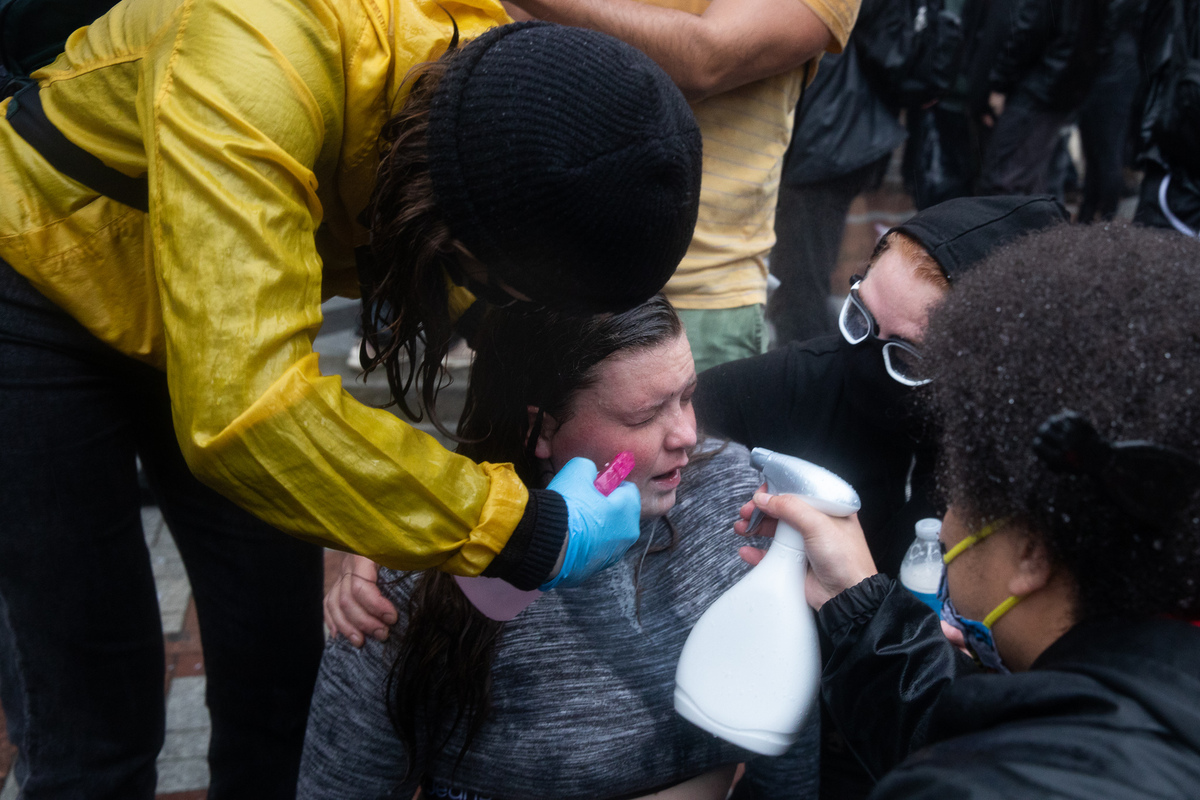 Volunteer medic Raviv Hileman was tending injured protesters on Capitol Hill a few weeks ago when he realized police weren’t just using flash-bangs, rubber bullets and tear gas to scatter the demonstrators. They seemed to be aiming at nurses and other medical personnel as well.

“We were definitely targeted,” said Hileman, a 44-year-old Renton resident who works in tech and has medical training. “I could see the cops charging in their riot gear.”

Hileman said that just after midnight, in the early hours of  June 8, Seattle police hit him with a flash-bang as he carried a critically ill patient on a stretcher. He said he was wearing a white hardhat with a bright red cross and a vest with the words “Don’t Shoot EMS.”

Police “hit the back of my leg, where I still have visible bruises,” he said in a recent phone interview. “It's just unexcusable. I mean, they knew who we were. They put that young woman’s life in significant more jeopardy.”

Across the country, as protests over the death of George Floyd have continued, so has the need for medical volunteers who tend to everything from minor scrapes and bruises to life-and-death situations. But nurses and others trained for this medical work say police are, at a minimum, getting in their way and ultimately placing the public in danger.

In New York, police pinned a medical volunteer face down on the ground, while others screamed, “He’s a medic!” In Austin, Texas, medical volunteers said police fired beanbag rounds at them. In Los Angeles, one volunteer described being tear gassed by police. And in Asheville, North Carolina, the police chief apologized after officers destroyed a medical aid station.

Andrew Myerberg, director of the Seattle Office of Police Accountability, confirmed his office is investigating the June 8 incident involving Hileman. The Seattle Police Department said, “All force used during demonstrations will be reviewed per department policy.”

Street medics have worked to assist protesters since at least the 1960s Civil Rights Era.

Hileman said he was inspired to help those protesting in Seattle after watching a viral video of a pink umbrella crossing a barricade on Capitol Hill, apparently prompting police to deploy heavy amounts of tear gas during a protest there. Since then, Hileman said, the informal group of medics he volunteers with has grown to approximately 100 people.

On the first day he volunteered, June 6, Hileman said police made the medical volunteers temporarily abandon their first-aid tent.

“I'm not sure what they were trying to accomplish,” Hileman said. “Maybe just a show of force. I don't know.”

But what prompted Hileman to finally speak out were the police tactics used the following day, which forced him and others to postpone the immediate assessment of a critically injured patient — a woman named Aubreanna Inda, who police hit with a flash-bang and who went into cardiac arrest several times. A doctor told Inda she could have died if not for the medics performing CPR, according to court documents related to a lawsuit Black Lives Matter Seattle- King County filed against the police and city over use of force. As a consequence of the lawsuit, a judge has ordered Seattle police to stop using chemical irritants and throwing projectiles against peaceful protesters.

“I don't know if I can adequately explain the terror you feel when you are out treating somebody, and you don't know if you're going to be able to save them,” Hileman said.

Danielle Meehan, a 26-year-old nurse at Harborview Medical Center who is part of the same medical volunteer group as Hileman, said police have targeted her and her colleagues in other ways. Meehan said police have stationed vehicles next to their medical tent at Rancho Bravo Tacos, watching them for hours.

Meehan said she was also on Capitol Hill earlier this month when Dan Gregory was shot by Nikolas Fernandez, who was attempting to drive through a crowd of protesters.

The medical volunteers who helped escort Gregory out of the crowd were threatened with arrest by police before another officer intervened, Meehan said.

Both Meehan and Hileman say they continue to volunteer on Capitol Hill and worry they could be singled out again.

“Personally, I know I would like to hear from the mayor and the chief of police, something along the lines of, you know, any officer who targets somebody marked as a medical volunteer, especially if they're providing care, is fired,” Hileman said.