Similar groups have returned to Asian-American communities across the country in response to property damage and racist incidents. 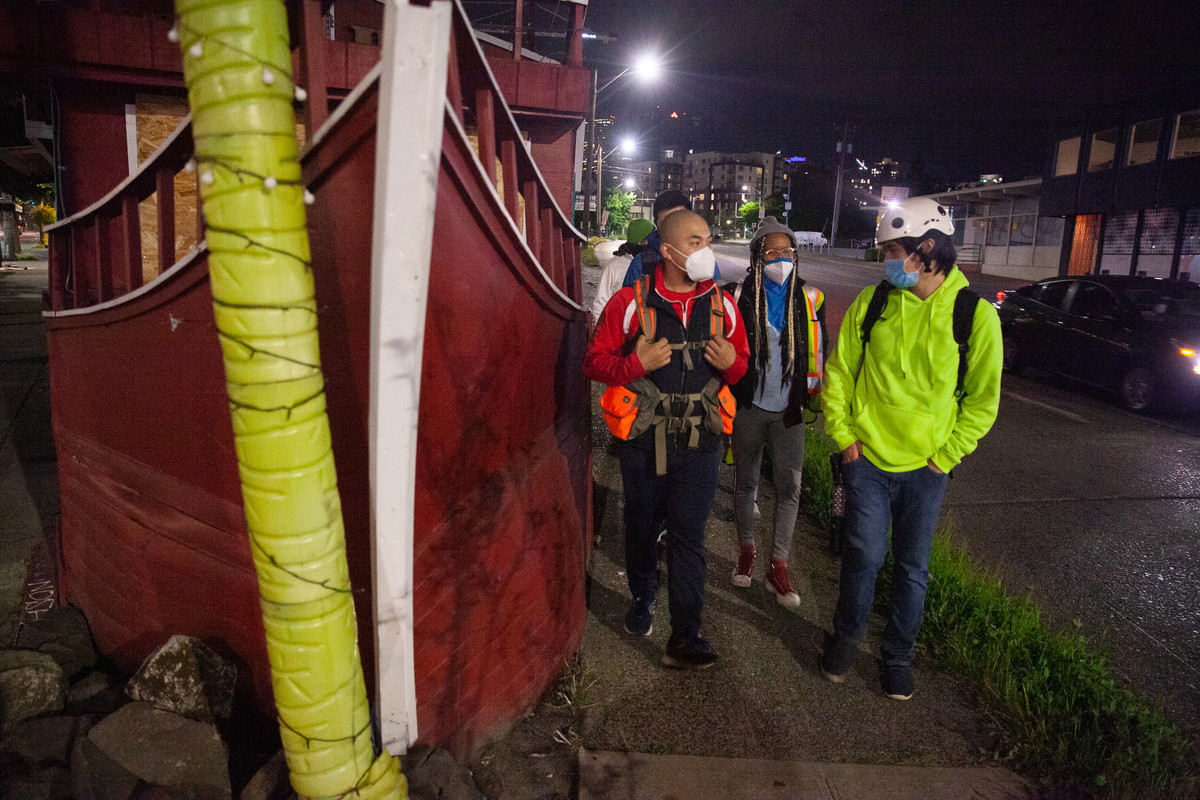 Nights in Seattle’s Chinatown-International District look different these days. Although the neighborhood was once a hotspot for foot traffic into the early hours of the morning — some restaurants and businesses stay open later than those in other parts of town — far fewer people have been walking its streets since the coronavirus pandemic began.

As a past resident of and frequent visitor to the neighborhood, Matthew Toles made a plan to change that. He organized a volunteer group to patrol the neighborhood at night after a rash of looting and vandalism in the neighborhood in early June. But he saw a need for the Chinatown-International District Community Watch long before that.

“There’s a history of police apathy in the ID, and many people have done this,” he said. The recent incidents of looting and vandalism simply “made it obvious to the community that something had to be done.”

Since June 1, Toles has gathered volunteers nightly near Hing Hay Park’s gazebo archway in the CID about 10 p.m. He begins by telling them the rules before starting the night’s patrol. No guns. Stay together. Engage with caution. This isn’t a militia, he’ll say, describing the group instead as  “social pressure.”

The idea of a neighborhood block watch isn’t new. The U.S. Department of Justice notes an increase in the popularity of these groups starting in the 1970s. But the CID Community Watch’s creation follows another trend, that of Chinatown neighborhoods, from San Francisco to New York, that have responded to a surge of anti-Asian racist incidents during the coronavirus outbreak.

Seattle’s group started later than others, after the first weekend of marches against police brutality sent some people wandering into the neighborhood for malicious mischief unrelated to the protests. But challenging the role of police in society adds another layer of significance for Toles; the group could, perhaps, offer an alternative way of keeping the peace.

“There’s a lot of places this group could go, and that’s one of them,” he said. “It really just depends on what the future has in store for us.”

Toles and his fellow block watch evangelists say they’re responding to a need in their neighborhood, and it makes sense that the people who know an area best would also know how to approach these issues.

Seattle has its own history of block watches to illustrate that: The Queer Patrol, for example, began in the historically LGBTQ neighborhood of Capitol Hill as a means of keeping queer residents safe. Another group, the West Seattle Block Watch, formed in response to an increase in area property crimes.

This approach has made sense for communities across the country. The Justice Department linked block watches to a “significant reduction in crime,” amounting to about a 16% decrease in neighborhoods with a watch group.

Maiko Winkler-Chin, executive director of the Seattle Chinatown International District Preservation and Development Authority (SCIDpda), said Chin’s effort was borne out of a similar attention to the needs of his community. One need Chin was responding to when he began his work in the 1960s, she said, was for better public safety response.

“Our neighborhood was not being served from a public safety perspective,” she said. “That’s not just police but that’s also fire, and he, as a student at Garfield High School, was really kind of motivated by what he saw with the Black Panthers and their care of community.”

She added that Chin’s work “was a public safety element of making sure we’re caring for community in greater way, of which one [way] was patrolling around.”

Dean Wong, one of Chin’s close friends who helped create the International District Emergency Center, said Chin alone primarily took up the job of walking the neighborhood’s streets. Since his death in 2015, that position has been vacant. The emergency center now primarily offers  assistance training and booths at neighborhood events without an on-the-streets patrol.

Winkler-Chin said that she had anticipated some changes before his death. With Chin being a one-man operation, she knew it would have become difficult for him to keep up the patrols forever, but she wasn’t sure how it would evolve.

Block watches forming in Asian American communities across the country could offer some hints. Karlin Chan, organizer of the newly created Chinatown Block Watch in New York, said it was important for him to create a physical presence offering security to neighborhood residents. He created the group a couple months ago in response to racist incidents against Asian Americans in the city, and many residents already recognize his group patrols.

“I wanted to do something visible to assure the community and residents,” he said. “If something happens, we can step in and try to diffuse it.”

Wong said a physical presence is part of the power of these groups: “It’s all about building community service for our people.”

While Seattle’s Chinatown-International District has faced all kinds of challenges in the past couple of months, residents and businesses have also seen a wave of help in response. Volunteers have come out in droves to board up and paint businesses, donate money, deliver food to elderly residents and offer myriad other forms of aid.

Wong said he’s found hope in the help that’s recently sprung up, and even what he’s seen since Chin’s death. The day that he died, Wong said he walked down to Chin’s home in Canton Alley and was pleasantly surprised to see a crowd that had come to mourn him. Even now, he sees people continue to leave paper cranes and other small tributes in the alley to honor him.

“It made me realize that there are a lot of young Asian Americans getting involved in the community in various ways,” he said.

Toles said that surge of help is partly why the community watch group came together so quickly. The CID Community Watch Facebook group garnered dozens of members in the span of days, now numbering just over 200. Some members were residents who were already interested in this work, like Tanya Woo, who had done check-ins with the neighborhood in the past while in her car. She was driving through the International District the night businesses were looted and she was able to call the police about a couple of incidents as a result.

“I really believe in this goal, and that there’s safety in numbers,” Woo said. “There’s just so much fear, so having a group of people around at night could give them hope.”

Chris Yin, a co-organizer of the watch, said the group is still in its early stages. While it started as a night watch, community feedback has helped expand its goals; members have also walked people home at night and have begun offering water bottles to anyone who needs one. While the group hasn’t often encountered violent situations, it’s still figuring out what its response should look like when it does.

So far, the group has called the police three times, twice in response to assaults members have witnessed and once when a person was casing cars, but the police have not been as responsive to their calls as the group would like. Toles said it’s frustrating, but also another reminder of the reason for the group’s existence.