‘Outside agitator’ narrative not supported by Seattle arrest data

Political experts say the outside agitator trope has roots in the civil rights movement. 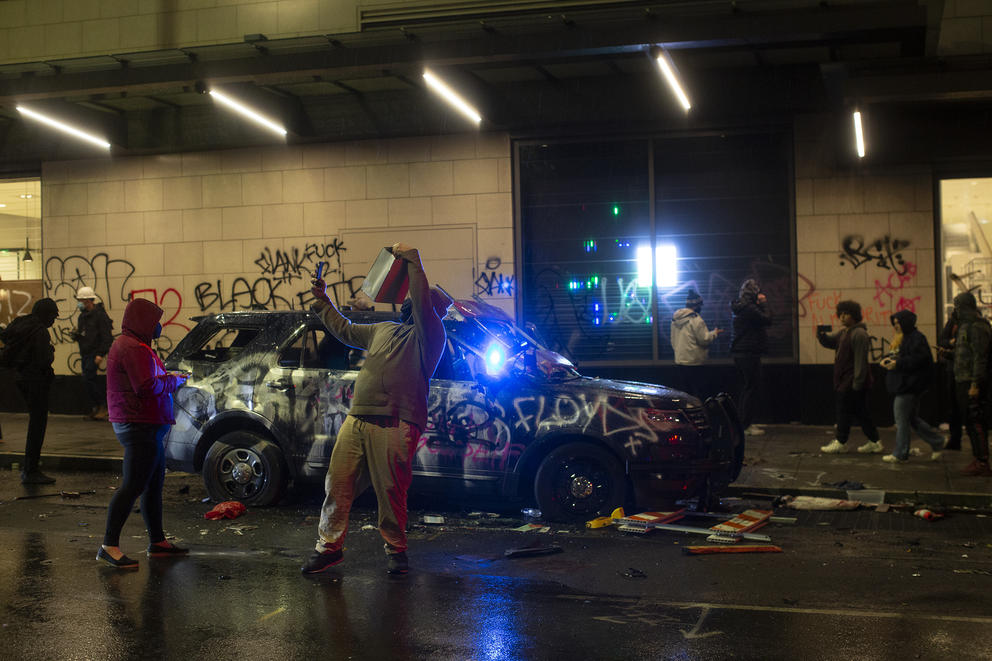 A man takes a selfie with a burned-out Seattle police SUV in downtown, May 30, 2020. (Shaminder Dulai/Crosscut)

Since the first protests over the killing of George Floyd flooded the streets of Minneapolis and then Seattle, political leaders have been blaming “outside agitators,” not homegrown activists unhappy with the status quo.

But arrest data from Seattle shows a different story. Those arrested during the protests, now entering their sixth night, are almost all from the state of Washington. Political experts say the long-running trope of the “outside agitator” has always been a false flag to distract from the truth of anti-racism protests, implying that all the unhappy folks come from elsewhere and local communities are doing fine.

Neither Seattle Mayor Jenny Durkan nor Police Chief Carmen Best has pointed directly to outsiders, although the two have both made reference to people “coming in” to Seattle to cause disruption.

“Those who came down to Seattle to do nothing but cause damage, to hurt property, to loot, to steal — that’s not acceptable,” Durkan said during a press conference over the weekend.

“What we can’t have is people coming into this city and literally tearing it up,” Best said, adding later, “If people come into the city to destroy the city, we have to take action.”

Best later sought to clarify her comments. “When I said coming into the city, I really meant people coming into downtown,” she said.

A spokesperson for Durkan said in an email that she did not mean people entering the city. "What she said is some individuals have attended demonstrations for the sole purpose of causing destruction and instigating situations," the spokesperson said.

Implications of people coming into the city mirror what other mayors, governors and government officials have said across the country, blaming those from elsewhere for the unrest in their cities and states.

“Groups of outside radicals and agitators are exploiting the situation to pursue their own separate and violent agenda,” U.S. Attorney General William Barr said in a statement about what he referred to as the “riots” over the killing of Floyd at the hands of Minneapolis police officers.

Both Barr and President Donald Trump have blamed far left extremists, such as antifa, for the protests against police brutality. On Sunday, in the midst of people marching in a number of cities, Trump tweeted that he would be designating antifa a “terrorist organization.”

Six years ago, officials pointed to outside influences wreaking havoc during the protests in Ferguson, Missouri, over the police killing of Michael Brown.

Between when the protests in Seattle began Friday until early on the morning of June 1, Seattle police made 82 protest-related arrests, according to data provided by the department. Most of the arrests were for burglary or assault on an officer, with several people picked up for not dispersing when ordered to.

It’s unclear how those numbers compare with the protesters who were not arrested. It would be impossible to take a census of the thousands who marched through downtown Seattle, the Capitol Hill neighborhood and onto Interstate 5.

Durkan has made one explicit accusation: “Much of the violence and destruction, both here in Seattle and across the country, has been instigated and perpetuated, not by the people most impacted by generations of discrimination and institutional racism, but by young white men,” she said. “These were not the acts of allies.”

Arrest records suggest some truth to this statement, although the data is incomplete and whether those white men are allies or enemies of the other protesters cannot be known for certain. Of the 46 arrests with race listed, 32 were white.

Learning from the past

Experts say government officials and others have blamed outside influences for civil unrest to delegitimize protests and point to various factions.

Deborah Ahrens, a professor of law at Seattle University, said the outside agitators trope has roots in the civil rights movement.

“Often Southern communities would blame protests and other efforts on ‘outside agitators,’ by which they meant ‘Northerners,’” Ahrens said. “in other words, our own community [and Black people in the community] are happy and fine.”

Christopher Parker, a political science professor at the University of Washington, said the pointing of fingers at outsiders was meant to send a clear message about “good Negroes,” as opposed to other Blacks standing up to authority.

Civil rights leader Martin Luther King Jr. was also accused of being influenced by outsiders, Parker said, in part because he was funded by big charitable foundations in the North.

Ahrens said public officials today may be motivated to ascribe protests to outside agitators “because it suggests there is no actual, local unrest or problem.”

“They also genuinely may in some cases be trying to suggest that the protests are locals, but people harming property are not,” Ahrens added.

With white supremacist groups such as the Proud Boys rooted in the Pacific Northwest, Parker said there might be some legitimacy to the idea that outsiders could be attempting to infiltrate protests to cause them to be more violent or to hasten a race war.

Just as there were those who blamed outsiders during the Civil Rights Era, the infiltration of protests today is about maintaining the status quo.

“In both cases, again, it’s about the maintenance of white supremacy,” Parker said.