Pandemic, then protests: Why some Seattle businesses boarded up 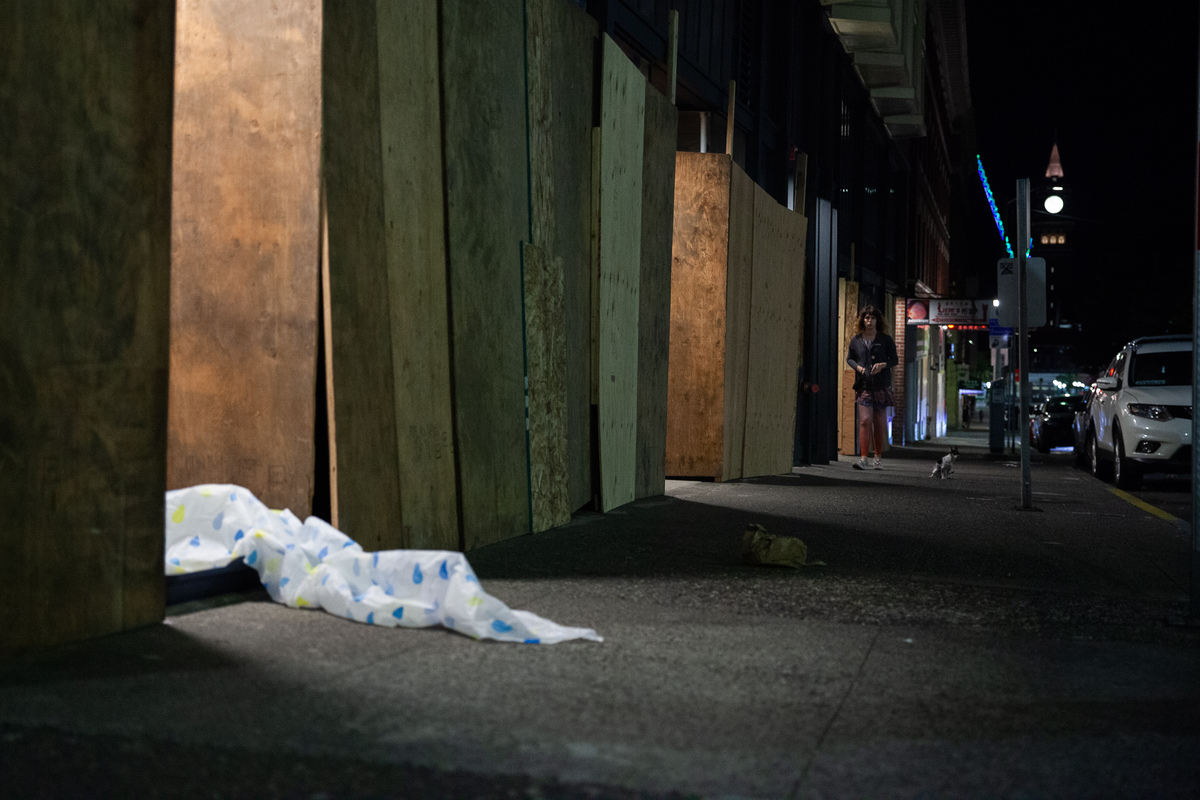 Lei Ann Shiramizu watched the protests on her home TV screen that first Friday evening. The protests in Seattle were like many across the country, a response to the death of George Floyd at the hands of a Minnesota police officer.

As she was watching the TV news, she saw police officers stepping in, the protest escalating, and then a movement of crowds toward the Chinatown-International District, the neighborhood where she has run her boutique, Momo Seattle, for the past 13 years.

“My heart was racing that night,” she said. “I couldn’t sleep.”

She rushed to check her shop the next morning. It was undamaged. But the same was not true for restaurants and other shops in the neighborhood. Windows were shattered at some; others had graffiti; a few, like Jade Garden, were burglarized. The Downtown Seattle Association reported that over a hundred businesses were damaged after the first weekend of protests. It was a particularly hard hit for a neighborhood where business owners had already reported lost sales from anti-Asian bias early on in the coronavirus pandemic.

Shiramizu didn’t want to wait for damage to start protecting her store. With her sister’s help, she stripped the store mannequins, moved everything out of the windows and cleared out as much merchandise as she could take home in a car.

Now, the Chinatown-International District is lined with storefronts masked by plywood, Momo Seattle included. Many other business owners have done the same to proactively fend off future damage. Seattle Public Utilities, which has offered to board up storefronts around town, has done so for about 230 businesses in the neighborhood since the beginning of the month. Although it initially focused efforts on the neighborhood, it's now shifting resources to other impacted areas.

Business for Shiramizu had already slowed since the pandemic began and since she'd closed up the storefront, now selling merchandise online until she can reopen. The added uncertainty when the protests began was frightening, especially because she said her insurance alone wouldn’t begin to cover all the costs incurred from being vandalized or looted.

“Before, you didn’t know what was going to happen in the next six months,” she said. “Now, it’s like, tomorrow are we even going to be around?”

Many Seattle business owners have found hope in recent days, as King County enters Phase 1.5 of coronavirus precautions, allowing some stores to reopen with limited capacity. However, the process has been complicated by all that has happened since the protests began.

Erin Nestor, owner of the restaurant Two Doors Down, said she’s less concerned about property damage to her Capitol Hill location, which is many blocks away from the main protest areas. She’s more concerned about the well-being of her employees. She has adjusted store hours in the past week because of worker concerns about unreliable transportation and navigating the neighborhood safely. The bar has been short staffed this week as a result.

“The anxiety is real,” she said.

Nestor said that she supports the protests, but the response to the demonstrations, from the short-lived city curfew to the police use of tear gas and pepper spray, has made operating the business and ensuring worker safety difficult.

Regarding physical damages, she was more worried about her unopened second location of Two Doors Down in Pioneer Square. The restaurant had planned to open April 1, but was delayed by coronavirus. She’s unsure when the new restaurant will open, or even when it can safely remove the newly added plywood from the huge front windows.

Even getting a business boarded up can be difficult. As Nestor learned when she first called the city of Seattle for help, Seattle Public Utilities couldn’t immediately assist her due to capacity limitations. It recommended she board up her storefront herself if she wanted it done sooner.

Shiramizu’s landlord, who reached out to Seattle Public Utilities on her behalf, initially heard a similar message. Both Shiramizu and Nestor eventually got help by spotting in-person city crews boarding up a business and walking over to ask for assistance.

Not all businesses in impacted neighborhoods have boarded up their windows. One such business is Marjorie’s on Capitol Hill, which has not had any damage so far. Donna Moodie, the restaurant’s owner and executive director of the Capitol Hill EcoDistrict, said she would rather avoid boarding it up at all. With boarded-up windows, she thinks the restaurant would look like it's under construction rather than open.

Moodie said that one of Marjorie’s best qualities is its connection to the community around it. The storefront, flanked by tall windows, makes it easy to see into — part of its draw, Moodie said, as it allows passersby to look in and feel connected.

“We’re not active members of the community because of the building,” she said. “If something happens to me or my business, I can recover — I can’t live in fear, and I support the protests."

Moodie added: “Nothing that is physical replaces the value of human life.”

Since the protests began, she has shown support and said her restaurant has provided bathroom access and food for passing protesters. In an email, she said that she’s been “disheartened” by the Seattle Police Department response to the demonstrations and feels heightened concerns for businesses closer to the heart of the neighborhood's corridor.

Moodie said she’s felt the love in return. This past week, she and fellow Black business owners have seen a wave of support from Seattleites as protesters have emphasized supporting Black-owned businesses.

Many business owners have also seen support from volunteers, who’ve contacted them since the protests began and offered their services in boarding up windows and providing other forms of assistance.

One such effort in the Chinatown-International District has been organized through “Support the ID — Community United,” a Facebook page set up at the beginning of the coronavirus-induced shutdowns in early March. Sarah Baker, one of the page administrators, says group members have been contributing to an Excel spreadsheet that keeps track of businesses in need of help. Members of the Facebook group have also helped connect businesses with artists to paint a mural on their new plywood fronts.

Mami Hara, general manager of Seattle Public Utilities, said that once boarded-up businesses feel ready to take the boards down, the city will offer help again. She also wants to invite volunteers to help restore businesses to what they looked like previously.

Shiramizu said that although business has been complicated since she moved her wares out of the store, she’s been cheered by the support she saw from Seattle Public Utitlities workers in getting her windows boarded and, later, from artists offering to paint them.

“We’ve probably seen more gifts now than ever before,” she said. “Engaging with people through this has been a great gift — they restore my faith in the goodness of this world.”