Health professionals don't want people ‘to survive COVID-19, and then get murdered by police.’ 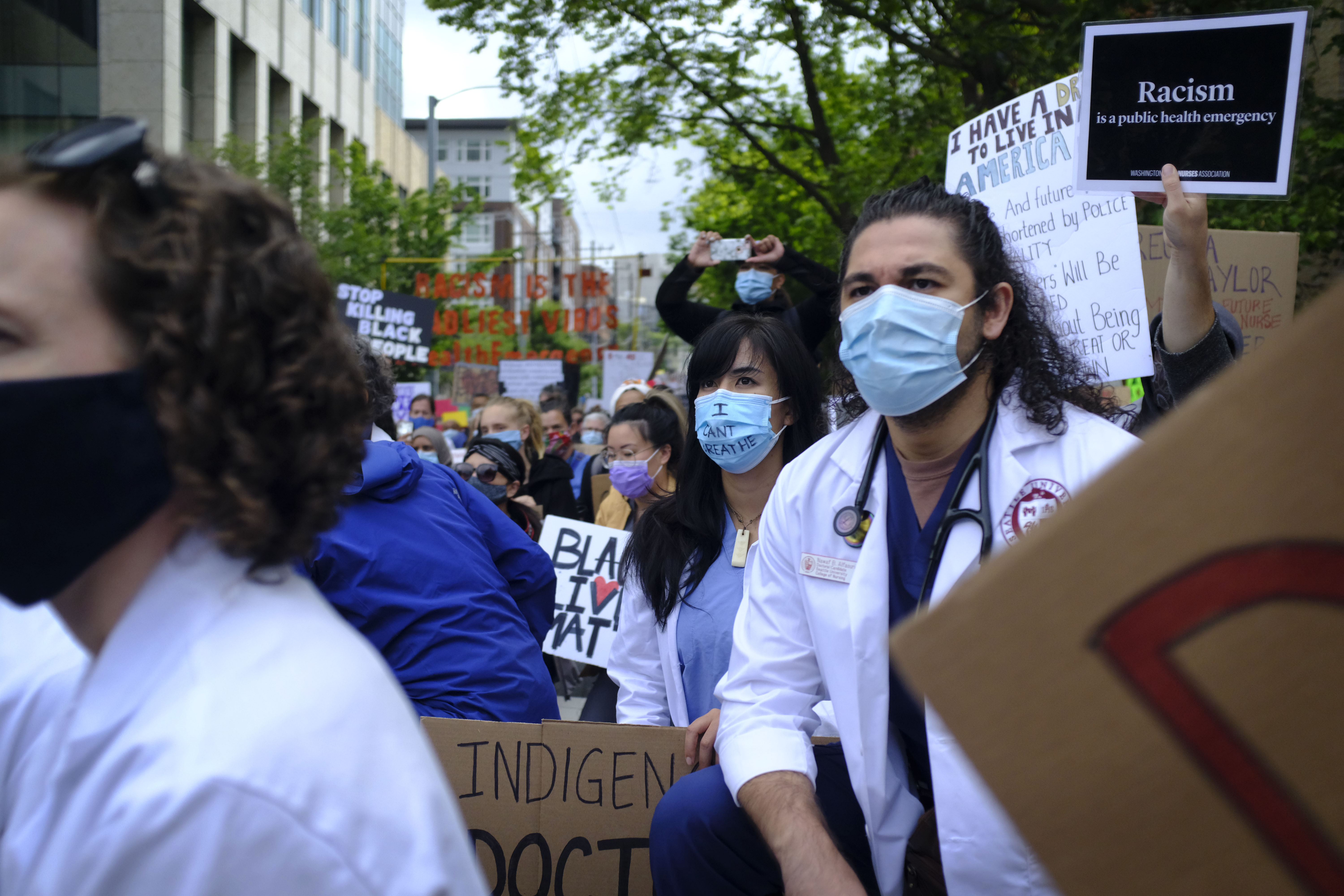 Dr. Nkeirika Banda’s phone was vibrating. “I’m scared to check it,” said the HealthPoint family medicine resident. Her mom, who lives in Zambia, is a worrier — and Banda had just sent her family a photo from the intersection of James Street and Sixth Avenue, where she was supporting the Seattle’s Doctors for Justice rally against racism and police brutality. “So I obviously didn't tell her that I was coming [to the protest],” Banda said.

Banda and thousands of other health care professionals gathered at 10 a.m. June 6 at Harborview Medical Center in solidarity with Seattle’s Black community. Many of them wore white coats and scrubs, and some were demonstrating for the first time since anti-racist protests started in late May, incited by the filmed death of a Minneapolis man, George Floyd, at the hands of police. Many brought bold protest signs, as well as their children and dogs.

In normal circumstances, being surrounded by thousands of medical professionals may seem like an exceptionally safe place to be. But in protesting the pandemic of systemic racism and police brutality in the presence of police themselves, Banda was willingly exposing herself to risk ⁠— including the risk of being in large crowds associated with spreading a more recent pandemic: COVID-19.

Puget Sound health workers have been actively fighting COVID-19 since Jan. 20 — longer than their colleagues in any other region in the U.S. And for many, the recent protests expose racism as a lasting, insidious health emergency that puts millions more U.S. lives at risk by systematically disenfranchising both Black patients and medical professionals.

University of Washington School of Medicine’s Edwin Lindo, who lectures on race and racism in medicine and law, co-organized and emceed the day’s rally with his wife, Dr. Estell Williams, for local health care workers. Employees within Swedish Health Services quickly backed the event, too, and hundreds of Swedish employees kneeled, took a group photo, and marched from their First Hill location just before 9 a.m. to meet the UW Medicine rally at Harborview and proceed to Seattle City Hall.

Lindo said the links between racism, COVID-19 and police brutality are starkly apparent in the story of George Floyd. Lindo noted that Floyd’s autopsy showed he survived a COVID-19 infection, despite having underlying chronic illnesses overrepresented in Black Americans. “It is the tale of this country that you survive a health care system that has proven to be wholly inadequate to protect the lives and health of Black folks, and to survive COVID-19, and then get murdered by police,” he said.

“I recognize we're in the middle of another pandemic, but this really is an issue that's fundamental to health in general and has been with us, and it's time to [pursue] actual actionable changes that make an impact on the Black community and improve health,” said Dr. Jen Balkus, an infectious disease epidemiologist and assistant professor at the UW School of Public Health, who joined Banda in the march. “There's no way we can move forward with public health if people do not feel safe.”

Banda said she felt she didn’t quite fit in at previous protests, but she felt very strongly about joining a march of physicians. “That's where I belong, you know?” she said.

“There's no progress without struggle,” Lindo had said to a sea of kneeling protesters at the intersection of 11th Avenue and Jefferson Street at the beginning of the march. “And right now we are in the heart of the struggle. So I'm asking you as your brother to continue to fight beyond today.”

Approximately 10,000 people gathered for what would be about three hours of standing and marching under a bright summer sun. The coronavirus had dominated many of their days of late: Banda saw COVID-19 patients at hospitals like MultiCare Auburn Medical Center, while Balkus has engaged in coronavirus-related research. But recent anti-racist protests took precedence for them and the several colleagues who marched in their group; Banda said she requested and was given time off work to march.

“We're doing everything we can do to keep each other safe, but at the same time recognizing if we do not take this action, we're not keeping our community safe,” Balkus said under the Interstate 5 underpass on the way to Seattle City Hall. “This is not a one-day event. This is not a one-month event. This has to be a turning point for all of us to do this work every single day.”

“I just really hope that this is the turning point that we've been waiting for,” said Dr. India Ornelas, an associate professor in the School of Public Health at the UW. She and Balkus are collaborating on research into the coronavirus’s impacts on Latina women in King County. Ornelas’ son is Latino, and she’s joined by a Fred Hutch colleague whose son is Black. “It just would mean an incredible amount to be able to not have to worry about them anymore,” she said.

As the marchers continued southwest toward City Hall, they talked about who had had the coronavirus (none confirmed), the last events they went to before everything shut down, when they planned to fly again. They distributed snacks. When they coughed they reflexively covered their mouths, even though they were wearing masks. Some mused about the debt they owe to the civil rights battles of the past.The group stopped occasionally to take selfies.

“It’s an occasion to remember for the rest of our lives,” Banda said, musing about what she’ll tell her grandkids: “‘Back in my day, we had protests and the coronavirus at the same time!’”

“[As] we are teaching our next generation of physicians, we really want to make sure that we also teach advocacy in medicine,” said Dr. Neville Antia, the associate program director for family medicine residents at HealthPoint. “We're not there yet, but I think that's the next step for us.”

Over email, rally attendee and Swedish family medicine physician Dr. Andrew Wei later said he’s aware many of the privileges and opportunities afforded to him have been made possible through the work of Black activists. “I support their causes because it supports all of us,” he said.

Health professionals present were eager to acknowledge the large historical role structural racism plays in medical knowledge and practice. Dr. Diana Huang of Swedish pointed to how much medical knowledge has been derived from experimentation on Black people without their consent, “yet they often don't get the benefits of medical advances. The medical system often treats Black race as a (usually negative) determinant of health, when the true problem is racism.”

Huang noted Seattle’s progressivism doesn’t exempt it from police brutality or other impacts of racism, like rising income inequality and homelessness. “If anything, the city's reputation may just make people more resistant to accepting that they might be contributing to the problem,” Huang said, citing Robin DiAngelo, author of White Fragility.

Huang said she has treated patients injured by police, as well as patients dealing with the aftermath of losing a loved one to police violence. “While it's hard to prove, you can imagine the chronic stress caused by worry about the police could increase risk of conditions like hypertension, insomnia, obesity and depression,” she said.

Several doctors also noted how this inequality exacerbates the coronavirus’s uneven impact on Black and Latinx communities in Seattle. They are borne out in county COVID-19 data, which show Black county residents are hospitalized at a rate twice that of white residents, as of May 29.

“My patients of color often have trouble getting out of work or obtaining child care so they can take care of medical issues, so care is delayed,” Huang said. “The COVID-19 crisis has highlighted how patients of color disproportionately work ‘essential’ jobs with few worker protections, so they have difficulty getting out of work even if they're ill or in a dangerous environment.”

King County Public Health has emphasized racism’s impact on whether Black residents feel comfortable taking the same infection prevention steps as Seattleites of other racial groups due to fear of being profiled. HealthPoint physician Dr. Manoj Easaw said some of his Black patients are wary of being profiled by police for wearing masks during the pandemic.

Still, some health professionals recognized the predicament faced by police in the absence of community-based alternatives to deal with the homeless and mentally ill. Wei likened calling the police to going to emergency departments: They are both safety nets for those with nowhere else to turn, but neither system has the necessary resources or trained personnel to handle those situations in full.

Wei said that much of what he and his colleagues see in the emergency department is what police respond to: people in mental health or substance crises, or unhoused people looking for shelter. EDs stabilize them and police jail them, but in both cases the person in crisis ends up back in the same situation.

“We see this cycle of ED visits and time in jail for so many people in our communities, and they are disproportionately people of color,” Wei said. “It's a failure of our systems and not our people.”

Banda said she spent much of the past week crying. “It's a sadness that I just don't know how to deal with,” she says, outside of showing up for events like this rally. She’s limited her exposure to emotional triggers like TV before and after her 12- to 14-hour workdays, instead making time to meditate. Despite her success in medicine, racism always looms in the background of her professional and personal life.

“The other day I was walking around [my Queen Anne neighborhood], and I think someone was looking at me like, ‘Oh, do you belong here?’ So that was a scary moment," she said. “But I think I came here today because I wanted to reverse that feeling. I am being seen as more than just a black woman ⁠— I'm being seen as a black physician.”