The police chief's decision comes in response to demands from oversight and community groups that are demonstrating against racism and police brutality. 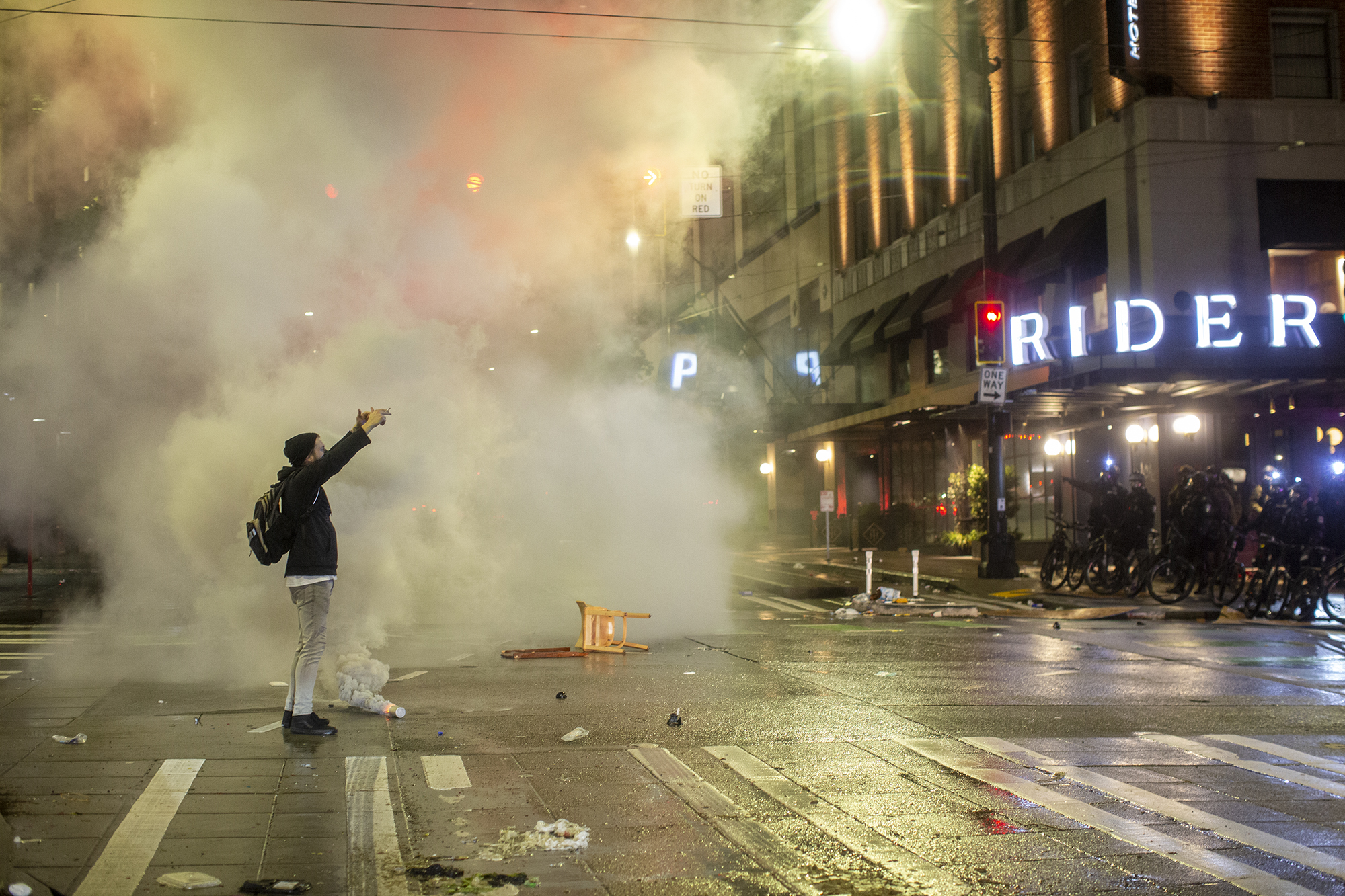 A demonstrator shouts at Seattle Police while standing in a cloud of tear gas downtown, May 30, 2020. Over the ensuing week, tear gas was deployed multiple times on crowds, prompting city officials on June 5 to ban its use against protesters. (Shaminder Dulai/Crosscut)

Mayor Jenny Durkan said Friday the Seattle Police Department will cease using tear gas against protesters for at least 30 days, a stark change from the tactics that have been used routinely over this past week.

"[Seattle Police] Chief [Carmen] Best has ordered, and I agree, she will immediately issue a directive to her officers banning the use of tear gas for 30 days at any of these protests,” Durkan said, adding “SPD officers do not need to be using tear gas at protests as a crowd management tool."

During the 30-day ban, sworn and civilian accountability bodies will conduct a review of the department’s crowd and event management policies, Durkan said.

“SPD remains committed to the mission of managing demonstrations and managing events where no crowd control tools must be used,” Best said. “But we also must protect the life and the property of this great city.”

The mayor’s decision comes on the recommendation of public health officials and just hours after the city’s three pillars of police oversight — the Community Police Commission, the Office of Inspector General and the Office of Police Accountability — jointly recommended that the department stop using tear gas “until such time as any appropriate use can be vetted by oversight entities and incorporated into a written SPD policy.”

“Tear gas is a serious and indiscriminate use of force,” the Rev. Aaron Williams, the Rev. Harriet Walden and Prachi Dave, co-chairs of the Community Police Commission, said in a statement. “Indeed, the Chemical Weapons Convention has explicitly banned the use of tear gas. Furthermore, infectious disease experts have warned police departments around the country against using tear gas, which causes people to cough and can make the body more susceptible to infection, only helping to spread the coronavirus during this pandemic.”

Rubber bullets and pepper spray have not been banned. The use of blast balls, which explode with a loud noise, will also continue, despite past recommendations from watchdog groups to ban them.

After weeks of quiet amid the COVID-19 pandemic, Seattle streets exploded with activity over the past week in the wake of George Floyd’s killing by a Minneapolis police officer. His death — and that of Breonna Taylor, Ahmaud Arbery and many others — cracked open long-simmering anger over how Black people and people of color are treated by law enforcement and other systems of the United States.

Rarely has the country seen such widespread public activism as in the past week. And as the demonstrations have grown, so too have scrutiny and criticism of law enforcement’s response, including its use of tear gas. The images of the heavy haze have spanned the country — from clearing protesters away from President Donald Trump in Washington, D.C., to creeping through the streets of Capitol Hill in Seattle.

Although marked by controversy and arguments over the “right” way to protest, the demonstrations in Seattle have clearly had an impact. In addition to the tear gas ban, Seattle City Attorney Pete Holmes said he would no longer seek to remove federal oversight of the police department, the King County Labor Council threatened to kick out the Seattle Police Officers Guild and several elected officials have called for drastic reductions in the police department’s budget.

The protests in Seattle, involving groups of people consistently numbering in the thousands, have been largely peaceful, including late night dance parties and impromptu concerts. The past several nights have seen limited conflict, but the gatherings have also seen occasional property destruction and flare-ups between demonstrators and police.

The tactics used by the Seattle Police Department — including its use of blast balls, pepper spray and tear gas — have come under intense scrutiny from both activists and elected officials.

“I have never in 25 years of participating in protests in the city of Seattle experienced such an indiscriminate use of tear gas, pepper spray and flash bombs against people who weren’t doing anything wrong, with so little effort to de-escalate, to negotiate with protesters, to utilize peacekeepers and to focus your efforts on people who are doing wrong,” Seattle City Councilmember Lisa Herbold said Wednesday.

Councilmember Andrew Lewis said on Twitter Friday, “If there was ever an easy thing to ban from American streets, it’s tear gas.”

During a recent meeting of the Seattle City Council, citizens repeatedly demanded the department stop using tear gas. One man described the vapors wafting into his apartment window and causing his young child to cough and cry. His family retreated to their car to escape.

Durkan has been met with similar cries; when she appeared before protesters earlier in the  week, crowd members shouted, “No more gas.”

Beyond advocates and some elected officials, public health officials have come out against the use of tear gas, especially as COVID-19 remains a threat.

“Public Health — Seattle & King County opposes the use of tear gas and other respiratory irritants based on the potential to increase COVID-19 spread,” Dr. Jeff Duchin, the agency's health officer, tweeted.

Durkan said the police department will look to creative approaches to crowd management as the protests continue, including working with protesters to de-escalate tense situations on their own and deploying a microphone system to foster better communication.