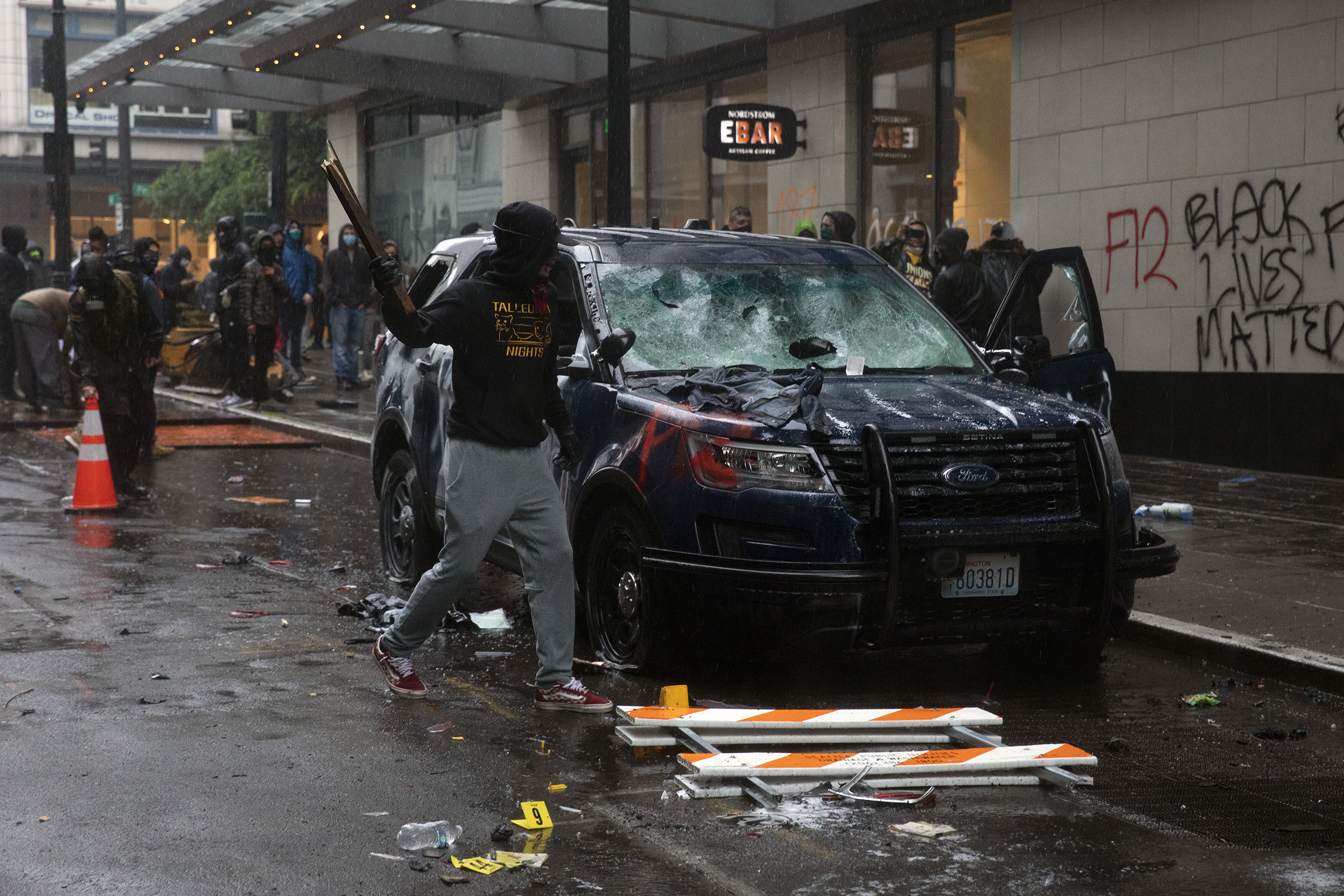 A demonstrator prepares to slam a piece of wood into a Seattle Police Department SUV during protests across downtown Seattle, May 30, 2020. A wave of protests have swept across the U.S. following the death of Floyd. Minneapolis Police Department officer Derek Chauvin has been charged with his murder. (Matt M. McKnight/Crosscut)

George Floyd’s murder at the hands of Minneapolis police sparked protests across the country. Many of these protests have turned confrontational, sometimes deadly. Here in Seattle, vehicles have been set ablaze and store windows smashed. Police and protesters trade mace, tear gas and flash-bang grenades for “rocks, bottles and fireworks.”

The mayhem is undeniable — burning cop cars don’t lie — but who exactly is causing it and what it all signifies are points of high contention. Quite the cast of characters has been implicated: Right-wing infiltrators and agent provocateurs. Left-wing antifa and black-bloc anarchists. Opportunistic looters. Cops, undercover or in uniform. Or could it be “normal” demonstrators, Black, brown and white, young and old? Our mayor has her own theory: the “violence and destruction,” she tweeted Sunday evening, “has been instigated and perpetuated by white men.”

OK, so who did it? It seems clear to me the answer is yes. Yes, yes, yes, yes, yes and yes. All of them. Honestly, it would be shocking if any of these groups did not play a significant role in destroying property or escalating conflicts between protesters and police. Anyone telling you that one or some of these groups are responsible, but not others, is probably trying to sell you something.

Let me clarify what I mean by “normal” protesters. Clearly, the vast majority of people at Seattle’s protests and around the country have been peaceful and respectful of property, as well as persons. But there’s no bright line dividing that majority from those engaging in more rowdy and dangerous activity. The “instigators” aren’t all hijacking, co-opting or scheming to discredit the protests; many really are part of the protests. They are people outraged by the murders of George Floyd and countless others. They or their loved ones are oppressed by racism, poverty and insecurity. Many of them just lost their livelihoods in a pandemic. They are fed up.

There is a wide range of opinion among protesters, as among the public at large, about whether property destruction and confrontational behavior toward police are wrong or morally justified, counterproductive or effective at spurring change. Wherever you stand on these ethical and tactical questions, it’s important to recognize that such actions are far from senseless, and neither are they merely a boiling over of pent-up rage and frustration. Instead, they have a clear meaning.

Here’s one piece of reality: We live in a time of extreme inequality of income and wealth, recently compounded by deadly disease and mass unemployment. While the billionaires are doing their billionaire things, and the reasonably well-off are shopping at Nordstrom and Amazon Go, a large and growing section of the population, of all races, rightly sees little hope of escaping the frantic daily hustle to attain a modicum of economic security, let alone higher aims of self-actualization. For working and poor Black people, all this is heightened by centuries of racial oppression and a president who has unleashed new waves of overt racism and brutality.

“Anti-social” behavior expresses — in a sense, performs — the condition of being shut out of any desirable or dignified place in society. If the ruling class wanted people to respect private property, they should have devised a system where more people had some of it.

Here’s another piece of reality: In a world with such an underclass, the function of police can’t help but shift, away from being the hero fighting the bad guys or the friendly face at the crosswalk on the way to school, and toward the systematic containment, management and repression of those who have been effectively locked out of society. This function has always existed — capitalism has always produced an underclass — but in a time when the ranks of the disenfranchised are swelling, it comes to the fore. The casual murder of poor and working-class Black people by police is only the most egregious expression of this reality. Is it really surprising that some protesters express it in their own way, too, by firing back with bottles and rocks?

This side of reality is difficult for people in positions of power to acknowledge, because it calls into question the legitimacy of their power. Much easier to deny the legitimacy of all the people turning protests into uprisings — some of whom are in fact performing these truths in plain sight — by dismissing them all as political “extremists” of left or right, or mere looters attracted by the siren song of free stuff.

That brings us back to Mayor Jenny Durkan, who doesn’t call out extremists or looters, but instead names a villain even less likely to elicit sympathy in identity-obsessed Seattle: the white male. Here’s the whole tweet: “I want to acknowledge that much of the violence and destruction, both here in Seattle and across the country, has been instigated and perpetuated by white men.” She went on, “These individuals experience the height of privilege and are co-opting peaceful demonstrations that were organized by and meant to center people of color, particularly Black Americans.”

To “acknowledge” carries a whiff of admitting one’s own culpability or facing up to a hard truth — not the hard truths expressed above, mind you, but, presumably, the fact that Durkan shares with those guilty white men the quality of whiteness. By putting on display this symbolic complicity, she can pass over her substantial complicity — most notably, her responsibility for a police force that, according to numerous credible witnesses, has repeatedly initiated and escalated confrontations with protesters. So far, Durkan has steadfastly defended the conduct of the long-troubled Seattle Police Department.

At the same time, by pinning the disorder on white men just swimming in privilege, Durkan dismisses the notion that Black Americans, people of color, or anyone else participating in the protests (including white men) might have grievances that truly call into question or demand a thoughtful response from the status quo over which she presides. For those of us who have watched with dismay her administration’s response to Seattle’s escalating crisis of homelessness during the pandemic — the glacially slow and inadequate provision of hygiene facilities, the lack of substantial effort to open hotel rooms or other appropriate spaces for people to shelter in place, the continued sweeps to nowhere — this insensitivity to the desperation of the poor and oppressed is crushing, but not shocking.

Welcome to Seattle, where our leaders undermine the struggle against racial injustice by scapegoating white men.

Will Durkan get away with it? In my left-wing social media echo chamber, the people are of course outraged. But the white male privilege tweet is more or less trending, with hundreds of thousands of “likes” — so it’s quite possible the fabled average person believes she’s handling the whole situation very well indeed. On the other hand, thousands of Seattleites were there, in person, at the protests, and many of us saw a piece of reality our mayor is trying very hard to hide. And those people know many other people. I don’t know what happens next — for now, the protests continue — but I do know the tensions of this past week will reemerge later this year when the city of Seattle commences its budget process. Faced with a terrifying revenue shortfall, Durkan, the city council and the rest of us will have to tussle about what to cut: programs that benefit homeless, poor and working people, or the police?