Alongside other communities of color, we worked to pass a law making it easier to prosecute violent police officers. 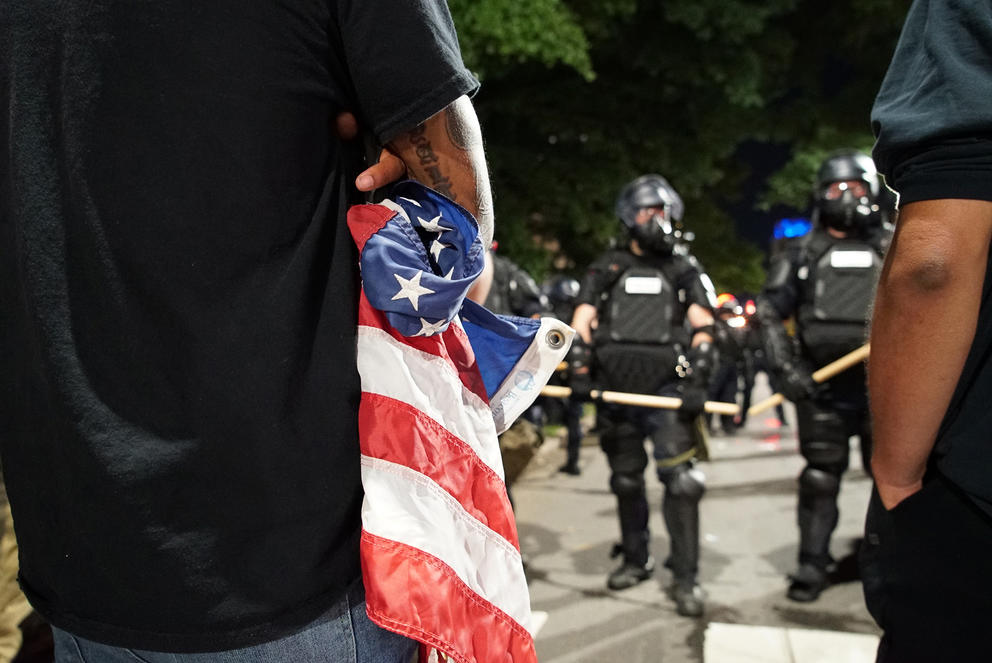 A protester holds a tattered American flag as police stand guard at the old state capitol in Raleigh, N.C., on Sunday, May 31, 2020. Protests over the death of Minnesotan George Floyd while in police custody have swept the nation, raising calls for police reform. In Washington state, I-940 was passed in 2018 to hold accountable police who wrongfully kill. (Allen G. Breed/AP)

They said it couldn’t be done.

They said it was hopeless: Communities of colors would never succeed in changing the law to restrain police violence and make it easier to hold badged killers accountable.

The police chiefs, the police unions, the indiscriminate “thin blue line” supporters who defend any and all police violence — they had way too much power.

It was a political loser.

In 2018, 62% of Washington state voters passed Initiative 940, a citizen’s initiative that made it easier to prosecute violent police officers; required de-escalation and mental health training for police; mandated first aid to a victim of deadly force; and required outside independent investigations into the use of deadly force.

The killing of George Floyd present yet another opportunity for white self-reckoning. Read more.

We offer I-940 as an example of a successful long-term strategy for response led by community of color-led response to police violence. We offer this not as a criticism of the protesters who are exercising their constitutional rights across the country in the face of political inaction, militarized police violence and racist demagoguery from the president. Rather, we hope this can be a useful model for channeling the energy of this uprising into lasting change.

Since it is clear that every level of the political establishment is reactive and paralyzed by countless systemic crises, grassroots mass organizing led by communities of color is the only viable and just path open to reforming law enforcement in this country. We can no longer wait for politicians to receive the right poll numbers and donor feedback to respond as ordinary people die from the countless crises of our time, especially climate change and police violence.

That’s why the tribal nations in Washington state, along with their community of color allies, refused to accept the status quo. Since no one else was rushing to help, our refusal was an act of self-defense.

We became the change we needed. Our message to communities of color and allies nationwide is simple: A grassroots civic reform movement can win and change the laws that protect dirty cops. We did it here. We have a long way to go in Washington, but we are making real progress — and we are offering you our roadmap for the civic engagement part of our strategy.

The citizens that put I-940 on the ballot and led the campaign were communities of color who knew firsthand the agony, dehumanization and insult of systemic police violence and discrimination.

The issue is personal to Native Americans, who are the only population that statistically suffers from police violence on a scale comparable to African Americans. And for one of us, it’s especially personal. Jacqueline Salyers, the beloved niece of one of the co-authors of this op-ed, was murdered by a Tacoma police officer on Jan. 28, 2016.

Jackie was pregnant, unarmed and unlucky enough to be in a car with a boyfriend who had active warrants out for his arrest. During the ensuing incident, police cameras conveniently were shot and allegedly “malfunctioned,” obliterating any recording of the incident. That allowed the cops to claim that she was intending to run one of them over with her car when they opened fire — despite their own reports that she was driving slowly and carefully.

Jackie was shot four times. Inhumanely, cruelly, they left her restrained and alone, without medical treatment, for over 40 minutes as she and her unborn child slowly died.

Her mother, Lisa Earl, was told that justice for Jackie would be impossible to obtain because of existing Washington state law. The law then on the books required proof that an officer involved in a fatal encounter acted with malice or evil intent, making it virtually impossible to prosecute a cop for misusing deadly force. Since the cops investigated themselves in the first place, and it's extremely difficult to prove someone's state of mind beyond a shadow of a doubt, Earl was told her daughter and grandchild’s murderers would never be held accountable.

It would have been easy for Earl to give up in despair. Instead she formed Justice for Jackie, a grassroots coalition demanding reform of the laws that protected both violent cops and the law enforcement training that perpetuated a culture of “shoot first, think later.”

“Justice for Jackie is justice for all” was Lisa Earl’s mantra.

Beginning with her fellow citizens of the Puyallup Tribe, “Justice for Jackie” became a key organizing point for the Native American side of the coalition that ultimately passed I-940 in partnership with Washington state’s Black community and other allies.

Under the leadership of our diverse multitribal and multiracial political action committee, the First American Project, whose ranks included legendary activist Estela Ortega and fellow civil rights icon Larry Gossett, we put together an unprecedented campaign to visit all 29 of Washington’s federally recognized tribes to begin a dialogue about police violence and climate justice.

Fed up by waiting for establishment leaders to visit Native American communities and discuss the issues that matter, we hit the road and did it ourselves, driven by an uncompromising vision of the just future we deserve and the example of generations of fearless civil rights activists that came before us.

We visited every tribe’s ancestral lands to mobilize Native voters — and at every single stop we heard chilling stories of police violence.

On every reservation, family members had experienced the agony Lisa Earl felt during the worst moment of their life, the same agony now gripping George Floyd’s family.

And because those feelings were so pervasive, not only on reservations but in other communities across the state, I-940 easily passed, with multiple tribes reporting unprecedented turnout.

The citizenry knew the truth. We’d had enough.

Never again would a mother in Washington know the feeling of total helplessness, of complete injustice, that Lisa Earl felt that night when she learned her daughter had been killed by police.

We can accept nothing less for the family of George Floyd.

His murder must launch citizen activism, grassroots initiatives and massive legislative reform in every state in this union.

It could not be more apparent that the United States suffers from vast, pervasive and insidious institutional racism at every level of law enforcement — statutory authority, training, administration, enforcement, investigations, prosecutions and trials.

While we go after the cops who murder fellow American citizens, we must also rip out every statute that insulates them from accountability and rewrite every training course to emphasize de-escalation and the use of nonviolent force.

George Floyd, Jackie Salyers, the tens of thousands of other victims going back centuries — they cry out for nothing less.

For generations, Indigenous peoples have known this hour would come: It is a moment of inescapable reckoning and national accounting. For centuries, we have suffered with our Black and Brown brothers and sisters in agony as the targets of an undeclared race war by the worst of American law enforcement. The more than 500 tribal nations that still act as the righteous guardians and spiritual conscience of these lands will stand in protest and in solidarity until Dr. King's prophecy is fulfilled, "that one day this nation will rise up, live out the true meaning of its creed: We hold these truths to be self-evident, that all men are created equal."

All Americans, of all backgrounds, must see the truth and organize together to create a just and loving society that is worthy of the majesty of these lands, the dignity and wisdom of our ancestors who protected it, and the sacrifices made by millions of martyrs who suffered and died during the creation of this republic. We must build a new American Dream, open to all, on the ruins of the American Nightmare that we are now tearing down.

Juneteenth: Joy is not the vinyl. It’s the record player 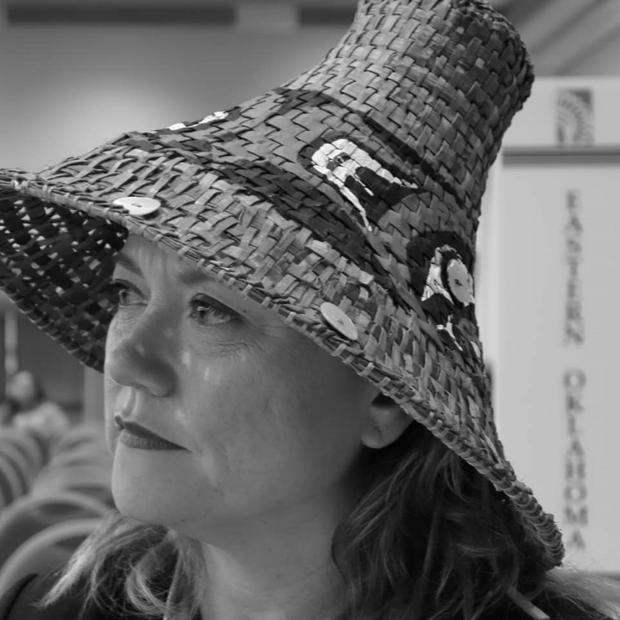 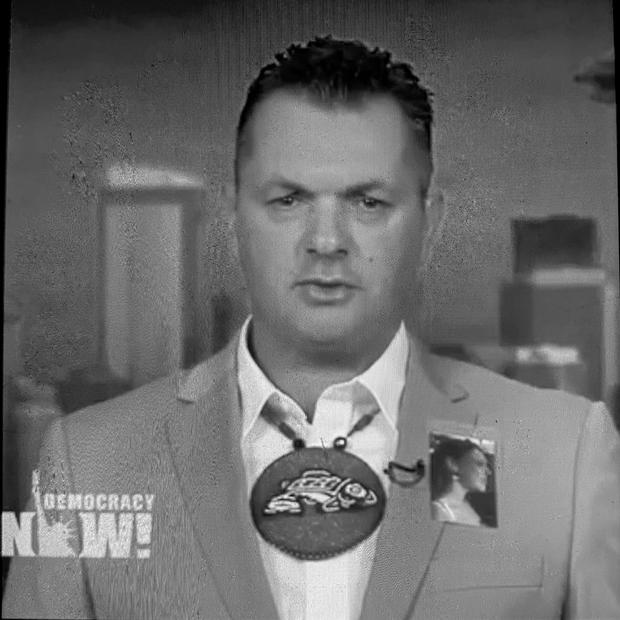 James Rideout is a Tribal Councilman for the Puyallup Tribe of Indians and uncle of Jacqueline Salyers. 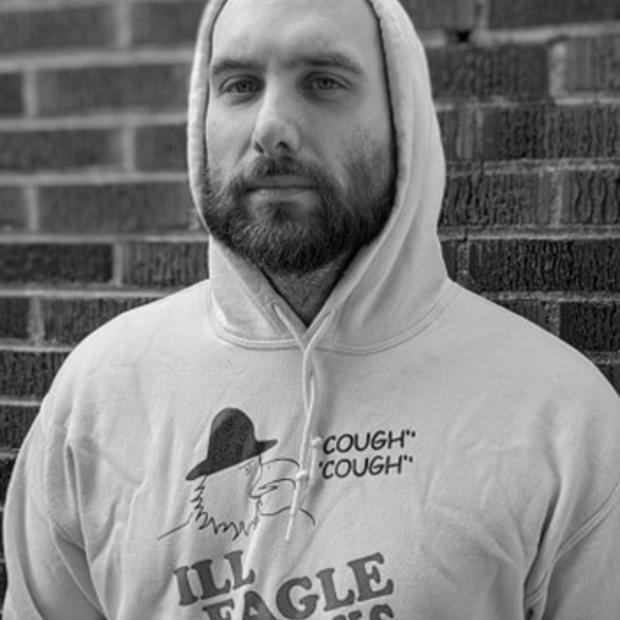