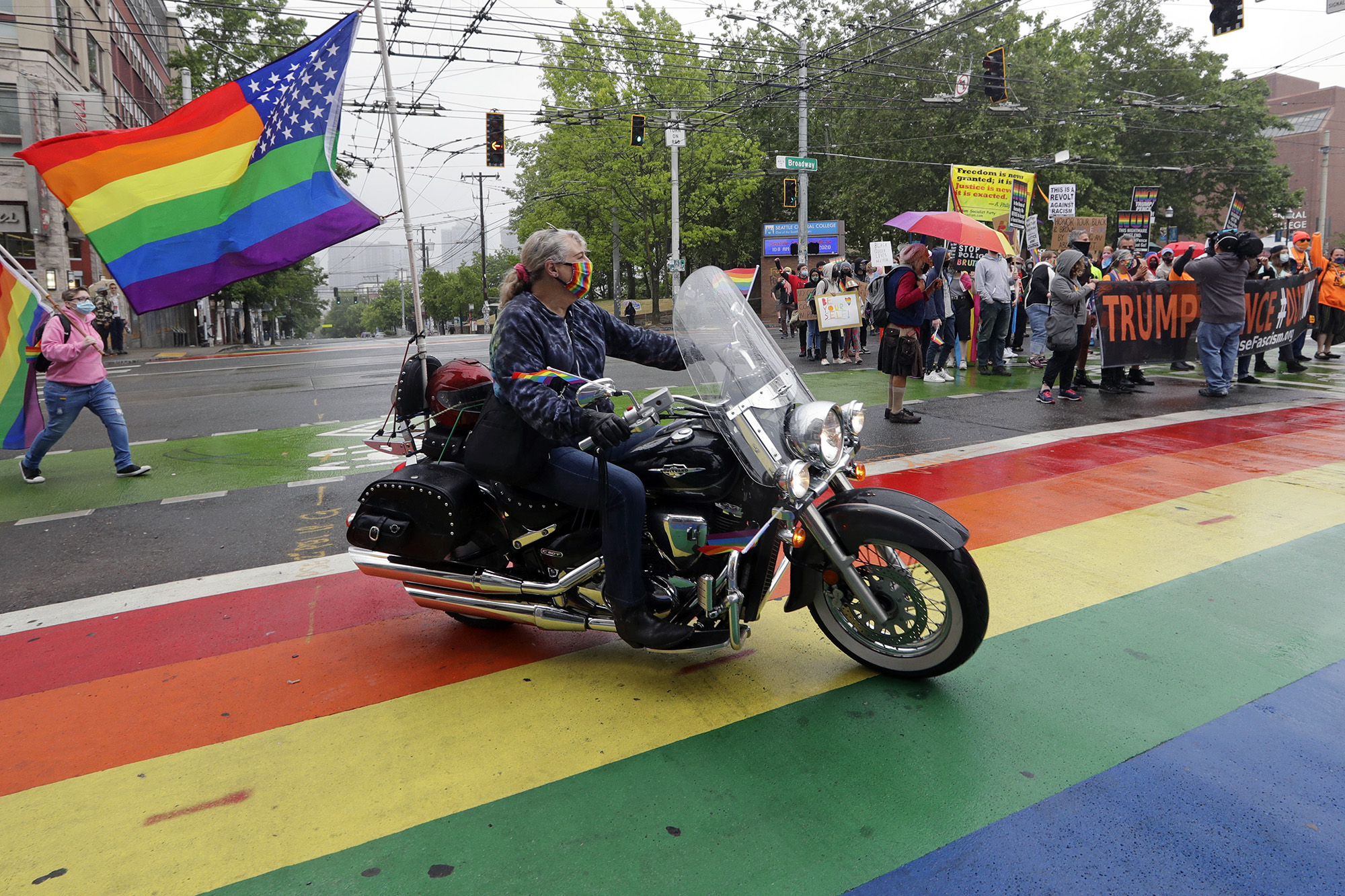 Aubrey Thomas of Dykes on Bikes leads an LGBTQ Pride march over a rainbow-painted crosswalk and heads toward an area where streets are blocked off in what has been named the Capitol Hill Occupied Protest zone to show solidarity with protests against police violence, June 27, 2020, in Seattle. (Elaine Thompson/AP)

On the day of the Supreme Court decision that Title VII of the Civil Rights Act applies to LGBT people, too, I celebrated by riffing: “My name is Katie and I’m here to say, we can’t get fired now because we’re gay.” It was a breath of relief in the midst of months of hard news. But after I got a laugh or two, I retreated back into my ongoing dilemma about the gay rights movement.

I might defend Pride celebrations to co-workers, or gently correct pronoun usage, or champion representation to my straight friends. That’s my out-of-group response. My real, in-group, response is: screw the people who make money off of us. When I see rainbow flags in bank windows, and Amazon marching in a nonpandemic-year Pride parade and gay politicians with conservative ideals, I see a proclamation of pro-LGBTQ values for marketing purposes. It’s easy to put a rainbow on a logo, but it’s work to build an organization that’s anti-homophobic, anti-racist, equitable and inclusive.

Let me be clear. Equal protections at work are long overdue. But once we’re done high-fiving and making up little songs, what else does this mean? To me, this Supreme Court decision, like the marriage equality decision in 2015, is the equivalent of putting a rainbow on capitalism. Come on in, it says, join the American dream, we promise you can work in a good job and get married and buy a house and settle down. Now gay, lesbian, bisexual, trans and gender-expansive folks (who aren’t too flamboyant, or outspoken, or gender-bending) ) can’t get fired explicitly for sexual preferences or gender expression. But what about continuing to deal with heterosexism and microaggressions? More importantly, what about protections for our friends and loved ones who don't work at jobs that are governed by the Supreme Court — our sex workers and undocumented workers and people who work under the table and people who don't work because they can't?

These decisions by the country’s high court — including marriage equality — don't fully acknowledge the humanity of queer people who live in America; they simply create a way to get more people into the institution of marriage and more people into the workforce. These decisions call for queer folks to assimilate into a heterosexist, sexist, racist, ableist country, to smooth down any radical edges and become like the norm. It bears repeating that the gay rights milestones represent access to straight privilege, and state acceptance, which are most easily accessed by those who are white, male and wealthy. Decisions like these effectively shove those at the bottom down even further, alienate the queerest queers further to the margins and strengthen this capitalist, patriarchal and settler colonial society — and because these court-directed changes are also progress, it can be confusing to speak up and speak out.

The effects of these Supreme Court decisions remind me of institutions that hold up "diversity" as one of their key values, then tell queer community members that their fear is unfounded, that their very real experiences of danger are a vague dream, that micro or macro aggressions must be perpetrated by "bad apples," ultimately sending the message that it's you who has to change. Though I can’t speak for anyone other than myself (white, openly gay and genderqueer), it’s abundantly clear that these phenomena affect all those who hold underrepresented identities, especially people of color. The system isn't changing, it's just redefining what it means to be a “good” version of a marginalized identity.

America has been through moments where it could have turned the system upside down. Now, we are in the midst of another moment of potential radical change.

Seattle is key in the current iteration of the ongoing Black Lives Matter movement, demanding that structures seen as fundamental in the United States be radically rethought or rebuilt. On June 15, 2020, it was decided that Title VII of the Civil Rights Act of 1964 applies to sexual identity and gender identity. The Civil Rights Act of 1964 has applied to Black lives for over half a century, and it has not brought justice, nor fixed inequities, nor stopped anti-Black violence. I bring up Black Lives Matter not to conflate issues, or write parallels, but because these struggles are deeply connected, and because I hope that what we learn from one fight can be applied to all.

Read more: The Supreme Court rules there is no un-queering America

From here, the country can go one of two ways.

The first path is what usually happens. New laws are made and presented as an answer, though the reforms only serve to further strengthen and calcify the very structures that the movement was fighting. Prejudice goes underground and gets baked even more insidiously into every aspect of daily life. I think about the long history of failed police reform in Seattle, culminating in SPD’s $407 million budget — and we know that in America a budget statement is a value statement; where the money goes matters. I think about how body cam requirements for police officers, common since 2014, are more often used as evidence in trials against citizens than officers. I think about how 50 years after the Stonewall riots were led by trans women of color, trans women of color are still disproportionately affected by hate violence and police violence. I refuse to accept that slow reform is the only answer, or that a little bit better is enough, or that policies are applied equally.

The other path, which is frightening to many, is to dismantle what we have and rebuild a society where those who are now on the margins are centered. What's so frightening about rebuilding, instead of reform, is that if you start considering a world without one part of the structure, the whole system starts to unravel. Strengthening existing legislation, like how this Supreme Court decision strengthens workplace discrimination laws from 1964 that obviously haven’t fixed the wage gaps, serves only to reinforce systems that have never worked. Patchwork reforms try to fix faulty frameworks. It takes immense courage and patience to make lasting change built from the ground up.

Seattle’s short legacy is chock-full of short-sighted decision making: stealing land, changing the landscape beyond recognition, persecution, segregation, allowing uncontrolled growth. Let’s change our legacy. Let’s become the city that did something new, that faced the past, made reparations, put people above profit and became a community.

In a truly queer Seattle, we would put quality of life above economic growth. No one would go unhoused, because family would have a wide and deep definition. We would put healing first, we would examine our own biases, we would share, we would develop solutions from those most impacted, we would trust that each person knows what they need, we would ask questions first. We would listen. 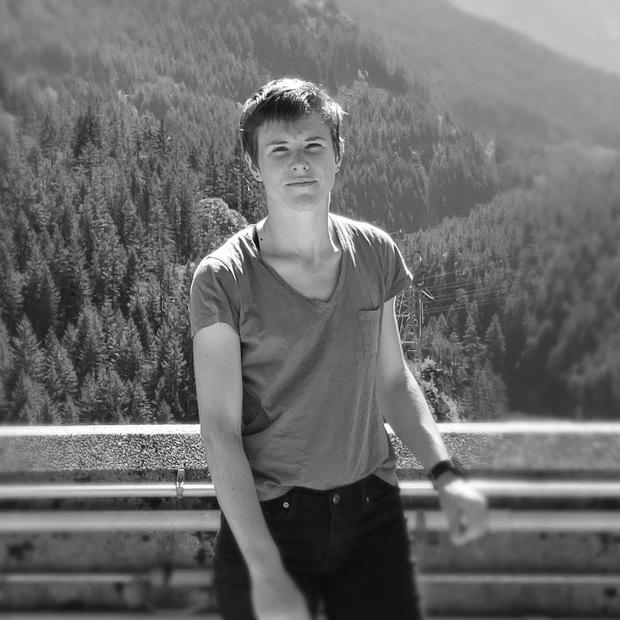 Katie Kalahan, an MFA candidate and predoctoral instructor at the University of Washington, is a writer and artist living and working in Seattle.