Less military gear, fewer officers, community investment. It all should be on the table. 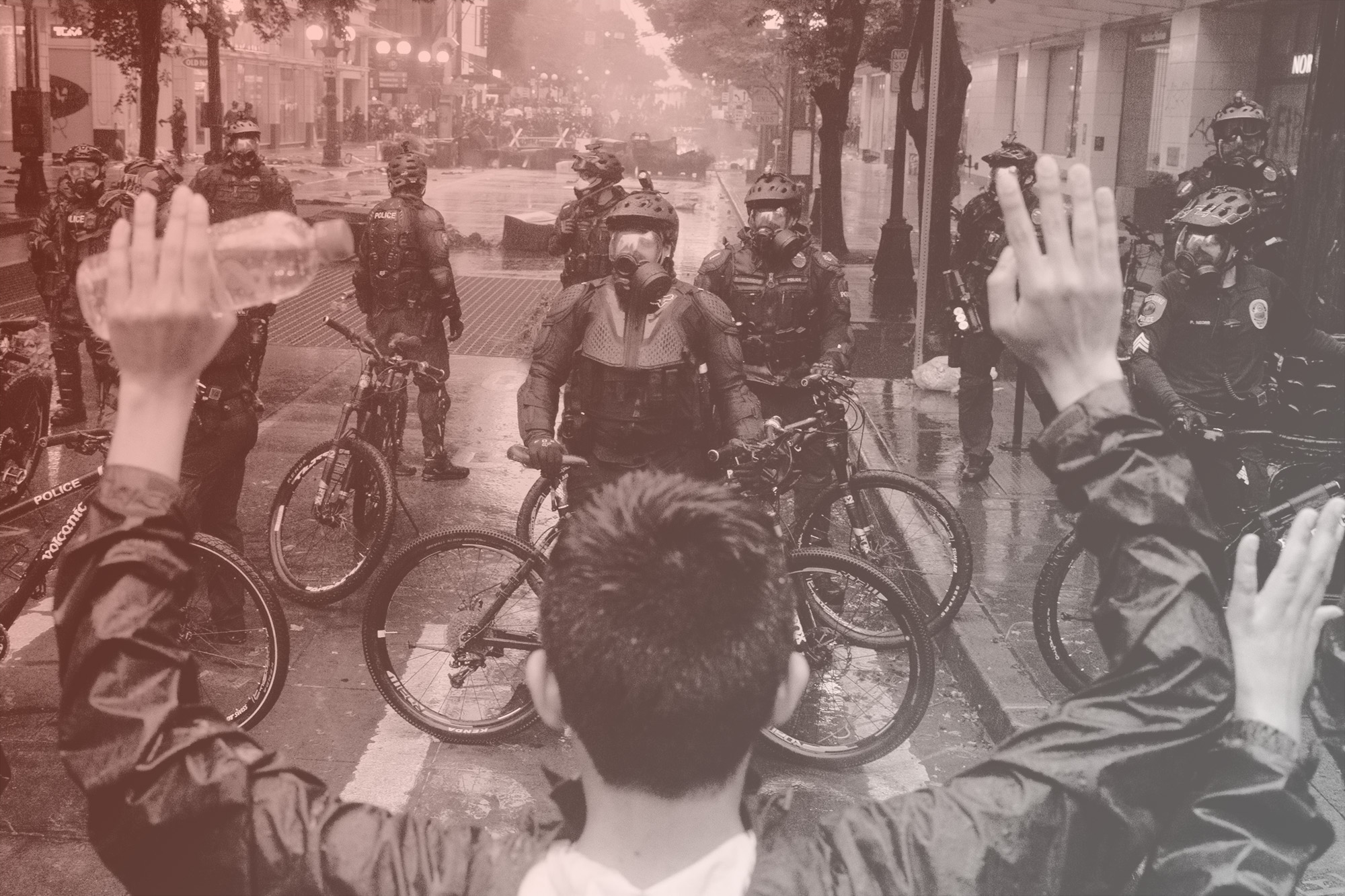 A demonstrator raises his hands in the air while exclaiming 'Hands Up, Don't Shoot' during protests across downtown Seattle, May 30, 2020. (Matt M. McKnight/Crosscut)

As the uprisings sparked by the killing of George Floyd have continued, calls to go beyond reform, to shrink or even abolish police departments, have gained a foothold remarkably quickly. Media outlets that shape mainstream liberal opinion, from The Atlantic to the New York Times, are suddenly playing host to discussions of what it would mean to defund or dismantle the police. Journalists at NPR are asking the question, “How much do we need the police?”

As local movements have formulated demands, local governments are starting to respond. On June 3, after thousands of people gathered at his residence, Los Angeles Mayor Eric Garcetti pledged to slash police funds by up to $150 million and shift a quarter billion dollars to programs that benefit communities of color. A few days later, a supermajority of the Minneapolis City Council announced their intention to dismantle their city’s police department altogether.

In Seattle, too, the winds are shifting. A new coalition called Decriminalize Seattle is demanding a 50% cut to the Seattle Police Department budget, new investments in community health and safety, and the dropping of all charges against protesters. Seattle City Council members, some of whom have been spotted on the barricades, are taking note. On June 10, the council began an “inquest” into the SPD budget, after budget chair Teresa Mosqueda pledged that she would not pass Mayor Jenny Durkan’s revised 2020 budget until the mayor cooperated in a thorough review of police spending.

So, what to cut? Ask anyone who’s been on the front lines of the Seattle protests, and they’re likely to start their list with flash-bang grenades and blast balls, “foam-tip projectiles” (which SPD uses instead of rubber bullets), tear gas and other chemical weapons — all the items SPD was temporarily barred from using by a U.S. District Court Judge on Friday, June 12. The Seattle City Council has already taken action, passing legislation proposed by Councilmember Kshama Sawant that bans “kinetic impact projectiles, chemical irritants, acoustic weapons, directed energy weapons, water cannons, disorientation devices, ultrasonic cannons, or any other device that is designed to be used on multiple individuals for crowd control and has the potential to cause pain or discomfort.” As someone who lives on Capitol Hill and likes to sleep, I’d be thrilled to see the helicopter budget zeroed out, too.

But anyone who hopes that taking away the cops’ war gear will make a major dent in their budget will be disappointed. In a normal year, “crowd control” weapons cost mere tens of thousands of dollars. This year’s budget allocates less than $75,000 to “demonstration equipment” — that’s riot gear, the most expensive piece being Kevlar helmets at over $500 a pop. For comparison, SPD spends on average over $150,000 in total payroll for a single officer, not including overtime.

Let’s take a moment to appreciate just how remarkable it is that shrinking the police force is even on the table. In the period of “austerity” following the Great Recession, Mayor Mike McGinn reduced the force through attrition, but no Seattle elected official proposed laying off active officers. In 2010, Councilmember Tim Burgess spearheaded a letter slamming McGinn merely for delaying the planned hiring of 20 new officers. That the entire council signed on, including progressives Nick Licata and Mike O’Brien, speaks to the tenor of the times. (Not coincidentally, McGinn was about to veto an anti-panhandling bill, sparking backlash from downtown interests and residents who saw more policing as an appropriate response to rising visible homelessness.) In 2013, even with crime declining and major crimes at a 30-year low, “public safety” became a wedge issue, with challenger Ed Murray promising 100 new officers to outdo the more modest expansion budgeted by McGinn.

Times have changed since 2013. Black Lives Matter burst onto the streets. Michael Brown. Eric Garner. The killings continued. Much energy and money was poured into reforms, like trainings (which appear to simply not work) and body cameras, with little result. In those years we’ve also witnessed the harm and ineffectiveness of criminalizing homelessness. At the same time, urban progressive-left movements have been gaining strength and building new grassroots infrastructure. In Seattle, that’s included the growth of groups like No New Youth Jail, Block the Bunker and the People’s Party, which are helping to anchor and guide the current protests. Now, after the breaking point of George Floyd’s killing and weeks in the streets, the powerful pro-policing bloc formed by cop unions, business interests and part of the voting public has, for the moment, been drowned out by a new rallying cry: Defund the police.

Leaving aside debates on the left about whether police abolition is possible under capitalism, or at all, let’s stick with the current movement demand of cutting the SPD budget by half. That’s a lot of officers. It may sound alarming, until you realize that U.S. police perform numerous functions for which armed personnel, trained for violent conflict, are unnecessary or unsuited — and often, unsurprisingly, cause harm. Some jobs, like directing traffic or taking down reports of stolen property, can be done by less highly trained and far cheaper workers. Other jobs, like responding to many personal crises and conflicts, and most problems arising from unsheltered homelessness call for specialized (but still cheaper) social and health workers. It turns out police spend very little of their time on violent crime. There’s a lot of good discussion starting about this right now; I’ve been enjoying Seattle tech worker Bryan Kirschner’s articles based on his past experience in community policing.

Beyond “unbundling” the police, there’s the longer-term challenge of making “upstream” investments that strengthen marginalized communities and lessen the number of crimes and crises that occur in the first place. And there’s the challenge of demilitarizing, reforming and restructuring the truncated police force that remains. There’s a strong argument for simply disbanding police departments and starting over: Institutional culture change is hard.

Defunding the police, therefore, also means redirecting those funds (and likely more) to other workers and other purposes — unwelcome news for anyone hoping that cop cuts might help with the massive revenue shortfalls cities are currently facing. But it’s the work that needs to be done. Can Seattle do all this? Can America do all this? There’s never been a better time to try.

Clarification: Due to a production error, complete information about police salaries was not included in an earlier version of this story.