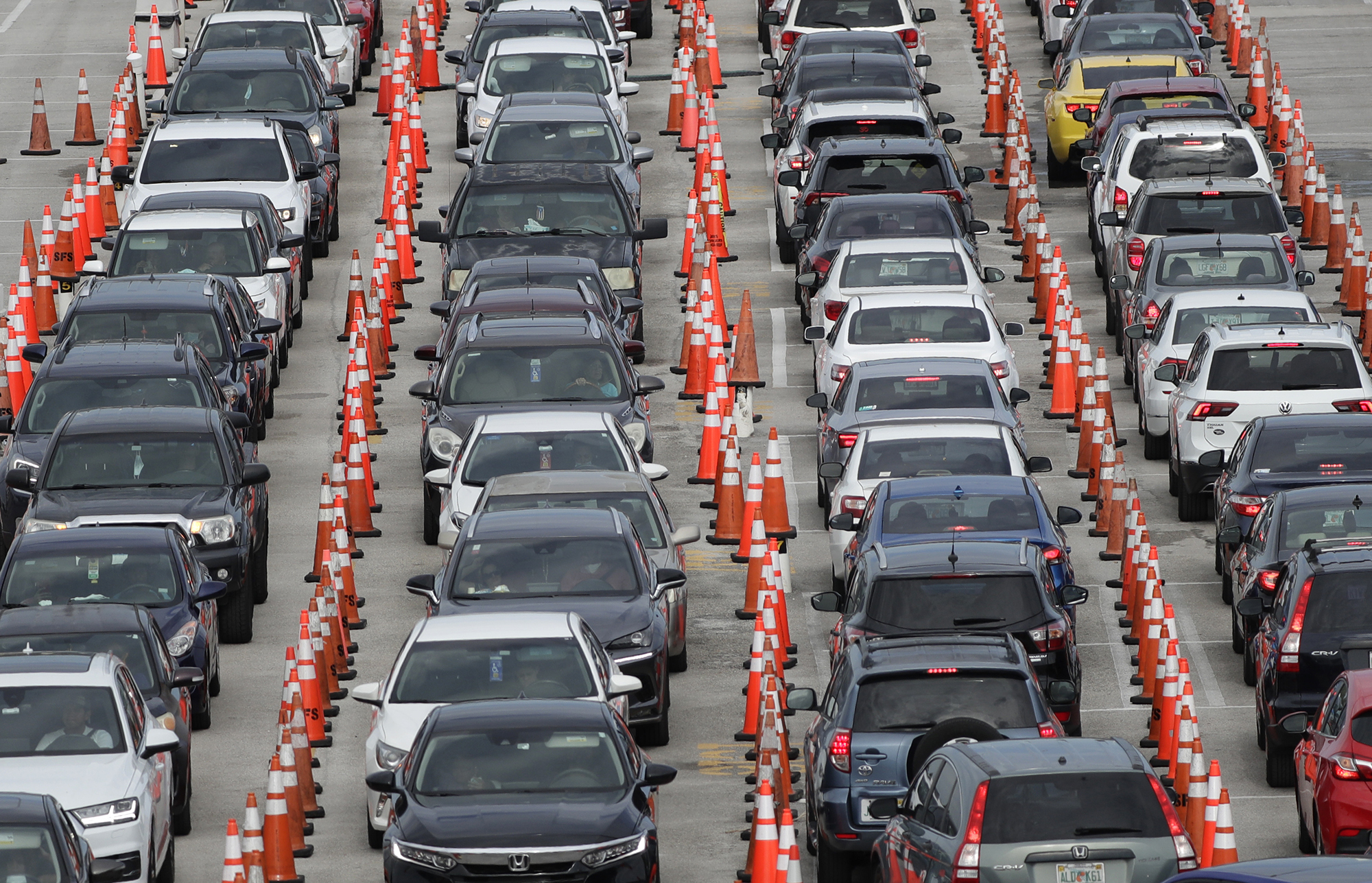 Lines of cars wait at a drive-thru coronavirus testing site, July 5, 2020, outside Hard Rock Stadium in Miami Gardens, Florida. Florida reached a grim milestone over the weekend with more than 200,000 people testing positive for coronavirus since the start of the outbreak. (Wilfredo Lee/AP)

Question: Dr. Anthony Fauci said we could see 100,000 cases per day if we continue on the path we're on. If the United States is truly past the realm of contact tracing or any of the normal containment methods actually helping, what are we left with? What does that mean for overcoming this virus?

Ah, the Abyss. (Not this one. Or this one.) Staring into it in search of ways to stanch a pandemic beats shouting into it, especially because shouting turns you into a superspreader. But you are right to heed Daddy Fauci and tremble.

With coronavirus cases surging nationally and here in Washington, we are likely a long way from seeing the bottom of the pit. A grossly inadequate national response now threatens the relative early success of regional moves like our own “Stay Home, Stay Healthy” order. The pandemic might have spidered beyond the realm where contact tracing can help us, and even though we’re testing more than ever, the U.S. is now testing only at the level we needed in March. (Don’t look at the calendar, or you’ll faint, as I did.) Pool testing could help us speed up the process, but probably not enough.

But in any emergency, the first goal is not to panic. So sit down. Take a deep breath. Hydrate. Let’s leave our worries about Aunt Tammy in Texas or Uncle Frank in Florida for a few minutes and look at some regional bright sides. Though cases are on the rise in Washington, they are nowhere near the March/April peak. Hospital capacity here remains robust, and more than half of the new infections are occurring in generally healthy people between 20 and 39. As such, hospitalization rates are actually lower now than the first part of June, even though positive diagnoses rose.

Related: A psychotherapist tries to answer a question all our bodies are asking: COVID or NOVID?

OK, that’s all the good news I’ve got, so chug that water (or brown liquor, be real) and put your mask back on. An increase in deaths almost always lags behind case increases, and as long as cases go up the chances for the virus to spread and kill more people go up, too. It can and will come back to bite us hard. Coronavirus? More like Corleonevirus.

So what tools remain? Herd immunity — the idea that a high enough proportion of the population has developed immunities to render contagion unlikely — would be far too costly. Even by conservative measures, some experts think 5 million people would have to die for us to reach the 70% to 75% infected population threshold for this to work. Also, some worrying studies coming from China indicate that immunities might disappear after a few months. Gonna call the herd option a big nope.

A workable vaccine by the end of 2020 is our next shot from half court. While Daddy Fauci and others have expressed some optimism at the prospect, serious hurdles remain: The current international, multibillion-dollar effort is still akin to landing on the moon perfectly on the first try (which, by the way, didn’t happen). What’s more, some vaccine trial recipients have experienced extreme side effects, like fainting or high fevers — and that’s in healthy human guinea pigs, not immunocompromised folks who would need the vaccine most.

Additionally, it’s not clear the antibodies produced would stop future infections. As of now, it’s possible antiviral drugs and lab-produced antibodies show more promise: Timelines for testing drug cocktails like these are faster, and they could treat vulnerable people in the early stages of the disease, prevent infection and help people clear infections faster. But the disease would still circulate in the human population until we get a vaccine.

But now I’ll ask you to stare into the abyss yet again, and really squint hard. Can you see it, glowing dimly at the bottom? Ah, yes — there it is: a mask.

Until those ivory-tower eggheads up their jumper, it’s up to each and every one of us to stay vigilant, no matter how dead tired we are of this pandemic. Masks, physical distancing, washing hands and being extremely cautious about some of the things that make being human bearable (hugs, drinking brown liquor in cramped public places with friends, observing various sportballs with strangers) will save lives and buy Science™ the time it needs to save us.

Right now, each of us has the power to control our own behavior — it might be the only thing we have control over. And for now, even Daddy Fauci agrees it’s the most powerful tool we have.