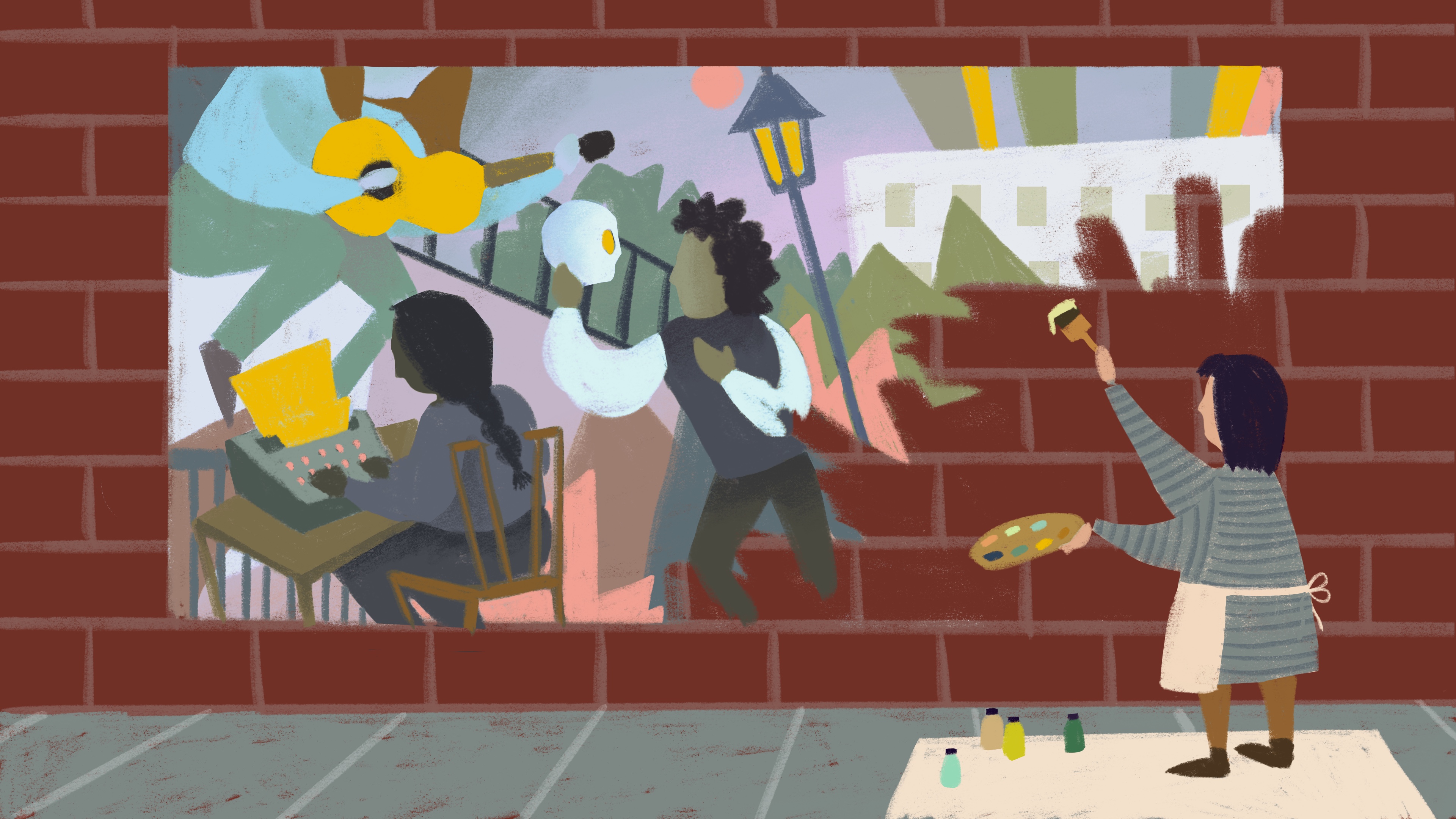 Someday, people will once again sit down or stroll together in large groups to watch, listen and get their artistic fixes.

On stages around Puget Sound, musicians will strum stringed instruments and tickle the ivories for a packed house. Dancers will leap and spin. Actors will emote and cavort, projecting all the way to the back row. Art lovers will linger in galleries, and film buffs will be enthralled by movies projected onto giant screens.

When coronavirus cases finally plummet, and a vaccine is available, an array of live cultural experiences will surely return in some form, as has been true after every plague in recorded history. The question is when, and how?

How do we revive a sector that struggles to stay afloat in the best of times, and is on life support now that we cannot gather elbow to elbow to breathe in the same artistic oxygen?

Legions of gifted professional artists are unemployed and underemployed even in boom times.  Along with paying gigs (concerts, plays, commissions, etc.) most also rely on additional part-time work — often in the restaurant/hospitality or education sectors, which are also hard hit by the COVID-19 pandemic. That’s a double, sometimes triple, whammy of layoffs for arts workers.

So I have a proposal. It boils down to jobs, jobs and more jobs. A massive national job program for industries devastated by the pandemic — in this case, the arts. A modern makeover of a Great Depression-era initiative providing living wage jobs for visual, literary, performing and media artists, funded largely by the federal government. A program that would dramatically change the way nonprofit arts institutions operate and reweave the cultural fiber of our society.

Is this the very first priority of a government recovering from a devastating health crisis and financial crash? Of course not. People need to be medically healed, fed, housed and put back to work in many sectors (including, by the way, journalism).

This debilitating, isolating historical moment should make us rethink our attitudes, priorities and national policies with regard to our criminal justice system, health and education infrastructure and physical environment. Similarly, the American arts sphere shouldn’t merely hope to restore the “old normal” when it could instead be re-envisioned and rejuvenated.

Sound like pie in the sky? Just another tax hike and bureaucratic boondoggle? Hear me out.

Last year, before COVID-19 reached a Kirkland nursing home and spread exponentially, the arts were not just a welcome enhancement to life in this region, but a meaningful economic force. A 2019 report by Seattle philanthropic organization ArtsFund states that the arts and culture industry in Washington had a $2 billion impact on our state’s economy in 2018, generating 30,721 jobs, $859 million in labor income and $87 million in revenue from various taxes.

Nationally, in 2016 (the latest full set of figures available), the arts employed 5 million people and injected a hefty $804.2 billion into the overall economy, as reported in a study by the National Endowment of the Arts, the federal arts agency. That was 4.3% of our gross national product — an astonishing $60 billion more than construction activity and $227 billion more than transportation and warehousing.

Plus, arts and culture is an industry that generates additional spending — on everything from parking to dining to babysitting.

Another added benefit: Those dollars are from a basically “clean” industry, a labor-intensive field with little negative environmental impact and which serves and enriches millions of Americans across every state. According to a cascade of studies (as well as gut instinct), the arts stimulate the intellect, broaden one’s perspective, provide a healthy outlet for protest, promote empathy and, oh yes, entertain us.

And yet state and federal governments have for decades been starving the nonprofit arts, leaving each institution to cobble together budgets with reasonably priced admissions, memberships and other earnings, supplemented by grants that depend on the changeable whims of politicians, private foundations and individual givers.

Compared with other prosperous industrial nations, the U.S. spends a pitiful amount, frankly, on arts and culture. In 2019, the U.S allocated $155 million to be split between arts and humanities groups — which amounts to 47.4 cents per capita. By contrast, in recent years Germany has spent $85 per person on the arts alone, Canada $46 per citizen, and Finland $95.

Today these and other countries are looking to preserve their cultural sectors during the pandemic with generous grants — not loans — like the $2 billion in new arts funding the United Kingdom recently pledged.

But will America go for increased governmental arts support? Not likely, if it’s up to the current administration. President Donald Trump has shown zero interest in even preserving the modest amount allocated to the NEA in recent years. Last year he wanted to zero out the entire National Endowment for the Arts/National Institutes of Health budget. But Congress has refused to do that, and the citizenry seems to feel the funding should be ramped up, rather than merely maintained. In a recent Americans for the Arts poll, 58% approved of doubling the NEA’s current budget. (Only 33% disapproved.)

Again, I’m talking about job creation — a popular idea (and a necessity) in a time when the unemployment rate has tripled from what it was in June 2019, and when many Seattle arts institutions have canceled entire seasons of programming and laid off or furloughed most of their workers. If an array of stable jobs were underwritten by federal grants to U.S. theaters, dance companies, museums, galleries and so on, arts groups would still be responsible for raising additional money through ticket sales and other sources. But this would guarantee artists a place on the payroll and result in a bounty of new works.

And it wouldn’t require reinventing the wheel.

In 1973, President Richard Nixon signed the Comprehensive Employment and Training Act into federal law. Based on a San Francisco program initiated during an economic slump, CETA provided low-income and unemployed workers training and fulltime work in nonprofit and public agencies for up to three years per job. At its peak, the program employed nearly 700,000 Americans.

Those hired worked in many sectors — from social services to asbestos removal, and frequently in the arts. Before the Reagan administration ended it in 1983, CETA provided valuable on-the-job education to communities throughout the country, and helped cultural groups of varied types and sizes solidify and expand. (In 1980, I had a CETA job as director of Theatre Bay Area, a  San Francisco nonprofit arts resource center then called Theatre Communications Center of the Bay Area.)

But CETA was inspired by a far more ambitious model: the Works Progress Administration, instituted in 1935 during Franklin Delano Roosevelt’s presidency. It employed millions of men and women impoverished by the Great Depression.

Many Pacific Northwest roads, bridges and public buildings currently in use were constructed with WPA labor and funds, including the University Post Office, the Ballard Bridge and the Everett Public Library.

But the WPA wasn’t only about pouring concrete and laying down asphalt. Its Federal Arts Program put artists of all sorts on the national payroll. They produced myriad theatrical shows, musical events, murals and books, and created more than 100 staffed community art centers (including the Spokane Art Center). The highly influential painters Jackson Pollock, Diego Rivera and Mark Rothko, and Washington’s Mark Tobey, Jacob Lawrence and Morris Graves, were among some 10,000 visual artists subsidized by the WPA. (A rich sampling of local work is currently featured in the exhibit Forgotten Stories: Northwest Public Art of the 1930s at Tacoma Art Museum, viewable via video tour.)

The agency’s Federal Theatre Project employed future stage luminaries like Orson Welles, Arthur Miller and Langston Hughes. The Federal Writers Project hired such scribes as Zora Neale Hurston, who documented the oral histories of elder African Americans who had once been enslaved. Seattle’s Negro Repertory Company, a vital Black ensemble, was established here as part of the so-called Negro Units of the Federal Theatre Project.

Certainly, there were political wrangles over the kind of artworks subsidized and the messages they conveyed. And the WPA lasted only until 1943. But the cultural and other contributions it made are incalculable and lasting. While different times call for different strategies, it could be a good model to build on.

Consider how the program affected American theater alone. As University of Washington professor emeritus Barry Witham wrote in his book The Federal Theatre Project: A Case Study, between 1935 and 1939, the U.S. “provided more than $45 million [an equivalent of about $640 million today] to pay the salaries of actors, directors, designers, technicians and others so they could produce plays. Classics, new works, marionette shows, dance programs, even circuses were performed under the banner of Federal Theatre.”

Sure, that was then and this is now. It would require public will, and probably a more broadly sympathetic Congress and president to champion it. But our “now” demands big injections of economic Vitamin B, just as was necessary during the Great Depression. And our “tomorrow” needs a cultural life that isn’t entirely dependent on computer screens.

Think what even $5 per citizen — funneled to the Seattle Repertory Theatre and ACT Theatre, Spectrum Dance Theatre and Earshot Jazz, the Northwest African American Museum, Hugo House, Urban Artworks, and other organizations that hire artists — could do to fuel a creative surge in our community.

It would take some persuasion.  But it would be a whole lot of bang for the buck.