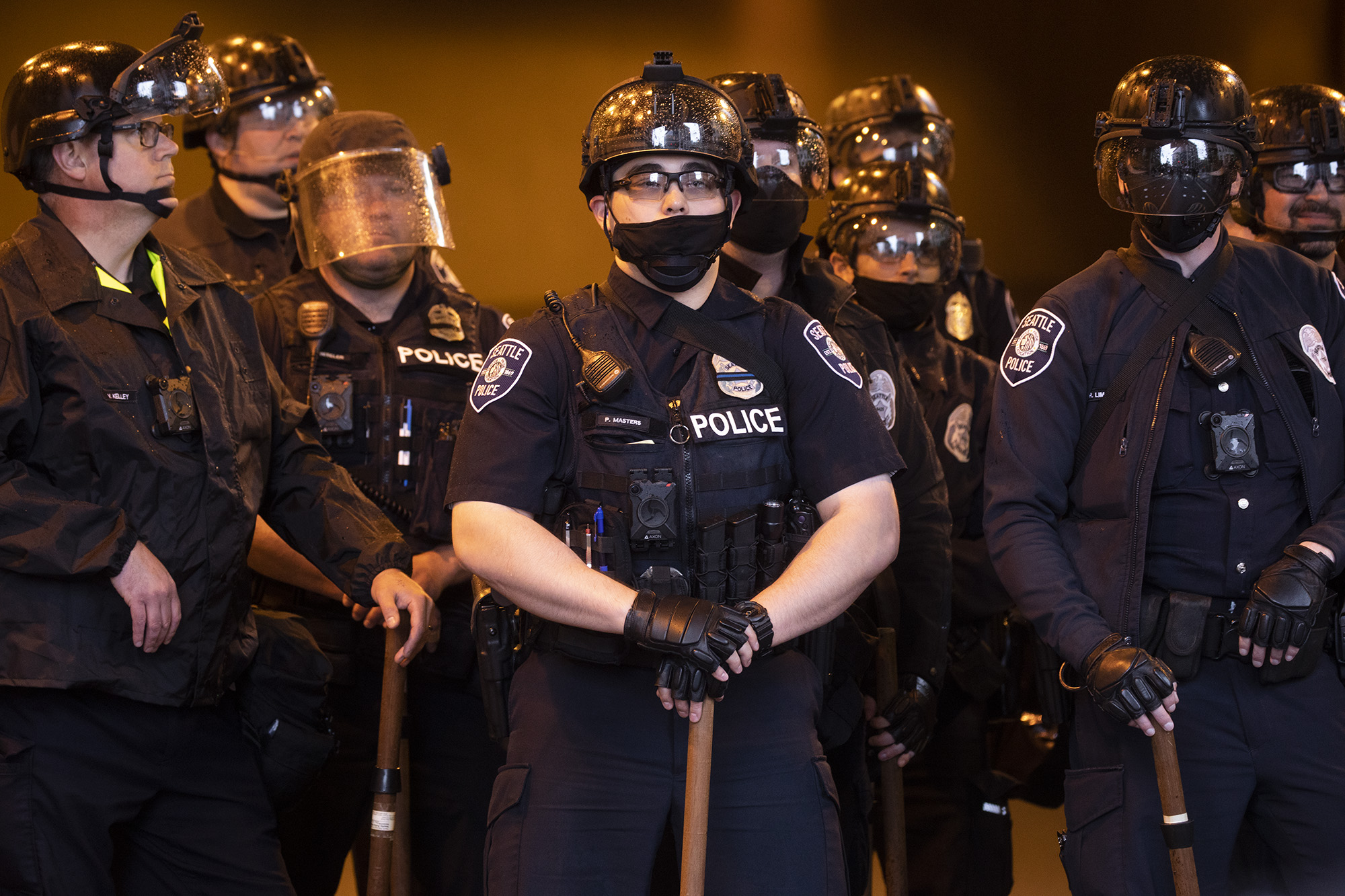 Seattle Police Department officers stand near a downtown onramp to Interstate 5 during protests across downtown Seattle in the aftermath of the killing of George Floyd by Minneapolis police, May 30, 2020. (Matt M. McKnight/Crosscut)

Washington state lawmakers plan to pursue a broad range of police reforms the next time they meet, including possibly limiting police use of tear gas and chokeholds.

The protests that erupted worldwide after George Floyd, a 46-year-old Black man, died under the knee of a Minneapolis police officer have created new momentum for police accountability measures at the state Capitol.

“If people are willing to march in the street for 26 days because we are continuing to kill African American men, and African Americans in general, then we need to take action,” said state Rep. Debra Entenman, D-Kent, who chairs the Black Members Caucus in the state House.

Many lawmakers said the need to reform policing is so dire that it will be a leading topic if the Legislature meets in an emergency session this year to address the state budget.

Even if no special session is held in the coming months, police reform will remain at the top of legislators’ agenda when they convene for their scheduled 105-day session in January, key lawmakers said.

“This is just one aspect of the question of race in our society — but it is the most acute and the most high-stakes issue, because it really is about life and death,” said state Rep. Roger Goodman, D-Kirkland, who chairs the House Public Safety Committee, which deals with law enforcement.

The reform ideas under discussion are wide ranging, with many coming from community groups and family members of people killed by police.

Some of the proposals Goodman considers “low hanging fruit” include limiting the purchase of military equipment by police, as well as potentially banning police use of chokeholds and other neck restraints.

Many lawmakers also want to restrict police use of teargas and rubber bullets during protests, he said.

Other priorities, such as establishing an independent office to review investigations of police misconduct, may take longer to hammer out, Goodman said.

State Sen. Jamie Pedersen, D-Seattle, said one of his ultimate goals is to ensure that officers accused of misconduct can’t evade an investigation by simply resigning.

That would mean beefing up the process for decertifying officers, along with ensuring that police agencies complete misconduct investigations and report the findings to the state Criminal Justice Training Commission, which handles officer certifications.

“Right now, what happens is the discipline process starts within the department against a cop. And if the officer kind of sees the writing on the wall that he or she is not going to prevail, the officer resigns in lieu of discipline,” said Pedersen, who chairs the Senate Law and Justice Committee.

That means “somebody who resigns in lieu of discipline in Renton can go to Tukwila and get hired, or Federal Way,” Pedersen said.

“That’s the kind of thing that we need to figure out how to stop,” he said.

The Washington Association of Sheriffs and Police Chiefs (WASPC) said it is on board with some of those reforms. In a June 24 letter to lawmakers and the governor, leaders of the police group supported changing state law so officers can lose their certification for excessive use of force, repeatedly breaking rules or “other serious breaches of the public’s trust.”

The attorney general and WASPC also agree on the need to require all law enforcement agencies in Washington to report incidents where officers use deadly force. Right now, that data collection and reporting is lacking, Ferguson says.

There’s also a need for a process to review use of force investigations after they are completed, to make sure that existing laws and protocols are being followed, according to both WASPC and the attorney general’s office.

A recent report in the The Seattle Times highlighted how the independent inquest process broke down in the case of Manuel Ellis, who was killed in the custody of Tacoma police in March.

Many lawmakers and Democratic Gov. Jay Inslee want to set up a new, independent oversight agency to investigate allegations of deadly police misconduct. But creating such an agency would cost money, which may prolong discussions during the current state budget crisis.

Other police accountability measures could also get complicated if they require changing the terms of police union contracts.

State Rep. Brad Klippert of Kennewick, the ranking Republican on the House Public Safety Committee, said so far he hasn’t been involved in the conversations with majority Democrats about police reform. He said he would have to see the language of specific proposals to form an opinion about them.

Still, he said any independent body that investigates officers “should have someone who is actually experienced in law enforcement” serving on it.

State Sen. Manka Dhingra, D-Redmond, said one thing she wants to do is empower officers to intervene when they see their colleagues misusing their power.

That would mean outlining officers' duty to intervene when they see an abuse of force or other misconduct, as well as training officers how to step in, she said.

In Minneapolis, multiple officers stood by as officer Derek Chauvin kneeled on Floyd’s neck for about 8 minutes, even as the dying Floyd cried out, “I can’t breathe.”

Dhingra said she thinks the Legislature will approve new standards for peer intervention training, if not approve rules for when officers must intervene.

Inslee is also interested in legislation that would require law enforcement to report misconduct witnessed by fellow officers, his office said.

One thing lawmakers aren’t pursuing aggressively at the state level is the idea of defunding the police. Goodman, the House Public Safety Committee chair, said that’s largely because most police funding comes from local government, rather than the state.

However, in the future lawmakers hope to boost funding for behavioral health services and housing, which Goodman said could help reduce the burden on police to address homelessness and mental health crises.

House Minority Leader J.T. Wilcox, R-Yelm, said he, too, is interested in “creating a system that is more selective about who needs to respond," so that police aren’t taking every call.

The idea is “making sure the right services are responding based on the crisis — not just because you call 911 and you get cops,” Wilcox said.

State Rep. Jesse Johnson, D-Federal Way, said he thinks this year feels different when it comes to the potential to make real progress on police reform.

“The reality is there is just so much disproportionality right now when it comes to health outcomes — and you add in the economy and police brutality, and enough is enough,” Johnson said. “I think people are just tired of it.”

“I think this is the best time to get some of this done,” he added. “It’s unfortunate it comes at the hands of some people in our state losing their lives, but we have an opportunity to make really positive change on this issue.

“I think there’s a lot of energy behind it.”