Sidelined by COVID-19, Seattle's climate goals are back on the table, thanks to community and city council support. 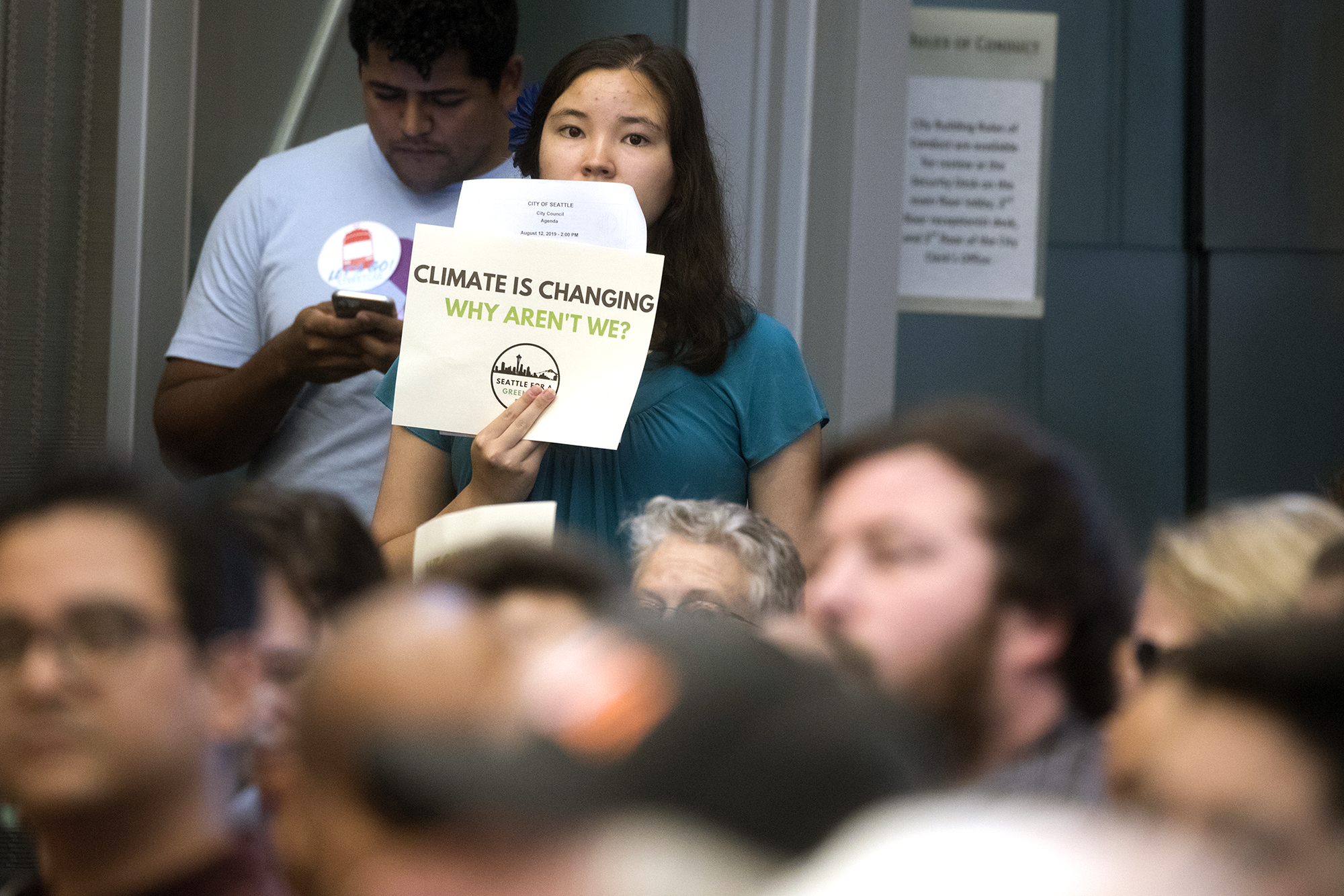 In the distant era known as summer 2019, the Seattle City Council signed a pledge endorsing a Green New Deal that called for big changes to the city’s energy, housing, transportation and health systems. On the first page, one line was printed in bold:

“We will work with you to identify progressive funding sources at the scale needed to bring about these transformations.”

The “you” in question were community groups advocating a Green New Deal, and members of the city council did meet with advocates last year and passed Green New Deal initiatives. But much of what was promised never occurred, as the economic fallout from COVID-19 led the city and mayor’s office to pause Green New Deal work. But now the city council and community advocates are focusing on that work once again — with help from a new progressive business tax the council passed July 6 by a 7-2 vote.

The Green New Deal was initially conceived as a set of national policies loosely organized around addressing climate change and economic inequality together and was popularized by U.S. Rep. Alexandria Ocasio-Cortez, D-New York. It gained local momentum in 2019 when advocacy groups Got Green and 350 Seattle came together under the banner of Seattle for a Green New Deal.

In September 2019, the city council passed an ordinance to create a community-led Green New Deal Oversight Board. Mayor Jenny Durkan pledged to start her own Youth Climate Council and signed an executive order in January directing city departments to create an interdepartmental team to work with these two organizations, make budget recommendations and report back to the city council by July 1, 2020.

But as of now, neither the oversight board nor the youth council exists, and the interdepartmental city team hasn’t convened yet, either. The city points to the budget crisis caused by COVID-19 as the reason the work hasn’t started.

“We were not staffed up to take on the Green New Deal work right when the legislation passed … but a new position was added with the legislation and we were in the process of hiring for that when COVID (and the hiring freeze) hit,” said Sara Wysocki, communications director of the city Office of Sustainability and Environment.

Wysocki says the city is reviewing “other options” to give the community oversight, and that the Green New Deal is still a priority. But the mayor’s revised 2020 budget, released June 23, did not include restoring funding for the position that would allow the oversight board to get started. Chelsea Kellogg, senior communications adviser to Mayor Jenny Durkan, says that the “position was eliminated to help fill the budget hole.”

“The Office of Sustainability and Environment plans to work with our environmental justice committee to move forward with a similar body of work,” Kellogg says.

“I think it’s a fair assessment to say that if this was a priority of the mayor’s, it would have happened — and if they were deeply committed, they would be reaching out to the community to make this work,” says Jess Wallach, an organizer with 350 Seattle. “We are deeply committed to seeing the Green New Deal Oversight Board enacted as envisioned. The city made a commitment to community-driven Green New Deal policy.”

Today’s unanimous budget committee vote to use a slice of the revenue from the new JumpStart Seattle payroll tax to bring back the oversight board coordinator position represents momentum for the Green New Deal, but that action can go only halfway. Although the council can make money available, it’s ultimately up to the mayor to decide to use it — and last year, the mayor’s office failed to do so even though council apportioned the funds.

What Wallach says is different this year is an increased sense among advocates and community members that city spending and budgets are “moral documents” that demonstrate leaders’ priorities — and they hope this time, mayoral action follows promises.

A seat at the table

The JumpStart spending plan will fund a host of other Green New Deal investments in addition to the oversight board. But for many advocates among the 33 community organizations who requested that the City Council revive its funding, the board remains important not just because it represents the first tangible step toward a Green New Deal, but because of whom it empowers.

Debolina Banerjee, a climate policy analyst with Puget Sound Sage who last year advocated the creation of the oversight board and currently sits on the city’s environmental justice committee, says it’s important that people most affected by racial and environmental injustices have a formal seat at the table. That could include people living in neighborhoods along the Duwamish River, long designated a toxic Superfund site, or members of tribes with treaty ties to the area, for whom there are dedicated two seats on the board.

“Our focus was and will be for the Green New Deal to be guided by frontline communities,” says  Banerjee. “[It’s] an absolute necessity. Our vision is to have a fair and just Green New Deal.”

Banerjee and other organizers met multiple times last year with former Councilmember Mike O’Brien, who sponsored both pieces of Green New Deal legislation last year before leaving office at the end of 2019. O’Brien compares the frustration he has heard from organizers about whose voices were being heard and who is making decisions with sentiments he’s heard recently from the Black Lives Matter movement.

“There was a strong sense from community members that passing the resolution and signing executive orders and co-opting the Green New Deal brand but having the same people in leadership that have failed to do much significant over time would lead to a similar path, where you get a progressive politician but nothing actually changes on the ground for people who are affected,” O’Brien says. “So a lot of thought went into that oversight board.”

For activists like Matt Remle, co-founder of Mazaska Talks, there’s no time to waste. A 2018 report from the United Nations Intergovernmental Panel on Climate Change concluded that humans have only until 2030 to limit global warming in order to avert outright climate catastrophe, and the oversight board was given the responsibility to plan to make Seattle carbon-pollution free by that date.

“No, we’re not on a path at all to be fossil-fuel free by 2030,” says Remle. “We’re six months into 2020, and if Seattle was really keeping with this timeline, it’s already [down to] 9.5 years to reduce these emissions.”

The city’s two biggest sources of greenhouse gas emissions come from transportation and buildings, and as KUOW reported last year, city emissions are on the rise again, even though six Seattle mayors have pledged carbon reduction since 2001.

Funding for the future

In 2021, revenue from the JumpStart tax — which is being assessed on businesses with annual payrolls over $7 million — will go primarily toward COVID-19 relief. In the following years, the spending plan would allocate most of the $214 million the measure is expected to generate each year to affordable housing. The plan’s architects see that as interconnected with climate goals.

“The backbone of the JumpStart proposal is emphasizing the creation of more affordable housing in the city and that, by default, is a Green New Deal priority,” says Councilmember Teresa Mosqueda, the legislation’s sponsor.

Mosqueda points out that a lack of affordable housing in the city leads to more people commuting from the suburbs and burning fossil fuels as they drive. The housing built with JumpStart Seattle funding will also require fossil-fuel-free construction.

Additionally, starting in 2022, the spending plan will send 10% of the total revenue anticipated from the tax — about $20 million per year — specifically towards Green New Deal work. This will include switching existing houses from fossil fuel heating to electric, weatherizing houses and making homes more energy efficient.

The JumpStart legislation wasn’t the city council's only attempt this year to fund affordable housing and energy transition with progressive taxes. The Tax Amazon proposal sponsored by Councilmembers Kshama Sawant and Tammy Morales envisioned a tax even more broadly applied than the one that ultimately passed. It would have generated an estimated $500 million per year, with revenue split 75% for affordable housing and 25% toward Green New Deal work.

Many of the same advocates who found common ground last year while pushing to create the oversight board reconnected as each of these tax proposals gathered momentum. Remle and 350 Seattle got behind the Tax Amazon initiative this winter, while groups including MLK Labor favored the JumpStart proposal. Once it became clear the JumpStart version would pass, MLK Labor, 350 Seattle and others joined together to push for Green New Deal inclusion.

“We already met, we had an email list, we’d been having hard conversations already,” says Katie Garrow, deputy executive secretary of MLK Labor.

Garrow recognizes that transitioning to a carbon pollution-free economy means that some fossil fuel workers will lose their jobs, and she says funding worker retraining must complement the establishment of good, stable jobs in fields like clean energy.

“We want to be a part of lifting up the standards in the new green economy,” Garrow says.

Now that the city council has once more chosen to fund Green New Deal work, the responsibility for follow-up action on the oversight board returns to the city and mayor’s office. Those in favor of the Green New Deal don’t find the pandemic a convincing reason for delay.

"Not appointing the Green New Deal Oversight Board is not achieving anything except exacerbating a previously existing problem,” says Councilmember Kshama Sawant.

Update: This story was updated at 4:22 p.m. on July 15 to clarify that the Seattle City Council budget committee voted on the amendment to the JumpStart tax spending plan that would reauthorize funding for the Green New Deal Oversight Board, not the full council. The budget committee includes all 9 sitting councilmembers. The full council will vote on the amended spend plan on Monday, July 20, 2020.